Accessibility links
As Netflix Shifts To Streaming, Customers Find A Few Holes Costly licensing fees and content deals with other companies limit Netflix's ability to offer all the movies and TV shows for streaming that its customers want. Experts say the company must find the balance of offering enough variety at the right price to keep up its popularity. 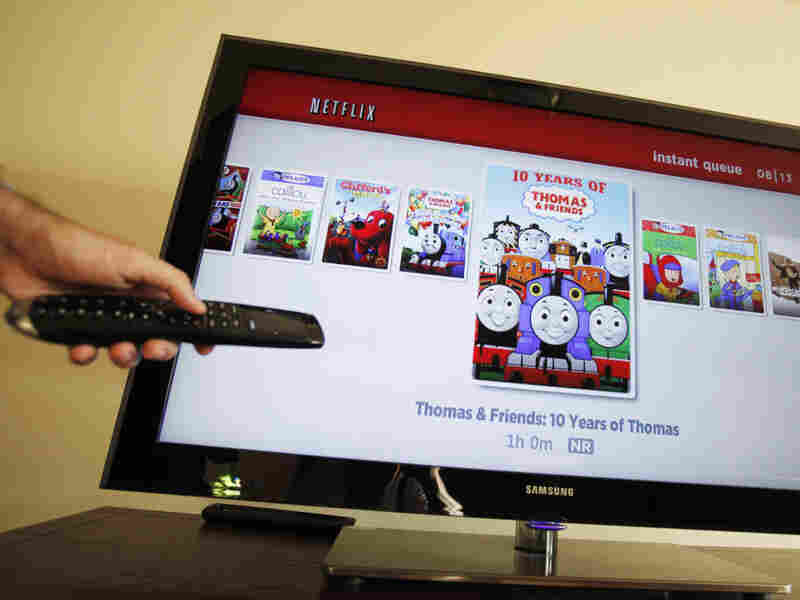 Netflix boasts that it's the place to go for users to "watch instantly." But licensing fees and deals with other companies prevent it from streaming a good deal of its content online. Paul Sakuma/AP hide caption 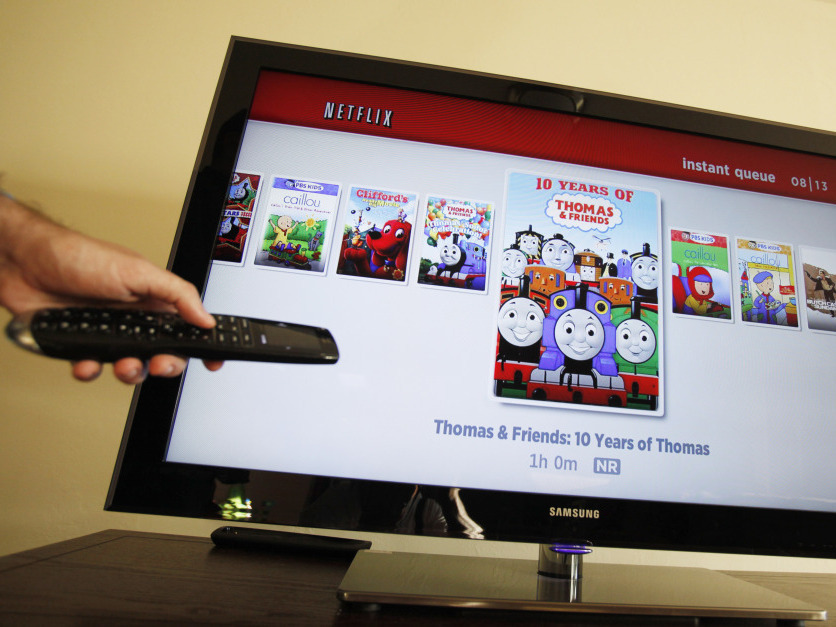 Netflix boasts that it's the place to go for users to "watch instantly." But licensing fees and deals with other companies prevent it from streaming a good deal of its content online.

It seems like Netflix is on top and it's everywhere. Users can watch it on their computers, game consoles, smartphones, or Internet-connected TV. Netflix boasts some 25 million subscribers, which is more than big cable companies like Comcast and Time Warner.

Although the company started as a mail order DVD service, these days it does the lion's share of promoting for its online streaming service. The company says it's the place to "watch instantly."

Most Netflix users love watching movies and TV programs whenever they want, but they can also tell you that the experience has some big gaping holes in content.

Take Marlene Saritzky, Tom Corwin and their seven-year-old son Jake. Saritzky says they canceled their DVD-by-mail subscription more than a year ago.

"But, I'm sure there's a DVD under a couch cushion somewhere that has never been returned," she says with a chuckle. "Sorry, Netflix."

Now they don't have to worry about lost DVDs. For $7.99 a month they stream TV shows on the MacBook Pro. Their son Jake loves to watch Avatar:The Last Airbender, an animated program from Nickelodeon about a boy with special powers.

The adults have made some great new discoveries too. "Downton Abbey is a great series," Saritzky says. "There's only six episodes now; I think I watched them all in two days."

Saritzky says she can't wait until season two comes out.

Back in the days when they were losing DVDs under the couch, Corwin and Saritzky knew they could always count on Netflix for a copy of anything they wanted, from the most obscure foreign film to the latest blockbuster DVD release. But with the streaming service there are big gaps.

A disappointed Jake couldn't find Harry Potter and the Sorcerer's Stone from 2001.

And Saritzky and Corwin like to watch Academy Award-nominated documentaries like Inside Job, the expose on the financial crisis. But, when they looked on Netflix it wasn't there.

"There are a number of those, and it's frustrating that it's not available," Corwin says.

Netflix Subscribers On The Rise

There's also no guarantee they will see Inside Job on Netflix anytime soon because of the way Netflix makes deals.

Michael Pachter, an analyst at Wedbush Securities, says Netflix has to "negotiate the rights to each piece of content separately."

Pachter says DVD rentals were easy — all Netflix had to do was buy a copy of a DVD and rent it out. But streaming a film like Inside Job is more complicated.

Netflix has a deal with Starz, a premium cable channel that has its own deal with Sony, which owns the rights to Inside Job. And for a little while Inside Job and other Sony pictures like The Social Network were on Netflix. Then they just disappeared.

Pachter says no one is certain why that is, but he can make a good guess. He thinks Sony had some type of cap on viewers with Starz. He says the cap probably kicked in when Netflix hit 20 million viewers.

Pachter says Netflix has deals with Nickelodeon that make it possible for Jake to see Avatar: the Last Airbender. But not everything on Nickelodeon is there because the companies negotiate in packages.

"They might have certain seasons of some of the series and not have seasons of the others," Pachter says.

The bottom line is money. Studios have been willing to deal with Netflix because it's so popular. But Netflix is getting more competitors in the world of streaming video from services like Hulu, Amazon, iTunes and YouTube.

"All the content owners are going to figure out that they can get a lot more money out of Netflix if they just hold their breath and negotiate a little tougher," Pachter says.

Recently, Netflix upset a lot of its own customers when it raised its rates 60 percent for users who want both its streaming and mail order services. Some customers even canceled their subscriptions.

And no matter how hard Netflix negotiates, there is some programming they aren't likely to ever get.

Take HBO — the company wants to keep people paying for its cable channel. And Pachter thinks HBO sees Netflix as a huge threat.

"What they fear the most is that people who have Netflix will say, 'We have enough and it's good enough,' and they'll cut off HBO."

Tom Corwin and Marlene Saritzky haven't cut off cable and HBO because they do want certain shows that they can't get on Netflix.

But there is a tipping point for this family when it comes to how much they will do to find a program. They could have found Inside Job on Amazon or iTunes. But, Corwin says, "we don't go to other services." He laughs and adds, "We're lazy."

But if Netflix is going to remain popular it's going to have to find ways to give its customers enough variety at just the right price. And going forward it's clear that is going to be a lot harder.