Accessibility links
What's Spooking Investors? While Wall Street experiences the biggest stock sell-off in years, some successful investors don't appear to be concerned. They're out buying stocks while everybody else panics. Top executives are also downplaying the perceived crisis. For many, though, it's hard to ignore the historic downgrade of U.S. Treasuries and other unpleasant developments. 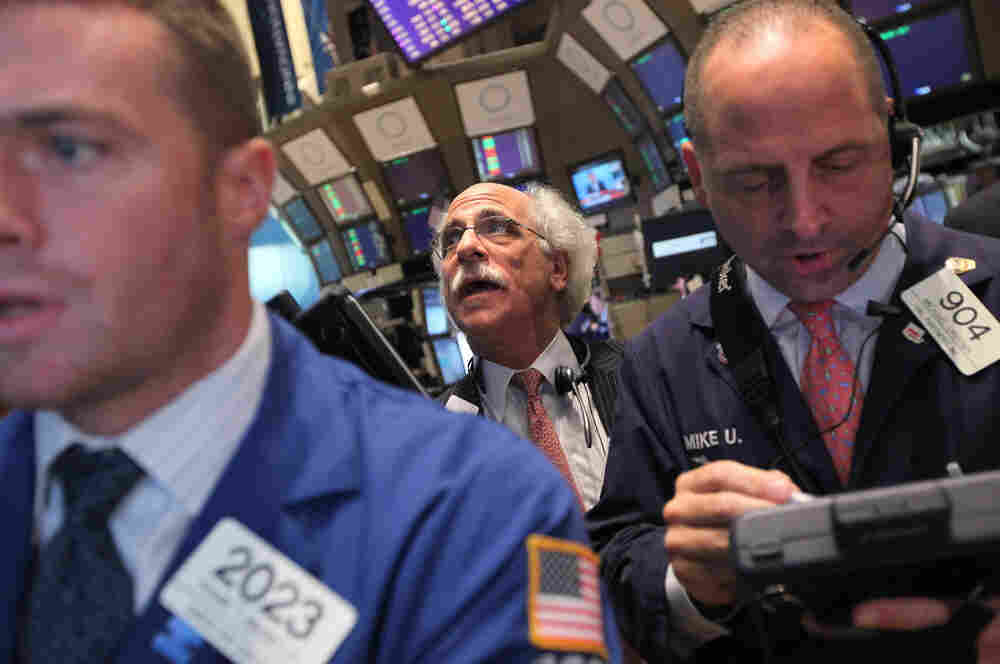 Traders work on the floor of the New York Stock Exchange on Wednesday. Wall Street is in the midst of the biggest stock sell-off since the financial crisis a few years ago. Mario Tama/Getty Images hide caption 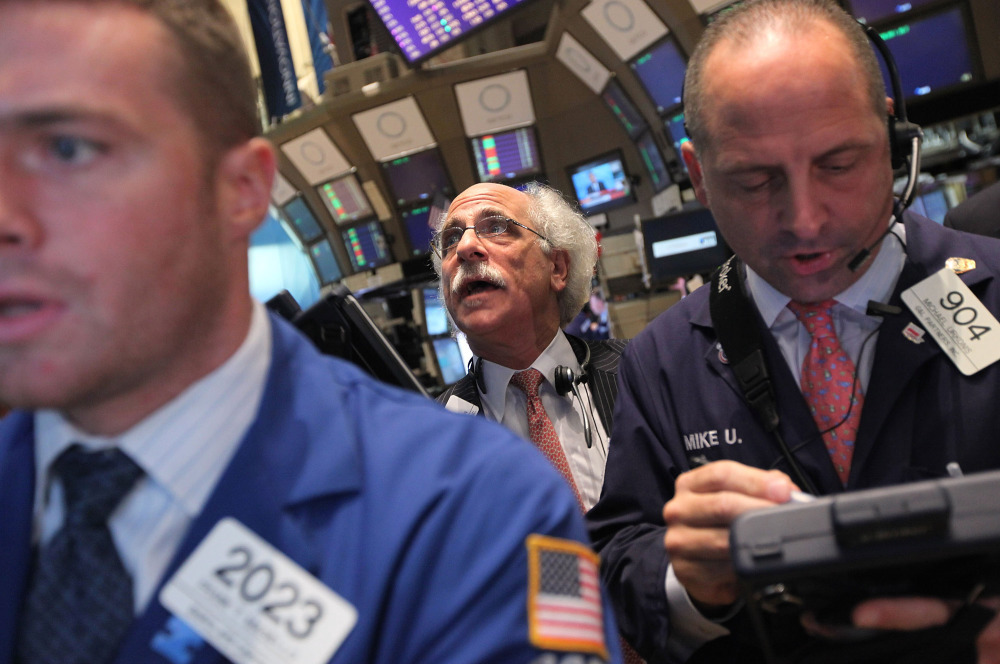 Traders work on the floor of the New York Stock Exchange on Wednesday. Wall Street is in the midst of the biggest stock sell-off since the financial crisis a few years ago.

While Wall Street experiences the biggest stock sell-off in years, some very successful investors don't appear to be concerned. They're out buying stocks while everybody else panics.

"We don't run the business based on what happens in the market in a day," Jamie Dimon, CEO of JPMorgan Chase, said Wednesday on CNBC. Bank stocks like his have been getting hammered in recent days.

"Markets are volatile, probably for pretty good reasons," he said. "There's a lot of uncertainty in the world out there, but we're still going to open branches tomorrow and hire bankers tomorrow and create clients tomorrow."

Dimon has been traveling around the country to his bank's branches to tell employees the world is not coming to an end.

"If I thought it was a calamity I'd go back to New York," he said. "But I think there is a lot of volatility in the marketplace, and America will get through this, too."

Still, it's hard for many people to ignore the historic downgrade of U.S. Treasuries, and some other unpleasant developments. 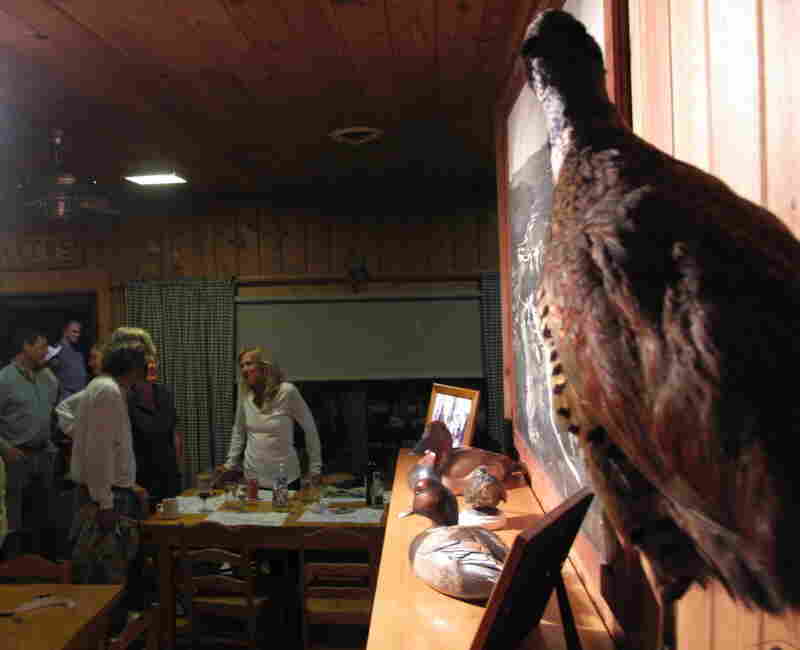 Economists and financial executives gathered for a retreat in Grand Lake Stream, Maine, last weekend. The annual event coincided with mayhem in the stock market and the downgrade of U.S. Treasuries. Chris Arnold/NPR hide caption 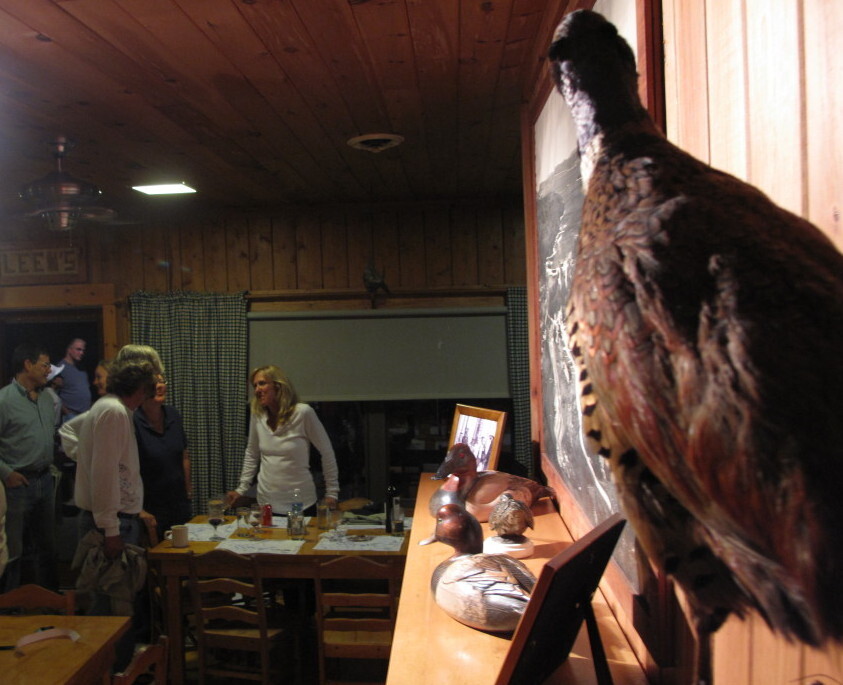 Economists and financial executives gathered for a retreat in Grand Lake Stream, Maine, last weekend. The annual event coincided with mayhem in the stock market and the downgrade of U.S. Treasuries.

A group of financial executives and economists were on a retreat in Maine when S&P announced that downgrade Friday.

"We're focused on the wrong story," Jim Bianco, the president of Bianco Research, said to Barry Ritholtz, CEO of the money management firm Fusion IQ. "It's not about downgrades that's worrying the markets; it's about the Germans coming out and saying that they're not going --"

"The hell with the Italians," Ritholz interjected.

"The hell with the Italians, we're not going to bail out Italy," Bianco continued. "Italy is the third largest bond market in the world after the United States and Japan. They're not getting bailed out. Is that the problem and not downgrade?"

Ritholtz brought up what has a lot of financial experts scratching their heads: The problems in Europe aren't new.

"Look, everybody who's following the markets knows that Portugal, Ireland, Italy, Greece, Spain are in some form of financial distress, insolvency, please we need a bailout, one of those three things," he said. "The Germans are reluctant to write big checks and bail everybody out, but none of this is an unknown. All this is well understood."

So why are stocks crashing now? One explanation is this: The implications of all this trouble in Europe could change if the U.S. economy is much weaker than we thought — and it might be.

"Simply put, the evidence that's been coming in over the last few weeks doesn't point to any pickup in U.S. growth," says Nigel Gault, the chief U.S. economist for IHS Global Insight.

For months now, economists have been blaming a soft patch in the economic recovery on some temporary factors — the tsunami in Japan, bad weather — but if that was all that was going on, growth should now be picking up. It's not.

"On top of that, we had some historical GDP revisions which told us that for most of the recovery we've actually been doing worse than we thought," Gault says.

Think about the economy as a bicycle: When you have some forward momentum on, it's easier to stay upright. You might hit a bump — like financial trouble in Europe — but you'll be OK. If the bicycle is moving slower and slower and almost stopping, however, something that might not have knocked you off before could suddenly be a bigger problem.

"I think that the slowdown in growth puts us at a point where we are extremely vulnerable to shocks which potentially could push our economy over the edge into recession," Gault says. "So I think the fear in the market is understandable. The risk is that that panic feeds on itself and that expectations drive us into recession."

Gault says he's not forecasting a recession. But he says the recovery is all of the sudden more uncertain — the bike seems to be wobbling — and many investors are worried.