Accessibility links
Obama: Big Megaphone But May Be Tuned Out President Obama has kept a low profile since his effort Monday to calm stock market jitters had little noticeable effect. To be fair, it's hard to imagine any president pulling the markets out of their nosedive with a speech. As a rule, presidential speeches tend not to change the course of events. 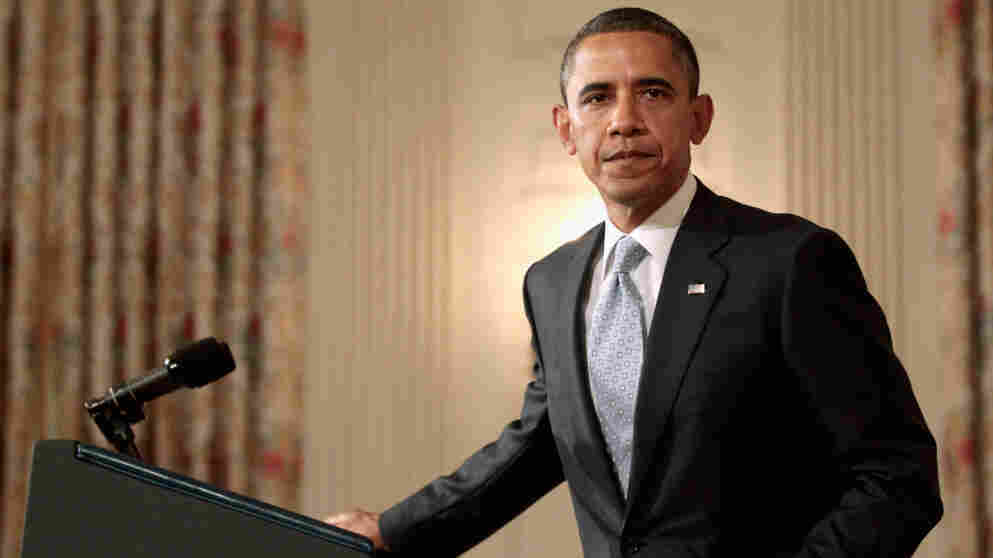 President Obama walks away from the podium Monday after speaking about the debt downgrade in the State Dining Room of the White House. Chip Somodevilla/Getty Images hide caption

On Monday morning, U.S. markets opened for the first time since Standard & Poor's downgraded America's credit rating. Stocks went over the edge like an Olympic diver.

A few hours later, President Obama stepped in front of a microphone at the White House to proclaim his confidence in the U.S.

"No matter what some agency may say, we've always been and always will be a AAA country," he said.

He left the podium, and the financial plunge continued.

So, does having the biggest megaphone in the country do the president any good?

To be fair, it's hard to imagine that any president could have pulled the markets out of that nosedive with a speech. But here's the thing: As a rule, presidential speeches tend not to change the course of events.

That's true whether we're talking about the markets or about public opinion, says George Edwards, a political scientist at Texas A&M University.

"When we look at the evidence systematically, and even look at the great communicators, we find that they rarely are able to move public opinion," Edwards says. "That includes Franklin Roosevelt, that includes Ronald Reagan, that includes more contemporary politicians like Bill Clinton — they all have a very difficult time moving the public in their direction."

Still, the hurdles may be even higher now. Dan Pfeiffer, the White House communications director, points out that the media landscape is more fractured than ever, so it can be harder just to get Americans to hear what the president has to say, let alone to agree with him.

"It used to be if you asked for prime time from the networks, basically anyone who owned a television who had it on that moment had to see you," Pfeiffer says. "It's very different now."

Obama did have public opinion on his side in the debt-ceiling fight. Polls consistently showed that Americans favored the White House approach, combining cuts with tax revenues, over the Republicans' cut-only approach. But that did not translate to winning over Congress in this case. The final deal was cuts only.

Trey Grayson of the Harvard Institute of Politics has a theory about why: "I think it's because the problem we have right now is ... both political parties are so governed by the extreme voices on either end that those are the voices that they're listening to."

Grayson knows this first hand. In Kentucky, he lost the Republican Senate nomination to Tea Party-backed Rand Paul in 2010. Sen. Paul voted against raising the debt ceiling at all.

Grayson believes the persuadable centrist Americans are those with the least clout on Capitol Hill.

'Reality Trumps Everything Else'

But then, there are limitations to any pep talk when things look gloomy.

"I think he's very much in that same place that John McCain was in the summer of 2008, when he wanted to say the fundamentals of the American economy were strong. In the face of a massive shedding of stock market value, his comments seemed to miss the mark," McDonald says.

Obama, then, risks becoming "The President Who Cried Recovery," promising economic rebound so often that people eventually tune him out.

As Matt McDonald of Hamilton Place Strategies, a veteran of the Bush White House and the McCain campaign, puts it: "You can only talk about 'things are going to get better' ... for so long and be a cheerleader for so long before it has to actually happen. And that's the role of policy, not communications, is to actually make things better."

So Pfeiffer, the White House communications director, is a bit handcuffed by policies that have fallen short. Pfeiffer quotes his former White House colleague David Axelrod, who once said that you can't spin 10 percent unemployment.

"The fact of the matter is," Pfeiffer says, "reality trumps everything else. And so no matter who the president is, no matter which party is here, reality is the most important thing. And so what you have to do is show that the president is trying to shape that reality the best he can."

So a loud megaphone can be a useful tool. But that's especially true if you actually have good news to trumpet.