Accessibility links
Franc-ly Speaking, Swiss Currency Is Too Strong Switzerland's economy is humming along, with low rates of unemployment and little debt. As a result, the Swiss franc is like gold — a haven for nervous investors. Its rapid rise threatens to harm the Swiss export economy and is already putting a damper on tourism. 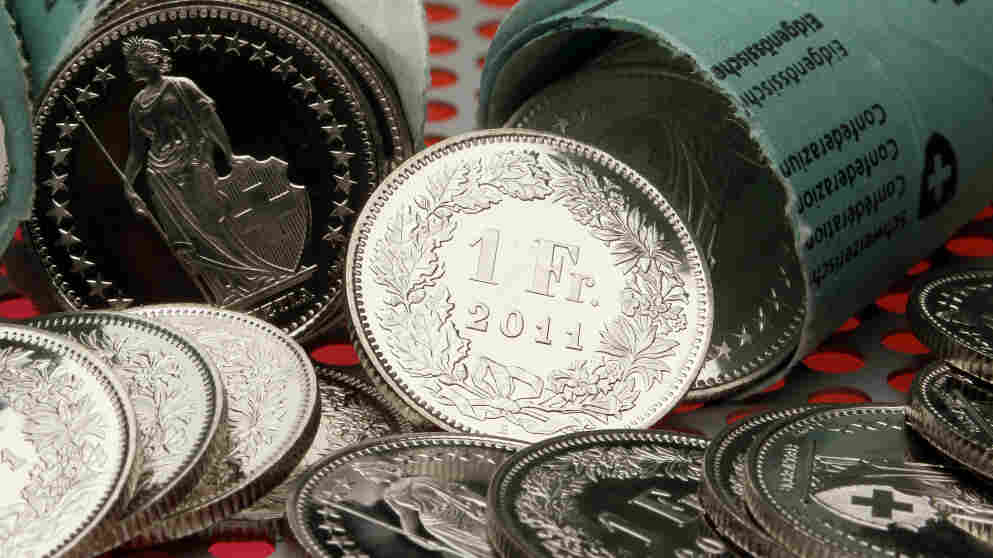 The Swiss franc has reached all-time highs against the euro and the dollar this week as nervous investors seek a safe haven. But the rapidly rising Swiss currency threatens to harm key parts of the Swiss economy, including exports and tourism. Arnd Wiegmann/Reuters /Landov hide caption 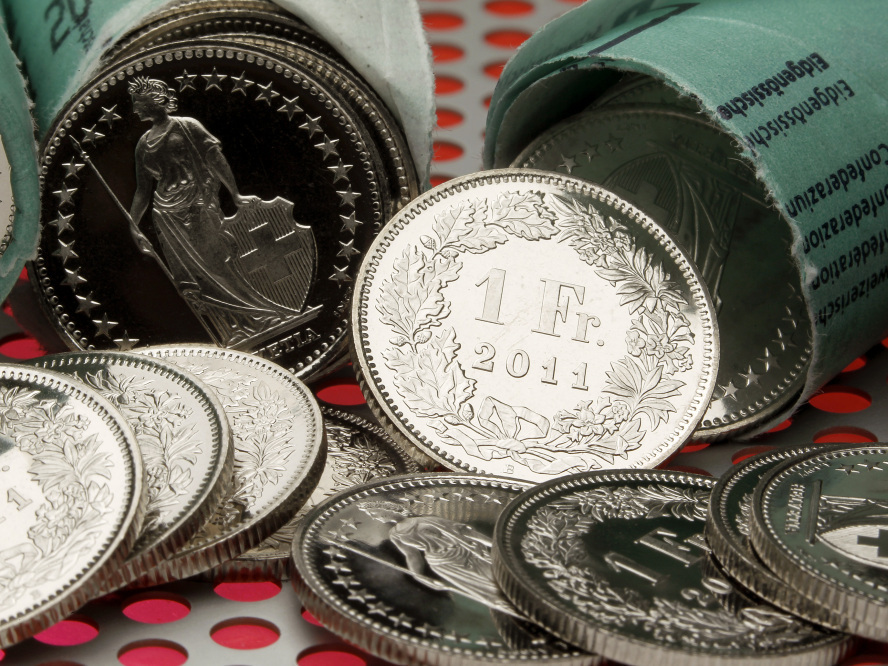 The Swiss franc has reached all-time highs against the euro and the dollar this week as nervous investors seek a safe haven. But the rapidly rising Swiss currency threatens to harm key parts of the Swiss economy, including exports and tourism.

Switzerland is in danger of becoming a victim of its own success. While much of Europe is swamped by debt, massive unemployment and political turbulence, Switzerland's economy has been humming along nicely.

That's starting to cause problems in the form of its superstrong currency. The Swiss franc has become like gold, with investors snapping up francs as a hedge against the debt crisis in the eurozone and the volatility of financial markets worldwide.

The result is that the Swiss franc has appreciated some 30 percent against both the dollar and the euro this year. Its value has spiked rapidly over the past month in particular.

"It's just like a herd behavior where a lot of people readjust their portfolios," says Iwan Barankay, a management professor at the University of Pennsylvania's Wharton School of Business.

But the franc's rapid appreciation is already hurting exports and tourism — important sectors in the Swiss economy.

"The recent evaluation is so outlandish that almost for sure it will cause a recession in Switzerland," says Rene Stulz, a professor of banking and monetary economics at Ohio State University.

Steady As She Goes

We are trying to convince people who might be afraid that it might be too expensive, to put them a little bit at ease that you can still come to Switzerland for a really affordable price.

Switzerland remained neutral during World War II. The country's even-keeled quality was mocked by Orson Welles in the 1949 film The Third Man.

"In Italy, for 30 years under the Borgias, they had warfare, terror, murder and bloodshed, but they produced Michelangelo, Leonardo da Vinci and the Renaissance," Welles' character, Harry Lime, says. "In Switzerland, they had brotherly love. They had 500 years of democracy and peace and what did that produce? The cuckoo clock."

Outsiders might still associate the Swiss economy with cuckoo clocks, watches and chocolates, but the reality is that Switzerland has run up a trade surplus largely through its highly advanced chemical and engineering industries.

The result is an inflation rate below 1 percent and an unemployment rate of about 3 percent. Government debt, as a share of GDP, is well below that held by other European nations and not much more than half the share held by the U.S.

As investors flee the dollar, the euro and the British pound, they have been flocking to the Swiss franc, driving up its value by more than 10 percent over the past month alone.

"I'm not sure they're the victims of their own success so much as they are now being affected by the mistakes of others," Stulz says.

Coping With The Change

The franc's rise is also causing problems for some neighboring countries that deal in the Swiss currency. Hundreds of thousands of Hungarians hold home mortgages in Swiss francs — and those mortgages have suddenly become much more expensive. The tiny principality of Liechtenstein uses the Swiss franc as its currency, and this has made its exports more expensive for foreign buyers.

"Due to Liechtenstein's size — 61 square miles — we have almost no domestic market for the products that our companies manufacture for export," says Claudia Fritsche, the principality's ambassador to the U.S. "Any economic repercussions are very directly and immediately felt in Liechtenstein."

The Swiss National Bank has taken repeated steps to fight the currency's rise in recent years. On Wednesday, officials announced they would boost by 50 percent the fund through which private banks can withdraw money, while the Swiss National Bank itself intends to trade in foreign exchange markets for the first time in several years.

In the past, Switzerland has gone as far as to tax foreigners when they bought francs. Economists say that the central bank has responded pretty well to the recent upheaval, but they note that it has limited tools at its disposal with which to fight such massive appreciation.

Switzerland is a country of fewer than 8 million people. "The Swiss market is not as big as the euro or the dollar market, so small readjustments in portfolios can have a significant impact on the exchange," says Barankay, the Wharton management professor.

Many of Switzerland's leading companies have complained about currency movements that are "not economically justified," as the pharmaceutical giant Novartis said in a statement.

Companies that make advanced machinery — the ones that are central to production in many factories in China, for instance — may experience a drop-off in orders, Barankay predicts. "Over the coming year, they may repair the current machines, or buy cheaper ones," he says.

Switzerland's top trading partners are Germany and the U.S., so the country's leading exporters are as likely to be hurt by an economic slowdown in other rich nations as by the currency spike. And some of them will profit from the fact that the raw materials that the landlocked country relies on have suddenly become a lot cheaper, in Swiss franc terms.

But there's one important sector of the economy that is unquestionably going to be hurt by the franc's rise: tourism. The amount of money spent by American visitors had actually gone up during the first six months of the year but is now falling off. Neighboring European travelers, who form the bulk of Swiss visitors, are staying away.

Not only are foreign visitors less likely to come — and Alpine resorts are already nervous about what will happen in the winter months, when skiers typically come mostly from other European nations — but the Swiss themselves are now much more likely to take their business elsewhere. Rooms in the French Alps are 30 percent cheaper than last year, if you're holding Swiss francs.

Switzerland At A Discount?

Switzerland has seen growth in the number of visitors coming from Asia, all the way from the Gulf to India and China. But their numbers are not enough to offset the loss of European guests. And Asians are often business travelers who are more likely to stay in the cities than go hiking in the Alps or hidden valleys.

Eberhard says his agency is stepping up its promotion efforts and looking to convince hotel operators to offer deep discounts on rooms or free spas and meals. "On a tactical level, we are trying to convince people who might be afraid that it might be too expensive, to put them a little bit at ease that you can still come to Switzerland for a really affordable price," he says.

Switzerland will always have its special attractions. The French Alps don't have the Matterhorn. But the currency could drive prices higher than many tourists are willing to pay.

"For us, the high Swiss franc obviously poses a lot of problems," Eberhard says.