Accessibility links
Mexican Theater Chain Projects Its Future In U.S. Cinepolis has opened its first luxury theater north of the border in San Diego. The world's fourth-largest cinema chain is the latest Mexican company to enter the U.S. market. 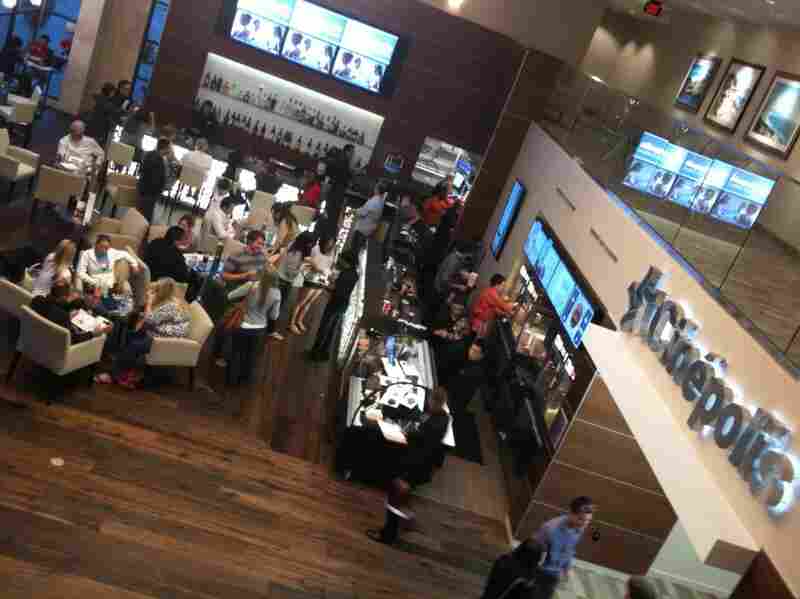 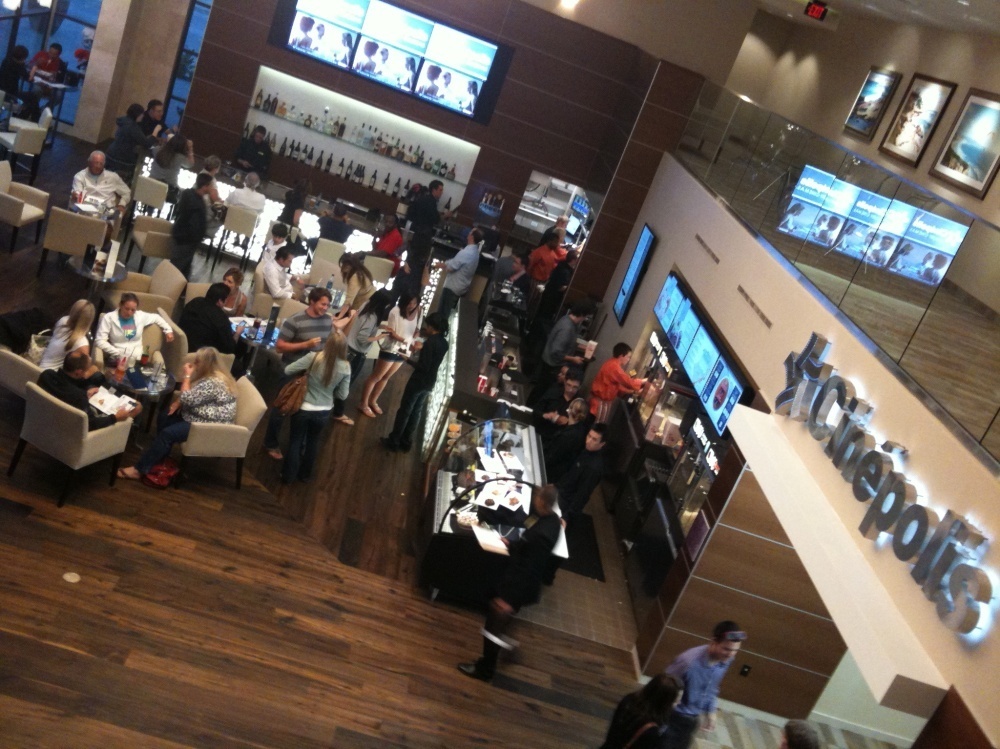 Cinepolis doesn't look like a typical movie theater. Dave and Kris Litvak, patrons of the new cinema in San Diego, say it's more like a chic hotel.

Before the building was renovated, "it looked like a horrible kind of movie theater," Dave Litvak says. Now, he says, "it's modern, and it's elegant."

The lobby floors are dark hardwood, and there's an art gallery. General Manager Antonio Garcia points to people sipping cocktails at the bar.

Small dining tables are dotted about. Sushi and fancy finger foods are made fresh in the kitchen.

And, you can order this all with the push of a button from your cushy, leather powered recliner in the chain's state-of-the-art theaters.

People in the lobby have as many guesses about the concept's origin as flavors of popcorn on the menu. When Kristen Blakeman finds out Cinepolis is from Mexico, she's surprised.

"Typically, things go the other way, as opposed to this kind of luxury coming up here from there," Blakeman says. 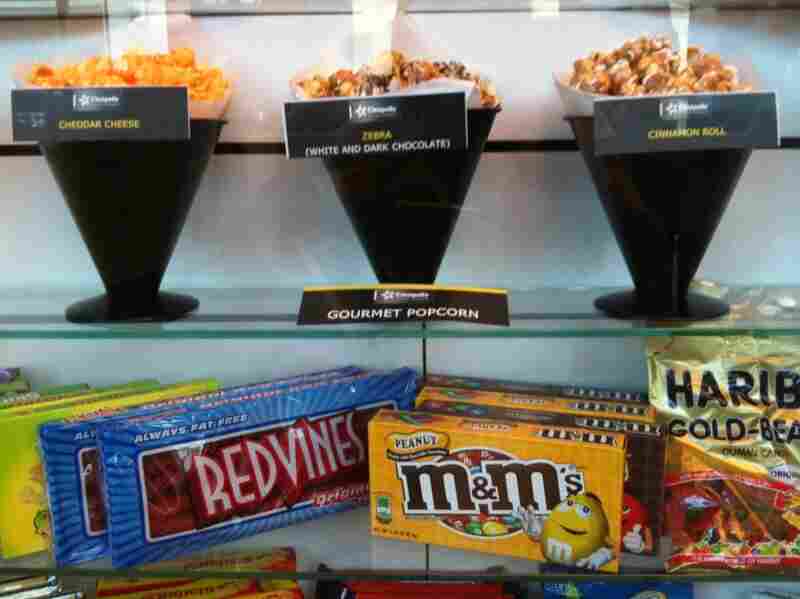 Cinepolis kept chili-flavored popcorn on the U.S. menu as a nod to the chain's Mexican roots. Amy Isackson hide caption 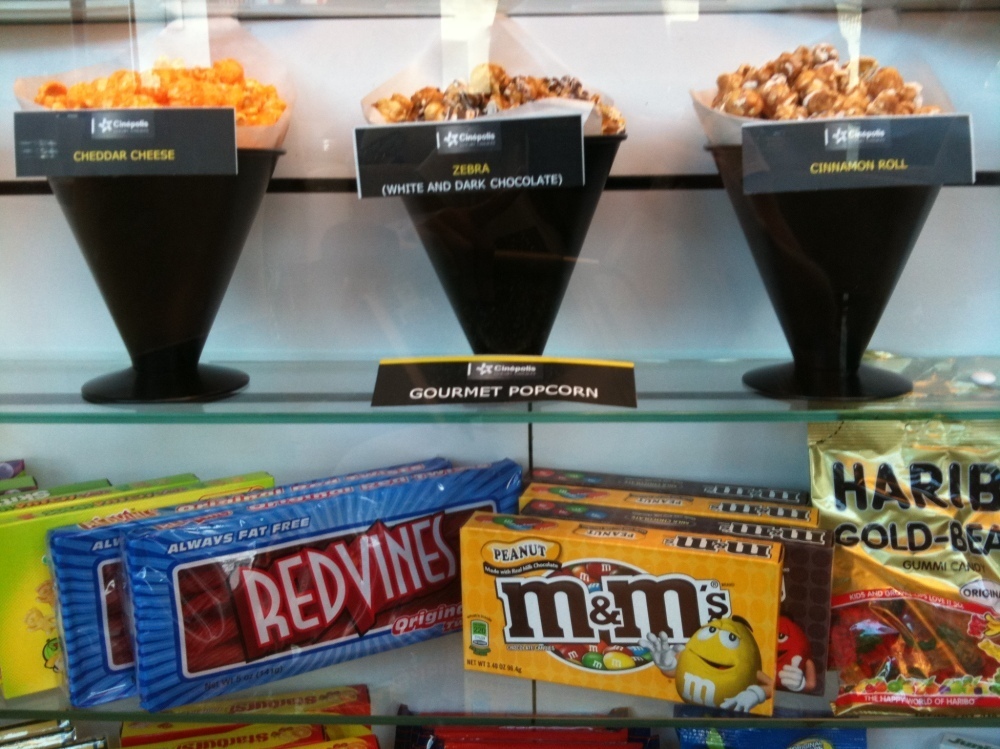 Cinepolis kept chili-flavored popcorn on the U.S. menu as a nod to the chain's Mexican roots.

Cinepolis began in Mexico in the late 1940s, and it is now the world's fourth-largest cinema chain. Wellman says it was tough to open on this side of the border.

"It's always been, like even since I was a little kid, explaining to people that we don't necessarily drive burros and eat tacos every single day," he says.

Mexican businesses have been coming to the U.S. for years. Baked goods manufacturers Entenmann's and Thomas' are owned by a Mexican company, Grupo Bimbo.

Traditionally, it's huge Mexican corporations that buy existing U.S. companies. But Cinepolis is on the cusp of a new trend: Mexican companies coming to the U.S. as themselves.

"The small companies of the young entrepreneurs—they say, 'I have the vision. I have the energy. I am not afraid of the U.S. I feel very comfortable in the U.S. market. I have a good product and I can be successful there,'" says San Diego attorney Enrique Hernandez.

Hernandez specializes in helping Mexicans conduct business in the U.S. Cinepolis is one of his clients. Hernandez says many of these businessmen, like two of the Cinepolis USA partners, got graduate degrees in the U.S.

Back at the movie theater, Cinepolis director Carlos Wellman says he hopes the theaters expand people's perception of Mexico.

"There are surprising companies that people aren't necessarily aware of that came from Mexico — the education, the culture, the population. And we hope this will set a standard," he says.

Cinepolis has identified 15 markets across the U.S. that it plans to move into. The business wants to be as synonymous with film as Thomas' is with English muffins.