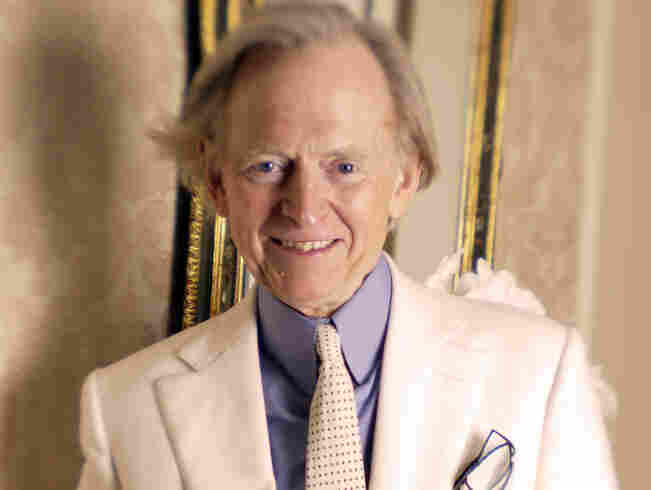 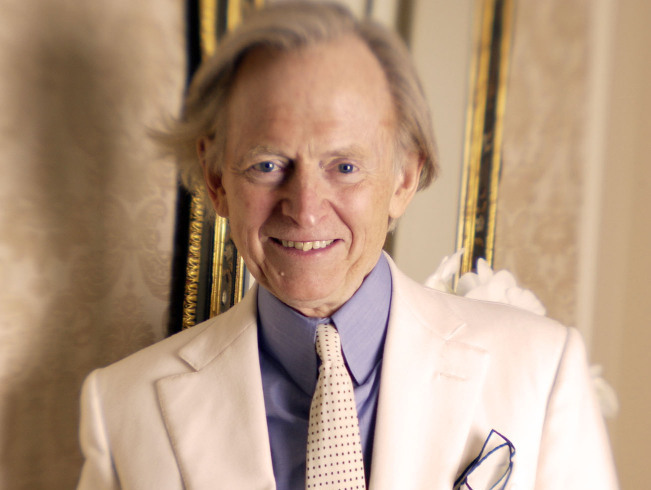 Author Tom Wolfe poses in one of his trademark three-piece suits.

The new documentary Magic Trip: Ken Kesey's Search for a Kool Place gathers never before seen footage shot during the Merry Pranksters' LSD-fueled bus trip across America in 1964. Kesey, the author of One Flew Over the Cuckoo's Nest, was the ringleader. The bus was driven by Neal Cassady, who was the inspiration for the main character in Jack Kerouac's novel On the Road.

On Friday's Fresh Air, we'll hear interviews with Kesey in 1989; with Robert Stone, who met the bus and hung out with Kesey, Cassady and the Pranksters when they arrived in New York; and with Tom Wolfe, who chronicled the bus trip in his best-seller The Electric Kool-Aid Acid Test. 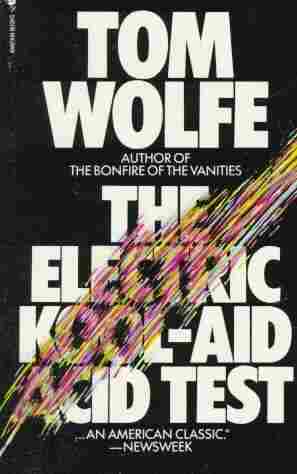 This interview with Wolfe was originally broadcast on Oct. 29, 1987.

Tom Wolfe began his career as a journalist, writing for The Washington Post, Rolling Stone, Esquire and New York magazine. In the '60s, he pioneered a style that he later named "the new journalism" — reporting that applied some of the techniques of fiction — like descriptive scene settings, dramatic tension, and dialogue. In this new and flamboyant style, Wolfe wrote about Ken Kesey's LSD experiments in the book The Electric Kool-Aid Acid Test.

In 1987, Wolfe spoke to Terry Gross about writing The Electric Kool-Aid Acid Test and about his trademark three-piece white suits, which he continued to wear while following Kesey and the Merry Pranksters.

"To try and fit into that scene would have been fatal, perhaps literally fatal," he explained. "Kesey had this abiding distaste for pseudo-hippies — the journalist or the lawyer or teacher who on the weekend puts on his jeans and smokes a little dope."

Wolfe said that Kesey would often test visitors and try to determine who among them was a "weekend hippie" and who actually followed the hippie lifestyle.

"He would say, 'All right, let's everybody get naked and get on our bikes and go up Route 1,' " recalled Wolfe. "They did. This separated the hippies from the weekend hipsters very rapidly. I didn't have to worry because I was in my three-piece suit with a big blue corduroy necktie and the idea that I was going to take any of this off for anybody was crazy."

The suit, he said, functioned to differentiate him from the people he covered in his pieces — and made it clear to his subjects that he was not one of them.

"I have discovered that for me, it is much more effective to arrive in any situation as a man from Mars than to try and fit in," he said. "When I first started out in journalism, I used to try and fit in. ... I tried to fit into the scene. ... I was depriving myself of the ability of some very obvious questions if I fit in. ... After that, I gave it up. I would turn up always in a suit and just be the village information gatherer."

Tom Wolfe's other books include The Right Stuff, The Bonfire of the Vanities, A Man in Full and I am Charlotte Simmons. His long-form journalism pieces have appeared in Esquire, Vanity Fair, New York Magazine and Harper's.