Accessibility links
More Than Just A Pretty Overture: Rossini's 'William Tell' It's not just "Hi-ho, Silver!" — there are four whole acts, not to mention that apple and bow.

Hear An Introduction To 'William Tell'

Hear An Introduction To 'William Tell' 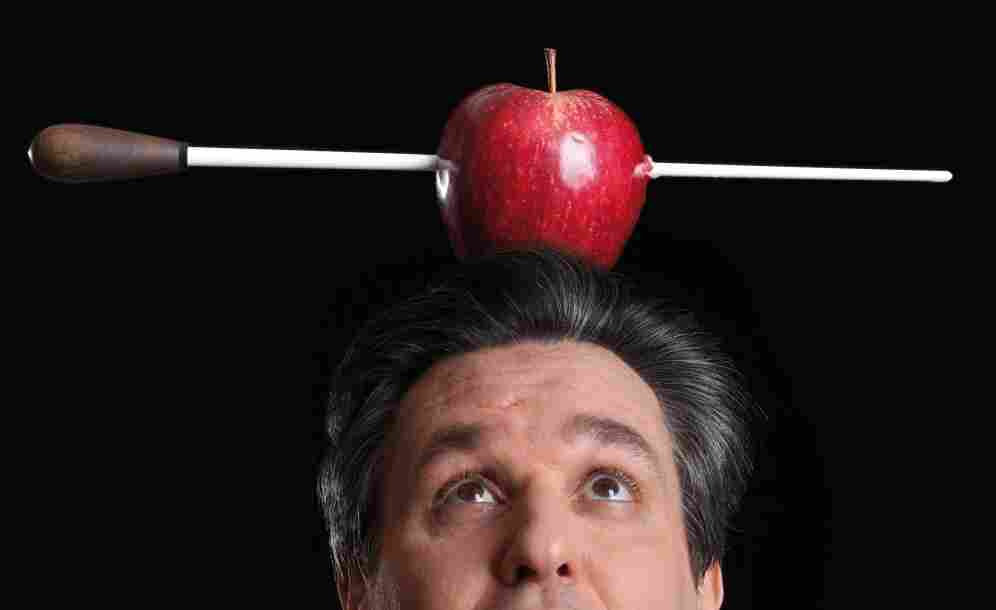 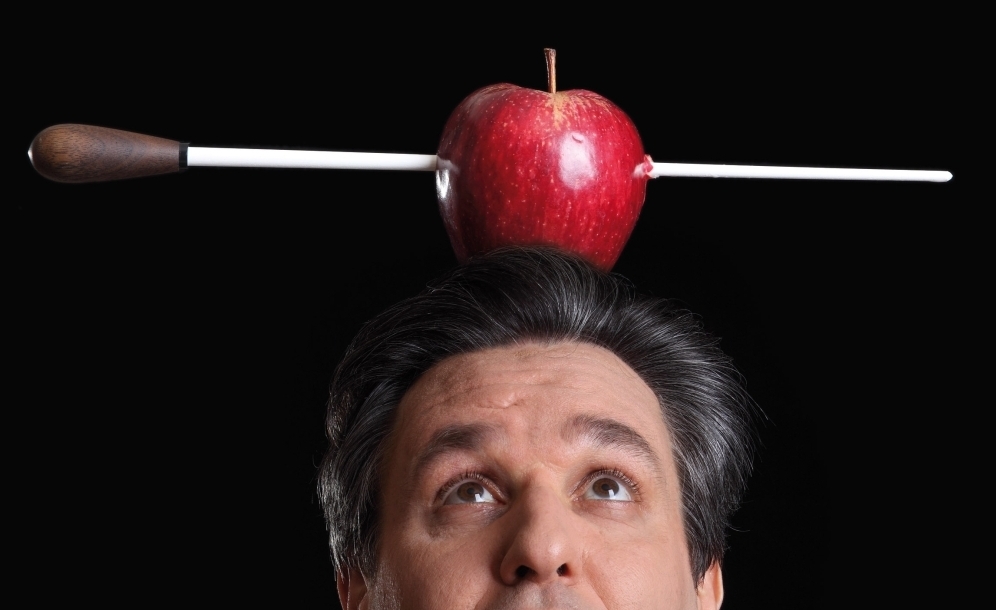 William Tell may not be Gioachino Rossini's most famous opera, but it does have at least two tunes that rank among the most familiar music ever composed.

Plenty of operas can boast of a single melody that has become more famous than the opera itself — the sort of tune that people recognize as something from an opera, even if they have no idea which opera it is.

In Act Two, William Tell and Walter Furst (baritone Michele Pertusi and bass Matthew Rose) try to persuade Arnold (tenor John Osborn) leave his Austrian lover and join the cause of Swiss independence — while also breaking the news that the Austrians have murdered Arnold's father. Their trio is one of Rossini's finest ensembles.

Then there are tunes that might be called "operatic escapees" — melodies heard so often, and in so many places, that they've earned a life of their own, independent of the operas for which they were created, to the point that they're barely associated with opera at all.

One example of such an escapee is the wistfully beautiful "Flower Duet" from Leo Delibes' opera Lakme, heard everywhere from movies to TV commercials to elevators. It's entirely possible that most who recognize the tune have never even heard of Delibes.

Then there's the "Dance of the Hours," familiar to millions from the sublimely ridiculous hippo ballet in Disney's "Fantasia," and from Allan Sherman's pop hit, "Hello Mudda, Hello Fadda." But how many among those millions know about its real home, in Amilcare Ponchielli's opera La Gioconda?

And that brings us to William Tell. The opera, as a whole, isn't heard that often. But its overture alone features two melodies that broke free of their operatic origins. In the overture's quiet middle section, there's a simple theme that has backed up enough pastoral scenes to have become a sort of musical cliché. Right on the heels of that tune comes one of the most famous musical passages of all time: the melody that galloped into radio and TV history as the theme to "The Lone Ranger." Just think "Hi, ho Silver, away!" and the tune will likely pop into your mind at the same time.

But there's no need to stop with the overture, and on this edition of World of Opera, we don't. Host Lisa Simeone presents William Tell in a complete performance from one of music's premiere summer destinations, London's Royal Albert Hall and the 2011 Proms Concerts. The cast features baritone Michele Pertusi in the title role, with conductor Antonio Pappano and the Orchestra and Chorus of the Santa Cecilia Academy in Rome.

The Story Of 'William Tell' 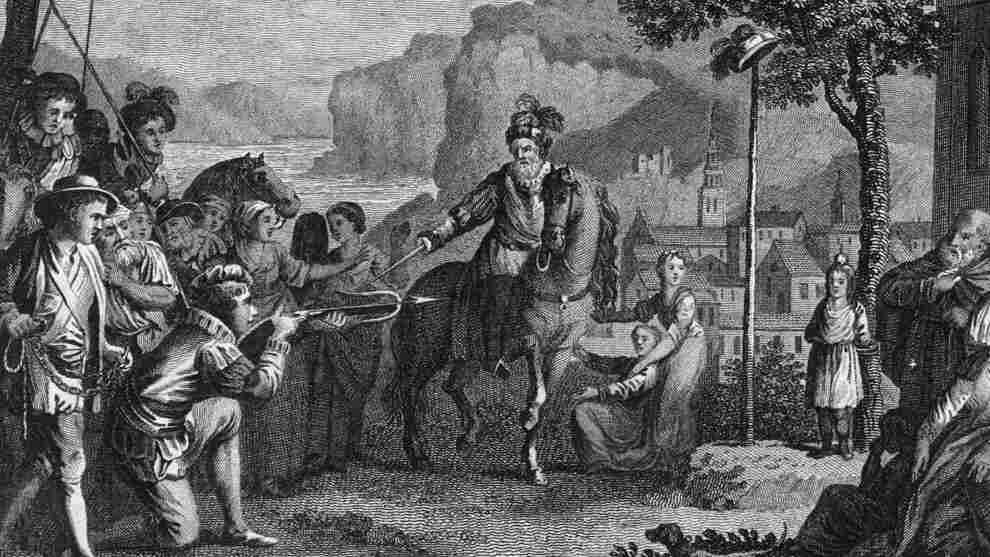 The action takes place in medieval Switzerland at a time when much of the country is controlled by Austria. William Tell is a respected Swiss patriot who is opposed to Austrian rule. ACT ONE begins on the shores of Lake Lucerne, where a triple wedding celebration is underway. The people in this part of the country are beginning to resist the Austrian occupation, and Rossini's music includes choral and ballet numbers that emphasize the importance of Swiss culture and traditions.

A revered local elder named Melcthal is presiding over the marriage ceremony. He's opposed to the Austrians but, ironically, Melcthal's own son, Arnold, is in love with an Austrian princess, Mathilde. When Tell urges Arnold to champion the Swiss cause, Arnold is torn between love and patriotism.

Melcthal blesses the three couples, and the festivities include an archery tournament won by Tell's son, Jemmy. But things turn dark when a herdsman named Leuthold rushes in frantically. He caught an Austrian soldier attacking his daughter, and killed the man. Now the Austrians are after him, and he appeals for help. The only way out is to cross the lake, but there's a storm approaching, making the waters treacherous. Only Tell volunteers to man the ferry and row Leuthold to safety.

The Austrians arrive too late to catch Leuthold. They demand to know who helped him to escape, but no one speaks up. Enraged, the Austrians prepare to sack the village, and Rodolphe, the Austrian governor's henchman, takes Melcthal as a hostage.

ACT TWO opens on the heights overlooking Lake Lucerne, in the evening. A hunting chorus is heard, along with villagers singing a Swiss folk song. Melcthal's son Arnold is alone with Mathilde. The two are deeply in love, and Arnold is determined to be with her. He decides that to be worthy of Mathilde, he may have to side with the Austrians.

Tell and his friend Walter Furst, another Swiss patriot, see the lovers together. In a thrilling trio, one of Rossini's finest numbers, they try to persuade Arnold to stay with his own people. In the process, they break the news that his father, Melcthal, has been murdered by the Austrians.

Local men begin to assemble, gathering to swear allegiance to the Swiss cause. As the day breaks, there's a drum roll and the repeated cry, "To arms!"

As ACT THREE begins, Arnold and Mathilde are alone in a chapel garden in the Swiss town of Altdorf. With his father dead at the hands of the Austrians, Arnold knows he can no longer stay with her, and the two say their goodbyes.

The scene changes to the Altdorf square. Gesler, the Austrian governor, has ordered festivities to celebrate 100 years of Austrian rule. The villagers are hostile, and things grow even more tense when Gesler orders some Swiss women to dance with the leering, Austrian soldiers.

Tell refuses to pay homage to Gesler. When someone recognizes him as the man who helped Leuthold escape from Austrian soldiers, Gesler has Tell arrested. And when Tell orders his son Jemmy to relay the signal to start the Swiss rebellion, Gesler has Jemmy taken into custody, as well.

Gesler then initiates the incident that cemented the legend of William Tell. He orders Tell to take up his crossbow, and shoot an arrow through an apple placed on Jemmy's head. Tell expresses his defiance in one of Rossini's greatest arias. Then he draws his bow, and hits the apple. But he also declares that his second arrow was intended for Gesler himself, and Tell is quickly bound and taken away. Mathilde intervenes, demanding that Jemmy be released into her care. She also says she'll use her influence to have Tell released. But Gesler gives orders for Tell to be imprisoned in the notorious dungeons of Kussnacht.

In the first scene of ACT FOUR, at Melcthal's family home, Arnold makes plans to avenge his father's death. With Tell in prison, Arnold also knows that it's up to him to lead the Swiss revolt. He's joined by patriots from all the nearby states, and leads the rebels to a cache of weapons hidden away by Tell and his father.

The opera concludes on a mountainous shoreline of Lake Lucerne. Mathilde is there, along with Jemmy and Hedwige, who is looking for news of Tell. Jemmy lights the lantern to signal the uprising. On the opposite shore, Tell is boarding a boat with his Austrian captors. When they cut his bonds so he can help with the crossing he overpowers them, and bravely crosses the stormy waters himself.

When Tell lands, he quickly hunts down Gesler and kills him. As Altdorf is liberated, the army of patriots gathers under clearing skies. Arnold sings a tribute to his dead father, and the opera ends with a hymn to nature and liberty.