Accessibility links
Opportunity In Famine's Toll On Somali Insurgency As the U.S. and other donors scramble to help Somalis survive a famine, some experts see an opportunity of sorts. The drought, they say, seems to be starving the Islamist militia al-Shabaab of resources, limiting its ability to wreak havoc in Somalia. 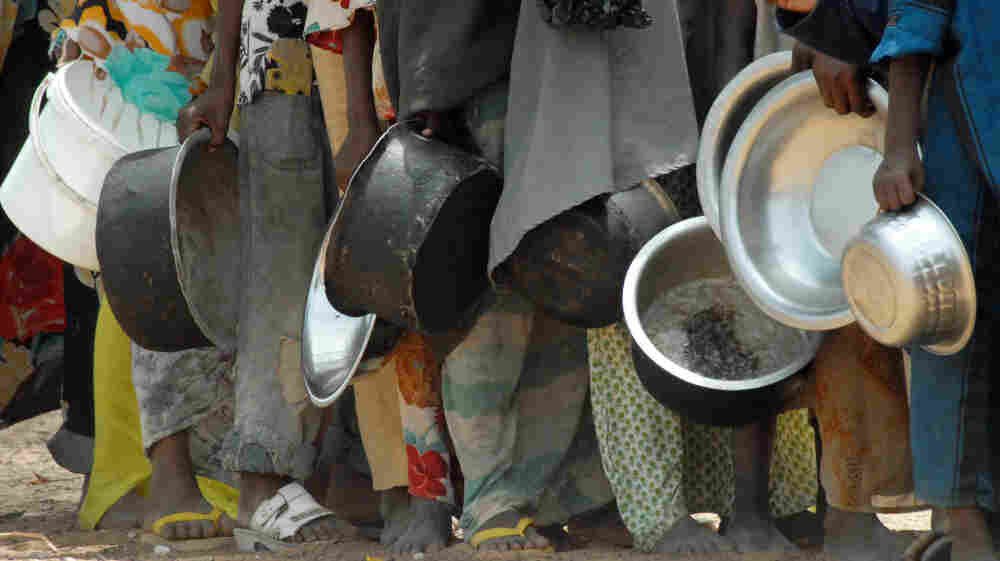 Displaced Somalis waits in a queue for food rations at an IDP camp in Mogadishu. The United Nations has officially declared famine in Somalia for the first time this century. Mustafa Abdi/AFP/Getty Images hide caption 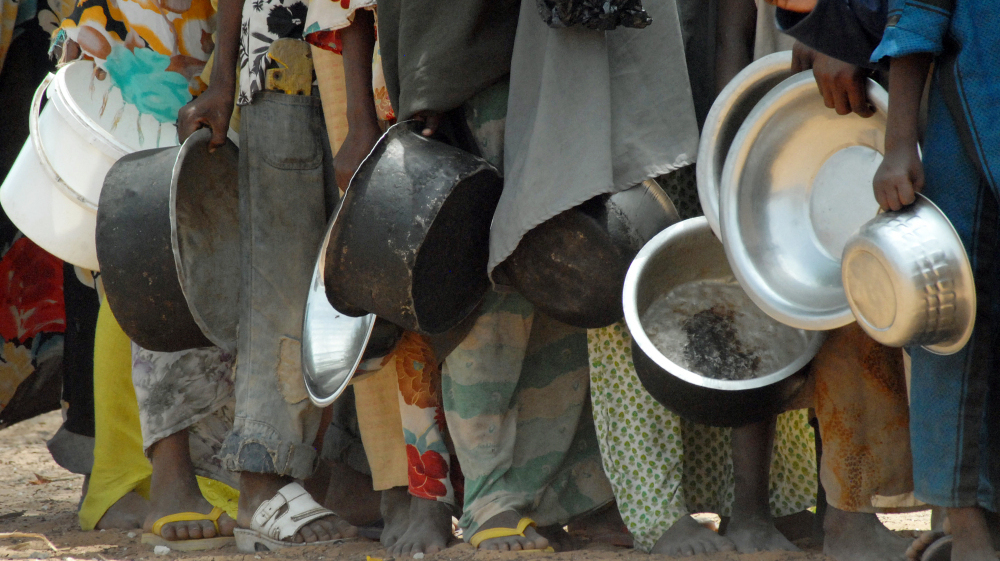 Displaced Somalis waits in a queue for food rations at an IDP camp in Mogadishu. The United Nations has officially declared famine in Somalia for the first time this century.

How can you feed starving people without feeding an insurgency as well? That is one of the challenges the Obama administration faces in providing aid to Somalia.

As the U.S. and other donors scramble to help Somalis survive a famine, some experts see an opportunity of sorts. The drought, they say, seems to be starving the Islamist militia group al-Shabaab of resources, limiting its ability to wreak havoc in Somalia.

When administration officials talk about the drought in the Horn of Africa, they are quick to point out that famine was declared only in Somalia, and only in parts of the country controlled by al-Shabaab.

"The terrorist group al-Shabaab has prevented humanitarian assistance from coming in, and it has killed and threatened aid workers," Secretary of State Hillary Clinton said. "There are also credible reports that al-Shabaab is preventing desperate Somalis from leaving the areas under its control."

Under pressure from African union troops, al-Shabaab did pull out of most of Mogadishu. And the UN's special envoy for Somalia, Augustine Mahiga, told reporters recently that al-Shabaab has fractured.

"It may regroup. It may melt into the population. It may go into what they're worst at doing — terrorist tactics," Mahiga said. "This cannot be ruled out."

But for now, Mahiga says, al-Shabaab is being starved of other financial support. They have lost control of a major market taxing shopkeepers. In fact, the group's economic base seems to have been undercut by the drought, according to J. Peter Pham, director of the Africa program at the Atlantic Council here in Washington.

A Narrow Window Of Opportunity

As awkward as it is to say that a famine provides a moment of opportunity, Pham thinks this is a time to exploit the divisions in the al-Shabaab movement. He says the trouble is that the transitional government in Mogadishu is corrupt and ineffective.

"There is a narrow window of opportunity right now if the international community were to engage local communities, local leaders [and] assist them, strengthen them while [al-Shabaab] is weak," Pham said. "Otherwise, I think eventually Shabaab will recover, and if the only thing on the table is the transitional federal government, then I don't think it will be long before Shabaab is back in real strength."

The U.S. has eased restrictions on aid workers hoping to reach those communities in al-Shabaab-controlled parts of the country. Administration officials say aid groups won't be prosecuted if some money inadvertently falls into the hands of the al-Shabaab. Ken Menkhaus of Davidson College says as aid goes, in diversion is unavoidable, but he doesn't think that al-Shabaab will benefit much.

"They are presiding over the famine and in that particular circumstance, if aid agencies can find ways to negotiate space and they are anxious about this, but they think they can do it through local intermediaries, I think it will work against al-Shabaab," Menkhaus said. "It will demonstrate that others can deliver the goods when they cannot."

But Menkhaus also said a lot depends on what the transitional federal government in Mogadishu does — if it can really govern and stop its paramilitary forces from stealing food aid.

"The famine may have jolted both Somalis and the international community into finally saying we really need a permanent resolution to this crisis," he said.

Menkhaus said U.S. policy makers are thinking about their diplomatic strategy for the region, even as they scramble to meet the urgent humanitarian needs in Somalia.