Accessibility links
'Sex On Six Legs': When Insects Go Wild Everything you wanted to know about bug sex (but didn't bother to ask) is explained in a new book. Insect expert Marlene Zuk describes how ants learn, why some crickets don't chirp and how various bugs mate in Sex on Six Legs: Lessons on Life, Love and Language from the Insect World. 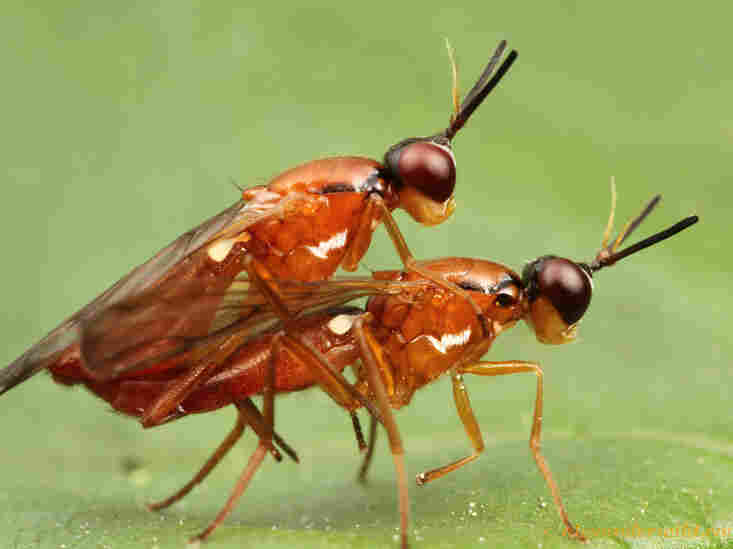 A pair of flies mate on a leaf. Male damsel flies use all sorts of tricks to get females to use their sperm — and not the sperm of another male damsel fly — to fertilize their eggs. Alex Wild hide caption 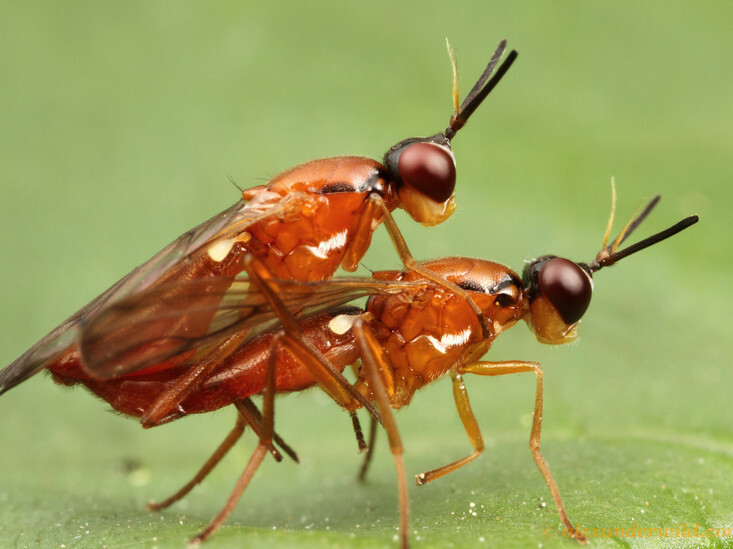 A pair of flies mate on a leaf. Male damsel flies use all sorts of tricks to get females to use their sperm — and not the sperm of another male damsel fly — to fertilize their eggs.

Everything you wanted to know about bug sex (but didn't bother to ask) is explained in a new book by insect expert Marlene Zuk. Sex on Six Legs: Lessons on Life, Love and Language from the Insect World, describes a world of small — but surprisingly sophisticated — insect behavior.

Insects are not mindless robots; they can learn just like other animals, says Zuk, a biologist at University of California, Riverside. "An ant who finds a food source will come back to recruit others to go to the same food source," she tells Fresh Air's Dave Davies. The ant that knows where to go will show the others what to do. "It looks like a parent teaching a child how to ride a bicycle. ... They steer the other individual and will actually wait for them to catch up and make sure they're going in the right direction."

The book answers all sorts of questions about insect behavior, including how wasps recognize each other, why some crickets remain silent and how bees debate. The book also details how insects reproduce — in every imaginable way.

Lessons on Life, Love, and Language from the Insect World

For example, the damsel fly engages in a practice called sperm competition, in which male damsel flies use all sorts of tricks to get females to use their sperm — and not the sperm of another male damsel fly — to fertilize their eggs.

Some male insects also give females what's called a spermatophylax to increase their chances of mating. A spermatophylax, which can weigh up to 30 percent of a male's body weight, is essentially like a really good snack attached to their sperm.

"It has a lot of protein in it, it's very nutritious — and the female eats it while the sperm [from the male] is draining into her body," Zuk says. "And the males have to produce this before the female will mate. If he just has the sperm, she won't mate with him. If he does have it, she will mate with him — but the bigger and more nutritious it is, the longer she'll spend eating it, and therefore more of his sperm drain into her body and fertilize her eggs."

Once those eggs are fertilized, there are plenty of cases where the males help care for them and then take care of their young. Male water bugs, for example, carry fertilized eggs around on their backs for the entire time the eggs are incubating.

"When they hatch, sometimes they take care of them a little bit more and sometimes they let them go," Zuk says. "But the moms just lay the eggs on the back of the male and swim off and never care in the world.'"

Where To Find The World's Most 'Wicked Bugs'

Under The Sea, Sex Is Slimy Business

Fertilization in water bugs takes place after the female lays her eggs on a male's back, making it genetically advantageous for the father to care for his young.

"It's absolutely certain to be his," Zuk says. "[In other insects] it's never entirely certain that the father is the father of the offspring that comes out of the females."

Not all offspring are so lucky; there are some insects that eat their babies. "It's one of these things where sometimes doing something that seems drastic in the short term pays off in the long term," Zuk says. "If you have a lot of eggs and the breeding season is going on and on, and you're not able to find food for yourself, you're going to be better off by eating some of those eggs. The ones that remain will get the protection you can give them by hanging on long enough to take care of them."

Marlene Zuk is a professor at the University of California, Riverside. Her other books include Sexual Selections: What We Can and Can't Learn About Sex from Animals and Riddled with Life: Friendly Worms, Ladybug Sex, and the Parasites That Make Us Who We Are.

Read an excerpt of Sex on Six Legs