Accessibility links
For Slice Of Fame, Pizzerias Spar Over 'Oldest' Title The title is generally thought to belong to Lombardi's, a pizza joint in New York City that opened in 1905. But Papa's Tomato Pies of Trenton, N.J., says it deserves the crown since Lombardi's was closed for 10 years in the 1980s. 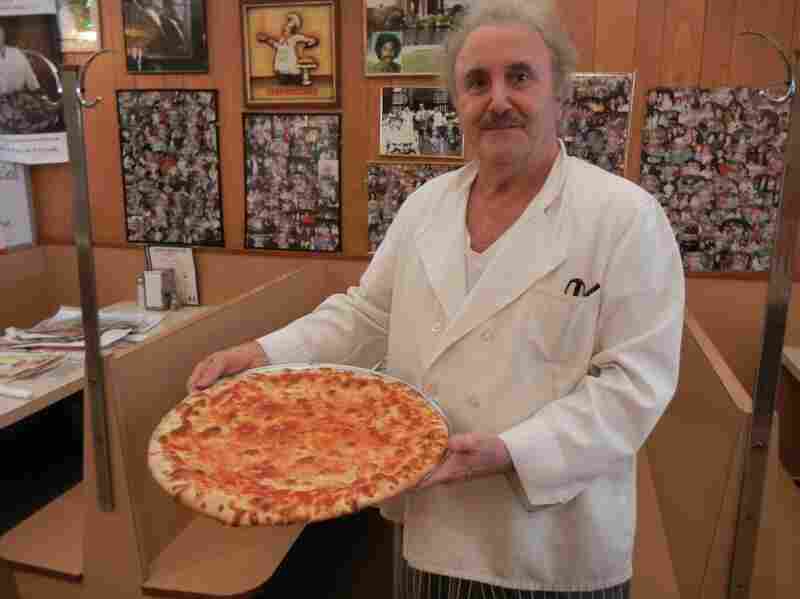 Nick Azzaro, owner of Papa's Tomato Pies, poses with one of his creations. Azzaro, who is now 64, says he's been making pizzas since he was 14 years old. Joel Rose/NPR hide caption 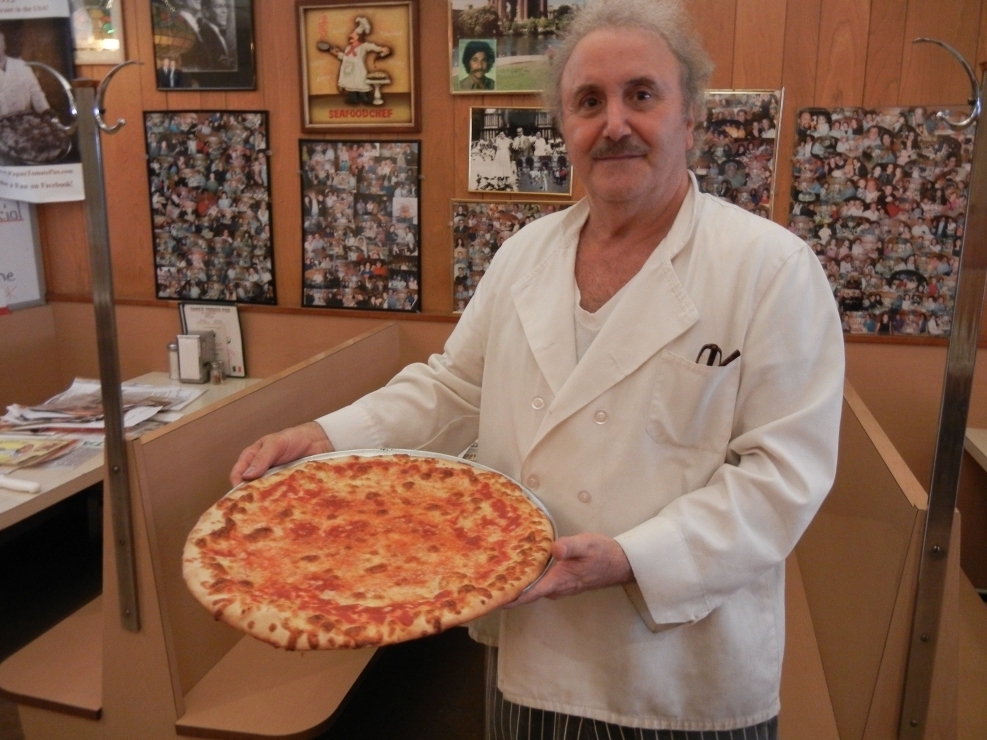 Nick Azzaro, owner of Papa's Tomato Pies, poses with one of his creations. Azzaro, who is now 64, says he's been making pizzas since he was 14 years old.

For years, a New York restaurant has claimed to be the oldest pizzeria in the country, but now a rival from Trenton, N.J., says it deserves the crown.

A Trenton tomato pie starts out like any other pizza, with the dough, which has to be flattened by hand. Then things are a little different.

"We put the dough out first, then we put cheese on, then we put the tomatoes on the top because it tastes better," says Nick Azzaro, the owner of Papa's Tomato Pies. "I can tell you a lot of reasons, but that's the basic."

Azzaro is a third-generation pie man, with the thick mustache and frizzy, gray hair to prove it.

"I've been making pies since I was 14 years old. And I'm now 64," he says. "And I can tell you, unless someone else is going to pop up, we're the oldest pizza restaurant in the United States."

For a while, Azzaro was happy to call himself the country's second-oldest pizzeria — after Lombardi's in New York City, which started selling pies in 1905, seven years before Papa's. 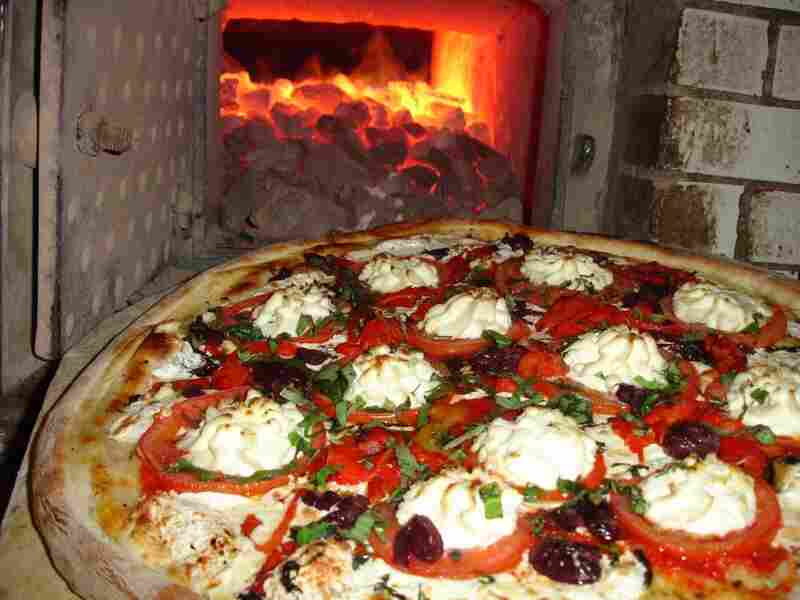 Lombardi's bakes its pizzas in a coal-burning oven. The pizzeria opened its doors in 1905 in Manhattan's Little Italy neighborhood. Courtesy of Lombardi's Pizza hide caption 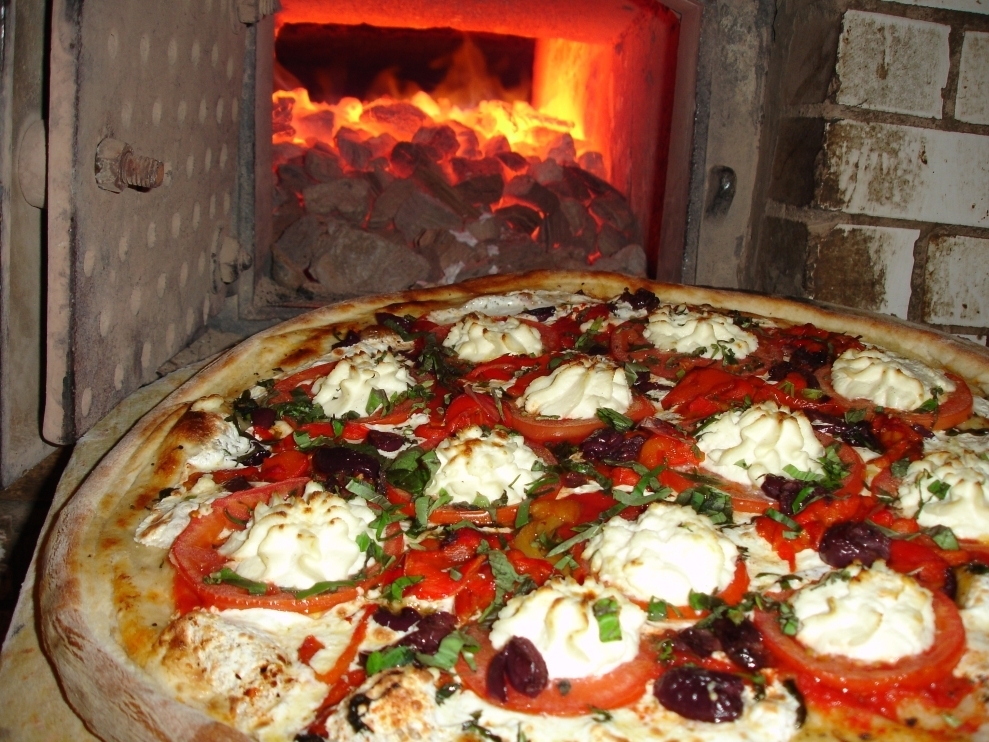 Lombardi's bakes its pizzas in a coal-burning oven. The pizzeria opened its doors in 1905 in Manhattan's Little Italy neighborhood.

But a few months ago, Azzaro's customers told him something he didn't know: Lombardi's was closed for a decade.

But try telling that to Lombardi's.

Pizzas fly in and out of the coal-burning oven at this landmark pizza joint in Manhattan's Little Italy neighborhood. The place is crowded with foodies and tourists who've flocked to eat at America's first pizzeria.

"Gennaro Lombardi was the first to put a pizzeria in America," says John Brescio, who runs Lombardi's. He doesn't deny that the original Lombardi's closed in 1984, or that the current restaurant reopened a few doors down from the original 10 years later.

Still, Brescio doesn't seem too worried about his competition, including the man he refers to as "the fella from New Jersey."

"When you call yourself the first, you gotta be on target because there's always a guy that's trying to say he was before you, or that somebody died, or whatever," he says. "But my mind is really on making my pizza."

Brescio is still making his pizza the way Gennaro Lombardi used to, in a coal-fired oven with fresh mozzarella and crushed tomatoes.

Ed Levine wrote the book on pizza, Pizza: A Slice of Heaven. And he says semantic disputes about "first" and "oldest" are nothing new.

"Pizza lore is filled with internecine warfare, and who did what," Levine says. "They've been battling over these questions and these issues and claims ever since I've been writing about pizza, and that's part of the fun of pizza."

Truth be told, Papa's Tomato Pies in Trenton isn't in its original location either. And the coal oven is long gone. But Nick Azzaro says if anyone deserves the title of oldest pizzeria, it belongs with him, in New Jersey.

"I put my time in. I've been here since I was a kid, and I held up my grandfather's recipes — and his name," he says. "So maybe I deserve it."

Azzaro isn't waiting for anyone to hand him the title. There used to be a sign in the window that said, "You've just eaten at the second oldest tomato pie restaurant in the United States."

Now the sign is back up with a piece of tape over the word "second." But Azzaro says the crowds aren't lining up around the block yet.