Accessibility links
In Yemen, A Woman Leads The Call For Revolution Yemen is in its seventh month of political turmoil. From a tent in the capital, Sanaa, Tawakkol Karman is leading anti-government protesters. The journalist and human-rights activist says she has learned many lessons from other uprisings in the Arab world. 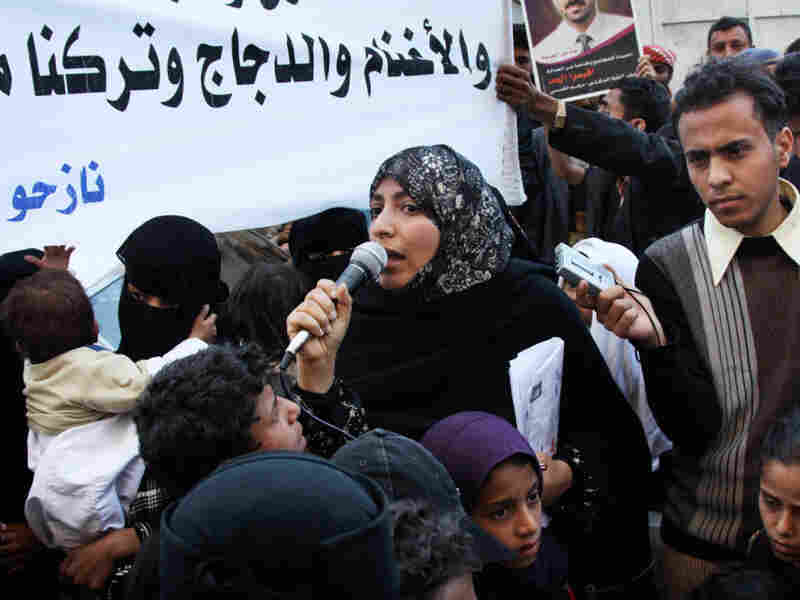 Tawakkol Karman is a leader of the anti-government protest movement in Yemen. She has received death threats during her career as an activist but remains committed to bringing democracy to her country. Sean Carberry/NPR hide caption

Tawakkol Karman lives in a tent in Sanaa, the capital of Yemen.

"Today is my beautiful day," she says, tickling her 8-year-old son, Ibrahim. "The one day a week I can spend with my family."

Karman's tent is part of a sprawling encampment of tarp and concrete blocks that goes on for a mile down Sanaa's main street. Set up by anti-government protesters, it's known as Change Square.

And Karman is known as the woman behind the revolution.

Of all the Arab countries that have erupted in protest this year, Yemen has been at it the longest. The country is now in its seventh month of turmoil, with no end in sight.

Yemen's President Ali Abdullah Saleh was badly wounded by an explosion at his palace mosque in June, and has been recovering in Saudi Arabia ever since.

But he still insists he is the country's ruler, and protesters have resolved to stay in the streets until he and his sons and nephews step down.

For Karman, the need for change became clear years ago. She first worked as a journalist, then began organizing protests.

Back then, each protest was about a single issue: the jailing of a journalist, a land grab, a corrupt official.

Authorities in male-dominated Yemeni society thought they could shut Karman up by sending threats to her male friends and relatives. The worst one, she says, came in 2007, when someone told her they would kill her, kidnap her children and throw them from a mountain.

But Karman didn't stop organizing protests. Looking back now, though, she says they did little good.

Everything changed with the uprising in Tunisia and the fall of the first Arab dictator in January.

In Yemen, Karman and a dozen or so students marched toward the Tunisian Embassy. Security forces came after them and tried to take their cameras.

Karman later called a meeting to plan the next protest.

"We must not lose this moment," she told the students. "This is the only solution to save our country."

The next day, the group again marched to the Tunisian Embassy.

For the first time, Karman heard Yemenis utter what has now become the signature phrase of the Arab revolutions — "the people want the fall of the regime."

Karman realized her project was about much more than individual issues.

"We have to start our country from new. We have to own our own country," she says.

The protests spread to cities and towns around Yemen. In Egypt, protesters were assembling in a single square. In Yemen, they gathered in squares, some 20 in all.

Then, on March 18, security forces fired into Sanaa's Change Square, killing dozens and wounding hundreds more. Karman saw friends lying on the ground, shot in the head. Survivors were too dazed to move.

"I couldn't cry. It isn't good for me to cry in front of them," Karman says.

Instead, after helping get people to the hospital, Karman climbed onto the square's main stage and gave a speech.

And so the protests in Yemen grew to the hundreds of thousands. Generals, politicians, tribesmen joined Karman's revolution.

Three times, Yemen's president agreed to sign a plan that would ease him out of power. And three times he backed out on his promise.

Since the June bombing and Saleh's departure, gas shortages, electricity outages and more violence have plagued the country. Many Yemenis now say they're growing tired of the revolution. They just want life to be back to normal.

"They said, 'OK why don't they finish the revolution?' They are right. We have to finish it. And we will," Karman says.

But how? Karman says it's not just the revolution that's to blame. Saudi Arabia and the U.S. should push harder for Saleh and his relatives to step down.

"Because Tunisia and Egypt, when they reached this point, all the international society stand with them. They said that their regime has to step down and has to leave now," she says.

But in Yemen, the international community is working to negotiate a solution with Saleh and his relatives. In addition, there is talk of finding a role for the older, more established political parties. Karman says they will do anything they can to secure positions in a new government.

Karman and her supporters have set up their own transitional government, ready to take the place of the president and the Parliament. It's a bold move that so far has not been formally recognized by the international community.

Karman says she has learned her lesson from Tunisia and Egypt. In those countries, the dictators fell fast, and then the hard work began.

In Yemen, she says the hard work is happening now — late into the night, in the squares.

"Yes, I want to go home. But I will not go home immediately after we finish everything. We will not repeat the mistakes that people in Egypt they did, when they leave the squares," she says.

Karman says she will stay in Change Square until democracy is guaranteed for Yemen — even if that takes seven more months, on the ground, in the tent.