Accessibility links
The Quiet Revolution In The Death Penalty Debate The Justice Department is reviewing its lethal injection protocols because of a shortage of a key drug. Authorities are also less likely to seek the death penalty for murderers of drug dealers. In a trend that's moved from the states to the federal level, things are getting quiet on death row. 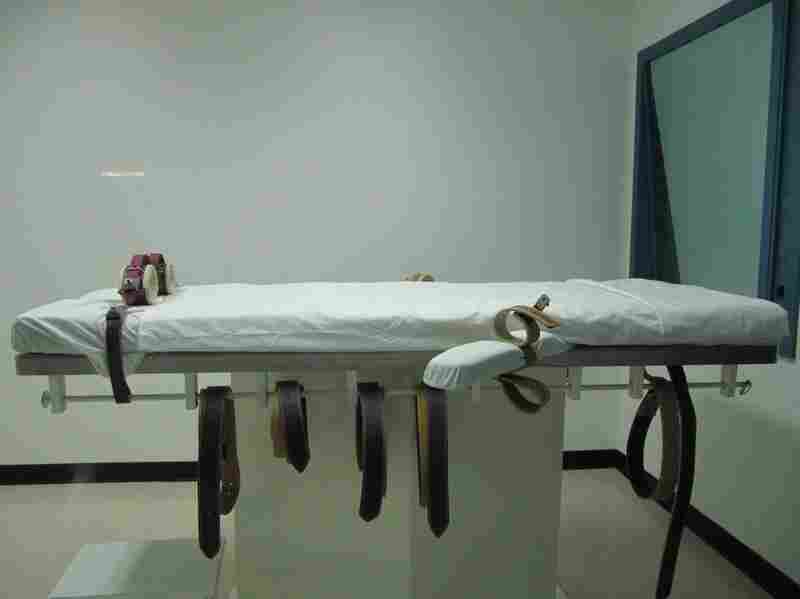 A shortage of a key drug for lethal injections has slowed the pace of executions. Nate Jenkins/AP hide caption

There are 58 people on federal death row in Terre Haute, Ind. But for now none appears likely to face the ultimate punishment, at least not on President Obama's watch.

The Justice Department is reviewing its lethal injection protocols because of a shortage of a key drug. While that study is underway, authorities have backed away from setting execution dates.

Over the last few years, a quiet revolution has overtaken the death penalty debate. Like many trends, this one started in the states and moved to the federal level, says death penalty expert David Bruck.

"I think it's fair to say that the federal government seeks the death penalty less often now than it did five or 10 years ago, but that's simply part of a national trend," says Bruck, a law professor at Washington and Lee University.

Just consider, Bruck says, a state quite close to the seat of national government.

"Virginia — which is the state that's executed the second largest number of people since the death penalty came back in the 1970s — has only added one new defendant to death row in the last three and a half years," he says.

And among those already sentenced to death, a lot fewer are actually being executed. One reason for that is a shortage of sodium thiopental, a main drug that states and the federal system use in executions.

The federal prison system told a judge last month they're still working through changes to the execution protocol because of that drug shortage and the changes aren't final. That court filing was first reported by Politico.

Until those changes are finalized, death row inmates like James Roane, convicted of taking part in gang murders in Richmond, Va. in the 1990s, won't get a new execution date.

Roane's lawyer, Paul Enzinna, is suing the prison system along with several other attorneys representing inmates on federal death row.

"The issue at the heart of our lawsuit is that the...question of the risk that the inmates being executed will suffer unnecessary pain," Enzinna says. "And that that is a violation of the Eighth Amendment," which prohibits cruel and unusual punishment.

That lawsuit is on hold while the court waits to hear about changes the federal prisons may make to the lethal injection protocol.

The last federal execution happened in President George W. Bush's first term, in 2003. Louis Jones Jr. was a military veteran convicted and sentenced to death for raping and killing a woman soldier.

But not everything related to the federal death penalty is stuck in neutral gear. Last month, after more than two years of study, the Justice Department quietly adjusted the directions it gives federal prosecutors who want to seek the death penalty.

The changes didn't get much attention, but they represent a turnaround in two main areas, Bruck says.

"This administration is much more willing to listen to what the local prosecutors who actually have to prosecute the cases in court are saying about when the death penalty should be sought," he says.

So federal officials in Washington are consulting more with prosecutors across the country. That follows a controversy from the Bush presidency when Attorney General John Ashcroft sometimes overruled the decisions of U.S. attorneys who chose not to seek the death penalty.

"The federal government should be very cautious about you know, intruding on areas that have traditionally been under state control and where it's the conscience of the community that determines this," Dieter says.

It also saves money, notes Dieter. When public defenders mount a death penalty defense in the federal courts, it costs more than $400,000 just for the trial, and that doesn't include the costs of prosecuting the case or handling appeals that can stretch on for years.