Accessibility links
Another American Looks At Why Americans Don't Care For Kate Bush Kate Bush's 53rd birthday provides an occasion for two writers to consider why the British art-rock singer/songwriter was never able to match her British success in the United States.

Another American Looks At Why Americans Don't Care For Kate Bush

Another American Looks At Why Americans Don't Care For Kate Bush 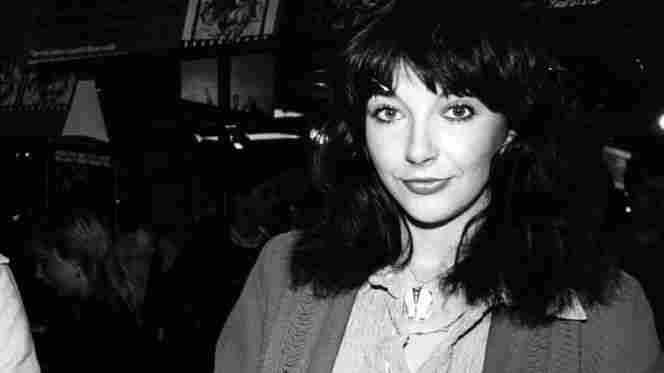 Seen here in September 1980, Kate Bush has long been wildly popular in the UK, but she's never enjoyed the same success in the United States. Chas Sime/Getty Images hide caption

Kate Bush turned 53 recently. If you're like most Americans, that means nothing to you.

At least, that's the claim set forth by Lee Zimmerman of the Broward/Palm Beach New Times. In a blog post published on Bush's birthday, he laments the lack of traction that the British singer/songwriter has experienced in the United States.

"Sat In Your Lap," from The Dreaming

It's a common, if bitter, way for Bush fans to pass the time. She's been a perfectly respectable commercial force in her home country: Every one of her albums (including the new Director's Cut, which finds her reworking old material) has gone platinum, gold or (oh, you Brits) silver. She's had a steady stream of hit singles, more than ten of them top 20, since 1978's "Wuthering Heights." Over here, she's been limited to one gold album (The Sensual World), one top 40 hit ("Running Up That Hill (A Deal With God)") and only two other visits to the Billboard Hot 100. (Three, if you count her angelic appearance on Peter Gabriel's stunning but chart-middling "Don't Give Up.")

"Don't Give Up," from Peter Gabriel's So

To some, that track record and a cult fanbase would be enough. But Zimmerman's frustrated by the disparity between her U.K. and her U.S. success, and he offers five reasons why Bush has never quite made it here. In that spirit of the kind of kindred fandom that can only be shared by two people who both love the same thing from the very core of their being and can (and will) furiously gabble on about it to one another all night long unless someone else shuts them up, I am going to rip his arguments to shreds.

She's too British. It's true that Bush, whose hometown has the veddy English name of Bexleyheath, never toned down her Britishness to universalize her appeal. Her music was cognizant (in ways obvious and not so much) of English music hall, sharp Romantic and Victorian streaks ran through her lyrics and she occasionally delivered her songs in a panoply of accents and vernacular. (See, for instance, the Cockney gangster narrating "There Goes A Tenner.") But if explicit Britishness alone were enough to sink a musical career in the United States, the following list would be nothing but gibberish to all but the most concerted Anglophile music fans: the Smiths, the Cure, Blur, Oasis, Pulp, the Clash, the Sex Pistols, the Kinks. Some carved out successful, sustained American careers. Some just had a hit or two. But all of them were super-British in one way or another, and all of them achieved a level of cultural visibility greater than Kate Bush.

She's too weird. During the time that Bush was putting out her best work, we made Cyndi Lauper a feminist icon and transformed Peter Gabriel from a peculiar art-rocker into a superstar with an album that featured cerebral oddball Laurie Anderson, Senegalese singer Youssou N'Dour and Bush herself. There may been a limited number of "weirdo" slots available, but we certainly weren't instinctively turning them away at the door.

She's too literary. Perhaps. She did, after all, not only wring a U.K. hit out of Emily Brontë but also successfully captured, in "The Sensual World," the eroticism that James Joyce infused into the word "yes." But maybe it's not her literariness, per se, but her theatricality. Her obsessions have included the stage ("Wow"), cinema (granted, it's an ostensibly low form saluted in "Hammer Horror," but it counts) and ballet ("The Red Shoes"), and not just within her lyrics. Her lone tour was a multimedia spectacle with dancers, films, costume changes and magic. (Back in 1979, it was performance art; now, it's Katy Perry.) Her videos followed suit and eventually became cinematic in scope, as evidenced by the clip for "Cloudbusting," featuring Donald Sutherland as her father. And rather than using her songs to bear her soul, she tends instead to inhabit different characters, many with their own unique voices; see, again, "There Goes A Tenner." A reader we could handle. An auteur we couldn't, at least not in the 1980s.

"Cloudbusting," from Hounds Of Love

We've already got a Tori Amos, thanks. And a Sarah McLachlan, though Zimmerman doesn't say that. The problem is, while he acknowledges that Bush had a jump on Amos, he skips over the fact that by the time that Amos appeared in 1992, Bush was pretty much already a lost cause in the U.S. The success of "Running Up That Hill" didn't carry over to its album Hounds Of Love, a best-of (which in the U.K. was a greatest-hits) didn't drum up interest in what people had been missing all those years and a switch in American labels from EMI to Columbia, which worked hard to break her with The Sensual World, seemed to have zero impact. After Amos went gold with Little Earthquakes, Bush released one more album before going into hibernation for a dozen years. Amos didn't steal her thunder because there was none to steal.

(It should, on the other hand, be mentioned that Amos's career can actually be read as evidence that Bush did succeed over here, in her way. I first learned about Amos through discussions on the Kate Bush USENET group rec.music.gaffa – "gaffa" being an obscure reference to a Bush song, code recognizable only to those in the know – where she was talked up with great enthusiasm. She and McLachlan proved that there was room for piano-playing women of a far artier bent than anything even Joni Mitchell or Laura Nyro could inspire. There's a solid case to be made that Bush laid the groundwork for that generation of performers, even if she didn't get to reap the rewards herself.)

She's too reclusive. That she is. After the aforementioned 1979 tour, she retired from live performance (save for the occasional one-off like the 1987 Secret Policeman's Ball). She also started taking longer and longer between albums, until the amount of time Bush spent gestating Aerial (her last album of all-new material) was only seven years less than the amount of time she spent gestating her entire career. (She was 19 when "Wuthering Heights" came out.) But while those certainly had their impact, it again doesn't explain why she was successful in her home country, where Aerial hit #3 and its lone single, "King Of The Mountain," reached #4. Reclusive though she may be, it didn't hurt her in England.

"King Of The Mountain," from Aerial

So now that I've lovingly shut down all of Zimmerman's arguments, how to explain Bush's relative lack of success in this country? Well, she certainly didn't fit any of the molds of what women were doing in pop music in the 1980s; only Madonna (who, for whatever it's worth, is a mere 17 days younger than Bush) was as chameleonic, but she was both more overtly sexual and more cannily club-oriented in a particularly dance-crazy decade. And Peter Gabriel notwithstanding, art rock wasn't exactly a ticket to mass success.

But it might be that Bush never broke through in the U.S. because she just wasn't that interested in it. Columbia certainly was, wanting to prove with The Sensual World that their new investment wasn't just a one-hit wonder. But looking back at Bush's career, there's a nagging sense that if American success was truly something she'd wanted, she would have booked those tours, done that press and schmoozed radio and MTV. She didn't, and as a result or not, she remains the province of a small group of highly devoted American fans.

The real question isn't why she never caught on the U.S. It's how she ever became popular in the United Kingdom.

"Love And Anger," from The Sensual World