Accessibility links
Why Cleaned Wastewater Stays Dirty In Our Minds Would you drink reused sewage water that had been declared safe? No? You're not alone. Engineers say processing wastewater to make it clean and drinkable can provide a plentiful source for places where water is in short supply. But the public often balks at the thought. The reason, experts say, is a phenomenon called psychological contagion. 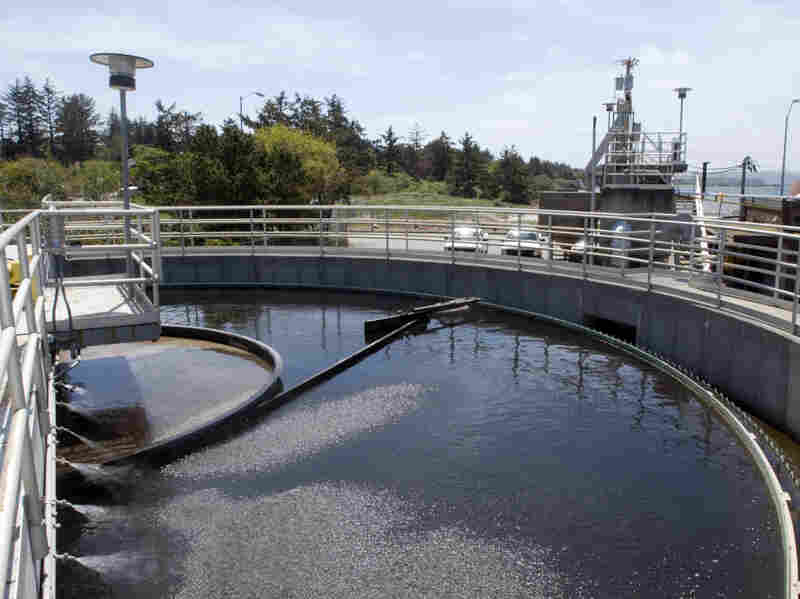 A boom sweeps around a tank at a sewage treatment plant in Coos Bay, Ore. Even though sewage water can be treated and cleaned, psychologists say getting the "cognitive sewage" out of the water is much more difficult. Jeff Barnard/AP hide caption 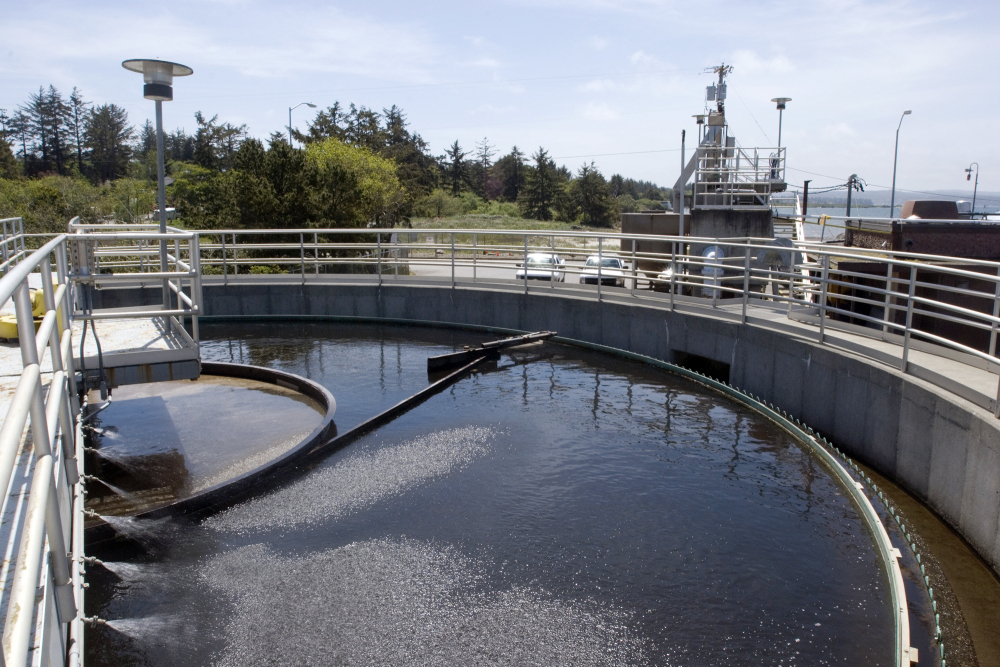 A boom sweeps around a tank at a sewage treatment plant in Coos Bay, Ore. Even though sewage water can be treated and cleaned, psychologists say getting the "cognitive sewage" out of the water is much more difficult.

Brent Haddad studies water in a place where water is often in short supply: California.

Haddad is a professor of environmental studies at the University of California, Santa Cruz. About 14 years ago, he became very interested in the issue of water reuse.

At the time, a number of California's local water agencies were proposing a different approach to the state's perennial water problems. They wanted to build plants that would clean local wastewater — aka sewage water — and after that cleaning, make it available as drinking water. But, says Haddad, these proposals were consistently shot down by an unwilling public.

"The public wasn't really examining the science involved," Haddad says. "They were just saying no." This infuriated the water engineers, who thought the public's response was fundamentally irrational, Haddad says.

"That's what I would hear at these water agency meetings," Haddad says, "these very frustrated water engineers saying, 'My public is irrational! They are irrational! They simply won't listen!' "

For those unfamiliar with water reuse, it's a system by which water that has been used in your toilet or sink or shower is purified through a variety of technological processes that make it clean enough to drink. Then it's reused in the same location: It's used to water fields. It's put in reservoirs. It can also be used for drinking water.

It is quite difficult to get the cognitive sewage out of the water, even after the real sewage is gone.

From the perspective of the water engineers Haddad was talking with, this kind of reuse was a no-brainer. The benefits were clear, and the science suggested that the water would be safe. Clean Water Action, an environmental activist group, also supports reuse for drinking water, though it thinks there should be national regulatory standards.

But according to Haddad, no matter what the scientists or environmental organizations said, the public saw it differently: They thought that directly reusing former sewage water was just plain gross.

"A scientific answer is not going to satisfy someone who is feeling revulsion," says Haddad. "You have to approach it in a different way."

That's why Haddad turned to a nonprofit called the WateReuse Research Foundation for funding for a study. He wanted to figure out more about the public's response to reused water, and for that he needed additional people. This was a job, Haddad concluded, for psychologists.

Carol Nemeroff is one of the psychologists Haddad recruited to help him with his research. She works at the University of Southern Maine and studies psychological contagion. The term refers to the habit we all have of thinking — consciously or not — that once something has had contact with another thing, their parts are in some way joined.

How Wastewater Gets Cleaned

In most large cities around the globe, sewage and wastewater gets processed at a treatment plant.

First, it passes through a filter to remove large materials like tree limbs, trash and leaves. Next up is the primary sedimentation tank, where sludge settles to the bottom and lighter liquids like grease, oil and soap rise to the top. The surface is skimmed off while the sludge is pumped away to a separate treatment facility.

Then it's on to another tank, where oxygen is bubbled in, enabling bacteria to break down any organic matter in the wastewater. After that comes another filtration — sometimes through sand or carbon.

During the final stage, the water is disinfected — by the addition of chlorine, hydrogen peroxide and other chemicals and by running it past ultraviolet lights. It's then drained into a nearby water supply, like a river, or pumped into the ground, where it is reintroduced into the below-ground water supply. Months to years later, water utilities extract the water, which has now mixed with the wider supply, from wells. After standard testing and treatment for drinking water, this reclaimed water ends up in houses.

"It's a very broad feature of human thinking," Nemeroff explains. "Everywhere we look, you can see contagion thinking."

Contagion thinking isn't always negative. Often, we think it is some essence of goodness that has somehow been transmitted to an object — think of a holy relic or a piece of family jewelry.

And according to Nemeroff, there are very good reasons why people think like this. As a basic rule of thumb for making decisions, when we're uncertain about realities in the world, contagion thinking has probably served us well. "If it's icky, don't touch it," says Nemeroff.

The researchers led by Haddad wanted to figure out more about how our beliefs about contagion in water work. And so they recruited more than 2,000 people and gave them a series of detailed questionnaires that sought to break down exactly what would have to be done to wastewater to make it acceptable to the public to drink. The conclusion?

"It is quite difficult to get the cognitive sewage out of the water, even after the real sewage is gone," Nemeroff says.

Around 60 percent of people are unwilling to drink water that has had direct contact with sewage, according to their research.

But as Nemeroff points out, there is a certain irony to this position, at least when viewed from the perspective of a water engineer. You see, we are all already basically drinking water that has at one point been sewage. After all, "we are all downstream from someone else," as Nemeroff says. "And even the nice fresh pure spring water? Birds and fish poop in it. So there is no water that has not been pooped in somewhere."

So what do you need to do to make reused water acceptable to the public? 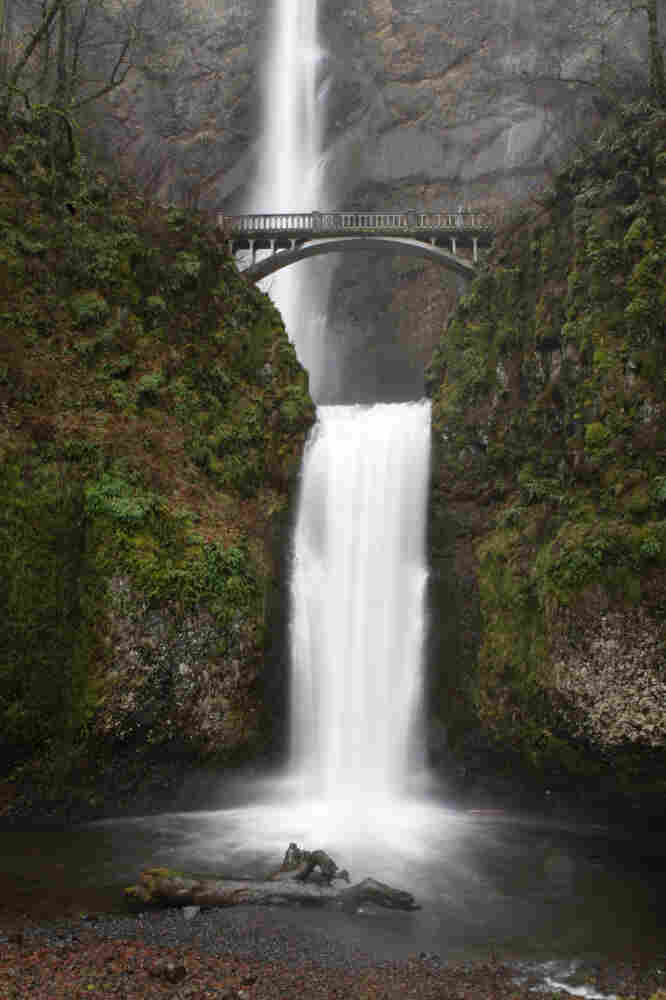 Co-mingling treated, cleaned wastewater with a natural water supply is one way to remove the psychological contagion from sewage water. "It's an identity issue, not a contents issue," says psychologist Carol Nemeroff. Above, Multnomah Falls in Oregon. Rick Bowmer/AP hide caption

Nemeroff says you need to change the identity of the water so that it's not the same water. "It's an identity issue, not a contents issue," she says, "so you have to break that perception. The water you're drinking has to not be the same water, in your mind, as that raw sewage going in."

One of the best ways to do that, Nemeroff and Haddad and their colleagues concluded, was to have people cognitively co-mingle the water with nature.

Apparently, if you have people imagine the water going into an underground aquifer, for example, and then sitting there for 10 years, the water becomes much more palatable to the public. It budges even those most unwilling to drink the water.

This, Haddad says, is why people find it acceptable to get their water supply from their local river, even though that river water at one point mingled with the sewage of the town upstream. People see river water as natural.

But, in fact, Haddad says, putting treated water back into nature can make it less clean.

"That's an interesting twist to all of this," Haddad says. "When you do introduce a river or even groundwater ... you run the risk of deteriorating the water that's been treated. You can make the water quality worse."

In any case, say Nemeroff and Haddad, it's certainly true that our psychological relationship to water and our beliefs about contagion have an enormous impact on water policy in this country. We spend millions and millions of dollars for water that is cognitively, if not actually, free of contamination.