Accessibility links
America's 'Secret Campaign' Against Al-Qaida America's anti-terrorism strategy has evolved in the years after the Sept. 11 attacks. New York Times reporters Thom Shanker and Eric Schmitt explain some of the tactics used by the United States over the past decade to disrupt al-Qaida both in real life and online. 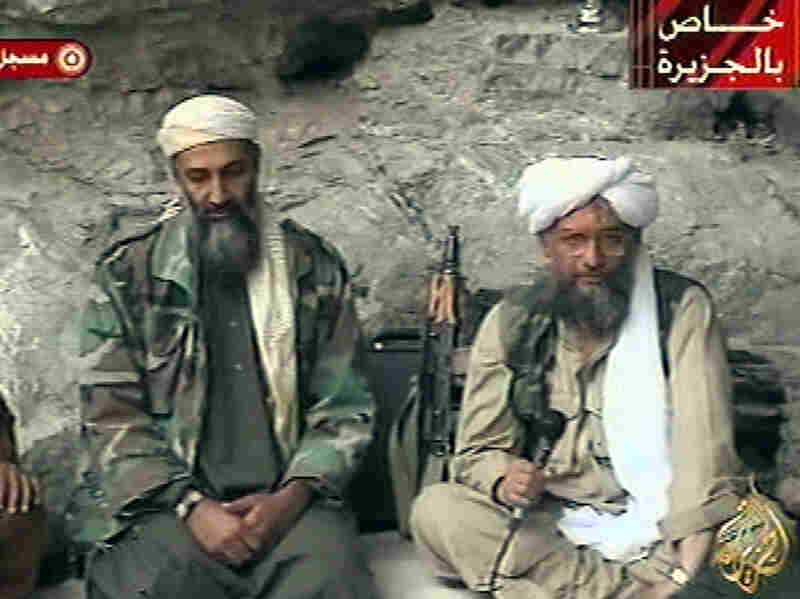 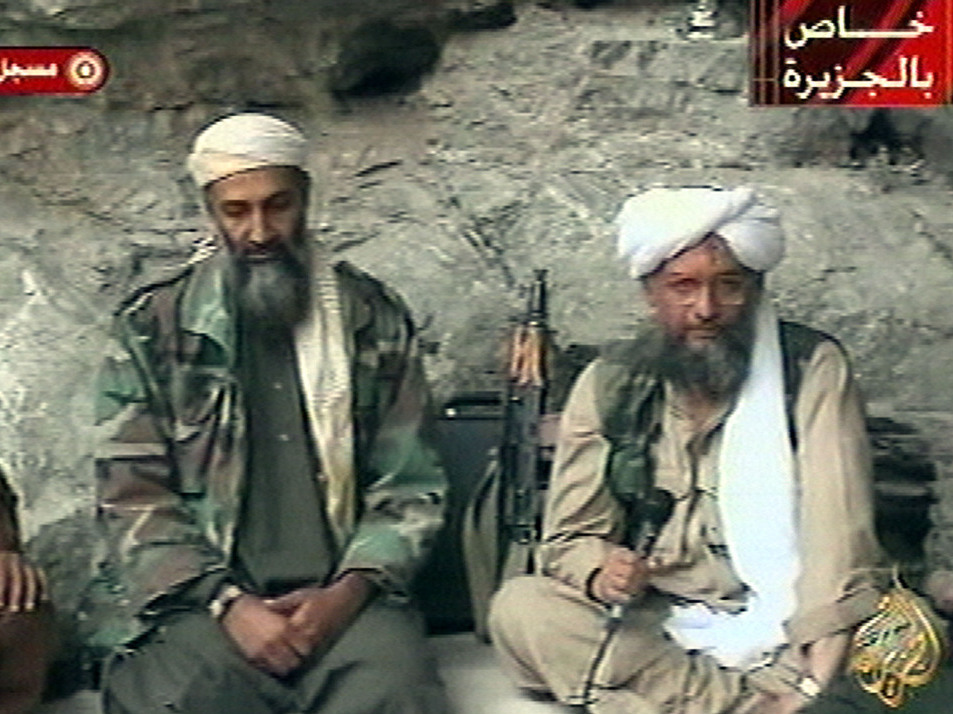 Osama bin Laden (left) and his top lieutenant, Egyptian Ayman al-Zawahiri, are seen at an undisclosed location in this television image broadcast Oct. 7, 2001. In Counterstrike, reporters Thom Shanker and Eric Schmitt say the United States tried to disrupt al-Qaida by attacking the organization's financiers and middlemen.

After the Sept. 11 attacks, America responded immediately with a militarized strategy to defeat al-Qaida. But it quickly became clear to analysts in the Pentagon that using warfare alone couldn't counter the terrorist group. In 2005, a group of eclectic analysts at Central Command began looking for a broader, more holistic strategy they could use to target al-Qaida and Osama bin Laden.

"They turned to the history books and began looking at Cold War-era deterrents that had kept a tense nuclear peace — but a peace nonetheless — with the nuclear power of the Soviet Union over the decades," says New York Times veteran reporter Thom Shanker. In Counterstrike: The Untold Story of America's Secret Campaign Against Al Qaeda, Shanker and his colleague Eric Schmitt detail how the Defense Department and U.S. spy agencies adapted several Cold War-era techniques, including many aimed at deterring attacks before they happen. The government also created new innovative strategies, including hacking into Jihadist websites and disrupting financial networks, for their battle against al-Qaida and Osama bin Laden.

On Tuesday's Fresh Air, both Shanker and Schmitt join Dave Davies for a discussion about the tactics used by the U.S. over the past decade to disrupt al-Qaida both in real life and online. Some of those tactics, says Shanker, included focusing on the middlemen instead of the leadership within the al-Qaida network.

"It takes a network to carry out a terrorist operation, and not everyone in that network is willing to make the ultimate sacrifice," Shanker says. "You look at the gunrunners, the weapon suppliers and, most importantly, the financial backers. There's some very interesting missions that went on in Afghanistan to go after the financial networks that transferred money for the operations. ... It shut down the money flow for months." 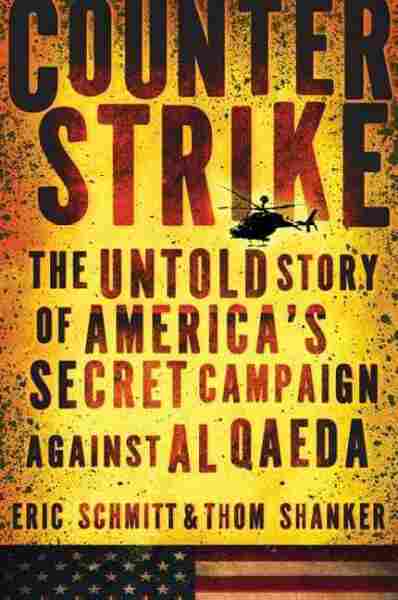 The Untold Story of America's Secret Campaign Against Al Qaeda

by Eric Schmitt and Thom Shanker

A Treasure Trove Of Information

In December 2006, U.S. military members out on patrol serendipitously captured a briefcase full of thumb drives and files outlining al-Qaida's battle strategy to counter the surge that had just been ordered by the United States.

"It showed the safe houses, it showed where all of the weapons were stored, and it showed that al-Qaida really understood the Iraqi people more than the Americans did," says Shanker. "Because among the chief targets al-Qaida was going to attack during the surge were the bakeries, and they were going to target the garbagemen, because they wanted the garbage to pile up to show that the U.S. was failing. ... [The U.S.] was able to reshape the entire force footprint and [one general described the seizure] as 'almost like the ability of the Allies to break the Enigma codes of the Nazis during World War II.' "

Had the briefcase been captured a few years earlier, says Shanker, the United States might not have realized the importance of the findings. But a change in strategy put intelligence officers on the ground alongside members of the military.

"Given the global nature of this threat, intelligence agents were on the ground," he says. "There was actually a member of the NSA [National Security Agency] who was at the headquarters when this material landed, so he could immediately begin sorting it and looking through it."

Another raid turned up an extensive al-Qaida index of its members and their countries of origin. Gen. Stanley McChrystal, who was the commander of the Joint Special Operations Command at the time, decided it would be better to publish the information rather than leave it highly classified.

"It was really an unprecedented step by McChrystal and got the information out there quicker and had many more eyes analyzing this information in a much broader way," says Schmitt. "It reflected the idea that it needed a 'whole government' approach to combat terrorism — not just the narrow bands that existed before 9/11. ... Gen. [David] Petraeus told us on record that there was no single operation during his entire period of command that cut down the number of suicide bombers as much as this effort did ... using the seized intelligence. ... It was all about translation, assessment and pulling together exploitation through diplomatic channels to stop suicide bombers from flowing ... into Iraq."

When President Obama was inaugurated in 2009, he continued to use many of the innovative tactics that the Bush administration found effective in Iraq and Afghanistan in 2007 and 2008, says Schmitt. Obama's administration also worked to counter citizens' perception of al-Qaida in the Middle East.

"[The idea was] to undermine its credibility and to point out, through credible voices in the Muslim community — not through American voices — that the vast number of causalities in suicide bombings in Iraq and Afghanistan were innocent men, women and children — Muslims themselves," says Schmitt. "So this became part of what is still an evolving counter-messaging strategy by the United States."

In addition, both the Bush administration and the Obama administration focused their attention on the Internet, where al-Qaida does its recruiting, fundraising, operational planning and propaganda.

"What the American military intelligence can do is forge the watermarks or certification of official al-Qaida postings," says Shanker. "American cyber technology is so advanced that they can have a near perfect re-creation of an al-Qaida message — and what they're doing from time to time is going on jihadi websites and posting conflicting and contradictory orders, statements that raise doubt about who the jihadis should follow and who is really in charge ... and the goal is to really disrupt the entire network by sowing dissent and confusion. We've been told they've had some great success at that."

As the terrorists' strategy continues to evolve, says Shanker, the United States must be ready to constantly change tactics in order to keep a step ahead.

"While there's still a desire for an attack with mass casualties like 9/11, and while terrorist networks are still seeking a weapon of mass destruction, they're changing to a strategy of multiple smaller attacks," he says. "Think of it as throwing pebbles into the cogs of the Western economic machine. If you throw enough pebbles, some will get through and those cogs will stick."

Thom Shanker is a correspondent for The New York Times covering the Pentagon. He has conducted numerous reporting trips to Iraq and Afghanistan. While a foreign editor at The Chicago Tribune, he covered the wars in the former Yugoslavia, NATO policy and nuclear smuggling.

Eric Schmitt is a senior writer at The New York Times covering terrorism and national security issues. He has shared two Pulitzer Prizes, for coverage of the transfer of sensitive military technology to China, and for his coverage of Afghanistan and Pakistan.