Actor Wendell Pierce Takes To Twitter To Talk About 'The Help'

Actor Wendell Pierce Takes To Twitter To Talk About 'The Help' 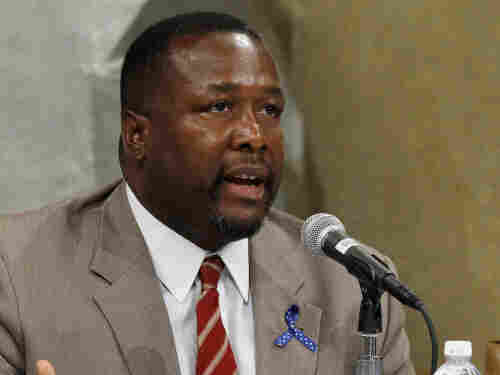 Wendell Pierce, seen here at a Department Of Justice panel discussion in May, spoke through his Twitter account yesterday about the film The Help. Chip Somodevilla/Getty Images hide caption

Twitter takes an understandable beating for pushing everyone to speak in 140-character bursts, and for not encouraging proofreading, and for not always encouraging civility, and for ... quite a number of things, really.

But that doesn't mean it can't be enlightening at times, like when actor Wendell Pierce — who stars on Treme, and who played Bunk Moreland on The Wire, and who has generally gotten around to an amazing degree over the last 20 years, saw The Help with his mother yesterday.

He first noted, "Actors never cease to amaze me. What they do with the material given to them is craft." But then his criticisms of the story became more pointed: "The movie The Help was painful to watch. This passive segregation lite was hurtful. I kept thinking of my grandmother who was The Help." He went on to reveal that his mother told him for the first time when they saw the movie that she, too, had been "The Help" and had raised white children.

Pierce said his mother was hurt and insulted by the film, because her experience was, in fact, significantly worse than what was portrayed in the film (what he was referring to as "Jim Crow lite"). "My mother said it was a good story," he said, "but she knows a different reality." (For another view, check out the All Things Considered interview with actress Octavia Spencer.)

It's worth reading the entire exchange that he had with people who did and did not agree with him at his Twitter account. As sometimes happens when people are forced to be concise, he found some very direct and powerful imagery to convey his meaning: "Watching the film in UptownNewOrleans to the sniffles of elderly white people while my 80year old mother was seething, made clear distinction." At the same time, though, he was polite but direct with those who liked the story and the film. As he put it to one commenter, "I think [my mother] was hoping it would express her pain and anger. When it didn't she opened up. Maybe the film did it's job."