Accessibility links
Penn Jillette's 'God, No!': An Atheist Libertarian On Tricks, Bacon, And The TSA Penn Jillette's new book God, No! presents a lively portrait of the author's libertarian, atheist, sometimes hedonist approach to life. But at times, it seems showy and assaultive. 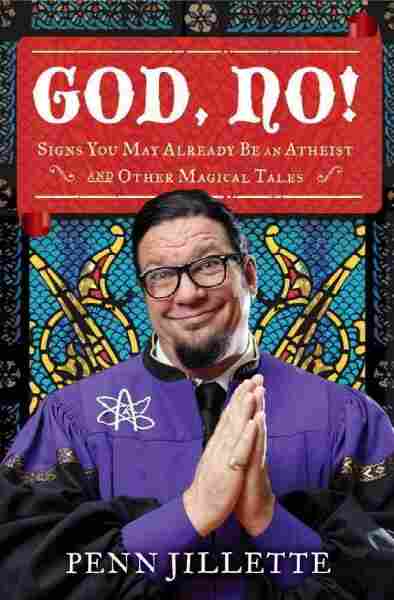 Signs You May Already Be an Atheist and Other Magical Tales

Title
God, No!
Subtitle
Signs You May Already Be an Atheist and Other Magical Tales
Author
Penn Jillette

[Hear Penn Jillette discuss God, No! on Talk Of The Nation.]

Penn Jillette gets around.

He's half of the magic duo Penn & Teller, which is still headlining in Vegas. He had a Showtime program called Penn & Teller: Bull - - - -, which examined things he considers ridiculous, like alien abductions, bottled water, gun control, the Endangered Species Act, alternative medicine, and ESP. He's a writer, he's a comic, he's an inventor, and he was absolutely terrible on Dancing With The Stars.

He's also an atheist libertarian and an Ayn Rand fan who throws clothing-optional parties and never, ever drinks or does recreational drugs.

There's a lot to unpack when you're dealing with this particular guy, and that's the way it feels to read his new book, God, No!: Signs You May Already Be An Atheist And Other Magical Tales. Certainly, some parts of God, No! are thoughtful and provocative. Jillette poses the question to religious adherents: If God asked you to kill your child, would you do it? He proposes that anyone who says no is an atheist, and anyone who says yes is a menace. That may not be a position with which very many agree, but he puts it out there and he explains what it means to him. When he explains why he thinks tattoos and fake breasts are great for the same reasons (but only really cartoonish fake breasts), it doesn't necessarily persuade me, but it's a point of view I haven't heard before.

His discussion of libertarianism is similar: He doesn't believe government has the right to do anything you wouldn't enforce at gunpoint, so (for instance) stopping crime is a legitimate government function, but public libraries are not, since he wouldn't hold a gun on anyone and force them to create a library. Again, some will agree and some won't, but his commitment to this principle is at least something he's prepared to defend.

The vibrancy of Jillette's writing and storytelling — from Vegas stories to sex stories to kid stories to stories of "helping" religious people abandon their religions — is certainly impressive. The man can really tell a story: he is wonderful at finding the right vivid image, the right hilarious detail, and the right confession of his own folly at particular moments.

He's also a very smart guy in a lot of ways. There are moments of crystal-clear insight about kindness, art, magic (David Blaine haters will get an enormous kick out of Jillette's unmerciful takedown of Blaine's "buried alive" stunt), and show business. He is a man who has spent a great deal of time thinking about his philosophy of life, and almost anyone who has put a lot of time and effort into his guiding principles can be interesting to listen to.

The problem with the book is that that same vibrancy, that same exuberance, eventually becomes performative and exhausting. Jillette's adoration of profanity is shared by plenty of great writers, and I absolutely believe in a "well-tempered F-word," as I talked about here. But there are places in this particular book where it feels showy and assaultive, as if the millionth "f--k" will make a duck drop from the ceiling. As much as I enjoy profanity wielded for proper effect, that's how much I don't like it slathered on just to add a gratuitous sense of rebellion, just to rile up the kind of people you want to dislike your book.

Some of the stories are the same: they aren't as interesting as they are dirty. (And there's nothing wrong with a dirty story if it's interesting, provided everyone is on notice that the book contains dirty stories, which this one emphatically does.) His story about visiting a San Francisco bathhouse, for instance, takes forever and is played mostly for the opportunity for a straight guy to talk about gay sex a lot, and when the punch line arrives, it's really not as satisfying as it should be.

God, No! is at its best when it combines Jillette's taste for high-level philosophy (whether you agree with him or not) with dips into his very unusual life (his house had a sex dungeon that he turned into a playroom, if that tells you anything). It's at its worst when his defiance of convention seems to have become, in its own way, very punishing toward other people's individual rights. He proudly tells a story about threatening violence toward a social worker caring for his father to get her to lie to his father the way he wanted her to, and doesn't seem to recognize that for many, his explicit threat to her based on explicitly pointing out how much bigger he was than she was has something in common with the intrusions on privacy and personal autonomy that so offend him. (His TSA rant is predictably vigorous.)

If you've liked Jillette in the past, if you like his no-holds-barred, unadorned, impatient, proudly intolerant (make no mistake; he thinks religious people are dangerous and misguided and agnostics are just chicken) style, the odds are that you're going to like the book. He's delivered a giant, unapologetic dose of — as advertised — libertarianism and atheism and nudism and magic and food and coiled anger at all the people he thinks are ruining the world for people like him. It's a fearless and vigorous piece of writing, and I liked a good part of it myself. I just wish the unflinching eye he casts on society were cast inward a bit more.

Jillette wrote about his atheism for the series This I Believe in 2005, and you can read that essay here.