Accessibility links
Kitchen Window: Hold The Mayo ... While I Get A Spoon There are people who don't like mayonnaise, and there are people who just think they don't like mayonnaise. Meet sneaky hostess Doreen McCallister, who likes to experiment with secret ingredients. She's learned to save full disclosure till after they've asked, "Wow, that's delicious — what's in it?"

Hold The Mayo ... While I Get A Spoon

Hold The Mayo ... While I Get A Spoon 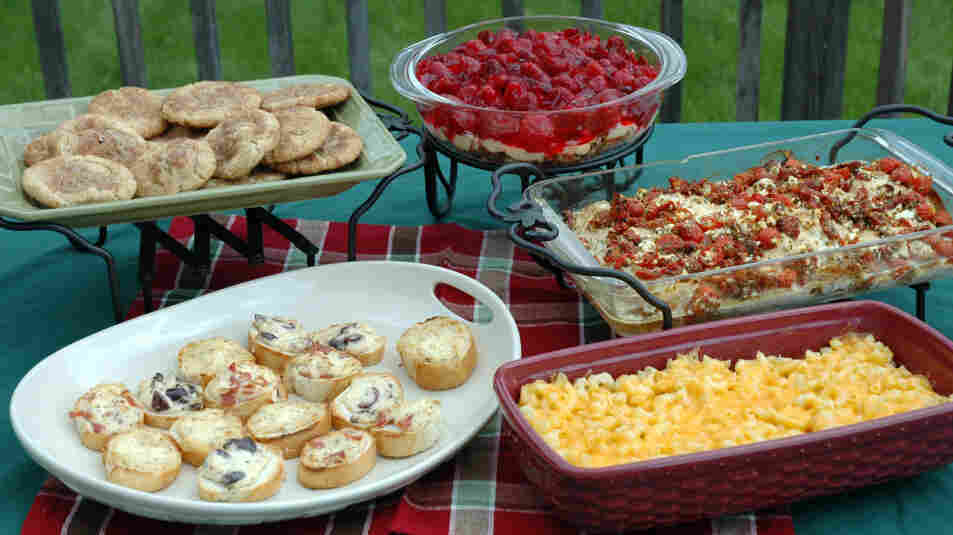 Each Of These Things Is A Little Like The Other: There's a common ingredient mixed into these dishes ranging from appetizer to dessert. It's the much-maligned condiment, mayonnaise — but you'd never guess it. Trust us. Doreen McCallister/NPR hide caption

Get recipes for Layered Pretzel Salad, Mediterranean Chicken, The Last Appetizer Recipe You'll Ever Need, Mac & Cheese, and Not Your Mother's Snickerdoodles.

Know your audience: It's a maxim that television network officials and public speakers know well. Parents are familiar with it, too, as they try to sneak some healthy ingredient into a not-so-healthy dish. Even Chef Boyardee has a whole ad campaign built around hiding a full serving of vegetables in each one of its meals.

Making food with secret ingredients — that's my avocation. Some people have hobbies like knitting, philately or collecting baseball cards. I like to build recipes around a food item you wouldn't normally find in those dishes. Dill pickles in cake, for example.

I love the idea of camouflage cooking. Pardon me while I take off my apron, put on my camo and grab my jar of mayonnaise. That's right — mayonnaise.

Prepare to be shocked and awed.

Poor mayonnaise. Most people think of it as a condiment. Instead of spreading it with a knife, I think measuring cup.

I was hooked after I saw a chocolate cake recipe that had mayonnaise in it. It was a recipe for "The Ultimate Chocolate Cake" using Hellmann's Real Mayonnaise.

The longer I stared at the picture of the moist cake, and the more I ruminated on the idea, it seemed perfectly fine to put mayonnaise in a cake. After all, mayonnaise is just the emulsification of eggs, vinegar and oil.

But not everyone would agree. That's why it's important, when experimenting in the kitchen, to know your audience — who is going to be trying the finished product.

I have learned that not everyone has the stomach — no, make that the mindset — to try something new. Which is why I lie to some people about what's in my treats.

Let's be clear: I don't lie to people who have food allergies. That would be evil and could lead to a lawsuit.

For more than 20 years, Doreen McCallister has been keeping her NPR colleagues guessing about what's in her baked goods. Recipes like Tomato Soup Cake, Mayonnaise Cake and Velveeta Fudge piqued her interest, and she started experimenting with her own secret-ingredient recipes. Even when she brings something "normal" to work, everyone demands to know: "What's in it? No, really — what's in it?"

I lean more toward impishness. And unless my co-workers are hard-core taste-testers, I suddenly develop amnesia when asked, "What's in the cookies?"

My Fickle Pickle Cake didn't go over very well, only because I blabbed and told people the name. Had I kept my mouth shout, more people would have loved it.

Making food with secret ingredients — that's my avocation. Some people have hobbies like knitting, philately or collecting baseball cards. I like to build recipes around a food item you wouldn't normally find in those dishes. Dill pickles in cake, for example.

Since I had my aha moment with the chocolate cake, I've put mayo in other cake recipes, chicken casseroles and mashed potatoes — to name a few.

I've also seen it used in recipes for pies, breads and pimento cheese. Of course, there are also the not-too-surprising recipes for potato and macaroni salad.

For convenience, I use store-bought mayonnaise. Sure, I could make my own but why bother? I like the idea that when I open a new jar, it will be good for a long time in the refrigerator.

If you make your own — providing it turns out the way you want it — it will only last a few days. Also, it means you will be working with raw eggs, and that carries a risk of salmonella. Commercially prepared mayonnaise uses pasteurized eggs. However, it has preservatives and other items not included in the homemade version. So, pick your poison.

I thought I'd try my hand at making mayo, so I got out my ragged go-to favorite cookbook. It had many recipes for flavored mayonnaise. I rechecked the index thinking I had missed the page with the mayo recipe on it.

Turns out, it didn't have a from-scratch mayo recipe. Even 30 years ago, it was easier to open a jar.

Nowadays, plenty of people have opened that jar, so to speak — and many delicious foods exist with mayonnaise as a secret ingredient. But some people still refuse to try them.

So, to remind myself that I need to tell a fib from time to time, I hold on to an email from a co-worker.

When I told him about the poor reception for my pickle cake, he wrote, "The next time you throw together a pickle brine, mayonnaise or ground-glass coffee cake, simply say, 'Come and get it, y'all'!"

Keep those words of wisdom in mind when you try my secret-ingredient mayonnaise recipes.

Here's a twist on an old picnic favorite: It's part snack food, part creamy goodness and part old-school jiggly fun. Sure, you've had it before. But I bet mayonnaise wasn't hidden inside. If you are looking for a more formal dessert, leave out the pretzels and fill a dessert glass with the cream filling and top with the strawberry gelatin mixture. Use extra strawberries to garnish along with some reserved cream mixture. 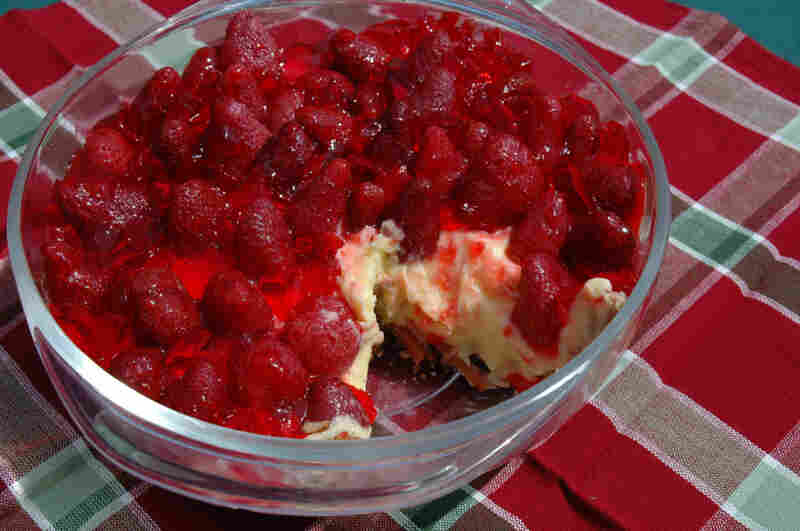 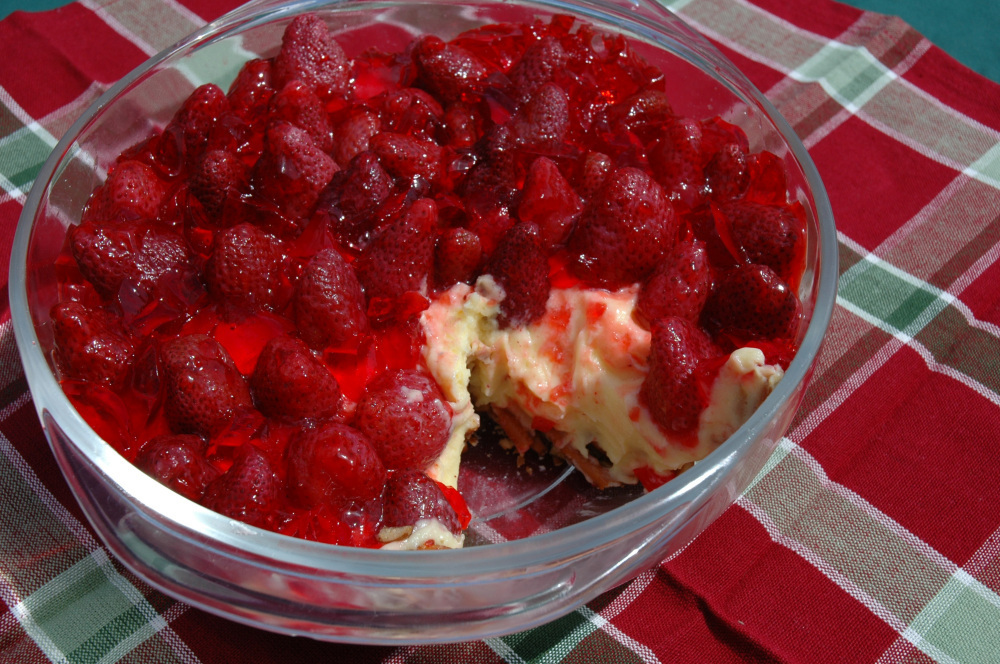 3 cups crushed pretzels (not too fine; you want people to know they were pretzels)

Preheat oven to 400 degrees. Mix ingredients and press into the bottom of a greased 9-inch glass dish. A glass dish shows off the different layers, and a square one makes it easier to serve portions. Bake for about 8 minutes. Allow to cool.

Add boiling water to gelatin and stir to dissolve. Add the strawberries and stir. Allow mixture to cool at least 15 minutes in the refrigerator. Arrange berries on top of cream layer, spooning gelatin into spaces among the berries. Refrigerate for at least 30 minutes before serving.

In the kitchen, most people are either a chef or a baker. I'm a baker. But my use of mayonnaise in baked goods has helped me transition to chef with this chicken dish. 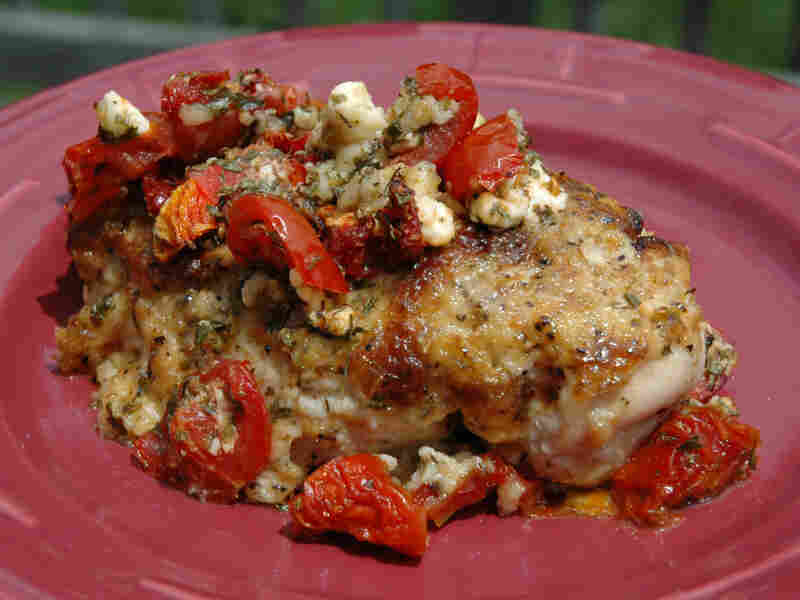 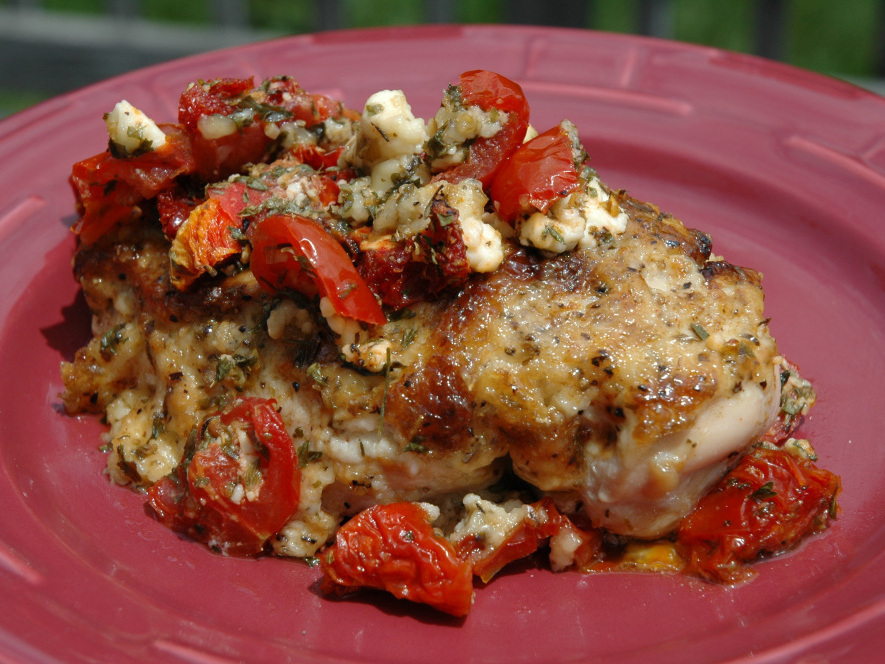 3 large boneless, skinless chicken breasts (cut in half to promote even cooking)

Preheat oven to 350 degrees. Season both sides of chicken with poultry seasoning and place on a broiler pan.

In a bowl, mix together mayonnaise, garlic, oregano, lemon juice, capers and pepper. Spread over chicken breasts. Bake for 25 minutes.

Combine feta cheese, grape tomatoes, sun-dried tomatoes, oregano and parsley in a bowl. Sprinkle on top of chicken. Bake another 10 minutes, or until internal temperature of the chicken is 165 degrees.

Mix all ingredients together. Make extra for other uses and store in an airtight container.

Guests stopping by at the last minute, and you have nothing to offer them? The day can be saved if you check your refrigerator shelves. There's a good chance the makings of a party are already there. If you don't add any extra ingredients, the basic cheese recipe will keep for about a month in the refrigerator. 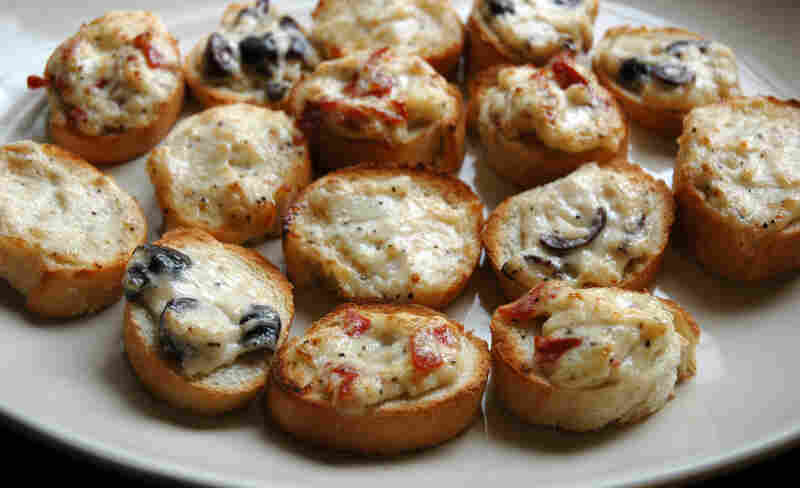 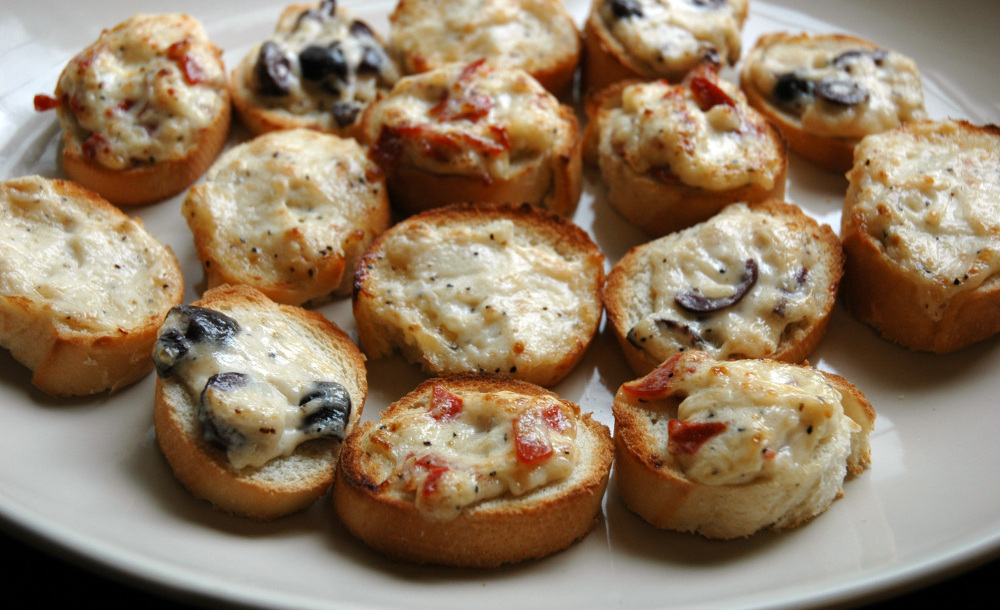 1 loaf baguette or other crusty bread

Combine mayonnaise, cheese, onion and pepper in a bowl. Slice bread evenly. Spread about 1 teaspoon of the mixture to cover each slice of bread.

Arrange slices on an ungreased cookie sheet and place under the broiler for approximately 3 minutes, until lightly browned. Serve immediately.

I could eat macaroni and cheese seven days a week — as long as the recipes were different each day. This mayonnaise recipe qualifies as different. No one will know that what makes it so smooth is the mayo and Greek yogurt. 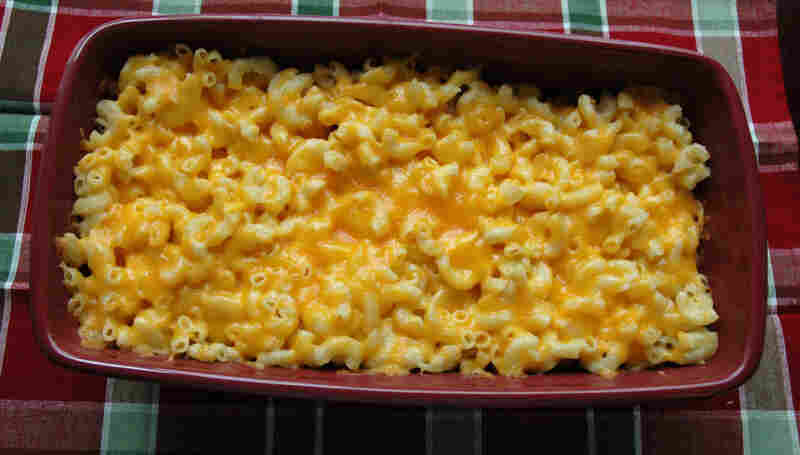 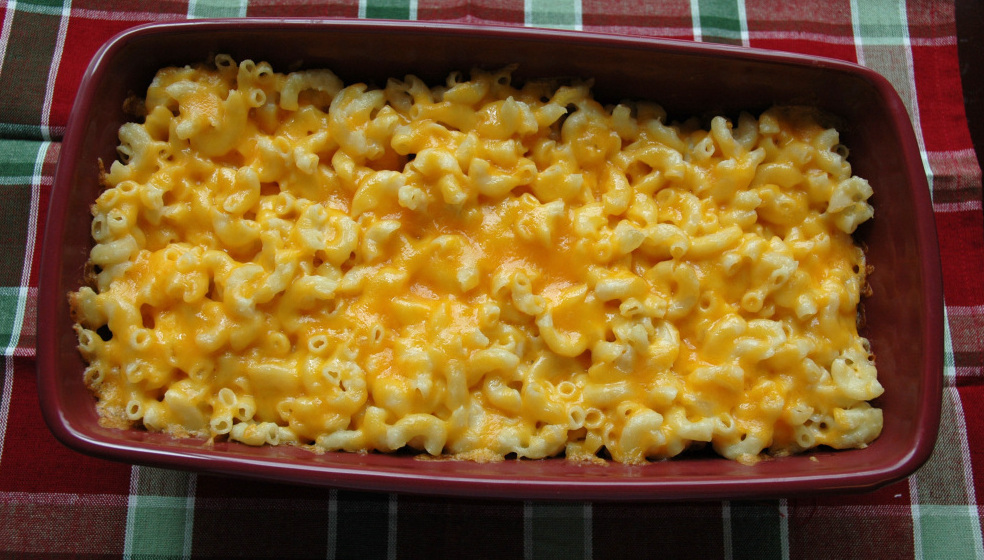 1 (8-ounce) box macaroni, cooked according to directions on box

Preheat oven to 350 degrees. In a large bowl, mix together the cooked macaroni, mayonnaise, yogurt and first two cheeses, and season with salt and pepper to taste. Spread the mixture evenly in a greased 2-quart baking dish. Bake for 25 minutes. Sprinkle sharp cheddar on top, and return to the oven for a few minutes, until melted.

Not Your Mother's Snickerdoodles

It "mayo" not be easy to improve on snickerdoodles, but this mayonnaise-infused recipe does it. I recommend making it with the candy tucked inside (see note at the bottom). 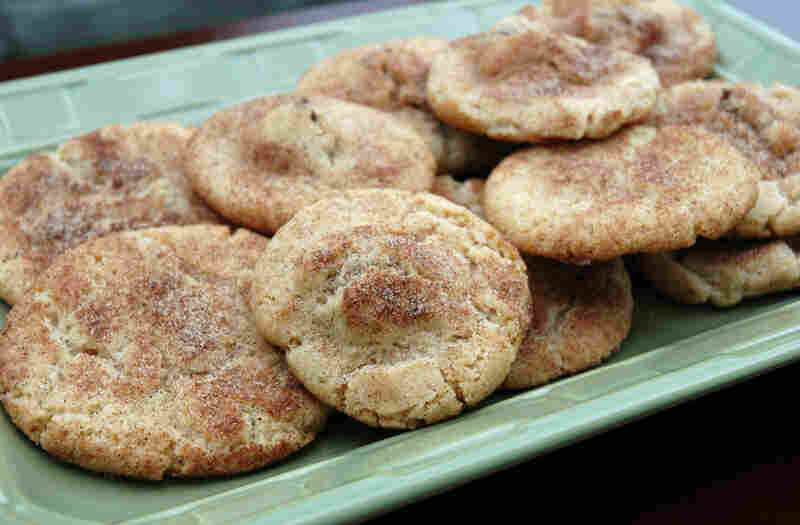 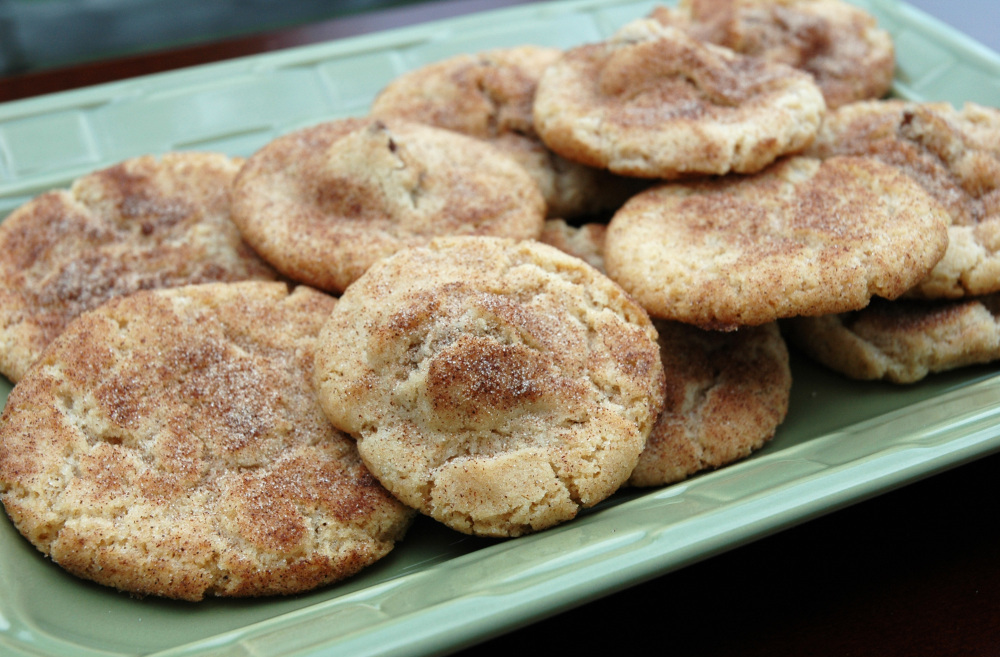 Place 12 on a greased baking sheet, spaced evenly. They will spread out. Bake for about 12 minutes or until lightly brown.

Once out of the oven, sprinkle cinnamon sugar on top of the baked cookies. Allow to cool for a few minutes on the cookie sheet before placing on a wire rack.

Kick-It-Up-A-Notch version: In the center of each dough ball, put a Hershey Kiss or macadamia nut. Make sure the dough surrounds the candy or nut. The cookie will flatten as it bakes, but the surprise stays hidden inside.