Accessibility links
Big Business Freezes Out New York Ice Company Natuzzi Brothers has been selling ice since 1959, but it's having trouble expanding because three big companies now control almost half of the wholesale ice market. 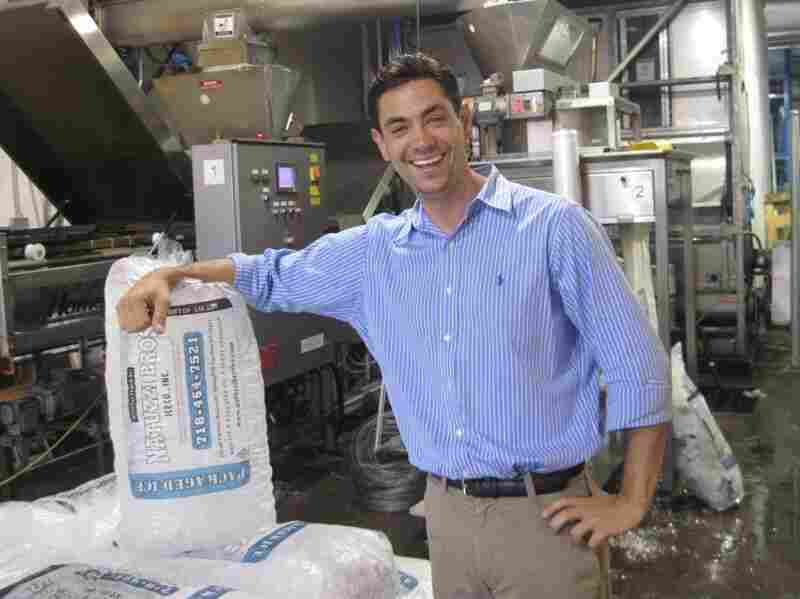 Given the obstacles faced by his ice company, John Natuzzi Jr. says he doubts whether the family business will pass on to a fifth generation. Beth Fertig/WYNC hide caption 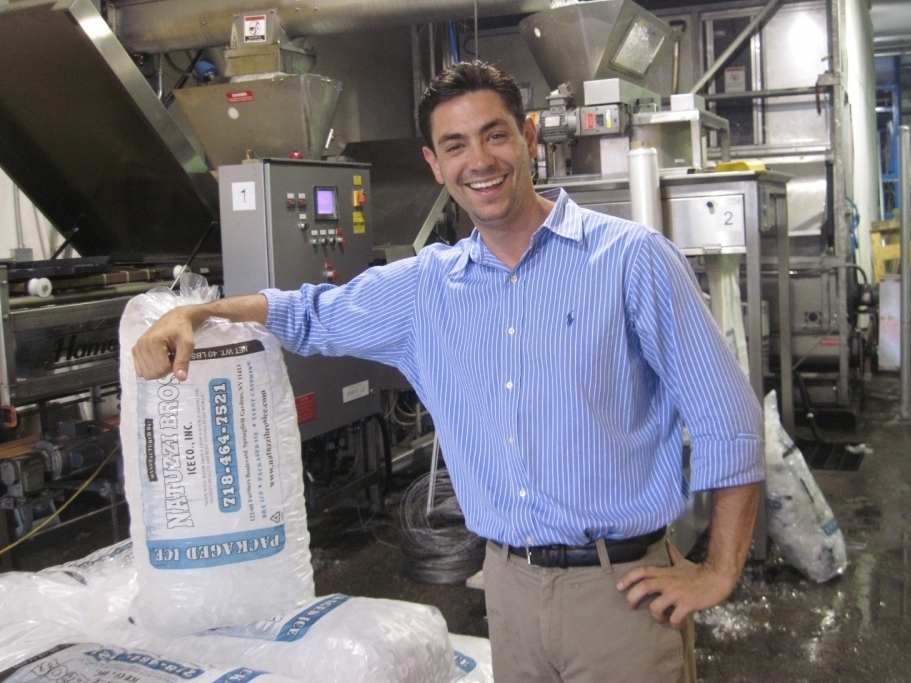 Given the obstacles faced by his ice company, John Natuzzi Jr. says he doubts whether the family business will pass on to a fifth generation.

Small businesses are critical to the economy, especially as a source of jobs. But the recession has been hard on them: Consumers aren't spending, and banks aren't lending.

And one ice manufacturer in Queens, N.Y., is trying its best to not be frozen by the competition.

For John Natuzzi Jr., ice is the family's business. The 26-year-old has been working for Natuzzi Brothers Ice Co. since he was 19, and he's now taking over for his ailing father.

Tall, blue cylindrical tanks stand on the factory floor, freezing purified city tap water. The ice is chopped up while still in the tanks and then sent to a bagging machine.

When Natuzzi's great-grandfather started this company more than a half-century ago, the trade was dominated by Italian immigrants who delivered big slabs of ice to homes, bars and restaurants. Today, Natuzzi Brothers makes its own ice and sells it to stores, blood banks, the U.S. Open tennis tournament and the airline JetBlue.

What It Does: Sells ice

Revenues: $6 million to $7 million a year

On a loading dock at JFK International Airport, workers haul Natuzzi's ice out of freezers onto catering trucks. The ice will be used by thirsty JetBlue passengers.

"It's close to, I'd say, about 5 percent of our business," Natuzzi says. "They bring in the revenue, to say the least."

Natuzzi says the company pulls in $6 million to $7 million a year in revenue, and he'd like to make more. One way to do that would be to sell to big supermarkets.

But he says that's not really possible.

At a Waldbaum's supermarket in Long Island, Natuzzi points out a freezer filled with ice made by a big Canadian competitor, Arctic Glacier.

"Most of the products now are outsourced and coming from out of state and coming from bigger organizations," he says. "And it's really not beneficial for any small business, because they're not able to do business within the community."

In the past 15 years, the number of ice wholesalers like Natuzzi Brothers has shrunk from about 3,000 to just around 500, according to the International Packaged Ice Association.

Executive Director Jane McEwen says that's because chain stores like Walmart don't want multiple vendors. "When they went to consolidated purchasing, it caused a lot of the wholesale ice producers to lose their local Walmarts as a customer," she says.

McEwen says almost half of the wholesale ice market is now controlled by three big companies.

Most of the products now are outsourced and coming from out of state and coming from bigger organizations. And it's really not beneficial for any small business because they're not able to do business within the community.

These big players are so dominant, they've been investigated by antitrust regulators for price fixing, and two of the companies paid settlements.

Something People Will Always Need

This level of consolidation is unusual, says Awi Federgruen, a professor at Columbia Business School in New York. It's partly because of the nature of the product.

"Relatively speaking, as you can imagine, a product like packaged ice — how much of a difference really could there be between one type of packaged ice and the other?" he says.

Natuzzi Brothers isn't just up against big ice companies. A lot of its competition comes from gas stations, convenience stores and any small retailer with an ice maker that can bag its own product.

After growing up in the ice industry, Natuzzi appears pretty cool about the hard road ahead. He says ice is something people will always need. So he's trying to increase business with existing customers while also seeking out new ones.

"We've partnered with some ice cream distributors, and they're able to utilize their networks," he says, "and it's working well for us. You know, you've got to be creative nowadays."

Still, he says he can't even think of passing his family's company on to a fifth generation — if there is one someday.

"I wouldn't imagine passing this along to anybody at the moment given the state of the economy," he says. "It's a lot of different things out there that we need to really put under our belt before I would consider doing something like that."