Accessibility links
Caribbean Coral Catch Disease From Sewage A bacterium from our guts is killing coral reefs throughout the Caribbean. Leaky sewer systems are to blame, according to a new study. But the city of Key West has shown that upgrades to sewage treatment systems can stop the disease — as well as make the waters safer for swimmers. 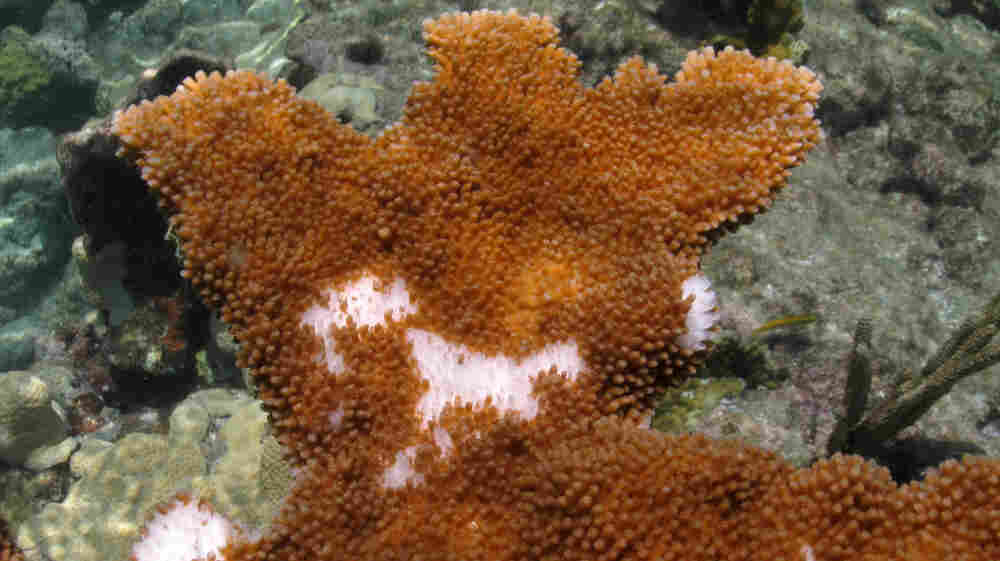 White pox disease on a frond of the endangered elkhorn coral on Carysfort Reef in the Florida Keys. The bacteria are overlying the coral tissue, exposing the coral's white limestone skeleton underneath. James W. Porter/University of Georgia hide caption

Human beings occasionally get diseases from animals, such as swine flu, rabies and anthrax. A new study finds that humans can also spread disease to wildlife, with grim results. A bacterium from our guts is now rampaging through coral reefs in the Caribbean.

Those reefs were already in slow decline, but they took a huge hit starting in 1996, when a disease called white pox appeared in the Florida Keys.

"Since that time, elkhorn coral — the species it affects — has declined 88 percent in the Florida Keys," says Kathryn Sutherland, a reef ecologist at Rollins College in Florida. "And we've seen similar declines elsewhere in the Caribbean."

The coral is named for its resemblance to elk antlers, and is among the most important reef-building species in the Caribbean. Sutherland and her colleagues soon found a culprit for the die-off — a bacterium called Serratia marcescens. It also happens to cause disease in human beings, notably hospital infections. But the scientists couldn't prove cause and effect. 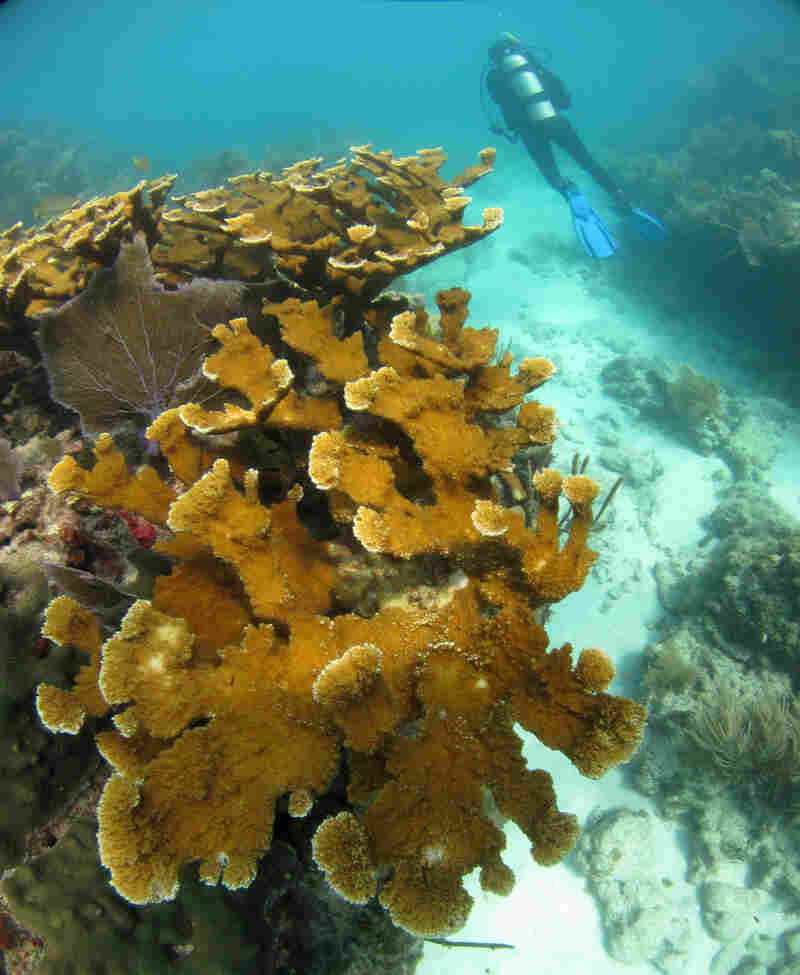 Healthy elkhorn coral is found on Sombrero Reef in the Florida Keys National Marine Sanctuary. In the past 15 years, almost 90 percent of elkhorn populations in the Florida Keys have died, landing this once-common coral on the endangered species list. James W. Porter/University of Georgia hide caption 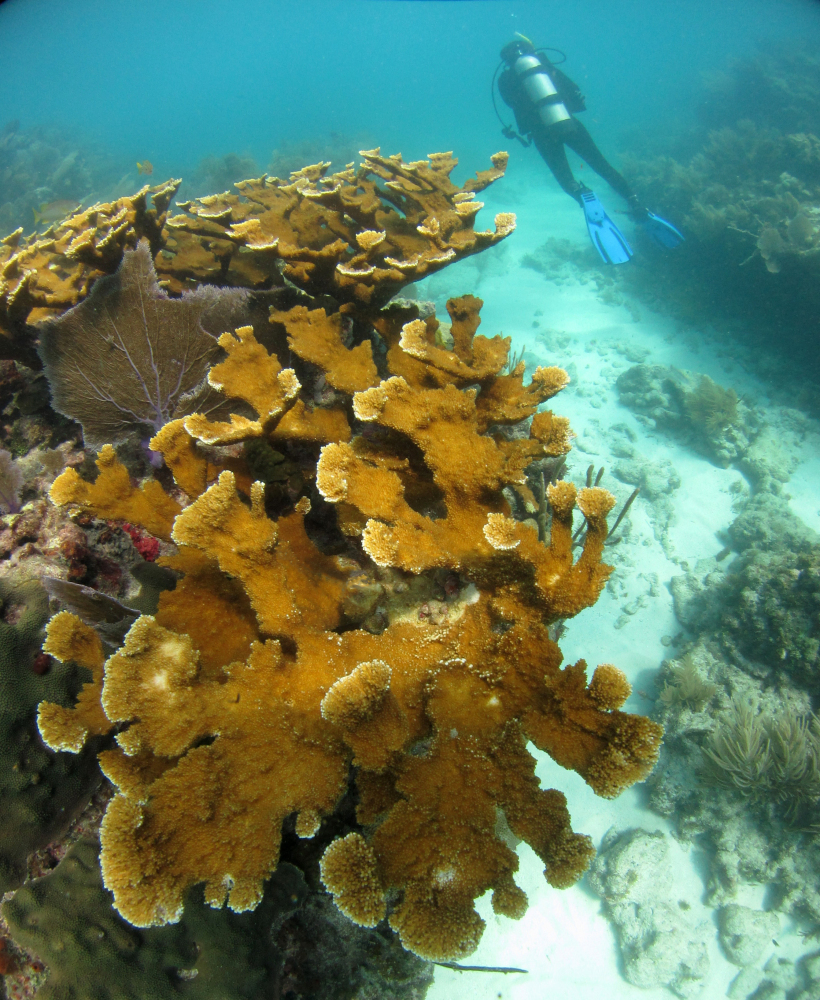 Healthy elkhorn coral is found on Sombrero Reef in the Florida Keys National Marine Sanctuary. In the past 15 years, almost 90 percent of elkhorn populations in the Florida Keys have died, landing this once-common coral on the endangered species list.

"In 2002, we could only speculate that human waste was the source of the pathogen because the pathogen is also found in the guts of other animals," such as deer, Sutherland says.

So she and some colleagues exposed the coral in the laboratory to bacteria extracted from sewage. As they report in the journal PLoS ONE, the coral got the pox within days.

"That gave us definitive evidence that white pox disease is caused by a pathogen found in human sewage."

Traditionally, we think of diseases moving from animals to us, but "this is almost a man-bites-dog story," says James Porter at the University of Georgia, a co-author of the study.

"This is a very rare and unusual evolutionary triple jump," Porter says. The bacterium "went from humans to the lower invertebrates — coral. It went from the terrestrial environment to the marine environment. And then it went from the anaerobic [low oxygen] conditions of our stomach to the fully oxygenated conditions on the reef."

Porter says they are still trying to explain exactly how the bacterium makes coral sick, and why white pox appeared so suddenly and viciously. The good news is those answers aren't needed to protect coral. You can just keep the germ away. And, happily, that's been happening along the Florida Keys.

Jay Gewin, utilities manager in the city of Key West, says residents there voted to upgrade their leaky sewer system. It was not done to save coral per se, but to get rid of health warnings that were keeping the tourists away.

"In the early 2000s when this was such a problem, every single beach in the city of Key West would have an advisory," Gewin says.

Those health warnings on the beach are now rare, thanks to a sophisticated new wastewater system that cost the city more than $70 million.

"The wastewater is treated to the highest level in the state of Florida, and then it goes into a deep injection well, where the treated final water product is sent thousands of feet down into the ground," Gewin says.

Eventually it may seep back up into the ocean, but he says by then it's clean. The biologists say that since the new system was installed, there haven't been any further die-offs of elkhorn coral around Key West. Other towns along the Keys are now in the process of cleaning up their act, too.

"But this is a problem Caribbean-wide," Sutherland says, "and there's a widespread lack of wastewater treatment in the wider Caribbean region."

And that's bad news for the elkhorn coral. Due largely to the disease spreading from humans, it's been tagged as vulnerable on the endangered species list.