Accessibility links
A Potential Tipping Point In Libya Rebels fighting the regime of Moammar Gadhafi claim to have taken control of Zawiya, a key coastal city near Tripoli. If true, that could mean Gadhafi's main supply line to Tunisia could be cut off.

A Potential Tipping Point In Libya

A Potential Tipping Point In Libya 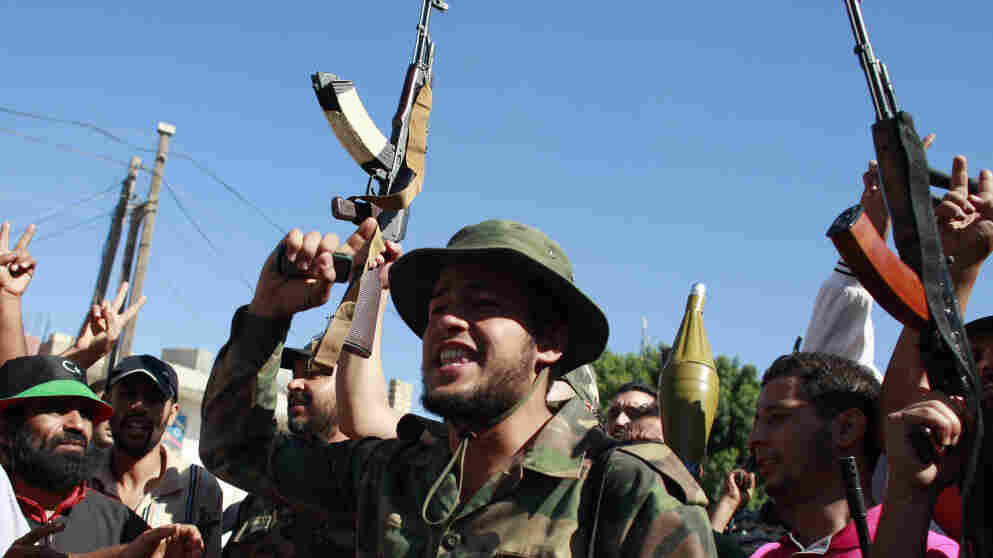 Rebel fighters celebrate on Aug. 14 after taking partial control of the coastal town of Zawiya, 30 miles west of Tripoli, the capital. If the rebels can establish full control of the town, it would cut Moammar Gadhafi's main link to the outside world. Bob Strong/Reuters /Landov hide caption 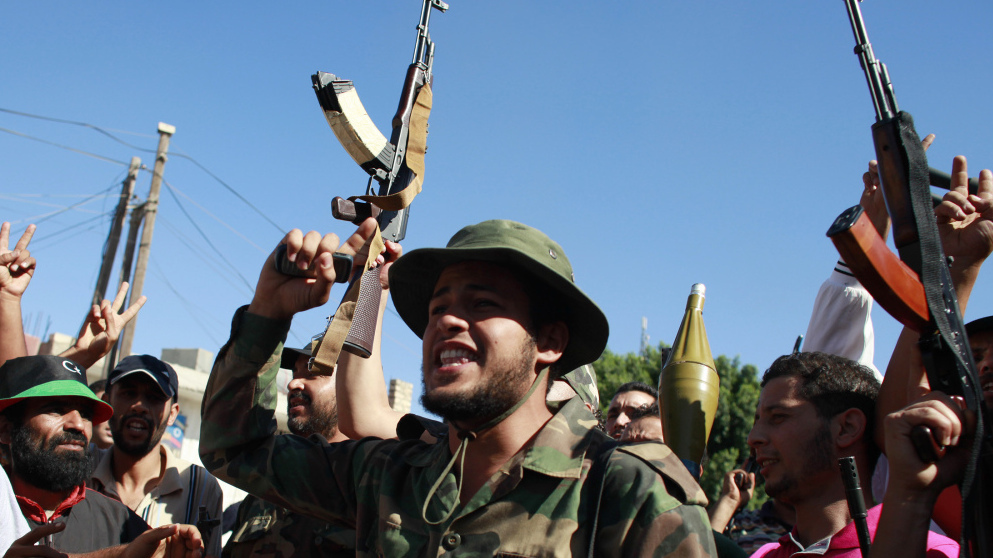 Rebel fighters celebrate on Aug. 14 after taking partial control of the coastal town of Zawiya, 30 miles west of Tripoli, the capital. If the rebels can establish full control of the town, it would cut Moammar Gadhafi's main link to the outside world.

After weeks with little movement on the battlefront, Libyan rebels fighting Moammar Gadhafi's troops appear to be gaining both territory and momentum.

Rebel leaders are claiming control of parts of Zawiya, a strategically important coastal city some 30 miles to the west of Tripoli, Libya's capital. Firm control of Zawiya would allow the rebels to cut off the government's most important supply line, from Tunisia.

More fighting was reported Wednesday for control of the oil refinery in Zawiya — the last major source of income and fuel for the Gadhafi regime.

For perspective on these developments, NPR spoke with Dirk J. Vandewalle, a professor of government at Dartmouth College. Vandewalle has written or edited several books about Libya, including A History of Modern Libya.

If the rebels have been able to capture Zawiya, how significant would that be?

Vandewalle: It's very important, for two reasons essentially. Zawiya is really the only major city that stands between Tripoli and the Tunisian border. The Gadhafi regime gets the overwhelming amount of its supplies through Zawiya. If you can choke off Zawiya, you're choking off most of the major goods.

Also, it has the only refinery to which the regime has access. If you can take that, that cuts off the only real flow of its income.

Can goods still come in through the port at Tripoli?

Goods can come in as long as there are not weapons. There is a weapons blockade.

But given the fact that it's a war zone, the insurance rates have become so high that a lot of ships won't go in there. That's become very expensive and unreliable at this point.

Will the rebels be able to hold Zawiya once it's firmly in their hands?

What we've seen so far throughout the fighting in Libya is that the fighting zigzags back and forth. The rebels take territory and then the regime takes it back.

But the bottom line is that the rebels are gaining strength and there's a diminishment on the government side, so that puts the advantage with the rebels at this time.

The war has dragged on for months without any clear resolution. Is it possible that we are at or nearing a tipping point in favor of the rebel side?

It may very well be. What we've seen until now is a stalemate, and even the NATO intervention wasn't pushing the balance toward the rebel side.

If they hold on to Zawiya, it really could be a tipping point. It's a sign that the rebels are getting stronger and that they can hold a city near Tripoli. They're gaining strength and tipping the balance to their advantage at this point.

Can the rebels take Tripoli? Or would a negotiated settlement become more likely if it becomes a city under siege?

The United Nations is trying to bridge those two sides and there are talks right now. But unless the Transitional National Council in Libya [the rebel leadership] engages in more diplomatic statesmanship, the end logically is going to be a military takeover of Tripoli, which is not good for the country, and it's not good for the TNC.

Why do you say that would not be good?

If you look historically at the antagonism between east and west, it's going to look just like 1951 when the country was created, with the east imposing its will on the west. A negotiated settlement, where the TNC can prove itself to be made up of diplomatic statesmen, would be much better.

There have been a number of reports lately about factionalism breaking out among the rebels. How big an issue is that going to be?

What we have emerging is a proto-government not really in control of the process and certainly not capable of imposing its direction on all these factions that exist.

The factionalism on the Transitional National Council side has really been growing. The biggest harbinger of what is to come is the death of [rebel military leader Abdel Fattah] Younis, who was killed, it turns out, by a rogue faction on the TNC side. That has sparked a number of developments including the fact that the [rebel] Cabinet has resigned.

That fault was a split along tribal lines. We're also seeing fault lines emerging between young rebels who are actually doing the fighting and the older leaders who are basically sitting on the sidelines in Benghazi [the rebel capital].

[Rebel Prime Minister Mahmoud] Gebril, the main political figure, hasn't really been in Benghazi. From what I gather he's afraid of being assassinated.

If Tripoli were to fall, we'd see a greater emergence of these factions. We could see more chaos rather than a unified government taking over.

What would NATO's role be at that point? Western nations have recognized the Transitional National Council as Libya's legitimate government. But the U.N. Security Council mandate calls for the protection of civilians. Would NATO have to protect civilians in Tripoli from harm in a rebel military advance?

That's one of the real weaknesses of the whole NATO involvement. They are to protect civilians. Now the civilians to be protected are on the Gadhafi side. If you have massacres, then the whole NATO mission is going to look like a sham.

When you spoke of growing factionalism, that suggests that once the war is over, things are going to remain messy.

The way things stand now, that is the most likely scenario. That's why the TNC should be prodded to do some negotiated settlement and not feel emboldened to proceed militarily.

They may win the war but they may lose the bigger battle, which is reforming and reshaping Libya. If they go in by military means, that doesn't augur at all well for the future.