Accessibility links
Why Does The U.S. Sneeze When Europe Gets A Cold? The debt crisis in Europe is one of the underlying causes of recent wild swings in U.S. stock markets. U.S. banks hold billions in investments in European nations' debt, so any doubts about Europe's soundness send ripples across the Atlantic. 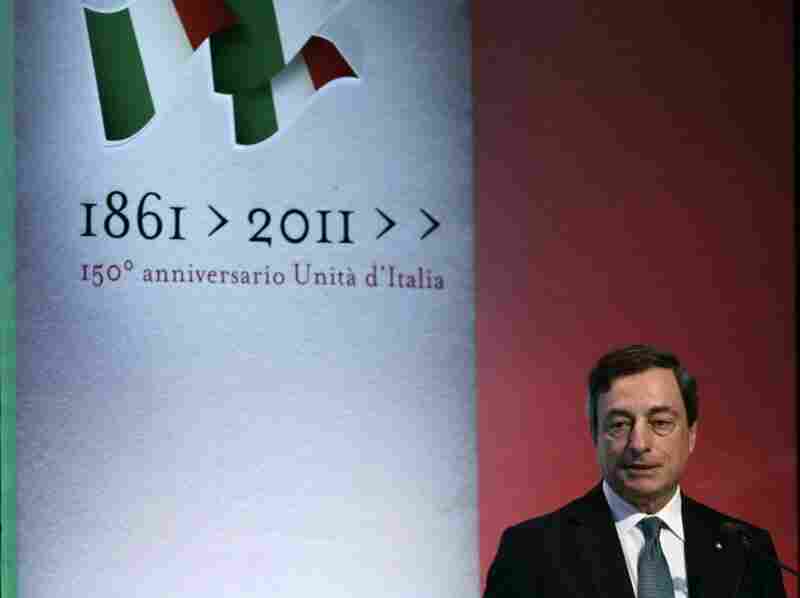 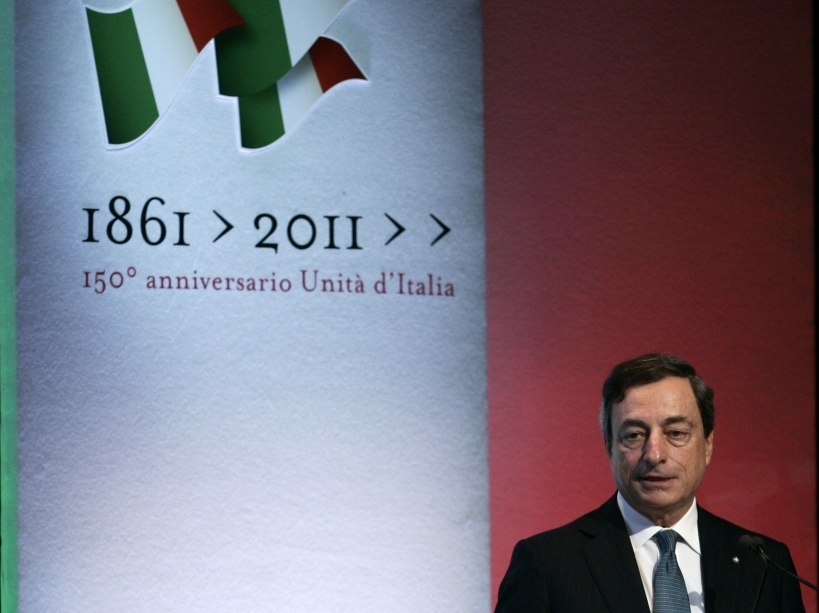 Bank of Italy Gov. Mario Draghi speaks to bankers in Rome last month. Financial market participants worry that Italy will be the next big shoe to drop in Europe's debt crisis.

The crisis in Europe is one of the underlying causes of recent wild swings in U.S. stock markets. U.S. bank stocks in particular suffer badly with any sign that Europe's debt crisis might be worsening.

But the U.S. financial sector's vulnerabilities in Europe are hard to quantify.

"There's a certain amount of knowledge in terms of we can quantify — certain areas of exposure — but the real problem is the unquantifiable, not known," says Jan Randolph, director of sovereign risk for IHS Global Insight. "A lot of investors, a lot of banks, simply don't know the interconnections, who holds what and who's connected to whom."

In Europe, unlike in the U.S., national debt is generally held in banks based in that country. So a large chunk of Greek debt is held by Greek banks, and Irish debt is held by Irish banks.

"As soon as one of the national government bond markets fails, so does the majority of banks in that country," says Jacob Kirkegaard, a research fellow at the Peterson Institute.

But the damage isn't isolated. French and German banks held about $27 billion in Greek bonds, according to March 2011 data from the Bank for International Settlements, which tracks bank holdings.

The U.S. banks held less than $2 billion by comparison, but they are big holders of Spanish and Italian bonds, holding about $34 billion, according to a Federal Reserve survey.

Banks by nature do a lot of business with each other. They're a bit like mountaineers roped up, climbing a mountain. If one gets wobbly, the others get frightened.

That $34 billion represents the U.S. financial sector's direct investments in Spanish and Italian bonds. But that's actually only a small part of its overall exposure. Experts say U.S. banks are more vulnerable in indirect ways that are harder to quantify.

"Banks by nature do a lot of business with each other," Randolph says. "They're a bit like mountaineers roped up, climbing a mountain. If one gets wobbly, the others get frightened."

That fear has manifested in the marketplace in the form of a higher LIBOR, or London Interbank Offered Rate. That means banks are charging more to lend to each other largely because of the shakiness of European banks, Randolph says.

A Question Of Confidence

Another way the systems intersect is through the derivatives market, where U.S. financial institutions are particularly heavy traders of credit default swaps.

Those swaps, which were also popular prior to the subprime mortgage meltdown, effectively function as insurance. Experts say U.S. financial institutions may be insuring a lot of European debt against default. But because there's no central tracking system, no one knows how big that vulnerability might be.

So in the end, Randolph says, quantifying the U.S.'s exposure to Europe's debt crisis is just an educated guess.

The Peterson Institute's Kirkegaard says the money the U.S. has parked in Europe isn't even his biggest worry. "The biggest impact would be one of confidence," he says.

Europe is, after all, also the U.S.'s biggest trading partner. And Kirkegaard says worsening troubles in Europe mean stock market disruptions and further crackdowns on lending by U.S. banks.

With the U.S. economy already perilously close to slipping back into recession, it is simply not strong enough to withstand a European shock, whatever the actual size, he says.