Accessibility links
Can Low-Key Sen. Murray Guide Supercommittee? Sen. Patty Murray (D-WA) is co-chairwoman of the bipartisan committee charged with cutting more than $1 trillion from the deficit. Some Democrats worry that the mild-mannered former teacher won't be tough enough for the high-stakes negotiations. 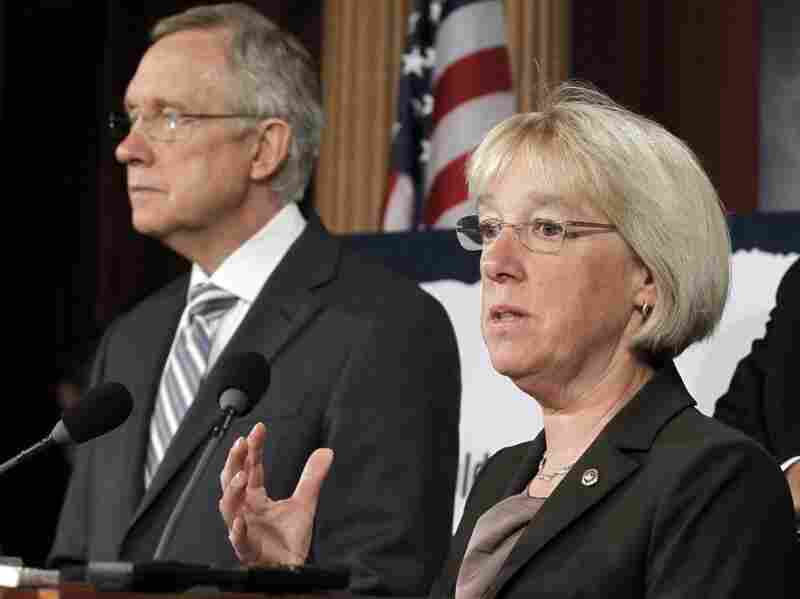 Get ready to hear the word "supercommittee" a lot this fall. It's the bipartisan committee created by the recent debt ceiling deal, and it has until Thanksgiving to figure out how to cut more than $1 trillion from the deficit.

One of the panel's leaders is Democratic Sen. Patty Murray of Washington state. With Congress in recess, Murray is back home, doing the obligatory factory tours. She was at Machinists Inc. on Seattle's industrial south side Wednesday.

Murray examined a fuel tank for a torpedo being made for a Navy contract. Her guide, Jeff Tomson, said that government orders make up about 30 percent of the company's business ‑‑ and that he knows projects like this one could easily end up on the supercommittee's chopping block.

"I would prefer that they didn't do that now," Tomson said. "We would have done well for the customer on this project, and we'd like to continue to."

But if the supercommittee can't reach agreement, there will be automatic cuts, split evenly among defense and nondefense spending.

"The easy thing to do," Murray said, "would be, 'Why don't you just cut everything?' But that is not the wise thing to do. We have to be very careful because if we just simply put more people out of work, whether they're in construction or transportation, and we make it harder for us to get out of this economic recovery, then we'll not have been wise."

This deficit-cutting job is something of a role-reversal for Murray. Last year, in the middle of the Tea Party insurgency, she won a fourth term by playing up the billions in federal dollars she's brought home.

In 2005, she even helped Alaska Sen. Ted Stevens get funding for the notorious "Bridge to Nowhere." Later, when he left the Senate, he gave her his desk.

"You don't need to be chairman of the Republican National Committee or any political operative to figure out that Sen. Murray is going to use this position to raise money for Senate Democrats," Priebus says.

Murray says she won't step down from her fundraising job, but she says the supercommittee will be her top priority.

Meanwhile, some Democrats worry that the diminutive, mild-mannered former teacher won't be tough enough for these high-stakes negotiations.

When she first ran for the U.S. Senate, she used her modest appearance as a political asset, calling herself the "Mom in Tennis Shoes." Now she's the fourth most powerful Democrat in the Senate.

"Really, few people thought when she went to Washington that she would eventually become the powerhouse that she is today," Ammons says.

Outside the factory in Seattle, Murray said she has already been in touch with all of the members of the supercommittee.

"I'm impressed that everybody understands the really important consequences of this, the importance that we — although many have drawn lines in the past — to come to the table with open mind. And I'm hoping that the pundits and the screaming folks that are out there will give us the room to come to a thoughtful agreement," Murray said.

But with the Democratic base so disenchanted with President Obama's failed attempts to find a middle ground with Republicans, it remains to be seen whether they'll find Murray's low-key approach any more satisfying.