Accessibility links
Obama's Jobs Woes: Government To The Rescue? As President Obama leaves on a 10-day summer vacation, speculation intensifies on what he'll propose in an early September speech to stimulate job creation. 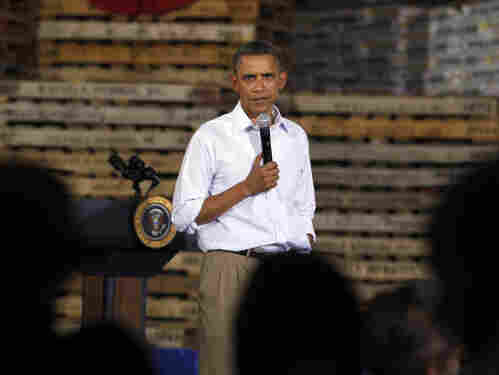 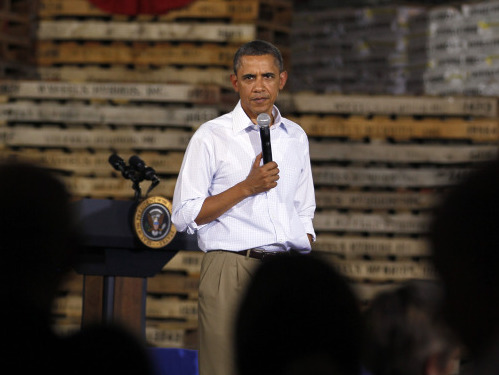 President Obama speaks Wednesday at a town hall-style meeting at Wyffels Hybrids Inc. in Atkinson, Ill. He is expected to unveil plans to stimulate the economy after Labor Day.

As President Obama embarks on vacation, he leaves behind roiling domestic markets, dismal unemployment numbers and speculation about what he'll propose in a planned jobs-and-economy speech after Labor Day.

While he's expected to lay out some familiar strategies when he returns, from extending payroll tax cuts to new infrastructure spending, economists are looking for more — and for how Obama will balance election-year politics with the imperative to get something done and quickly in bitterly divided Washington.

"He's got a big jobs problem," says Kevin Hassett, economic policy studies director at the business-focused American Enterprise Institute. "Partly through the failure of his policies and partly through timing," Hassett says, "he's got the worst job-creation record since Herbert Hoover."

A Gallup survey this week showed that Obama's approval rating on the economy has sunk to 26 percent. His previous low was 35 percent in November 2010.

The nation's unemployment rate has been at or above 9 percent for four months.

Though she may differ from Hassett on the cause and remedy, senior economist Eileen Appelbaum at the progressive Center for Economic and Policy Research agrees that the president's jobs efforts have fallen short.

Obama "got a stimulus in 2009 that stopped the free-fall, but it wasn't enough," she says. "The president told us we'd be back at work and, look, we're not."

Obama On Jobs And The Economy

Here are some comments from President Obama at a town hall this week in Atkinson, Ill., during his campaign-like swing through the upper Midwest:

—"There is no reason why we should not extend a payroll tax cut that put $1,000 into the pockets of every single family out there."

—"When Congress gets back in September, my basic argument to them is this: We should not have to choose between getting our fiscal house in order, and jobs and growth. We got to do both."

—"There's no reason why we shouldn't put Americans back to work all across the country rebuilding America. Interest rates are low, so we could finance right now the rebuilding of infrastructure all across America."

—"If everybody took an attitude of shared sacrifice, that we're not going to put the burden on any single person, we can solve our deficit and debt problem next week."

Appelbaum says: "I would like to see a clear statement from him about what he believes the American people need, and what he thinks he can get."

But the pre-speech debate remains mired in what the government's role should be in getting people back to work in the short term, even if it contributes to the nation's budget deficit.

The president is expected to argue the need for more government spending now, and has also said he'll push the new congressional "supercommittee" to come up with a longer-term plan to reduce the nation's deficit by more than its current goal of $1.5 trillion over 10 years.

If Not Government, Who?

Appelbaum is among a cadre of economists who argue that this precarious economic time requires that government spend, not retreat.

"I would like to propose to the president that he first stop saying the government is like your family, that you have to live within your means," she says.

Appelbaum says she and her family borrowed to finance their mortgage, to put themselves and their three children through college, and often when they were the poorest.

"Families also don't have the Federal Reserve in their backyards; they can't print money," she says.

Her spending argument goes like this: Of the four available economic engines — consumers, businesses, exports and the government — only the government has the ability and, perhaps, the will to invest in jobs right now.

Consumers have retreated, businesses won't hire until they have consumers to sell to, and most of the rest of the world's economies are similarly suffering, she says.

"If the federal government also pulls back, how do we get out of the situation we're in?" she says. "It should be investing in education, infrastructure, research and direct job creation."

With interest rates already near zero, there is little the government can still do in the way of monetary policy that would have much effect.

"We're in this liquidity trap," she says. "No one wants to invest."

That leaves fiscal policy, she says, as the lever with the potential to reduce unemployment.

"The things we need now should be financed through deficit," Shierholz says. "But the narrative in [Washington] has gone in the absolute opposite direction."

No Keynes, But Common Ground

At the American Enterprise Institute, Hassett is among economists who view the reliance on government spending to create jobs as failed Keynesian policy.

"If we pursue temporary policies like jacking up government spending, you give yourself a hangover," he says. "We need to think about big, permanent policy changes."

Programs like Social Security and Medicare need to be fixed, Hassett argues, and corporate tax cuts should be in Obama's mix of economic remedies, along with an overhaul of the federal unemployment insurance program.

It's on the issue of unemployment insurance that economists like Hassett, Shierholz and Appelbaum have found common ground.

They endorse a practice in Germany that allows companies to reduce worker hours in lieu of layoffs. The workers could then receive unemployment insurance for the hours they are no longer working.

Say a company, instead of laying off workers, reduced overall worker hours by 25 percent. Under the so-called job-sharing program, the workers would be eligible for one day a week of unemployment benefits.

Hassett has been pushing for such a program here along with Appelbaum's colleague, Dean Baker.

"Dean and I don't usually agree, but there are fundamental problems with people who are completely out of the workforce for a while," Hassett says. "Cyclical unemployment becomes structural."

"It's a really good idea, and I think people on the left and right can agree," he says.