Accessibility links
In Japan, Restoring Photos For Tsunami Victims Many Japanese families on the country's northeast coast lost everything in the March tsunami — homes, businesses and loved ones. But in the rubble, survivors found many priceless family photos. One U.S. group is now working to repair the photos damaged in the disaster.

Moto Suzuki's house in the Japanese town of Ofunato was flooded by the tsunami. Photo re-touchers overseas restored this photo of Suzuki when he was a little boy.

Each week, tsunami survivors gather at temporary housing centers in the city of Yamada along Japan's northeast coast. They sing songs to cheer themselves up and comb through salvaged photos.

One morning, Miyoko Fukushi finds an old picture from the opening day of her daughter's elementary school. It's a formal shot of the students' mothers, wearing kimonos with their hands in their laps. Fukushi, 77, points to a younger version of herself.

"I was chubbier when I was young," she says with a laugh.

Then she points to other women in the picture, who lost their lives in the deluge.

"Kayo Suzuki. She was washed away as she ran from the tsunami," Fukushi recalls. "This is Kayoko Kon. I heard she went back home to get her belongings."

Last March's tsunami devastated the coast here. If people didn't lose their lives, they lost practically everything else — except, it turns out, many of their photos. Survivors found countless pictures strewn amid the mud and wreckage, many badly damaged by water.

Over the past several months, All Hands Volunteers, a Massachusetts-based, nonprofit, has done everything from repairing homes to cleaning drainage ditches along the coast. The organization has also hand-cleaned more than 55,000 photos. In some cases, professionals from around the globe have even restored images digitally. 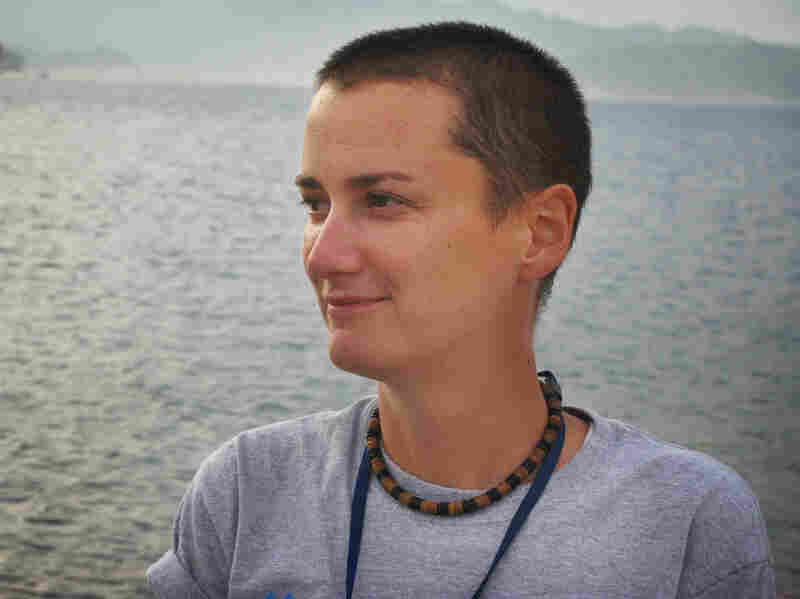 Fukushi's photograph needs work. Specks of dirt are embedded in the surface, and saltwater has washed away some of the figures.

"It's a shame that damage has gone up so far on this lady, but most of her face is there," says Becci Manson, a volunteer with All Hands, as she examines figures in the picture.

Ordinarily, Manson works in New York retouching images for magazines like GQ and catalogs for Barneys. When she saw all of the damaged photos here, she saw another way to help.

Manson has traveled more than an hour up the coast today to pick up and return photos. She takes Fukushi's picture, scans it onto her laptop and uploads the image to a server. Then, she turns to scores of volunteers — from Sydney to Spain — to see who's available to restore it.

Some photo retouching jobs are easy and take minutes while others, like this intricate kimono, can take a retoucher days. The face in this picture was blurred for privacy reasons.

"I'll send an email out to all the retouchers and say, ' I've got loads more images for you,' " says Manson, who travels from town to town with a portable scanner. "Those who write back and say they want a new one, I'll start sending the images."

Scores of photo retouchers have pitched in to help. In all, they have fixed more than 220 photos for nearly 60 families, Manson says.

One of the volunteers is Bob Whitmore. Whitmore used to work with Manson in New York and learned about the photo rescue project on Facebook. He has already restored two pictures and is working on a third from his home in Metuchen, N.J.

Sometimes, Whitmore has to restore people's bodies, or backdrops have been blotted out by water. He uses Photoshop to restore a piece of clothing or reconstruct a room.

"Using the laws of perspective, if you've got a wall coming up and a ceiling coming over, you can kind of figure out where they should meet," he says in a Skype interview.

Professionally, Whitmore spends most of his time making a glamorous world look even more so in fashion magazines, but he has always loved restoring people's old pictures.

"It's the most satisfying work I think I've ever done," says Whitmore. "Taking old photos and breathing some life into them. Putting the color back in that was faded, or fixing spots that have been damaged. People just light up when they see something come back that they thought was gone."

This is the first photo All Hands Volunteers restored.

Cho Kikuchi certainly did. She lost all of the photos in her house to the tsunami, but a few survived in a Buddhist temple, including one of her late father and another of her late husband.

They were worn and scratched by the elements. Manson retouched the photos herself, good as new.

"I didn't expect this would [be] so beautiful," says Kikuchi, 75, admiring the restored photos while sitting in a temporary home the government has provided. Every time she sees Manson — who is about half her age — Kikuchi invites her in for tea and snacks.

Kikuchi has placed the restored prints in a small, wooden shrine in her tiny home where she honors her loved ones.

"In the morning, I give them water and tea with ice," she says. "Then, I pray for them to please watch over me." 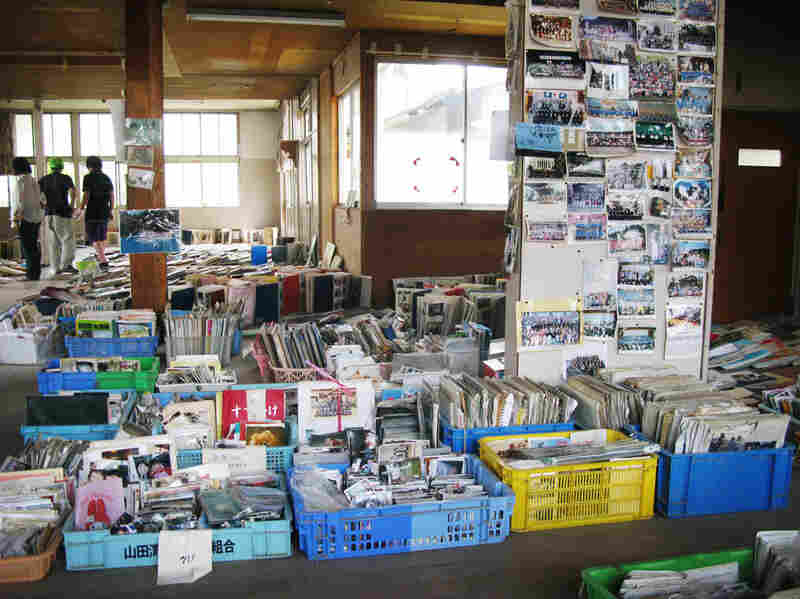 The tsunami washed away countless homes, but thousands of photos were recovered amid the mud and wreckage in Yamada. These photos are waiting for their owners to reclaim them. Frank Langfitt/NPR hide caption 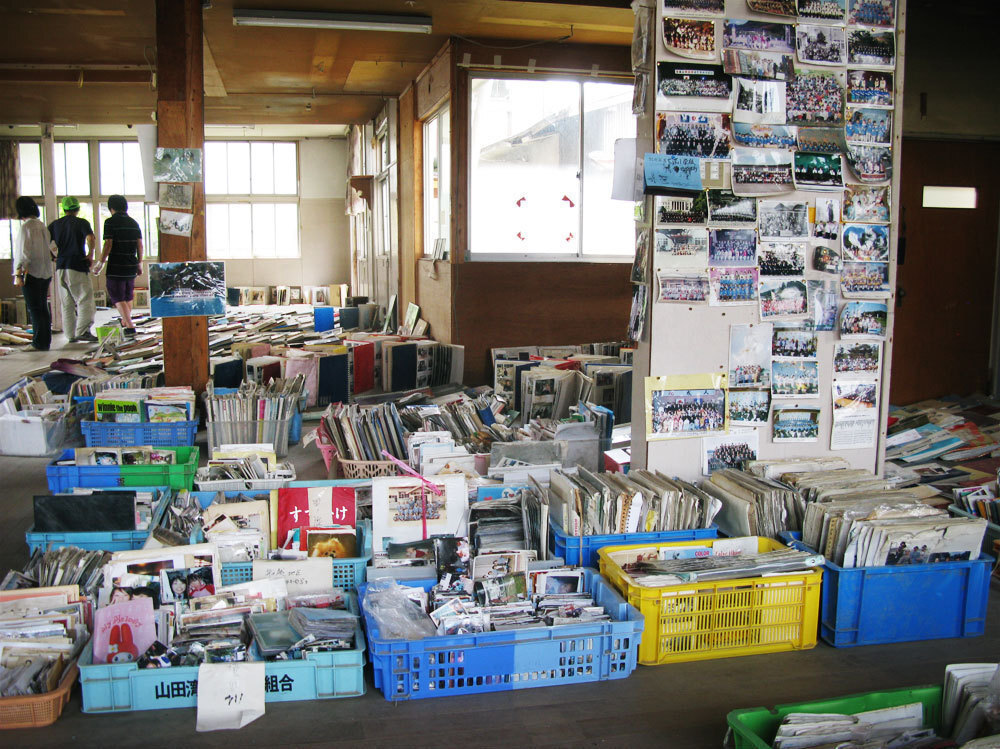 The tsunami washed away countless homes, but thousands of photos were recovered amid the mud and wreckage in Yamada. These photos are waiting for their owners to reclaim them.

Manson says responses like this make the work worthwhile.

She says it's also gratifying for another reason: Photo retouchers are often criticized for distorting reality in fashion magazines.

"There's always someone who's got something to say about how thin someone is made or how flawless someone's skin is and the effect it has on young women," says Manson. "So when I set up the project, it was nice to think we could actually do something to help someone."

There's more to do. In Yamada alone, thousands of recovered photos are waiting to be reclaimed by their owners.