Accessibility links
Black Researchers Getting Fewer Grants From NIH A new study finds that when applying for scientific research grants from the National Institutes of Health, white researchers succeeded 25 percent of the time, while blacks about 15 percent of the time. Though race is not part of the application, some suggest the finding could mean there is an underlying bias in decisions. 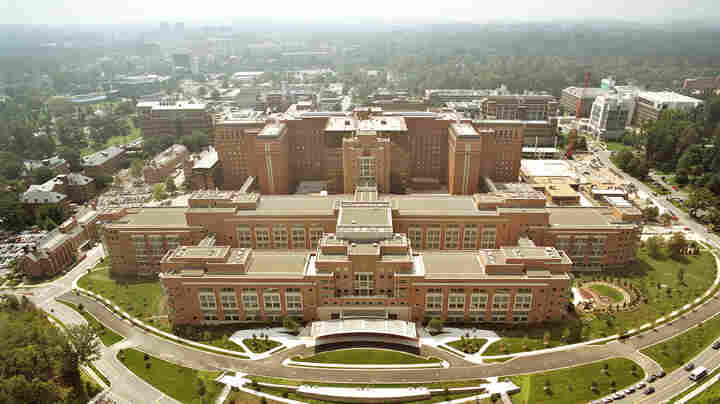 A new study finds that when applying for scientific research grants from the National Institutes of Health, white researchers succeeded 25 percent of the time, while blacks about 15 percent of the time. Above, the Mark O. Hatfield Clinical Research Center at the NIH Campus in Bethesda, Md. NIH hide caption

If you glance around university corridors or scientific meetings, it's obvious that African-Americans are uncommon in the world of science. A study in Science magazine now finds that the black scientists who do start careers in medical research are at a big disadvantage when it comes to funding.

People have been trying to do something about racial disparities in the world of science for several decades. William Lawson, chairman of the psychiatry department at Howard University in Washington, D.C., has thought a lot about how to increase the number of black research psychiatrists. He says for one thing, they're more likely to study issues important to that group.

"First of all, just becoming a scientist is, for many of them, a challenging part of their lives as well, because all along the line, there are many barriers towards reaching that level," he says.

He says African-Americans who do get jobs in academia tend to focus on teaching and clinical practice, which they see as serving their communities, instead of research. And blacks often come into science without all the personal connections that others may have.

If indeed we are biased in the way that we review some of our applications, that means that the American people's money may not be going to the strongest scientific ideas.

"The research enterprise, like in a business or anything else, it helps to know the folks who have been successful and involved," Lawson says.

Once black scientists get academic jobs, their challenges don't end. That's where the latest study comes in.

Raynard Kington, president of Grinnell College, wondered whether black scientists got as much grant support from the National Institutes of Health as do other scientists. He's a former deputy director of the NIH. Kington and his colleagues took into account factors like the nature of the institutions where black scientists work, their training and their history of landing research grants.

"We can't rule it out, but that's not what we think is happening," Kington says. "I think the more compelling case is that it is unconscious in various ways."

The review teams who decide who should get scarce research dollars may be picking up subtle clues from the applications, Kington suggests.

"Although race is not identified in applications, it remains fairly easy, I would argue, to infer race for many applicants," he says.

And there's lots of research that shows people in the general public have subtle biases against people with, for example, black-sounding names.

"Scientists are human; scientists have the biases of society in many ways, in spite of their scientific training," he says.

So he says it's worth investigating whether that's playing a role in the committees that hand out grants. Kington says it's a much broader issue than one of racial discrimination. It could mean that grants aren't being awarded on pure merit.

"If indeed we are biased in the way that we review some of our applications, that means that the American people's money may not be going to the strongest scientific ideas," he says.

The new research was funded by the National Institutes of Health, which has been trying to address these discrepancies. Francis Collins, the NIH director, was not happy to hear the results.

"That's a huge discrepancy, and something that we are deeply troubled about and are determined to do something about," Collins says.

One idea is to recruit more up-and-coming black scientists to serve on the committees that actually evaluate the grant applications.

"It's clear that that experience, where you get a chance to see other applications and how they fare in the peer-review process, is very helpful when one sits down to write one's own grant," he says.

"Every institution I've been at, I would regularly get requests from minority students to mentor them. And almost always at a rate substantially higher than my peers. Some people refer to that as the black tax," Kington says.

So the issues here appear to be deep, without easy answers.