Accessibility links
For Supporters, Ron Paul's Message Hits Chord During the last presidential race, the Texas congressman had some of the most fervent supporters in the Republican field, but that didn't translate to electoral success. This year, Paul supporters are disappointed in the lack of coverage after he finished second in the Iowa straw poll. 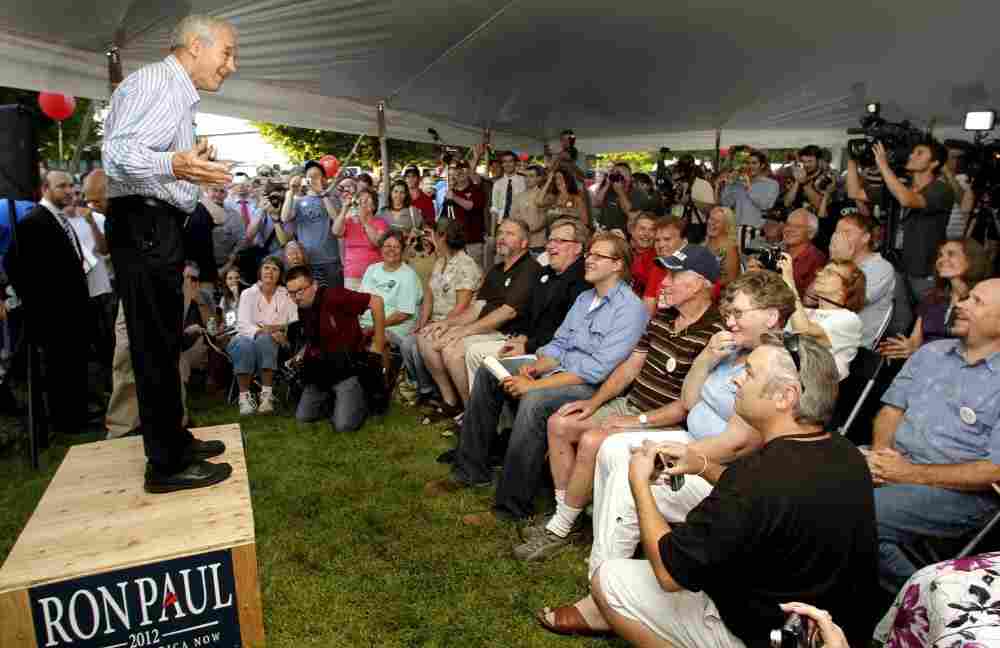 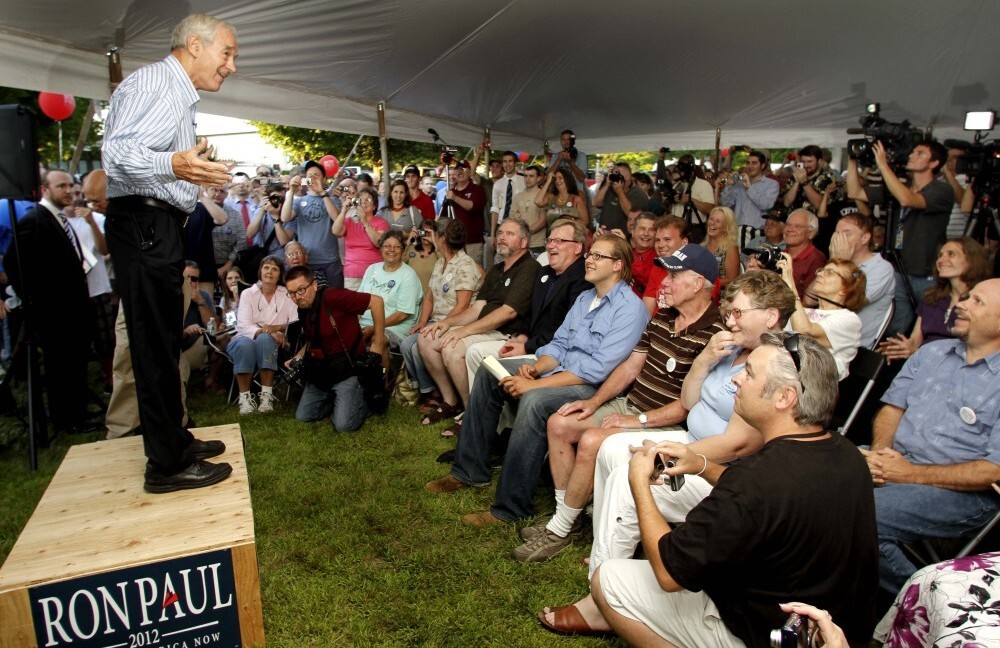 On a balmy August evening in Concord, N.H., the smells of summer float through the air: cooking meat, freshly cut grass and bug spray. A few hundred Ron Paul supporters have gathered under a white tent to hear their candidate speak at the opening of his state campaign headquarters.

They're excited about the Texas congressman's close second-place finish at the Republican presidential straw poll in Ames, Iowa. They're also a little frustrated that it hasn't been getting more attention.

Coffey's passionate intensity is typical of the folks at this rally. These are not inquisitive voters trying to learn more about an unfamiliar candidate — these are true believers.

A Heavily Devoted Base

During the last presidential race, Paul had some of the most fervent supporters in the Republican field, but that didn't translate to electoral success. He failed to win a single primary or caucus. This year, the devotees are back.

"I actually cried listening to his last speech," says Leslie Lannin. She sits with her family in the shade of a Winnebago they call "The Happy Camper." She painted big slogans on the side: "Ron Paul Revolution," "Love Peace Liberty 2012," and "Dr. Paul Cured My Apathy."

Their vehicle looks more suited for a Grateful Dead concert than a Republican presidential campaign rally. Her husband, Terry, is an art teacher who describes himself as a "crunchy, granola" guy.

The family bought 100 Ron Paul DVDs and handed them out to strangers at gas stations on the drive up from Massachusetts.

In short, Paul is not a typical Republican candidate, and his supporters are not typical Republican voters. He wants to shrink the military, end the Federal Reserve, overturn the Patriot Act and legalize marijuana. He has been making these arguments for decades.

Robin and Tom Jacubic are a husband and wife who had sat on opposite ends of the political spectrum for years.

"I was for Ned Lamont because he was anti-war," says Robin, "and when the Democrats took over in 2006, nobody did anything to stop the war, so I found Dr. Paul from there."

After a decade of married life supporting opposing political candidates, "We found each other in libertarianism," says Robin.

He's really pushing his message out there, and I think Ron Paul has been very successful in that he's made sure that more libertarian ideas are talked about. And he's actually forced a number of the other candidates to agree with his position.

Andy Smith, a political scientist at the University of New Hampshire

On the stump, as Paul acknowledges, he comes across more grandfatherly than presidential.

"At times I've been criticized for my lack of ability to give public speeches and other things," he tells the crowd in an aw-shucks tone. "But I'll tell you what: Where I get my energy is from people like you, who are energized."

Paul stands on a small wooden platform in an open-collared striped shirt, black slacks and comfortable shoes. It's very different from the look of, say, Texas Gov. Rick Perry, who showed up at a New Hampshire coffee shop this week in a monogrammed shirt, silver cuff links and a tie.

Perry recently suggested that Federal Reserve Chairman Ben Bernanke may have committed treason. Paul says he's been talking about the Fed for decades.

"I tell you what, [Perry] makes me look like a moderate," Paul says. "I have never once said Bernanke has committed treason. But I have suggested very strongly that the Federal Reserve system and all their members have been counterfeiters for a long time."

Andy Smith, a political scientist at the University of New Hampshire, says Paul fills a distinct niche in the Republican primary.

"He's a pure libertarian candidate, and I think he recognizes that if he stays true to that, he's not really going to be able to expand his base beyond that," Smith says. He describes Paul as a "message candidate."

"He's really pushing his message out there, and I think Ron Paul has been very successful in that he's made sure that more libertarian ideas are talked about," Smith says. "And he's actually forced a number of the other candidates to agree with his position."

By that definition, success doesn't require winning at all.