Accessibility links
Activist: It's Time For Syrian Opposition To Unify In Syria, the opposition has focused on driving President Bashar Assad from power. It's not clear who would replace him, but one leading activist in neighboring Lebanon says it's now time for the opposition to come together. 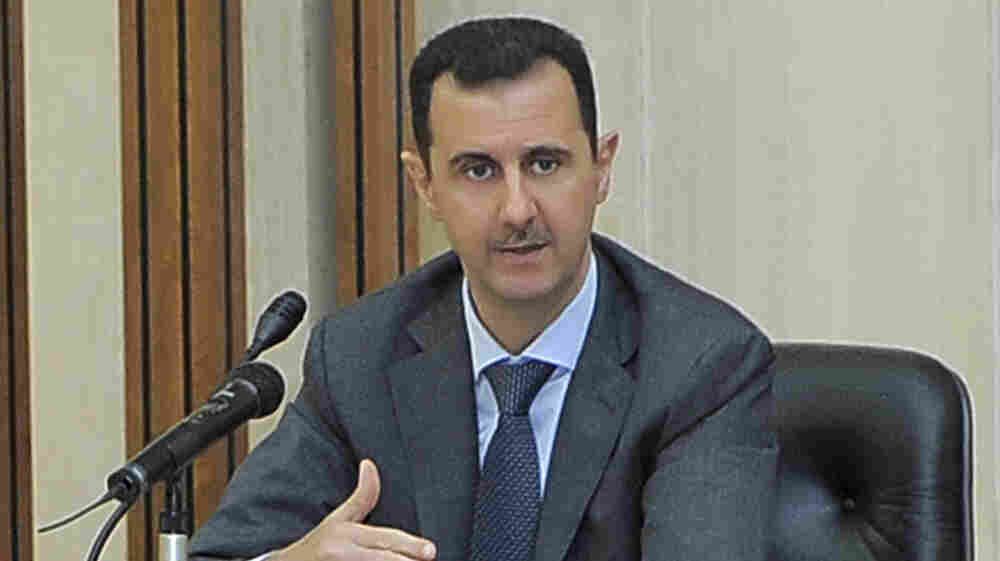 Syrian President Bashar Assad addresses a meeting of his Baath Party in Damascus, Syria, on Wednesday. President Obama called on Assad to step down, though it's not clear who would replace Assad if he quit or was ousted. SANA/AP hide caption

President Obama has now called on Syrian President Bashar Assad to quit. But if he did, or if he is toppled, who would replace Assad?

There's no clear answer. Assad and his late father, Hafez Assad, have ruled Syria for four decades and have not tolerated anything that resembles a genuine opposition inside the country's borders.

"There is no opposition in Syria. There are opposition groups," said Lebanon's Wissam Tarif, who has been a prominent campaigner for democracy and human rights in the Middle East.

The problem, Tarif says, is that the emerging opposition groups are deeply divided, with no real plan of how the country would be run in a post-Assad era.

Tarif is currently in Beirut and has been documenting the deaths, injuries and detentions in Syria during Assad's harsh crackdown on protesters over the past five months.

Tarif has been in touch with those leading the protests, and he used to work with anti-government groups inside Syria. Those groups made no real progress until the Arab Spring turned much of the region upside-down. And they still lack unity and direction.

By some counts, there are at least seven Syrian exile groups, each with its own leaders and its own ideas about how the country should go forward.

Then there's the internal opposition, which has been criticized by some activists for being too close to the Assad regime.

And finally there are the young protesters who have taken to the streets. But Tarif says even they are divided and ill-equipped to provide real leadership.

"There's millions of people taking to the streets, willing to die for freedom. And it's a hell of a very difficult job. But it's not enough," he says, adding that the demonstrators "do not know how to do politics."

Tarif says all of these groups need to work together on a transitional council. It would be something of a shadow government, similar to what the rebels have created in Libya. However, that Libyan council has been filled with friction recently.

Still, Tarif says the important thing is to create a council and start working on how to get rid of Assad, maintain stability and run a new country.

Up to now, anti-government groups in Syria have preferred to remain decentralized. This made it more difficult for the Syrian security forces to track them down.

The Obama administration criticized the Assad regime for months, and on Thursday called for him to step down. Assad has given no indication that he'll comply. But Tarif says it's time for the opposition to step up, stop arguing and unify.