Accessibility links
Unraveling The Mysteries Of Arctic Warming The Arctic is heating up twice as fast as the rest of the Earth, and sea ice is rapidly disappearing during the summer months. Some studies now suggest the Arctic Ocean could be free of ice in the summertime by the year 2030, with major repercussions in the region and beyond.

An iceberg is seen melting off the coast of Ammasalik, Greenland, in July 2007. This year, scientists say sea-ice extent in the Arctic has reached its lowest level since monitoring by satellite began in 1979, the result of rising temperatures. John McConnico/AP hide caption

An iceberg is seen melting off the coast of Ammasalik, Greenland, in July 2007. This year, scientists say sea-ice extent in the Arctic has reached its lowest level since monitoring by satellite began in 1979, the result of rising temperatures.

The Arctic may be the world's next geopolitical battleground. The melting ice will have profound consequences for the roof of the world, opening strategic waterways to shipping, reducing the ice cap on Greenland, and spurring a rush to claim rights to the wealth of natural resources that lie beneath. NPR examines what's at stake, who stands to win and lose, and how this could alter the global dynamic.

The final installment in a six-part series

The Arctic is heating up faster than anyplace on Earth. And as it heats, the ice is growing thinner and melting faster. Scientists say that sometime this century, the Arctic Ocean could be free of ice during the summers. And that transition is likely to be chaotic.

Arctic sea ice has always seen dramatic swings. Every winter, the ocean is completely covered with ice. It starts to melt in the late spring, and by September about half that ice has melted away.

Race To The Arctic

Now, add to that annual gyration a more recent trend. The seasonal melt has been claiming more and more ice since at least 1979, when researchers started monitoring that trend from space.

"Within the satellite record, this [year] is the lowest ice extent for July that we've ever seen," says Mark Serreze, who heads the National Snow and Ice Data Center at the University of Colorado.

"The Arctic keeps surprising us," Serreze says. "The point is we're losing the sea ice faster than we think we ought to be. And this is causing us to revise some of our estimates."

Challenges To Predicting An Ice-Free Arctic

Just a few years ago, scientists forecast that global warming would clear summer ice from the Arctic Ocean by the year 2100. Now, many forecasts say that could happen in the middle of this century. And Serreze says a few peg that ice-free spell as early as 2030.

"We very likely will live to see ice-free summers in the Arctic," says Marika Holland, of the National Center for Atmospheric Research in Boulder, Colo. "Or if we don't live to see it, our children will."

Holland says nobody can pinpoint a date because Arctic sea ice is hard to predict year to year. That unpredictability has implications for people who are thinking about exploiting Arctic resources and expanding Arctic sea routes. 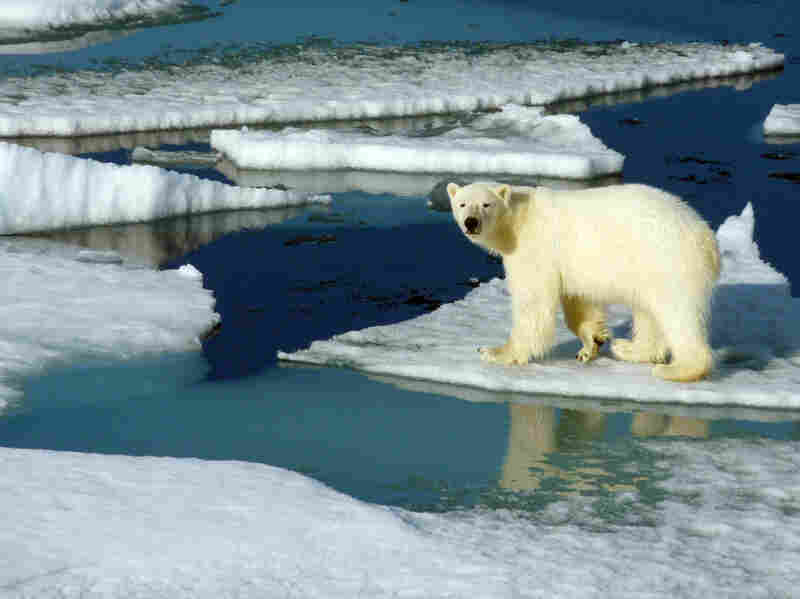 A polar bear makes its way across the ice in Canada's Northwest Passage. Melting ice in the Arctic will make survival increasingly difficult for wildlife in the region. Jackie Northam/NPR hide caption 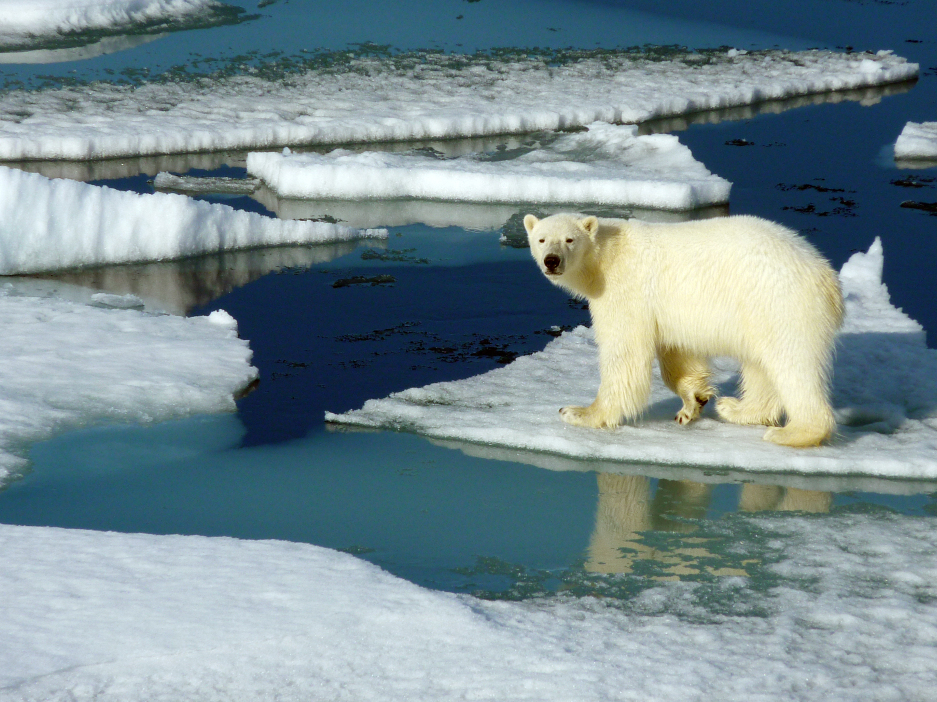 A polar bear makes its way across the ice in Canada's Northwest Passage. Melting ice in the Arctic will make survival increasingly difficult for wildlife in the region.

"Some of these shipping routes will become open much more reliably," she says. "But we're not close to that yet and we can't really predict exactly when that's going to happen."

The sea ice is at the mercy of currents, cloud patterns and a host of other variables that change naturally from year to year.

The consequences of melting ice are going to be felt first in the Arctic region. For example, polar bears and walruses rely on sea ice as hunting platforms and places to rest. As those ice edges move out into deeper water, farther from the shore, it will become harder for those animals to survive.

Leonid Polyak, from the Byrd Polar Research Center at Ohio State University in Columbus, says wildlife had to face a temporary warm spell in the Arctic about 8,000 years ago. Then, it was actually hotter than it is today, the result of a temporary change in the Earth's orientation relative to the sun. But this time is different.

"Significant changes in the ice cover will affect the ecological system very profoundly," Polyak says. "And it's not given that many of those species will survive if Arctic ice disappears completely in summer."

Warming In The Arctic

And the changes aren't just going to affect wildlife. The ice serves as a giant reflector for energy. Some 80 percent of the sun's energy bounces back into space when it hits the ice. But when the ice melts and exposes the ocean, that darker surface absorbs 90 percent of the incoming energy. As a result, the loss of ice leads to more warming.

That will drive up the temperature on nearby land masses. In the coming decades, the frozen ground that makes it relatively easy to get around in the Arctic will start turning to mush. And the effects of Arctic warming will gradually reach farther south.

"What happens in the Arctic affects heat waves in Chicago — or elsewhere," Holland says.

And then there's global sea-level rise — an effect that isn't as obvious as it might seem. Because when sea ice melts, it does not raise sea level. After all, lemonade doesn't overflow when the ice that's floating in it melts.

But what happens to the ice that's sitting out of the water, on the Greenland bedrock, is another story altogether.

"If we see this enhanced warming, due to sea-ice loss, we'll very likely start to melt more of the Greenland ice sheet," Holland says. "That water does lead to sea-level rise."

And those global impacts are going to be much more noticeable than the changes in the remote north, which will gradually reshape the Arctic.