Accessibility links
Gadhafi More Isolated As Rebels Push Toward Tripoli The rebels gained control of the strategic city of Zawiya. It's a major victory in the rebels' march on Moammar Gadhafi's stronghold of Tripoli, just 30 miles to the east. The territory remaining under the Libyan ruler's control has been shrinking dramatically in the past three weeks. 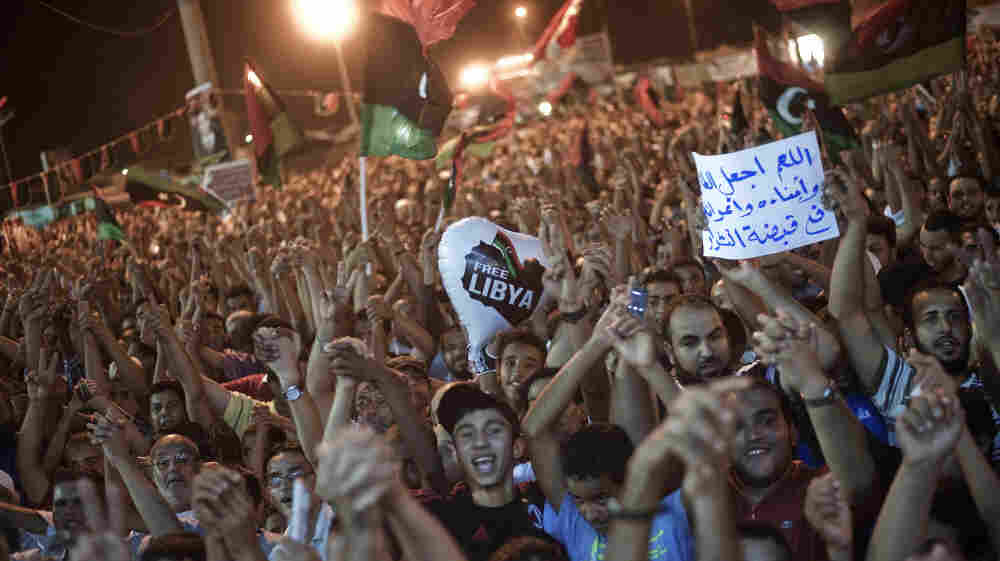 Tens of thousands of Libyans celebrate what the rebels claim to be the first uprising in Tripoli against Moammar Gadhafi's regime on Sunday at freedom square in Benghazi, Libya. Gianluigi Guercia/AFP/Getty Images hide caption 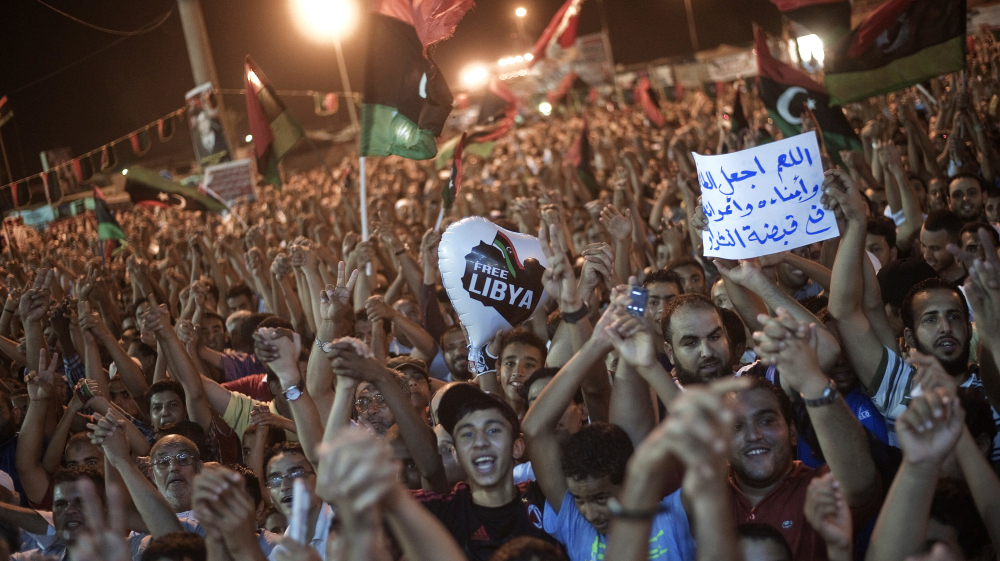 Tens of thousands of Libyans celebrate what the rebels claim to be the first uprising in Tripoli against Moammar Gadhafi's regime on Sunday at freedom square in Benghazi, Libya.

After taking Martyr's Square in Zawiya, rebels pushed Moammar Gadhafi's forces about five miles out of town. It's a major victory in the rebels' march on Gadhafi's stronghold of Tripoli, just 30 miles to the east.

Most of the civilians have fled the city and the scars of the battle are everywhere, NPR's Lourdes Garcia-Navarro told Weekend All Things Considered guest host Laura Sullivan.

Rebels Close In On Libyan Capital

"In Martyr's Square there are still dead bodies lying on the street, [whom] rebels say are Gadhafi loyalists who have not yet been buried," she said. "Buildings all around are scorched black with marks from rocket-propelled grenades and tank fire being shot into them."

Those who remained in the city were coming into the square and celebrating, saying the city had been liberated, she said.

Garcia-Navarro said this is an enormous victory for the rebels, the coastal city of Zawiya being the first major city they have managed to take.

"They are now on the doorstep of Tripoli," she said. "They say they will not be able to claim victory over Gadhafi until they take Tripoli, and this is a major victory on that road."

Still, regime troops kept firing rockets and mortars at Zawiya from positions in the east even after rebels said they drove them out, and thunderous booms echoed across the city. The central hospital was hit by mortar rounds early Saturday, several hours after it was taken by rebels. The attack badly damaged the operating rooms, punching a hole into one of the outer walls. Metal slats from the ceiling were strewn across the floor, and soot covered the operating tables.

Rumors have been circulating that Gadhafi and his family have left the country or are about to leave for Venezuela or South Africa. However a couple hours after the rebels said they had attacked Tripoli, state television ran what appeared to be a live audio message by Gadhafi. He did not appear on television but sounded like he was calling the message in on a poor phone line which crackled at times. He announced the time and date twice to prove that he was speaking live. 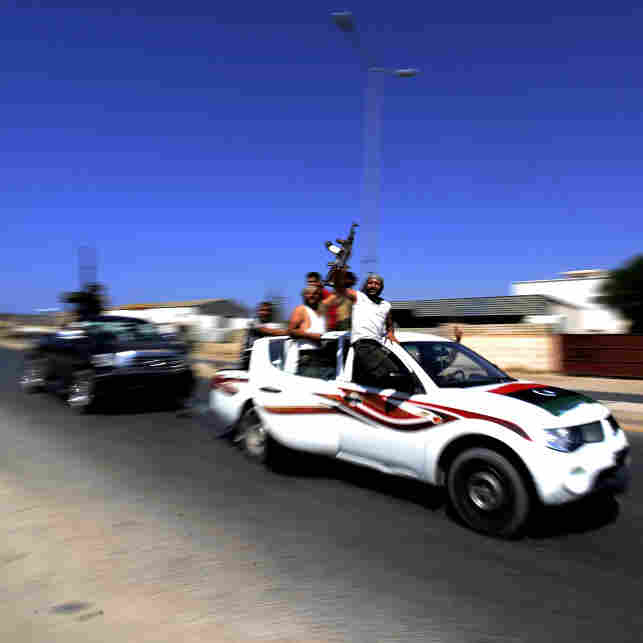 Libyan rebels raise their guns in celebration as they drive through the main road leading to Zawiya. The opposition claimed full control of the strategic city, 30 miles west of Tripoli, on Saturday. Filippo Monteforte/AFP/Getty Images hide caption 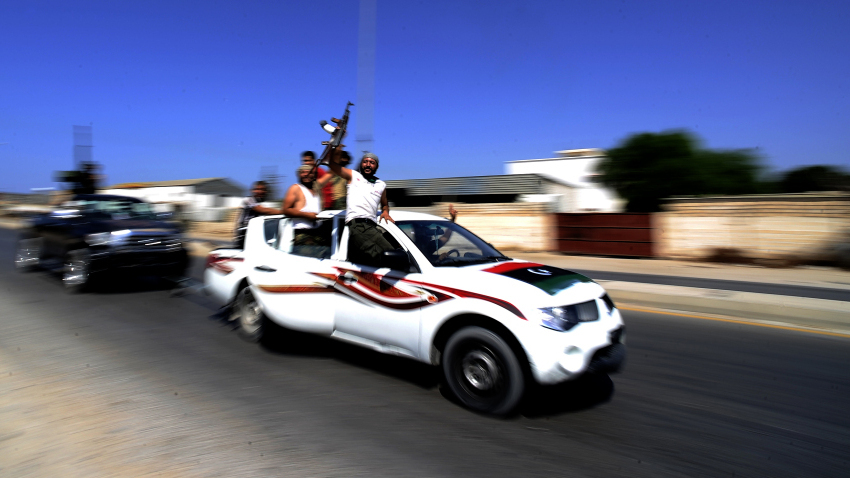 Libyan rebels raise their guns in celebration as they drive through the main road leading to Zawiya. The opposition claimed full control of the strategic city, 30 miles west of Tripoli, on Saturday.

"Libyans wanted to enjoy a peaceful Ramadan," he said. "Instead they have been made into refugees. What are we? Palestinians?"

Garcia-Navarro said it's unclear where he is but that Libyans feel his departure is imminent. She said he went to great lengths in order to show he was actually speaking live by giving the date, time and other details in order to quash rumors he had fled the country.

"We really don't know what his plans are or where he is," she said. "All of the roads that lead to Tripoli from the east, from the north and from the west are in rebel control."

Gadhafi condemned the rebels as traitors and "vermin" who are tearing Libya apart and said they were being chased from city to city a mirror image of reality.

In Tripoli itself, gunfire could be heard in the streets after NATO resumed its attacks with heavy bombing runs after nightfall.

Armed opposition cells within Tripoli told Garcia-Navarro they were waiting for rebels to arrive and had already begun conducting operations inside the city. They say they will be able to take Tripoli, but it will be a bitter fight.

Libyan rebels said they launched an attack on Tripoli in coordination with NATO late Saturday, and Associated Press reporters heard unusually heavy gunfire and explosions in the capital. 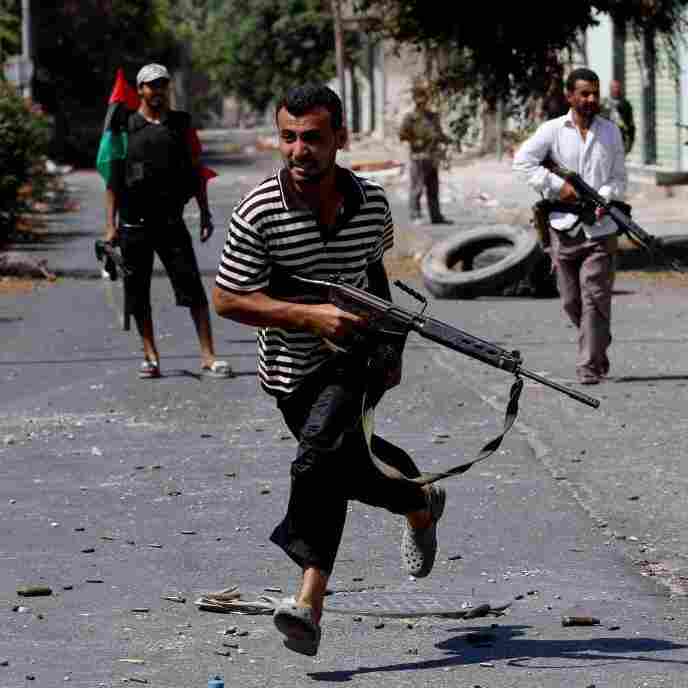 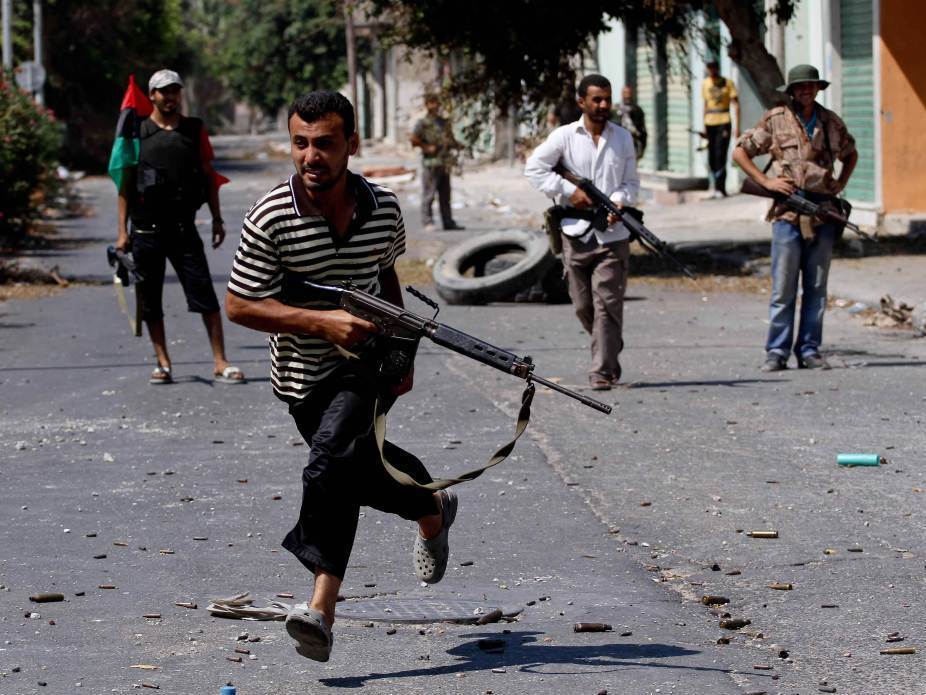 A Libyan rebel dashes over a street to evade sniper fire in Zawiya as rebel forces staged an assault on regime forces in the city's main square Friday.

Gunbattles and mortar rounds were heard clearly at the hotel where foreign correspondents stay in the capital. Explosions also sounded in the same area as NATO aircraft carried out heavy bombing runs after nightfall.

"We planned this operation with NATO, our Arab associates and our rebel fighters in Tripoli with commanders in Benghazi," Mustafa Abdel-Jalil, the head of the rebel leadership council, told the Arab satellite channel Al-Jazeera. Benghazi, hundreds of miles east of Tripoli, is the rebels' de facto capital.

Government spokesman Moussa Ibrahim appeared on Libyan television to deny that there was an uprising in Tripoli.

"Sure, there were some armed militants who escaped into some neighborhoods and there were some scuffles, but we dealt with it within a half hour and it is now calm," he said.

The claims from both sides could not immediately be independently verified.

The momentum in the six-month-old Libyan civil war now appears to have firmly swung in the rebels' favor after months of near deadlock. Zawiya is the biggest prize so far in the rebels' offensive. They also claim to have captured three more towns — Gheryan, south of the capital, Zlitan in the west and Brega in the east.

Residents in the city of Gheryan, which straddles the main road south from Tripoli, held an impromptu parade Friday after the rebels captured the city.

"The town was heavily fortified by Gadhafi, and Gadhafi's forces basically crumbled there in a matter of hours," Garcia-Navarro said. "It's a sign that his troops there are on the defensive. They're extremely weak and they're on the run."

In the east, rebels said they captured all of the strategic eastern port city of Brega, which has repeatedly changed hands in the war. Brega is home to Libya's second-largest hydrocarbon complex and is where the country's main oil fields feed into for refining.

In the west, rebels also claimed to have taken control of Zlitan, 90 miles southeast of Tripoli.

In the United Kingdom, Major General Nick Pope, the Chief of the Defense Staff's Communications Officer, said that RAF planes as part of NATO's mission in Libya had attacked two staging areas used by Gadhafi forces in Zlitan.

He told reporters Saturday that RAF aircraft returned to Tripoli on Friday evening and bombed the main operations room for the Ministry of Interior's security forces, which NATO intelligence had identified as located in a compound in the Abu Salim district.

NATO has played a large role in the rebels' success.

"In fact, there is some debate as to whether claims of victory should go to NATO or indeed to the rebels on the ground," Garcia-Navarro said.

Besides the battlefield gains, the opposition also received a political boost Friday with the defection of Abdel-Salam Jalloud, a close associate of Gadhafi who took part in the 1969 coup that brought the Libyan ruler to power.

Hundreds of miles east of Libya, Assistant Secretary of State Jeffrey Feltman visited the rebels' de-facto capital of Benghazi to announce the opening of the U.S. Embassy in the city.

"Gadhafi's days are numbered," Feltman told reporters on Saturday. "The best case scenario is for Gadhafi to step down now ... that's the best protection for civilians."