Accessibility links
A Battle Is Under Way For The Forests Of Borneo Indonesia has suffered serious deforestation in recent decades. Nowhere is the problem illustrated more starkly than the island of Borneo, where economic development and indigenous cultures are clashing and it's unclear whether conservation efforts are too late. 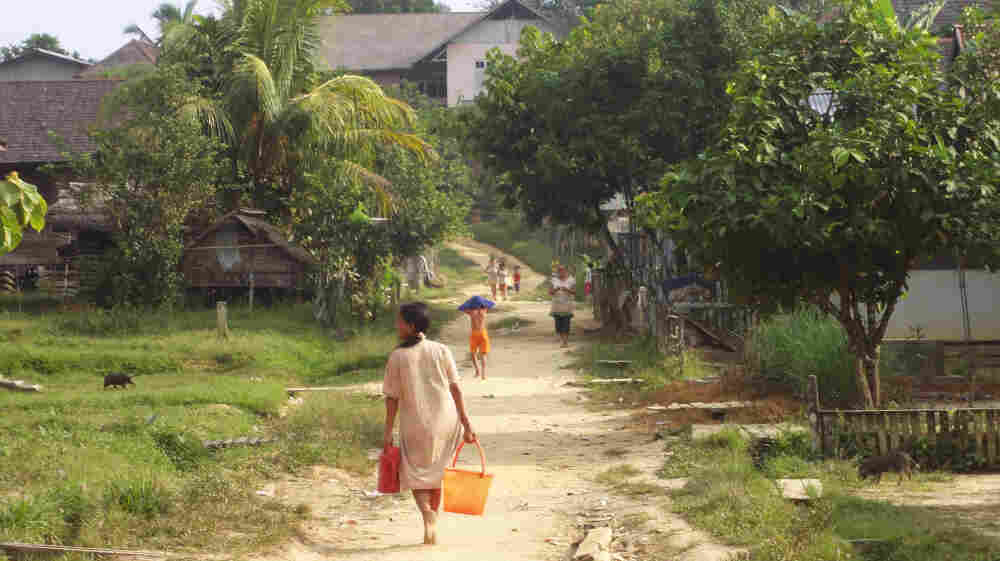 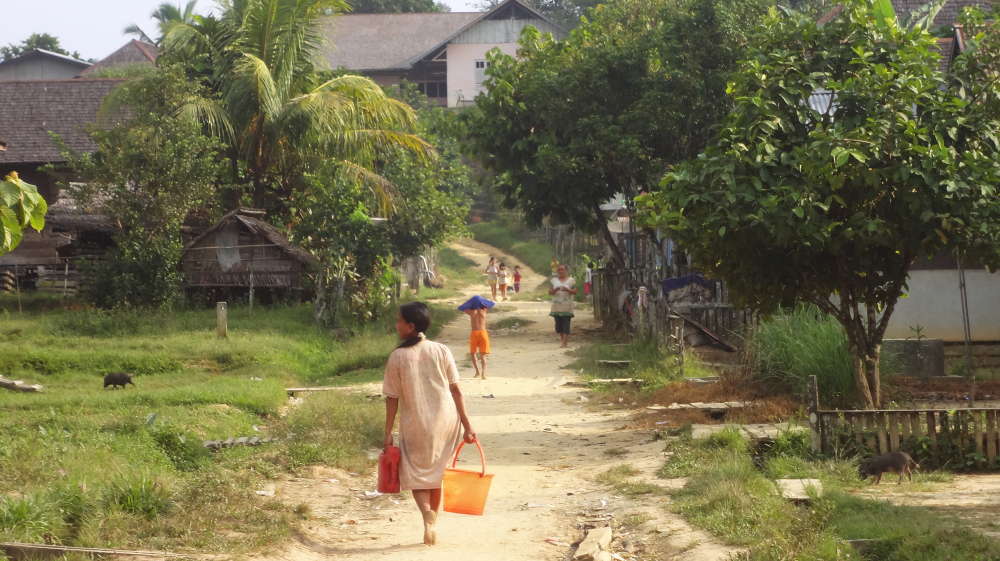 A spry 80-year-old cruises through the thick vegetation of western Borneo, or western Kalimantan, as it's known to Indonesians. Dressed in faded pinstripe slacks and a polo shirt, Layan Lujum carries a large knife in his hand. The chief of the island's Sekendal village is making his morning rounds.

Layan is a member of an indigenous ethnic group called the Dayaks, who once had a reputation as fierce headhunters. As on most mornings, his first job on a recent day is to tend to his rubber trees.

He uses a blade to cut a few grooves in each tree, allowing its white latex sap to trickle into a cup. Then he plucks a handful of fern leaves and snaps off the tops of a dozen or so bamboo shoots and puts them in a bucket. In a few minutes, he has enough for lunch. He goes to the river to wash and chop the shoots. 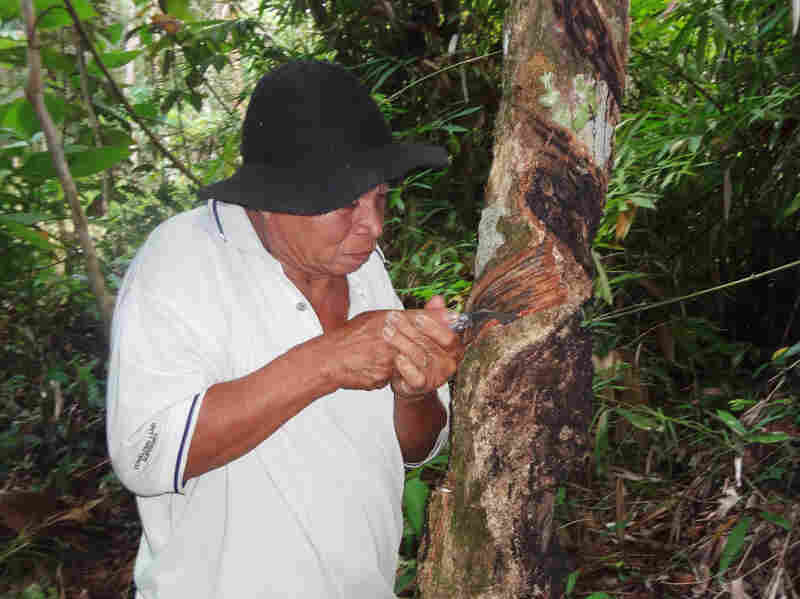 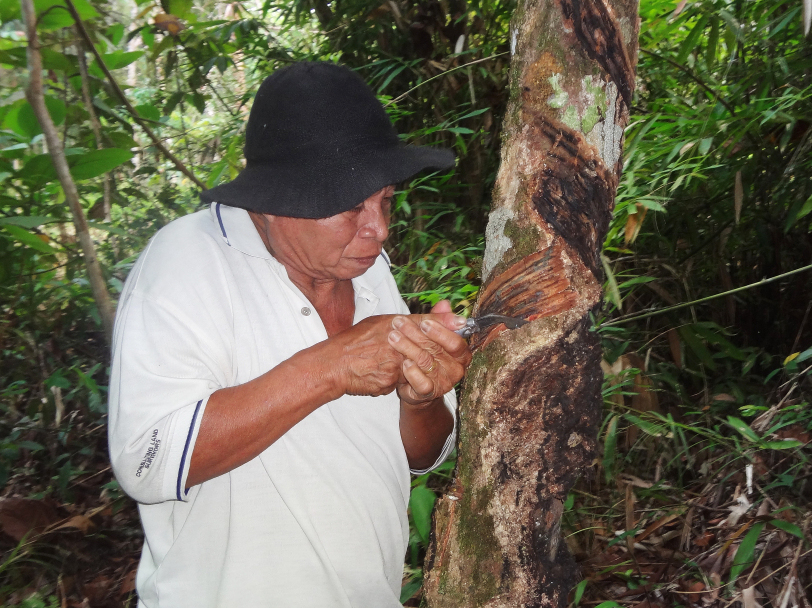 Layan Lujum, 80, Sekendal's village chief, cuts grooves in one of his rubber trees. Indigenous people in Borneo say they can make more money selling the latex sap from rubber trees than working on the area's palm oil plantations.

Environmentalists say Layan's lifestyle is a form of "indigenous knowledge" that has allowed the Dayaks to both use and protect Borneo's forests. But those same forests are now a staging ground for a complicated clash. It involves economic growth, land rights and environmental concerns, development and traditional cultures, as well as a broader fight in Indonesia against entrenched corruption.

'This Is Our Sacred Grove'

Back near Sekendal, Layan explains how the Dayaks in his community view ownership of the surrounding land.

"These stands of bamboo don't belong to anyone in particular. Anyone can take some," he says. "The rubber trees belong to me. The bamboo here is very abundant. If you go upstream, there's even more."

This is not virgin forest, Layan says. It's owned by the community, and it's been cleared and replanted with useful flora such as cocoa and rambutan trees. There is one stand of virgin forest left in the area, but it's used for something very different.

"This is our padagi, or sacred grove," Layan says in a hushed voice. "It's been here since the time of our ancestors, and we come here to pray."

Birdsongs resonate through the forest canopy towering overhead. Down below, moss grows on an altar for making sacrifices. The spirits of the Dayak ancestors inhabit this hallowed glade, Layan says, and it is forbidden to take any plants or animals out of it. "We come here to ask for help in times of trouble, for example in times of war, and then we are victorious," he says. "We ask for bountiful rice harvests. We ask for the sick to heal. We make offerings to the spirits, even though we can't see them."

Indonesia remains Asia's most-forested nation, but it has suffered serious deforestation in recent decades, contributing to Indonesia's status as the third-largest emitter of carbon after the U.S. and China.

And perhaps there is no starker example than Borneo — roughly three-quarters of which belongs to Indonesia, the rest to Malaysia and Brunei.

Conservationists are urging Indonesia's government to respect the Dayak's rights to their traditional lands and to affirm their stewardship of the forests based on their animist religion. But in much of Borneo, it appears too late.

Where forests once stood, towns now hum with traffic and commerce. According to Indonesian government statistics, 60 percent of Borneo's rainforests have been cut down. Only 8 percent of its virgin forests remain, mostly in national parks. Western Borneo is the most denuded.

Efforts to combat deforestation are under way. In May, the Indonesian government announced a two-year moratorium on cutting down virgin forests. As well, a U.N.-backed scheme will see developed countries paying Indonesia to protect its rainforests.

But it's too soon to say how effective these measures will be, calling into question the sustainability of Indonesia's current economic boom, which is largely dependent on the extraction of natural resources. 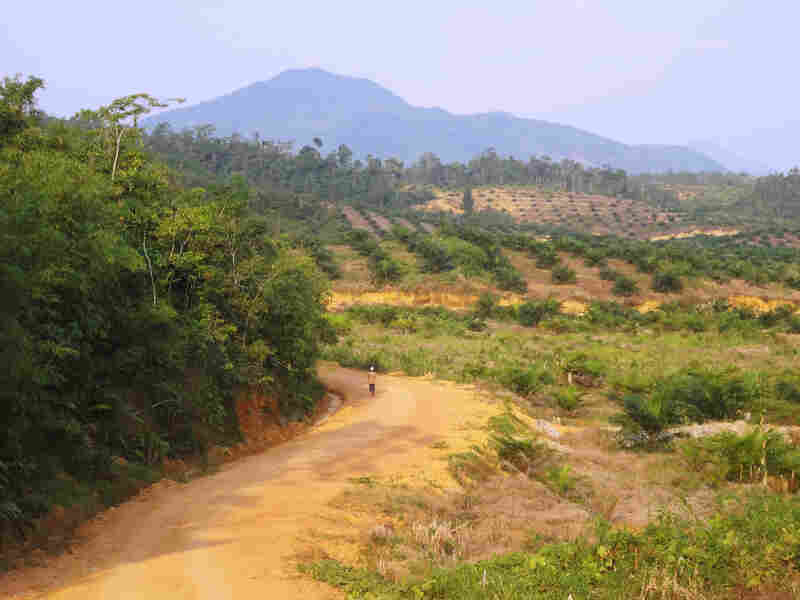 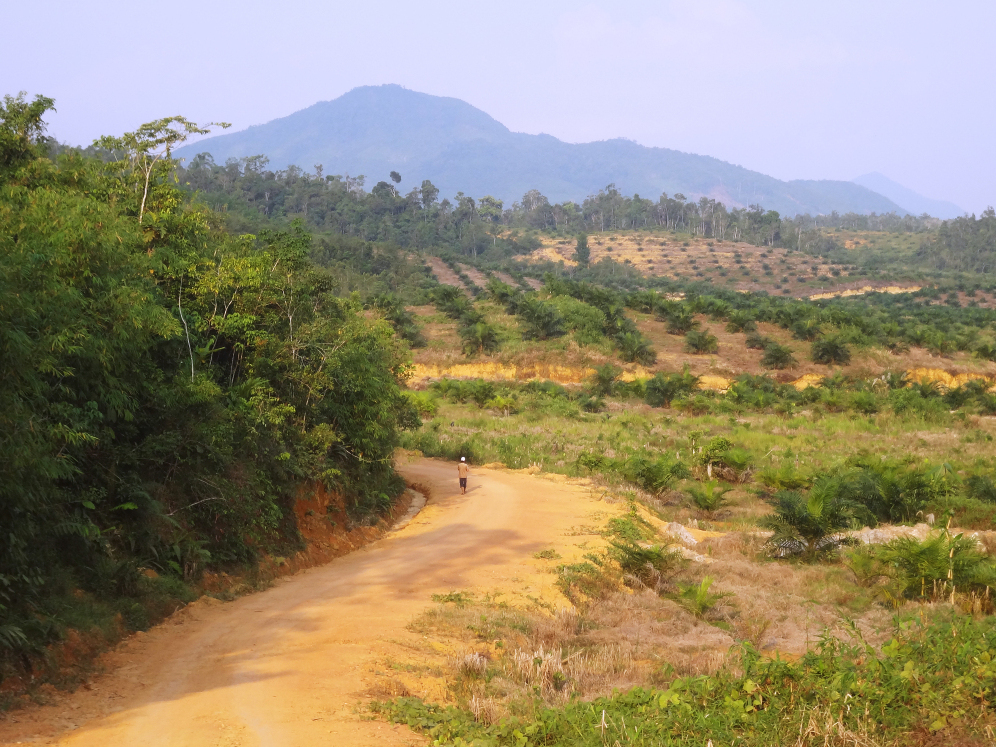 Palm oil plantations cover the hills of western Borneo, where the world's oldest rainforests once stood.

Many Dayaks see it as just a matter of time before paved roads reach their villages and palm oil companies buy their land to convert into plantations.

Farmer Lambai Sudian sold his 25 acres of land for the equivalent of about $1,000. He says the company offered locals jobs on the plantation, water, roads and 20 percent of the palm oil profits. Four years later, none of it has materialized.

"Of course I regret selling," he says. "I regret it because the company didn't do what it said it would. If it did, we would be getting a share of the profits, and we'd be fine."

Sujarni Alloy is an activist with a civic group called the Indigenous People's Alliance of the Archipelago. He says his village's land was sold to a palm oil company without residents' knowledge or consent.

"In the future, the children and grandchildren of the indigenous people will not own these lands," he says. "They will become beggars or criminals, because the bounty before their eyes is no longer theirs."

Some of Indonesia's laws and policies recognize indigenous people's rights to their traditional lands. But the constitution says all land and resources belong to the state.

Andy White, a coordinator at the Washington, D.C.-based Rights and Resources Initiative, a coalition of groups focusing on land rights, says this confusion over rights is a recipe for conflict.

"Seventy percent of the territory of the country, tens of millions of people are essentially squatters on their own historic lands," he says. "And over 20,000 villages are in this contested status, basically sitting on land that they think is their own and the ministry of forestry claims as their own."

In the future, the children and grandchildren of the indigenous people will not own these lands. They will become beggars or criminals, because the bounty before their eyes is no longer theirs.

The ministry denies the allegations. But Kuntoro Mangkusobroto, a troubleshooter for Indonesia's president and the chairman of a government task force on deforestation and climate change, says the reports are "not surprising."

Indonesia's Corruption Eradication Commission will investigate suspected illegal grants of forested land, but Kuntoro says that the problem has become deeply entrenched and hard to root out.

"Forests are a means for the power holder to maintain his power, by giving concessions to the military commander in the regions, governors or those who can support the regime," he explains. "You cut trees, you got money, OK? And it's been practiced like that for 40 years."

Conservationists' hopes of saving Borneo's rainforests and its inhabitants' traditions may be unrealistic, romantic, or simply too late. They may also obscure indigenous peoples' fight to control the terms on which they develop and modernize. Some Indonesians see the Dayaks as culturally backwards, and many Dayaks themselves seem unsentimental about shedding the ways of their forefathers.

White, of the Rights and Resources Initiative, notes that forests can be re-grown to support communities and store carbon. Indigenous people have the right to choose their own path of development, he adds, and the issue of rights will not go away with the destruction Indonesia's forests.

"Of course it's sad, of course it should be stopped, but that does not diminish the importance of this issue," he says, "or the potential of these lands to be restored and for these communities to live much better lives in the future and for these areas to contribute much, much more to their country's development."