Accessibility links
Alice Waters: 40 Years Of Sustainable Food Waters founded her Berkeley restaurant, Chez Panisse, long before "organic" or "locally grown" entered the vernacular. In 40 Years at Chez Panisse, Waters looks back on the sustainable food movement and the momentum it has built in recent years. 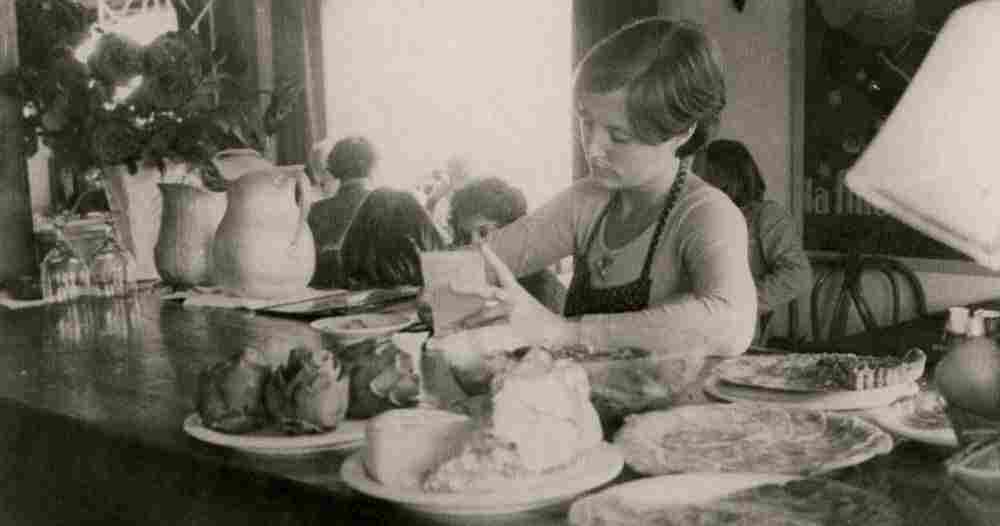 Alice Waters opened Chez Panisse in a house in Berkeley, Calif., in 1971. In the earliest days of the restaurant, Waters wore a variety of hats: chef, menu planner, CEO and waitress. Courtesy Alice Waters hide caption

Four decades ago, restaurateur and food activist Alice Waters was at the forefront of the now flourishing locally grown, organic food movement. Her Berkeley-based restaurant, Chez Panisse, has become one of the most famous dining spots in America, known for changing its menu daily to reflect what's in season and for sourcing ingredients from local farmers.

But as a child, Waters almost never went to restaurants — and was extremely picky about what she'd actually put in her mouth.

"My mother made a lot of things because she thought they'd be healthy for us," she tells Fresh Air's Terry Gross. "There were some very unfortunate experiences with whole wheat bread and bananas. I always tried to get rid of that sandwich and eat one of my friends' lunches."

Waters first began to view food differently while in college, when she left the University of California, Berkeley, for a semester to study abroad in Paris. 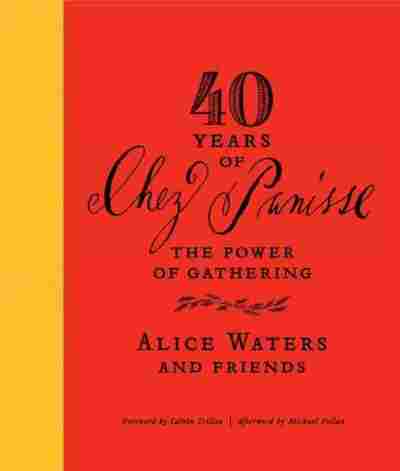 The Power of Gathering

"It was really an awakening for me," she says. "I felt like I had never really eaten before. I had liked certain things but I didn't understand how it fit into people's lives in a delicious way. When I went [to Paris] and walked past the markets and ate in the little restaurants, it was like a revelation. ... So when I came home, I felt like I could really make this happen in my own life."

Chez Panisse opened in 1971 in a house in Berkeley. Over the past 40 years, the restaurant has received honors from Gourmet magazine and Michelin and inspired hundreds of prominent chefs across the world to use locally sourced ingredients. Now the restaurant — and Waters — are both the subject of a new coffee table book, 40 Years at Chez Panisse: The Power of Gathering. The book collects stories and memories from the owners, patrons, restaurant critics, suppliers and chefs who have collectively shaped the restaurant over the past four decades.

When Waters opened Chez Panisse in 1971, she says she assumed that her friends — whom she had been feeding free for several years — would just start to pay her for their meals. She also imagined, she says, that she would be able to linger over the meals with them, sharing stories over dessert.

"I, of course, didn't imagine that I would have to be in the kitchen and I couldn't be at the table," she says. "So I didn't see my friends for a very long time."

In 1983, Waters had a child and decided to hire a chef for Chez Panisse. It was a difficult decision for her, she says, because it meant she would no longer be in the kitchen.

"I decided that my attention would be in the dining room," she says. "I haven't cooked in 28 years at Chez Panisse. ... I didn't intend to be out of the kitchen. ... Now I'm in a different world and I contribute to the collaboration of the kitchen and I'm always working with a group of colleagues who inspire me, but I really miss being actually in the solving of the performance, that effort to really come up with dishes that are delicious and right." 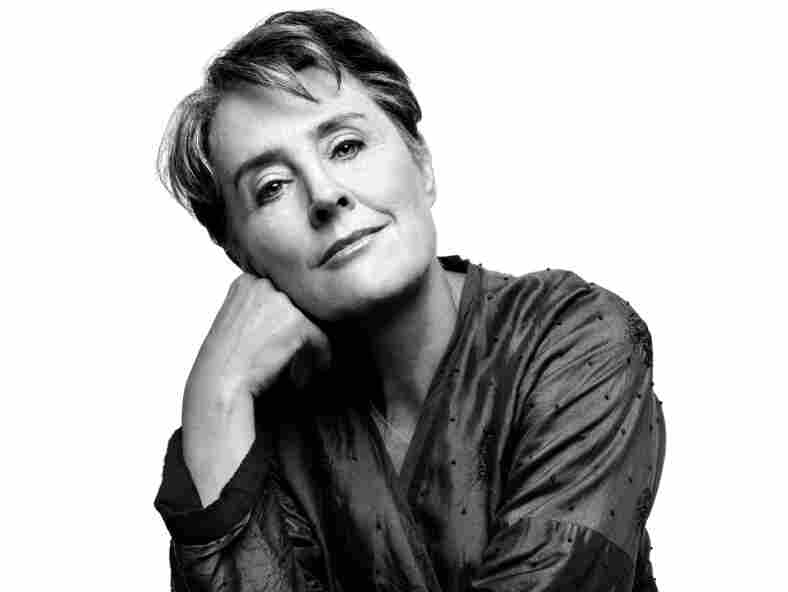 Alice Waters is the author of eight books, including The Art of Simple Food: Notes and Recipes from a Delicious Revolution. Platon/courtesy of the author hide caption

toggle caption
Platon/courtesy of the author 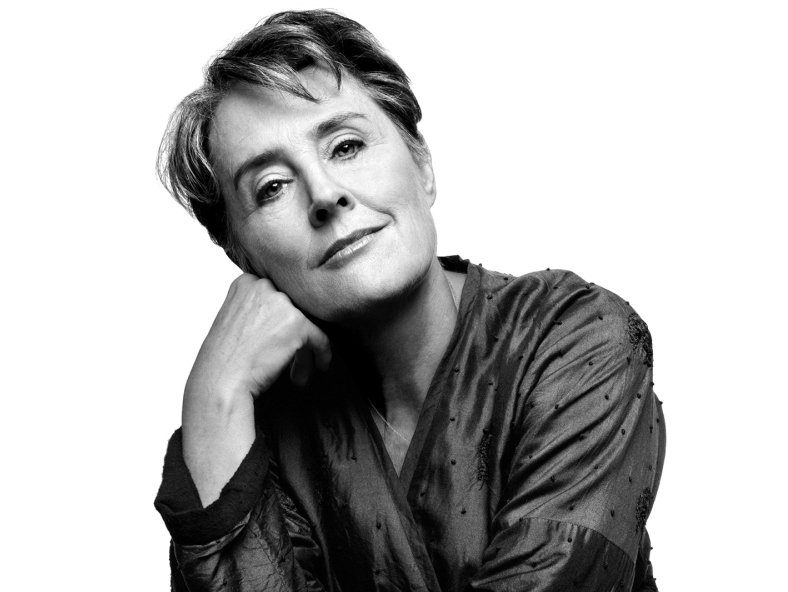 Alice Waters is the author of eight books, including The Art of Simple Food: Notes and Recipes from a Delicious Revolution.

Today Waters oversees Chez Panisse, writes cookbooks, helps design menus and tries to preserve local food traditions through her work with the slow food movement. She also works to bring healthful, local food into public schools around the country. Her foundation has created several "Edible Schoolyards," where students at public schools learn to harvest and grow ingredients that are then used in their lunches.

"We're trying to bring children into a new relationship with food where they have an opportunity to work in a garden," she says. "They know what it is to plant the seeds and pick the weeds and they're learning about what it takes to cook the food. ... We've been separated from this experience through a kind of fast-food indoctrination that's been going on for the last 50 years. So we need to really come back to our senses and really understand, like most every other country in the world, that food is something precious."

Burgers From A Lab: The World Of In Vitro Meat

Michael Pollan On Cooking As A Spectator Sport

On going to restaurants as a child

"I can remember the three restaurant experiences of my childhood. All I wanted to do on my birthday was to go to the Automat in New York ... but I don't know if you consider that a real restaurant."

On working with farmers

"My real emphasis is on the farmers who are taking care of the land, the farmers who are really thinking about our nourishment. I'm looking for them and I know very well that in order to cook something that is really flavorful, you need to have ingredients that are grown in a place where they really thrive and so you're looking to the farmer to plant the right seeds in the right place and care for them, and know when to pick them. ... 85 percent of cooking is about finding those ingredients and then it's so easy after that. You just let them be themselves."

"It delights me to see them surprised and to see them so happy. ... It makes me believe in my mission that if people taste something that's irresistible, it will wake them up like it woke me up when I went to Paris."

"We have to understand that we want to pay the farmers the real price for the food that they produce. It won't ever be cheap to buy real food. But it can be affordable. It's really something that we need to understand. It's the kind of work that it takes to grow food. We don't understand that piece of it."

On the locally sourced fruit bowl at Chez Panisse

On her favorite comfort food