The Trouble With Trillions

The Trouble With Trillions 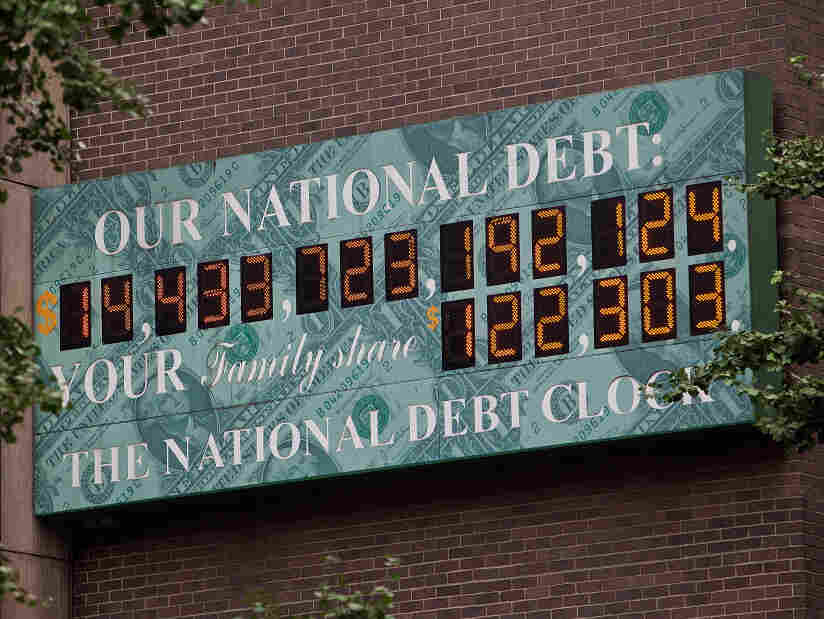 The news this summer is teeming with trillions. The national debt is more than $14 trillion. In a recent report, the credit rating agency Moody's says the 1,600-plus U.S.-based companies it rates harbored some $1.2 trillion in cash at the end of 2010. The newly minted congressional supercommittee is charged with finding ways to pare the federal deficit by at least $1.2 trillion in the next decade.

The late night comics traffic in trillionic quips. "President Obama turns 50 next week," Jay Leno moaned in his monologue recently. "If you're looking to get him something, he could use about $14 trillion."

Craig Ferguson joked: "We are $14.3 trillion in debt, but the good news is we've got 14.3 trillion airline miles."

Trillion. It's the new black — tres chic, tres cher. The higher-water mark. If you're not talking trillions, you're talking chump change. All of a sudden we are tossing the term around like we understand it.

A million has lost its mystique. Austin Powers' Dr. Evil taught us in 1997 that a million is just not very much anymore.

A billion ain't what it used to be, either. Forbes reported earlier this year that there are more than 1,000 billionaires in the world now. China has 1.34 billion people. And 10 American movies have each grossed more than $1 billion worldwide — all in the past 15 years.

The 12-zeroed number used to seem unattainably vast. Only outlandishly unimaginable things were counted in trillions. Cells in the human body (100 trillion) and stars in the visible universe (10 billion trillion).

Now we are routinely trilling about trillions. A trillion here, a trillion there — pretty soon we're talking surreal money.

Blame it on positional arithmetic, our everyday notational system.

For a definition of positional arithmetic, we turn to 19th-century math whiz Pierre-Simon Laplace. He wrote: "It is India that gave us the ingenious method of expressing all numbers by means of 10 symbols, each symbol receiving a value of position as well as an absolute value; a profound and important idea which appears so simple to us now that we ignore its true merit."

The system's simplicity and ease "put our arithmetic in the first rank of useful inventions," Laplace observed. "And we shall appreciate the grandeur of this achievement the more when we remember that it escaped the genius of Archimedes and Apollonius, two of the greatest men produced by antiquity."

The blog Math Drudge calls positional arithmetic "one of the greatest, if not the greatest, single discovery in the field of mathematics."

Daniel Rockmore, a professor of mathematics at Dartmouth College and author of Stalking the Riemann Hypothesis: The Quest to Find the Hidden Law of Prime Numbers, says, "In a math way, there isn't really much interesting — to me — regarding the differences between billion, trillion, et cetera. That's the great advance of positional arithmetic — just add a few more zeroes, and for each one, get another 'order of magnitude.' "

The number of places in the number expresses the order of magnitude. For instance, a billion has nine orders of magnitude. "You might imagine," Rockmore speculates, "that before positional notation we had a greater appreciation for big numbers — the number of symbols you would need would be linear in the size — that is, grow as rapidly as the number itself. For example, I think that to get 1 million in Roman numerals you'd need to string together 1,000 Ms, and to get 1 billion you'd need 1 million Ms — roughly 1,000 pieces of paper filled with Ms!"

Positional notation, Rockmore says, "only grows 'logarithmically' in the size of the number — an extra multiple of 10 adds that single digit. Hardly noticeable!" In other words, the difference between 1 billion and 1 trillion is merely three additional zeroes — flicks of the wrist.

In fact, positional notation is so simple, it's almost boring. It doesn't demand that the brain really grapple with the huge chasm between a billion and a trillion. Rockmore likens the feeling "to the ennui of the modern travel versus the difficulties of days past. Even in the 17th century, if you traveled 1,000 miles, you'd know it. Today, hop on a plane, and three hours later, you're there — assuming you didn't spend another three hours in preflight security."

How Much Is That?

So how do we reconnect with our ancient awe, our wonder at the number that is a trillion?

If you spend $1 million a day for a million days [about 2,740 years, according to Wolfram Alfa], you'll reach $1 trillion, American University mathematician John Nolan told Reuters in 2006. To spend $1 trillion in the average American life span of 77 years, you will have to shell out about $35,580,857 every day.

Time magazine put it this way in 2009: "When trying to comprehend a trillion-dollar deficit, you might calculate how much money that represents per person in the U.S. One trillion dollars divided by 300 million Americans comes out to $3,333."

One trillion seconds add up to 31,688 years, The Associated Press points out.

In a 1981 address, President Reagan explained to Congress that a stack of a trillion $1 bills would be 67 miles high.

But even with the help of the Gipper and analogies and positional arithmetic, a trillion can be mind-boggling for some.

Mathematician Daniel Rockmore brings us back down to earth. "It's worth remembering that, in some cultures, the counting system goes 1, 2, many," he says. "Maybe that's the real point. Anything bigger than 2 is already confusing."