Accessibility links
When Wanting Beauty Becomes An Unhealthy Obsession A third of rhinoplasty patients have body dysmorphic disorder, a new study says. Those with BDD are preoccupied with an imagined physical defect that others can't see — concerns that interfere with daily life. Michel Martin discusses BDD's effects on communities of color with plastic surgeon Anthony Youn. 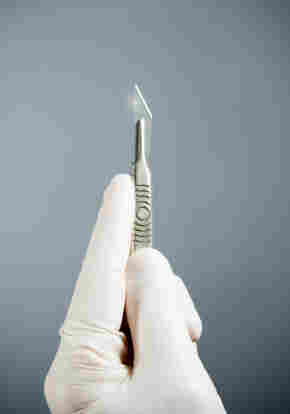 New research shows that body dysmorphic disorder, or BDD, appears in about one-third of patients who've undergone plastic surgery to alter the look of their noses. BDD is an excessive concern about a perceived or minor defect in one's appearance ... to the extent that it disrupts daily life.

The research appears in this month's issue of Plastic and Reconstructive Surgery — the official medical journal of the American Society of Plastic Surgeons.

Board-certified plastic surgeon Anthony Youn told Tell Me More host Michel Martin that the new study is from Belgium, where plastic surgeons interviewed 266 patients who came into their offices for nose-related surgeries.

Among those who had functional issues with their noses , such as breathing complications, only 2 percent of them had BDD-related symptoms. But among those who sought rhinoplasty — a nose job — for cosmetic purposes, 33 percent had moderate to severe BDD.

BDD is a psychiatric condition in which people look in the mirror and see something completely different from what everybody else sees, Youn says.

He says their concerns about body image are way out of proportion. For example, a small bump on the nose appears to them to be the size of a melon.

"These patients undergo, unfortunately, multiple plastic surgeries to correct a perceived defect that was never really there in the first place. And this can create a spiraling down of these people in their whole life to the point where almost 30 to 50 percent of them have tried to commit suicide," says Youn.

Youn says there are potential neurological reasons for BDD, but social influences are major factors.

"We're really a society that is based on a Caucasian ideal of beauty. If you ever look at People magazine's '50 Sexiest People in the World,' there are very few No. 1 Asian-American males in that demographic in those groups. And you see that also with other types of ethnicities," Youn said.

And the country with the highest per capita rate of plastic surgery is South Korea, says Youn.

"I was born in the States, but my parents are Korean. They're from South Korea. So I've seen this culture of plastic surgery from afar with my relatives," he says.

He shares the story of his aunt, whose teenage daughter was sent to Korea to have plastic surgery done. They were all at a family reunion, and the aunt looked at her daughter and said, "Oh look how ugly you are. You need to get your nose redone and your eyelids redone. Tony, don't you think she should do that?"

He says he does not support such surgeries for minors, or even anyone in their early 20s.

Grappling With His Own Reconstructive Surgery

But when Youn was a teen, he too went under the knife to reduce his jaw line.

So is he part of the cycle that pushes people toward a narrow aesthetic?

He says he's very conflicted about this.

"I have been performing these types of procedures we talk about. Although, honestly, as I've gone forward in my career, I perform less and less of them, and I'm less and less comfortable with doing it," he says.

When talking with his own patients and their families, Youn tries giving them as much insight as possible into health and body image issues. But he says the problem is that they then turn to other doctors who may be more willing to fulfill their requests.

Youn says in general, society is getting better with embracing more ethnic diversity in beauty ideals but there's still a long way to go.