Accessibility links
Martyrdom Or Asylum For Gadhafi? Former U.S. diplomat David Mack says it could be family considerations that lead Libyan strongman Moammar Gadhafi to seek asylum while his country strains to keep order. The Libyan leader's whereabouts are still unknown as opposition forces battle loyalist troops for control of the capital. 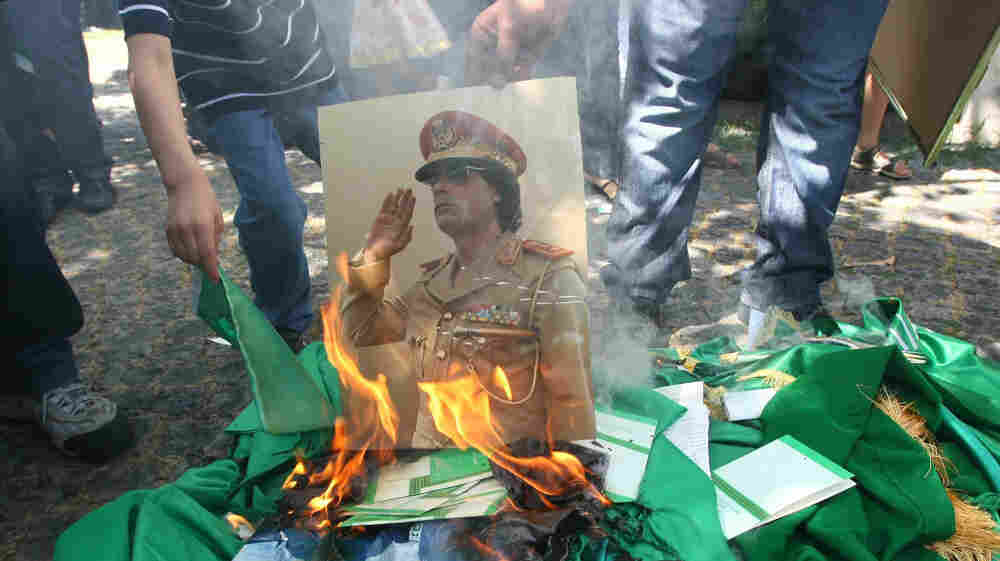 Protesters burn a portrait of Libyan leader Moammar Gadhafi and copies of his Green Book outside the Libyan Embassy in Ankara. Turkey, on Monday. Libyan rebels have taken many parts of the Libyan capital, Tripoli, as they try to oust Gadhafi. Adem Altan/AFP/Getty Images hide caption

Libyan rebels have claimed control of parts of the capital Tripoli, but big questions remain about the future of the country and the fate of its longtime leader Moammar Gadhafi.

The whereabouts of Gadhafi, as of Monday, remain unknown.

David Mack is a former U.S. diplomat who served throughout the Middle East, including a posting in Libya. He says he believes Gadhafi could very well seek asylum for himself and his family in a country like Russia.

And he predicts that the difficulties facing Libya, from maintaining security to providing basic services, will be exacerbated by its historic lack of infrastructure and institutions.

We spoke to Mack, now a scholar at the Middle East Institute, about Libya's future.

What might Gadhafi do — fight to the death, commit suicide, slip into the desert, negotiate his exit into exile?

Mack: I think that eventually, provided he's offered safe asylum somewhere for himself and members of his family not already captured, he might be inclined to take it. It would have to be someplace like Russia, where the United Nations Security Council could make the request, and provided he'd be exempt from International Criminal Court tribunals. Someplace that could be strong and stable enough to keep him from getting in trouble and keep him safe. I think that the Russians want to be in on the end game. Our role would be to provide international endorsement, and to save Libyan lives.

If it were just him, I think he would be attracted to martyrdom. But along with being a political tyrant, and somewhat emotionally erratic, he's also a father and a grandfather. And he cares about his children.

We know he broke a very productive relationship with Switzerland in order to retaliate for his juvenile delinquent son spending a night in a Swiss jail.

You can imagine those security people upon whom he depends, and his wife and children, saying "oh, Brother Leader; oh, Daddy."

What do you think the U.S. might be quietly doing to prepare for a rebel takeover of the government?

They're going to have to try to maintain order. Certainly for people like me, whose memory stretches back 20 or 30 years, what happened in Baghdad is a reminder of how wrong things can go with the overthrow of a tyrannical leader. Looting, revenge killing. Even when there are no longer holdouts, things can go very bad. Security is initially the single most important element. And they have to ensure that basic utilities are up and functioning. They have to get electricity back, get potable water. The Libyan bureaucracy and infrastructure are already dysfunctional.

There will be a tremendous amount of suffering and humanitarian problems unless things are done very quickly. The TNC [Libya's Transitional National Council] and the United Nations have already been planning, with input from governments like the U.S.

The U.S. is a big part of the United Nations, and a big part of NATO. But my contacts with the people in the TNC suggest they don't want to have any American boots on the ground. The U.N. could be involved with international peacekeepers.

We understand that there was a rebel military unit composed of young men from Tripoli, organizers, who were sent to Qatar, and then re-integrated. They could go in and help people keep order. Presumably, that would be more acceptable than people coming in from Benghazi.

Libya is a tribal society, and there have always been deep divisions. Is a civil war likely?

It is true that ... extended family connections, even more than tribal connections, are extremely important. But you don't have a large sectarian majority as you do in Iraq and Bahrain. There isn't that kind of problem. The problem is a lack of structure and institutions. Gadhafi dismantled what little structure and institutions there were. What little the monarchy had built up was dismantled. You don't have a strong and effective army to restore order.

I'm suggesting that civil war is far less likely than anarchy, the chaos of a Somali situation. I don't want to undervalue what the Transitional National Council has done in a relatively short amount of time. If the Iraqi national council had done as much, we would have been very happy. The ones I know [on the TNC], the ones I met when they were Gadhafi officials, were very good professionals. And we've sent a very good American diplomat to head up our office in Benghazi.

How would you compare Libya's revolution to the others we've seen in the region?

In Libya's case, you don't just have an authoritarian leader who stayed too long. What you have in addition is a country without a political structure on which you can build a democratic structure. Libya was scarcely ready for independence when it received it in 1952. The monarchy didn't develeop it. Gadhafi squandered it. A lot of things have to be done from scratch and it's going to be very difficult.