Accessibility links
A New Obstacle To Normal Relations For Sudan, U.S. Sudan says it has met the demands of the international community and wants U.S. sanctions lifted. But the two countries are at odds over recent fighting in the southern part of Sudan. 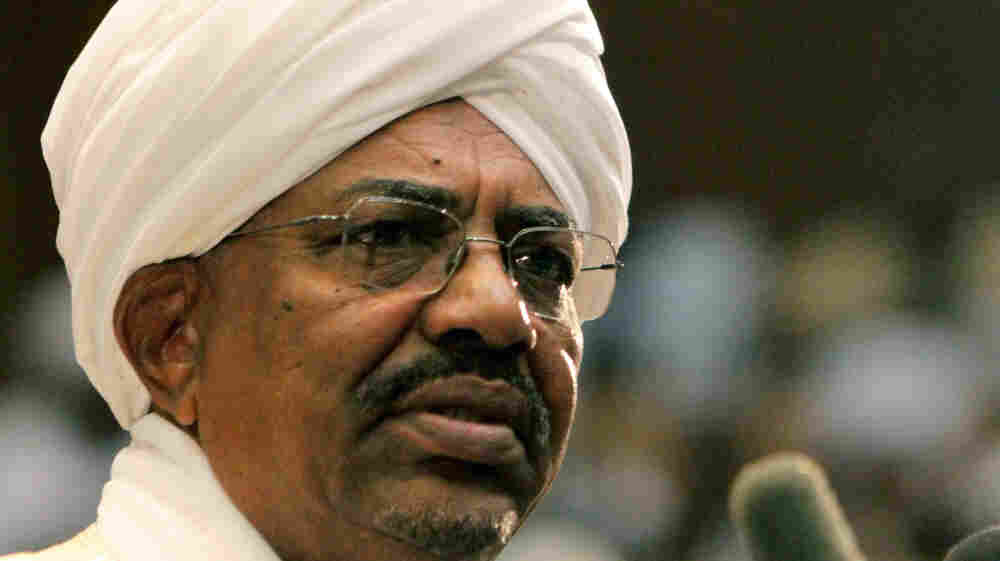 Sudan's President Omar al-Bashir speaks of the capital Khartoum on July 12. Sudan says it should be taken off the U.S. terrorism list, but Washington says it is concerned about new fighting in the south of the country. Ashraf Shazly/AFP/Getty Images hide caption 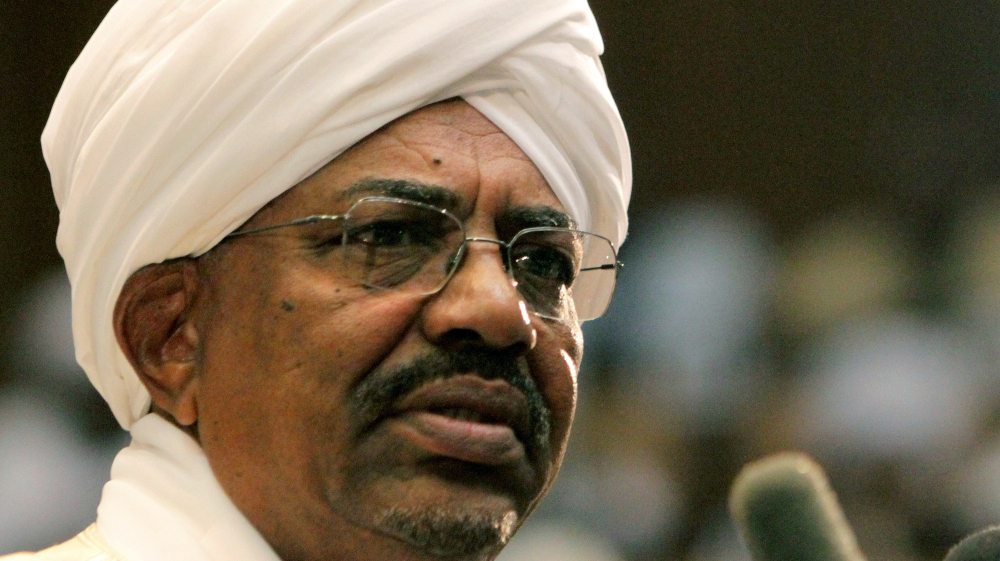 Sudan's President Omar al-Bashir speaks of the capital Khartoum on July 12. Sudan says it should be taken off the U.S. terrorism list, but Washington says it is concerned about new fighting in the south of the country.

When Sudan allowed South Sudan to become an independent nation last month, it hoped this would put an end to years of friction with the United States.

More specifically, Sudan desperately wanted to be removed from Washington's list of state sponsors of terrorism and get out from under the many sanctions that come along with that designation.

But now the U.S. and the United Nations are raising concerns about fighting, and possible atrocities, near the border between Sudan and South Sudan.

Sudan's President Omar al-Bashir is promising a cease-fire, and he traveled Tuesday to the troubled region known as South Kordofan. But he also said that foreign organizations would be kept out of this remote area.

Mahdi Ibrahim, a former Sudanese ambassador to Washington and now a prominent member of Parliament, says his country is changing, and so too should its relationship with the U.S.

"An era has come to an end," he says. "The new Sudan needs to be listened to."

From his perspective, Sudan did what the U.S. and other members of the international community wanted.

After a long and brutal civil war in the south that ended with a peace treaty several years ago, Sudan agreed to let the people of southern Sudan vote on independence. They opted for it in overwhelming numbers. Sudan's government not only accepted the outcome, but Bashir attended the independence celebrations in South Sudan on July 9.

"We have been promised time after time ... that once a peace agreement is passed, Sudan will be lifted from the list of countries harboring terrorism," Ibrahim says. "But each time we realize the bar is raised."

Ibrahim says the fighting in South Kordofan is the latest example of that rising bar.

Sudan accuses rebels of starting the conflict, though a recently released U.N. report alleges that the Sudanese military is responsible for possible war crimes.

And the U.S. ambassador to the United Nations, Susan Rice, points out that U.N. peacekeepers are no longer on the ground to check.

"We are really flying blind, so when the high commissioner for human rights calls for an immediate, independent and comprehensive investigation, it is vital that that occur," Rice says.

The U.N.'s humanitarian coordinator, Valerie Amos, is also worried about the basic needs in the troubled region.

"We have not been able, for example, to resupply in terms of food aid and I'm worried, yes, of course, that it is running out," says Amos. 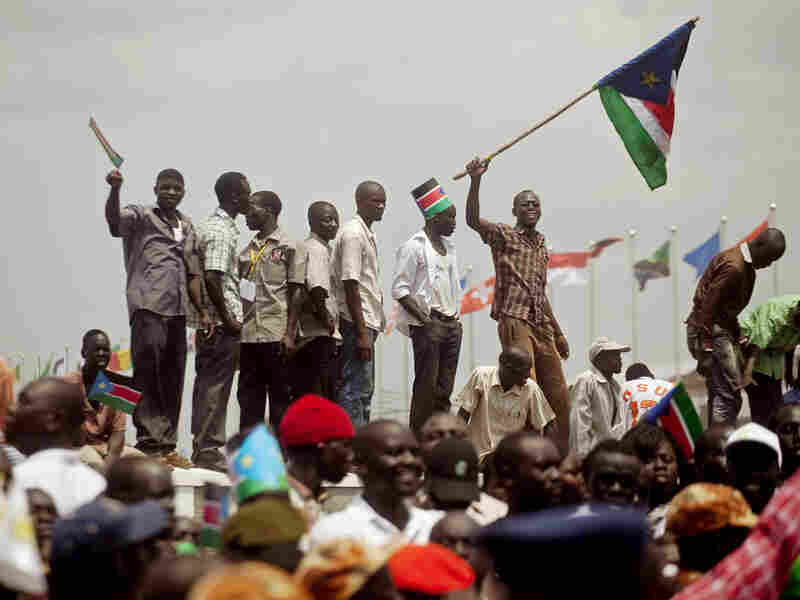 Southern Sudan celebrates its independence from Sudan on July 9. The U.S. welcomed the move, but still has differences with the Sudanese government. Pete Muller/AP hide caption 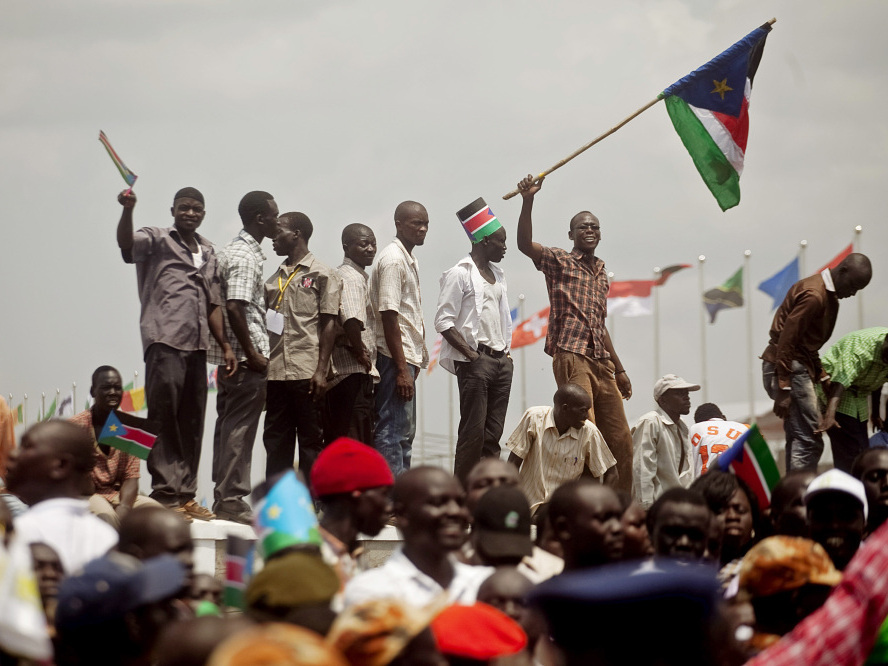 Southern Sudan celebrates its independence from Sudan on July 9. The U.S. welcomed the move, but still has differences with the Sudanese government.

Sudan allowed a small group of U.N. officials to go to South Kordofan to assess the needs. But Ibrahim, the former ambassador who now chairs the foreign relations committee of Sudan's Parliament, is suspicious about the U.N.'s motives.

"Out of all these experiences, we feel that this is an open project of continued intervention into Sudan," he says. " 'Don't allow this country to be stable,' is the very clear message that we see."

Rice firmly rejects that, saying the U.S. and others want to see a new, peaceful Sudan. But she points out that the government has a long record of carrying out atrocities in South Sudan and Darfur and she is worried about what might be happening now in South Kordofan.

"That we have to begin to speculate is the result of the fact that they don't want the international community to be able to validate these horrific reports of everything from mass arrests, to executions, mass graves, and aerial bombardments," Rice says.

Given the lack of access, activists are trying to shed light on reported atrocities in South Kordofan by releasing satellite images of what they say are mass graves.