Accessibility links
The New Apostolic Reformation: The Evangelicals Engaged In Spiritual Warfare A new Christian movement that seeks to take dominion over politics, business and culture in preparation for the end times and Jesus' return is becoming more of a presence in American politics. Rachel Tabachnick, who researches the religious right, explains its beliefs and influences. 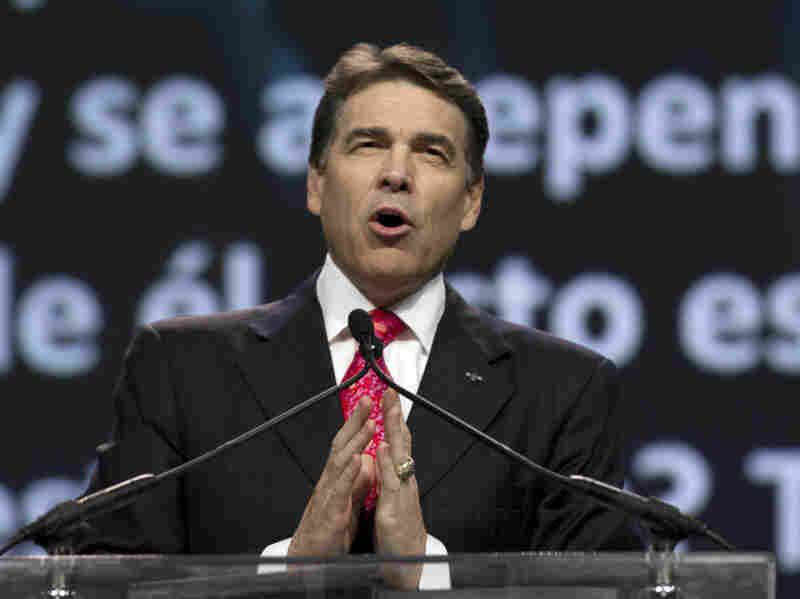 Texas Gov. Rick Perry prays at The Response, his call to prayer for a nation in crisis, on Aug. 6 in Houston. The event was organized, in part, by members of the New Apostolic Reformation. David J. Phillip/AP hide caption 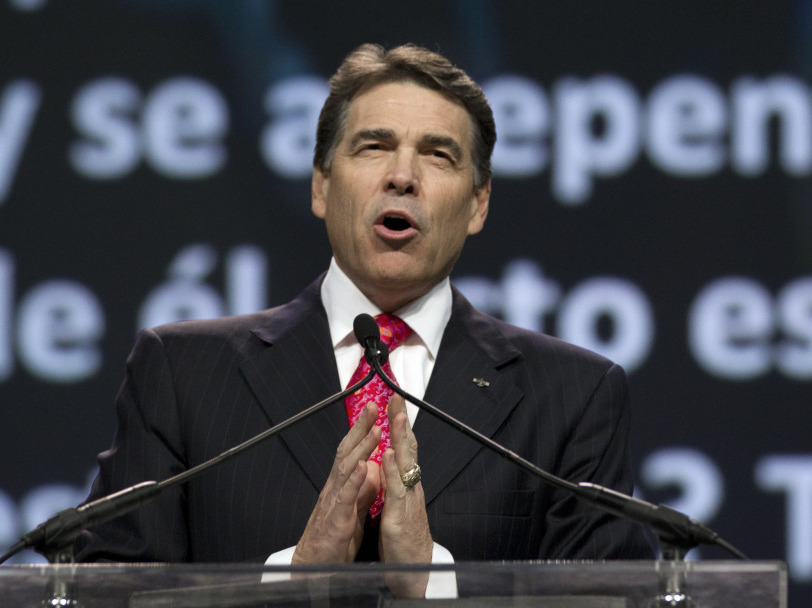 Texas Gov. Rick Perry prays at The Response, his call to prayer for a nation in crisis, on Aug. 6 in Houston. The event was organized, in part, by members of the New Apostolic Reformation.

An emerging Christian movement that seeks to take dominion over politics, business and culture in preparation for the end times and the return of Jesus, is becoming more of a presence in American politics. The leaders are considered apostles and prophets, gifted by God for this role.

The international "apostolic and prophetic" movement has been dubbed by its leading American architect, C. Peter Wagner, as the New Apostolic Reformation (NAR). Although the movement is larger than the network organized by Wagner — and not all members describe themselves as part of Wagner's NAR — the so-called apostles and prophets of the movement have identifiable ideology that separates them from other evangelicals.

Two ministries in the movement planned and orchestrated Texas Gov. Rick Perry's recent prayer rally, where apostles and prophets from around the nation spoke or appeared onstage. The event was patterned after The Call, held at locations around the globe and led by Lou Engle, who has served in the Apostolic Council of Prophetic Elders of the NAR. Other NAR apostles endorsed Perry's event, including two who lead a 50-state "prayer warrior" network. Thomas Muthee, the Kenyan pastor who anointed Sarah Palin at the Wasilla Assembly of God Church in 2005, while praying for Jesus to protect her from the spirit of witchcraft, is also part of this movement.

On Wednesday's Fresh Air, Rachel Tabachnick, who researches the political impact of the religious right, joins Terry Gross for a discussion about the growing movement and its influence and connections in the political world.

Tabachnick says the movement currently works with a variety of politicians and has a presence in all 50 states. It also has very strong opinions about the direction it wants the country to take. For the past several years, she says, the NAR has run a campaign to reclaim what it calls the "seven mountains of culture" from demonic influence. The "mountains" are arts and entertainment; business; family; government; media; religion; and education.

"They teach quite literally that these 'mountains' have fallen under the control of demonic influences in society," says Tabachnick. "And therefore, they must reclaim them for God in order to bring about the kingdom of God on Earth. ... The apostles teach what's called 'strategic level spiritual warfare' [because they believe that the] reason why there is sin and corruption and poverty on the Earth is because the Earth is controlled by a hierarchy of demons under the authority of Satan. So they teach not just evangelizing souls one by one, as we're accustomed to hearing about. They teach that they will go into a geographic region or a people group and conduct spiritual-warfare activities in order to remove the demons from the entire population. This is what they're doing that's quite fundamentally different than other evangelical groups."

The Secret Political Reach Of 'The Family'

The organizers of Perry's rally were from ministries founded by two apostles/prophets of the movement — The Call, and the International House of Prayer founded by Mike Bickle. Bickle, who led part of Perry's event, has claimed that Oprah Winfrey is a precursor of the Antichrist, and Engle has claimed that gay people are controlled by "demonic spirits." Both have served on the Council of Prophetic Elders initiated by Wagner.

"Lou Engle [has spoken] at length about how one of his sons has started an International House of Prayer in the Castro district of San Francisco and that his son is now expelling demons from homosexuals, and supposedly then this cures them of their homosexuality," says Tabachnick. "He has also held [prayer rallies] around the world."

One of Engle's previous rallies took place in Uganda in May 2010, shortly after an anti-homosexuality bill had been proposed.

"Various people got on the stage [at his rally] and promoted the anti-homosexuality bill in Uganda, which is a very draconian bill that would allow for executions for certain offenses, and would also allow for people who don't report homosexual history to be jailed," she says. "The apostles have had a long history in Uganda, and some of them have had close relationships with both political and religious leaders there. In fact, an apostle in Uganda takes credit for promoting the anti-homosexuality bill and was recognized by the parliament in Uganda when the bill was introduced."

Engle has another rally planned in November in Detroit. The purpose of the prayer rally, says Tabachnick, is to "fight the demonic spirit of Islam."

"In other words, [they want] to conduct spiritual warfare against the spiritual demons which they claim hold Muslims in bondage and keep them from converting," she says. "Of course, this is expressed in terms of love. They say 'We don't hate Muslims. We love Muslims. But we hate that they are in spiritual bondage and don't convert to Christianity.' "

Tabachnick, who has been researching and writing about the apostles for a decade, says her own religious background has helped her with her research. She grew up as a Southern Baptist and converted to Judaism as an adult.

"Having the Southern Baptist background and growing up in the Deep South has helped me to be able to do this research and has also helped me realize something that might not be apparent to some other people looking at the movement," she says. "This is quite radically different than the evangelicalism of my youth. The things that we've been talking about are not representative of evangelicalism. They're not representative of conservative evangelicalism. So I think that's important to keep in mind. This is a movement that's growing in popularity, and one of the ways they've been able to do that [is because] they're not very identifiable to most people. They're just presented as nondenominational or just Christian — but it is an identifiable movement now with an identifiable ideology." 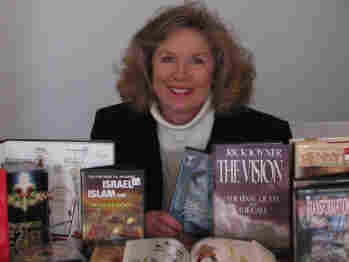 Rachel Tabachnick is an independent researcher and a contributor to Talk To Action. She is also the co-founder of the blog NARWatch. courtesy of the guest hide caption

toggle caption
courtesy of the guest

On the issues of the international "apostolic and prophetic" movement

"[Their issues are] anti-abortion, anti-gay rights — but they also have ... the belief that government should not be involved in social safety nets, that the country is becoming socialist, if not communist ... — all of what we've come to call 'Tea Party issues' of very small government. In the case of the apostles, they believe this because they believe that a large government that handles the safety net is taking away what is the domain of the church and of Christianity."

"Dominionism is simply that Christians of this belief system must take control over the various institutions of society and government. Some things that make this group unique is that they have some unusual concepts of what they call spiritual warfare that have not been seen before in other groups. Spiritual warfare is a common term in evangelicalism and in Christianity, but they have some unique approaches and some unique spins on this that distinguish them from other groups."

"The process [in these videos] is that the people come together, repent, pray together, expel the demons from their community — which they describe in terms of witches and witchcraft — and then the community undergoes a transformation in which there can be miraculous healing, the growth of very large vegetables [and] the end of corruption and crime. What was totally missed by the press was that Muthee was an international leader in the [NAR] movement at the time and recognized because of his role in this series of videos."

On the topics at Rick Perry's rally

"The major topics at these events [are] anti-abortion, anti-gay rights and the conversion of Jews in order to advance the end times. And this was very visible at Perry's events as these apostles led all of these different prayers and repentance ceremonies at [his rally]."