Accessibility links
Restarting Libya's Valuable Oil Exports Won't Be Easy The revolution in Libya has strangled the country's oil exports for months. Even after the current conflict is settled, restarting production and distribution of the high-quality oil, which makes up 2 percent of the world's supply, could take years. 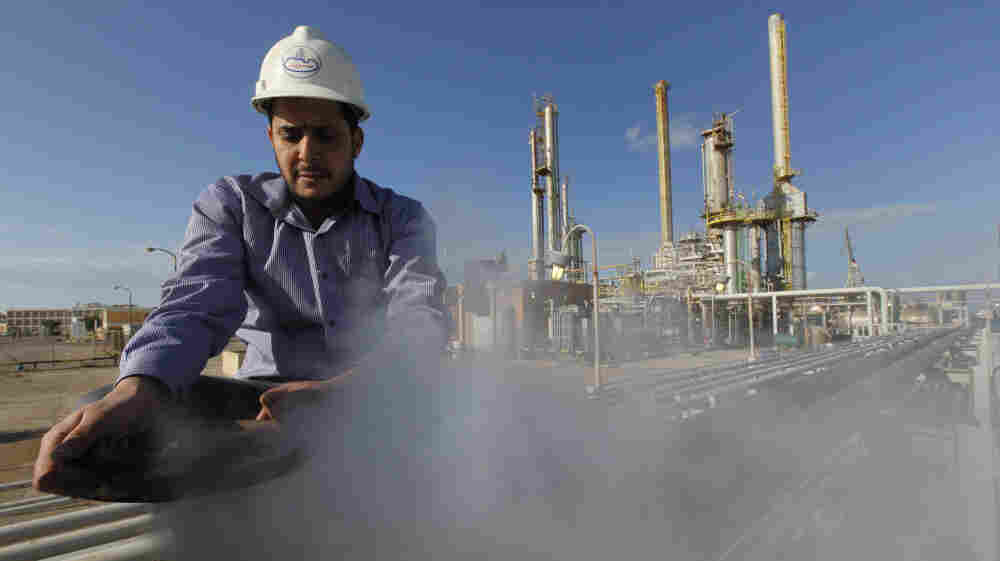 A Libyan oil worker at a refinery inside the Brega oil complex, in eastern Libya, on Feb. 26. Production at Brega has dropped by almost 90 percent amid the country's crisis because many employees have fled, and few ships are coming to the port. Hussein Malla/AP hide caption

The light at the end of the tunnel for Libyans isn't just an end to the Moammar Gadhafi regime — it's also "light, sweet crude."

Oil provides most of Libya's income. But the revolution there has strangled exports for months and starved the country of revenue, and also temporarily bumped up world oil prices. So there's a lot of interest inside Libya and internationally in getting the country's oil wells up and running again.

The question is, when?

Libya's neighbors in the Middle East provide some clues to a time frame. Kuwait and Iraq are both big oil exporters that dissolved into conflict. Oil wells there were shut down or sabotaged, and world prices rose. It was years before their governments could get oil production back to pre-conflict levels.

Libya only exports about 2 percent of what the world uses. But nonetheless, as economist Rayola Dougher of the American Petroleum Institute points out, 2 percent is actually a lot in an oil market that has practically no surplus. "It's that margin of difference between supply and demand in the world," she says, "and when you take off that supply at a time when the world's demand was growing, that can have a very big impact on the price."

That's especially true if what you're selling is Libya's light, sweet crude. That's what refiners prefer, especially in Europe, since it's easier to turn into gas and diesel.

Prices have dropped some, since the revolution broke out as the world's economy drooped and Saudi Arabia increased output. But as economies improve, demand for oil will rise. Will Libya's wells be there to take the pressure off prices?

Technically, it shouldn't be too hard to get most wells started — assuming they weren't sabotaged or damaged. That's especially true for wells that naturally produce oil without a lot of help from pumps. 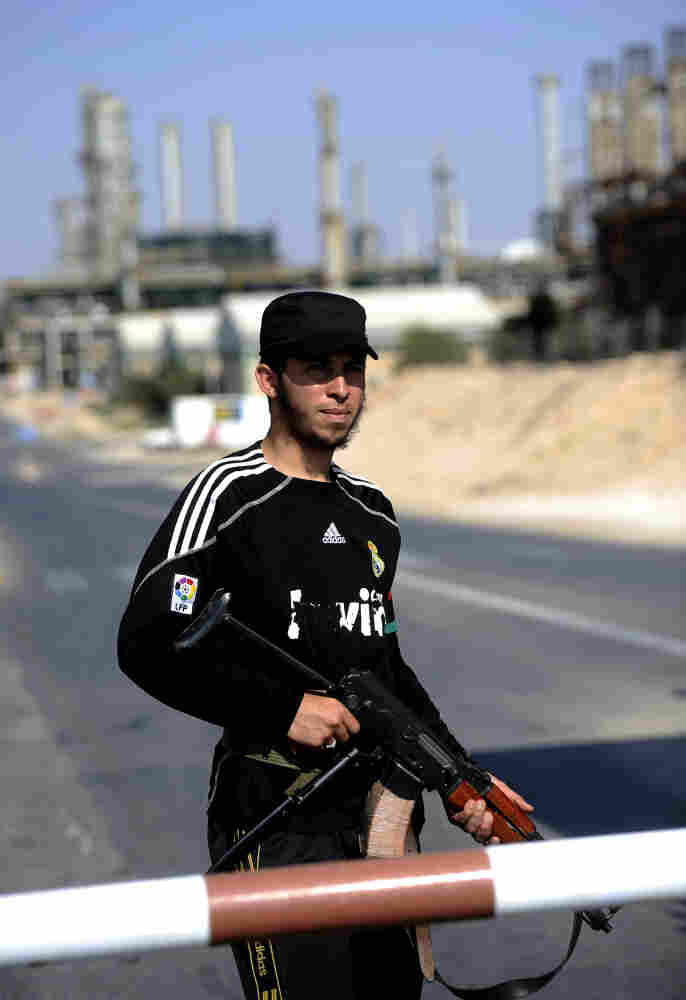 A Libyan rebel stands guard at the entrance to the Zawiya oil refinery, about 30 miles west of Tripoli, on Aug. 19. Rebels have taken complete control of the key oil refinery. Before the conflict, Libya supplied 2 percent of the world's oil, but restarting oil field operations won't be a simple task. Filippo Monteforte/AFP/Getty Images hide caption

"Restarting that type of well can be as simple as opening one valve and flipping one switch," says Daniel Hill, a petroleum engineer at Texas A&M University.

But restarting wells doesn't mean Libya can pump the 1.5 million barrels a day it used to. Libya's oil operation has been standing still for months when it should have been drilling.

"In an oil field operation, it's not just, you know, you go drill a few wells and turn them on and let them go for 10 years," Hill says. "There's a constant drilling of new wells occurring, replacing wells that are abandoned."

Libya faces another problem: Most of its oil workers are foreigners who fled the country months ago.

Nonetheless, international oil companies are eager to get back into Libya. As Dougher from the American Petroleum Institute points out, the biggest obstacle they'll face will be political.

In fact, Libya's politics have long kept the country from pumping as much oil as it did in the 1960s. Jim Burkhard, an oil analyst at IHS Cambridge Energy Research Associates, says when Libya's oil fields opened up again to foreign companies about seven years ago, it was hard going.

"Some of the contracts that were signed in Libya were very advantageous for the Libyan government," says Burkhard, "but they weren't very attractive for some of the investors, so that had the impact of slowing some of the investment."

Even if it takes years to restore high levels of production, though, Burkhard points out that at least the country has a ready asset.

"Libya does have an advantage over Egypt or Syria in that they have a very important asset, namely their oil fields, and they have a relatively small population," Burkhard says.