Accessibility links
Escape From The Urban Jungle: My Month On A Farm For former NPR production assistant Lena Moses-Schmitt, city living can be overwhelming. So she spent one summer month volunteering at an organic farm in Orwell, Vt. Through sunburns and hungry livestock she got the break she needed — but learned that the daily grind is never too far away.

Escape From The Urban Jungle: My Month On A Farm

Escape From The Urban Jungle: My Month On A Farm 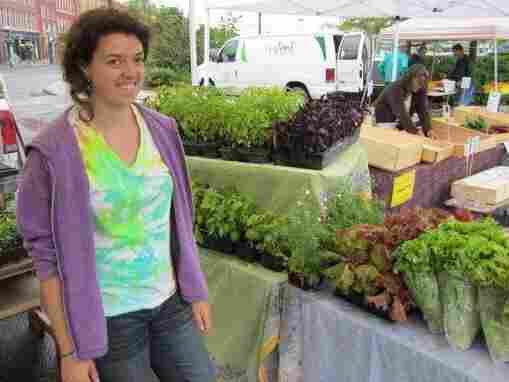 Lena Moses-Schmitt poses in front of Singing Cedars Farmstead's stand at a local market. The farm sold lettuce and herbs, as well as potted plants, strawberries, tomatoes and other items depending on the season. Courtesy of Lena Moses-Schmitt hide caption

Lena Moses-Schmitt has been a volunteer farmer and an NPR production assistant. She is currently a graduate student.

Waking up is never easy. Usually it's my cellphone's shrill alarm that shakes me from sleep and sets my neurons on fire. Time to throw on a pencil skirt, squash into the Metro, and get to work.

But for a month last year, it was the bleating of lambs that got my legs over the side of the bed: guttural baahs emitted from bellies desperate to be fed.

I spent four weeks last summer volunteering on a Vermont farm as part of an eccentrically acronymed program known as WWOOF, or World Wide Opportunities on Organic Farms. In most cases, volunteers work without pay, but live and eat for free.

However hackneyed, going to work on a farm was my attempt at escaping a culture that has a Starbucks on every corner. I was tired of rushing through my day without ever really looking around — unless it was at my phone. 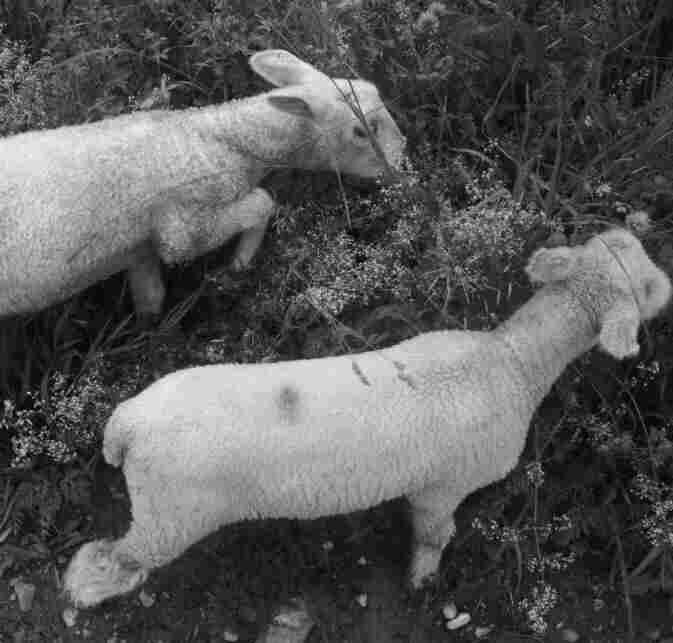 The farm's two lambs, Lamby (top) and Violet, spend their time grazing. One of Lena's many farm duties was to feed them. Courtesy of Lena Moses-Schmitt hide caption 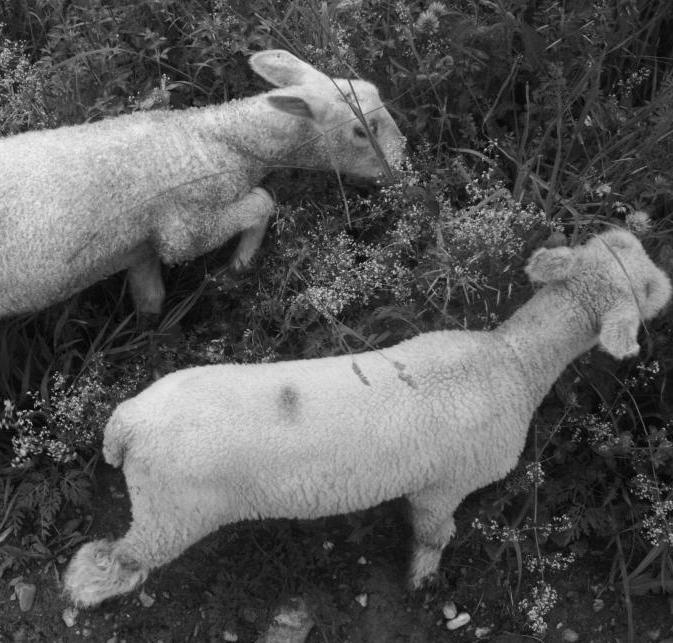 The farm's two lambs, Lamby (top) and Violet, spend their time grazing. One of Lena's many farm duties was to feed them.

For the most part, I got to experience the lifestyle that I was looking for. The farm's hens popped out over 20 eggs a day. We volunteers ate them ravenously over rice or toasted bread. We plucked strawberries, red and hidden like little tongues among itchy vines.

A happy stripe of sunburn perpetually stretched itself across my lower back from the hours spent planting and weeding. My fingers slowly grew calloused and dirt-stricken, and I marveled at a working world that would let me swap my skirt for a pair of durable denims.

But as for escaping the loud hum and rush of a big city — I found that I immersed myself in a different sort of daily grind altogether, albeit a greener and wilder one.

Instead of my alarm clock beckoning me to work it was the whining of livestock. The roads of the farm's small Vermont town certainly weren't overrun with traffic, but the strawberry vines were congested with an alarming number of reddish bugs that instilled a similar sense of frustration. My irritation at the mosquitoes in the barn apartment where I slept was akin to what I felt pressing sweaty shoulders and stomachs against other Metro riders during rush hour.

Unaccustomed to kneeling for long periods of time, I had trouble keeping up with the seasoned volunteers, who plunked down and planted with ease. I felt like any naive, bright-eyed intern at a typical city job, fumbling with a simple copy machine as all the other employees go expertly about their work. 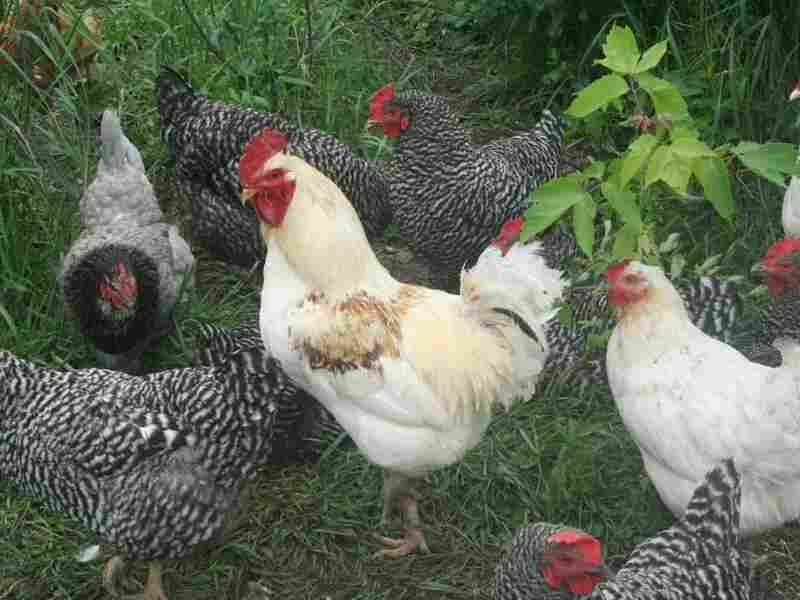 Singing Cedars' hens lay over 20 eggs a day. Here they are shown picking at their food. /Courtesy of Lena Moses-Schmitt hide caption 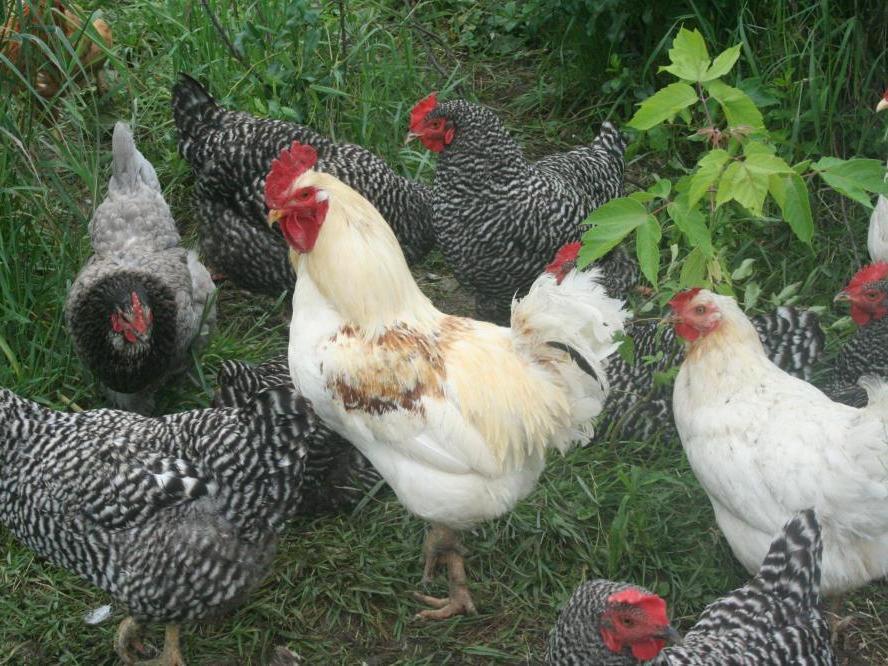 Singing Cedars' hens lay over 20 eggs a day. Here they are shown picking at their food.

And as it turns out, there is no such thing as an escape from Starbucks.

Apparently, a few weeks before my arrival, a delivery truck encountered a sharp bend on a road nearby, tipping its contents to the earth in a sticky sweet offering. Soon people came from all over, scooping up as many dented cartons of Starbucks ice cream as they could.

The dessert turned into a sort of sly, unofficial currency for miles around. As in, "I'll trade you a dozen eggs for a pint."

So every afternoon, sitting among the tittering animals, we consumed a pint each, licking those spoons clean for all they were worth.

Who knew? The convenience of city life, at the end of a day of squatting in the sun, actually tastes pretty good.