Accessibility links
Grizzlies Test Products To Keep Out The Average Bear A park in Montana enlists animals that have had close contact with humans to help prevent other bears from getting hooked on human food. For 60 minutes, a bear will poke, prod and smash supposedly bear-resistant coolers, trash cans and more — and if they can't get in, the products pass the test. 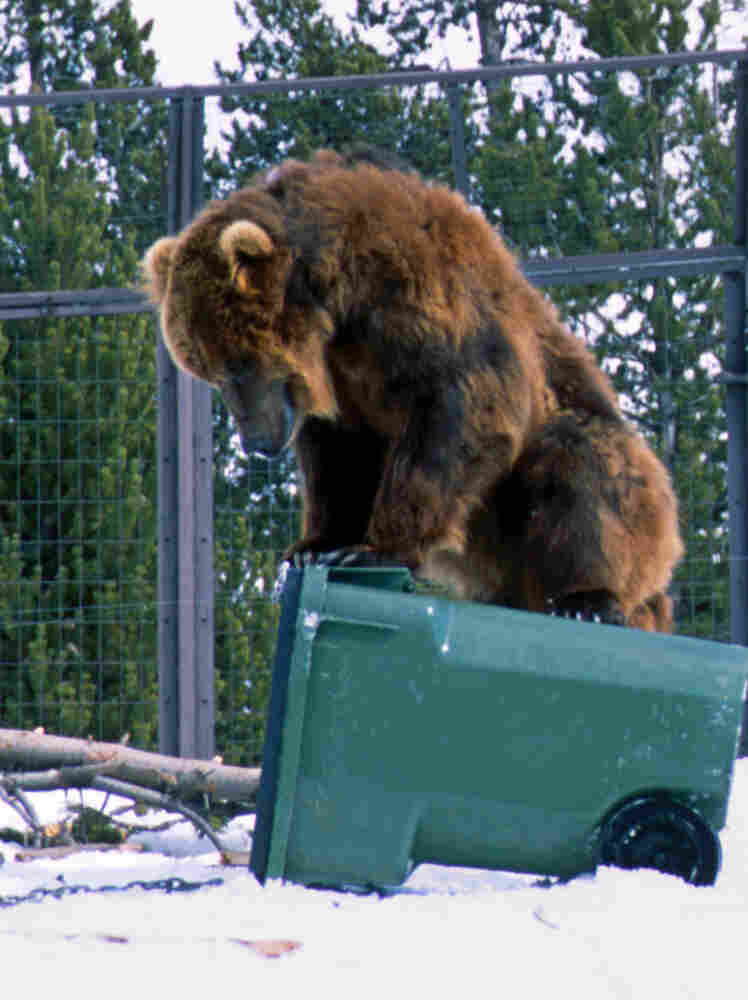 Sam, a 700-pound grizzly at the Grizzly & Wolf Discovery Center in West Yellowstone, Mont., attempts to pry open a storage container as part of a program to certify products for use in grizzly habitats. U.S. Forest Service/AP hide caption 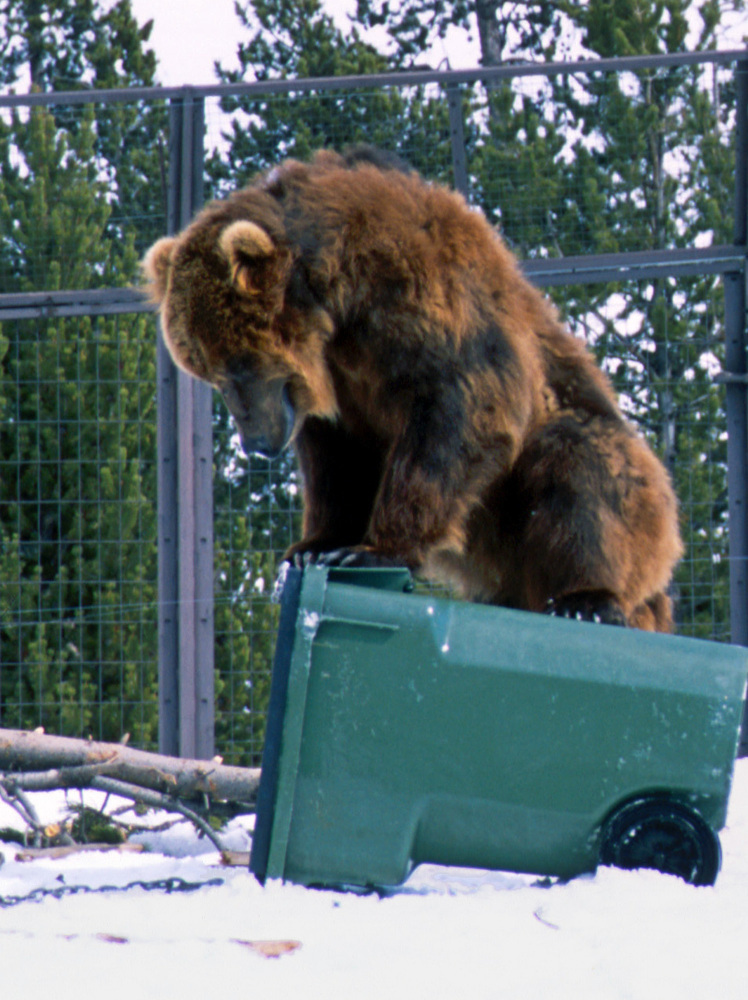 Sam, a 700-pound grizzly at the Grizzly & Wolf Discovery Center in West Yellowstone, Mont., attempts to pry open a storage container as part of a program to certify products for use in grizzly habitats.

Last summer marked an all-time high for human-bear conflicts in Yellowstone National Park. The number of grizzly bears there has tripled since they were placed on the endangered species list in the mid-1970s.

But in a strange twist, many of the bears that were involved in conflicts with humans are now helping people to not lure bears into temptation.

Grizzly bears are a way of life in the northwest corner of Wyoming.

Take Shane Trotter, for instance. He thought deer were getting into his livestock feed, until he found bear tracks.

"[The] part that scares me [is], I came out here twice Monday night, with my shotgun — [I was] going to scare the deer off," Trotter says. "I got here thinking it was a deer, so I'm glad I didn't run into anything else."

Once bears get hooked on human and livestock food, they become bold and persistent in order to get that food again. Ultimately, bears that develop this tendency have to be dealt with.

Mark Bruscino, the head of the Wyoming Game and Fish Department's Bear Management Program, says they have to be concerned about young bears in particular.

"They learn that Dumpsters and garbage cans are a good place to find food, and under the cover of darkness they will continue that behavior for life," he says.

In this video from the Bear-Resistant Products Testing Program in West Yellowstone, Mont., grizzly bears test storage containers by flipping, standing on or smashing them in an attempt to get to the food inside. Generally, bears test each product for 60 minutes; if it hasn't been broken into, it passes the test.

Wildlife managers had to euthanize or send to zoos nearly a dozen of the bears from last year's record 250 bear conflicts in and around Yellowstone.

But some bears that have been removed from the population get a chance to help prevent future conflicts, like those just over the border in Montana.

At the Grizzly & Wolf Discovery Center in West Yellowstone, Mont., visitors can see wolves, birds and bears up close, but the grizzlies they get to see also provide a service: They test bear-resistant products.

"The protocol is 60 minutes of contact time [with a product]," says Randy Gravett, the facilities manager at the center. "So the bear has to work on that container for a total of 60 minutes, and if they do not get in it, then it passes the test."

These tests are important because in a number of counties, cities and national parks, using bear-resistant products is the law. Today, Gravett's bears are testing something called a "super cooler" — a giant gray cooler about the size of a Dumpster — by filling it with dog kibble and peanut butter, and leaving it out for the grizzlies.

It doesn't take long for the bears to become interested.

Kobuk, a grizzly bear from Alaska that weighs approximately 600 pounds, is trying very hard to get into that container. Kobuk flips the giant cooler over easily, while the kibble rattles around inside.

He checks the lid and latches of the container, examines the padlocks and rubber straps that keep the lid locked down, then flips it again.

We want those containers to pass the test, because it will ultimately benefit those bears out in the wild.

After an hour, he has managed to get the lid partly open. Gravett calls time, and Animal Care Manager Dan Meates goes in to inspect the cooler.

He finds that Kobuk has ripped off the cooler's plastic seals and emptied its contents through the drain hole.

"Well, the good thing is they didn't get into the main capsule itself, so the padlocks on the end seem pretty good," Meates says. "Obviously, the rubber latching system — that did not work."

Dozens of companies offer bear-resistant Dumpsters, food containers, trash cans and just about anything else you might need bear-proofed. Gravett, the facities manager, says those types of products will help prevent future conflicts.

"Our bears have been testing for about 10 years now, and that's a good thing; and of course, we want those containers to pass the test, because it will ultimately benefit those bears out in the wild," he says.

And it will benefit people who live and play in bear country, like Yellowstone.