Accessibility links
Puerto Rican Governor Faces Opposition To Pipeline Gov. Luis Fortuno wants to build a 92-mile natural gas pipeline to help bring down energy costs. But more than two-thirds of the island's residents oppose its construction, and a majority don't believe it will lower their bills. The project has also drawn criticism in Congress. 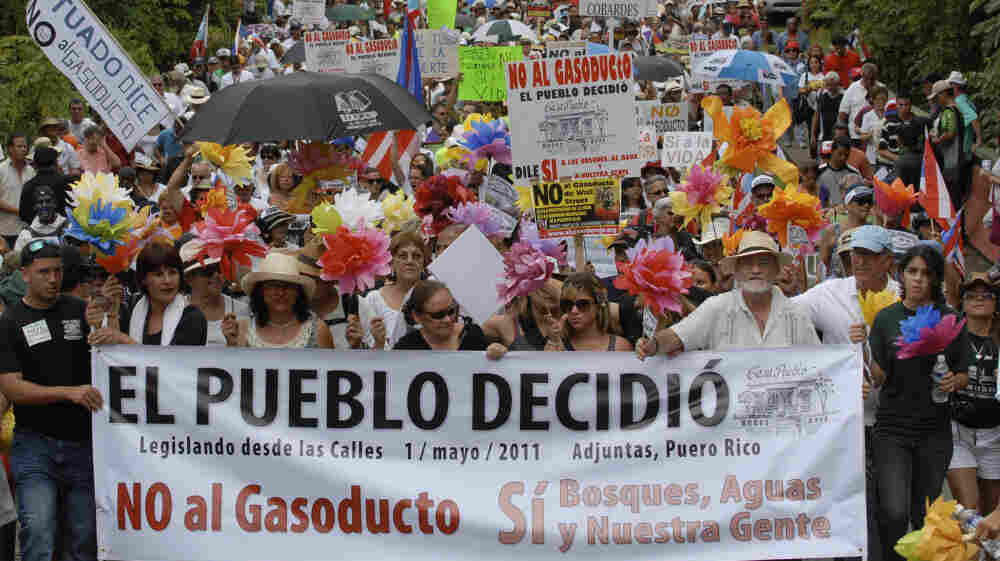 Demonstrators march during a May 1 protest against the proposed construction of a 92-mile gas pipeline in Adjuntas, Puerto Rico. Puerto Rico Gov. Luis Fortuno has made the project a central goal of his administration, despite protest from communities affected. Ricardo Alcaraz/AP hide caption

If you think your monthly electric bills are high, be thankful you don't live in Puerto Rico. An island where nearly all energy sources must be imported, the U.S. territory has residential power costs that are double those on the mainland.

To help bring down the cost of energy, Puerto Rico's governor is pushing an ambitious plan to build a 92-mile-long natural gas pipeline.

But that plan has run into significant opposition in Puerto Rico and in Congress.

Homes In The Pipeline's Path

Puerto Rico isn't a large island — it's just 110 miles long and 40 miles wide. But it can be noisy. Wherever you go, tree frogs — or coqui — provide the soundtrack, from the capital of San Juan to the island's subtropical rainforests.

At Danny Rodriguez's house in the Cordillera Mountains near the town of Adjuntas, he says the sounds are intense after a rainstorm. 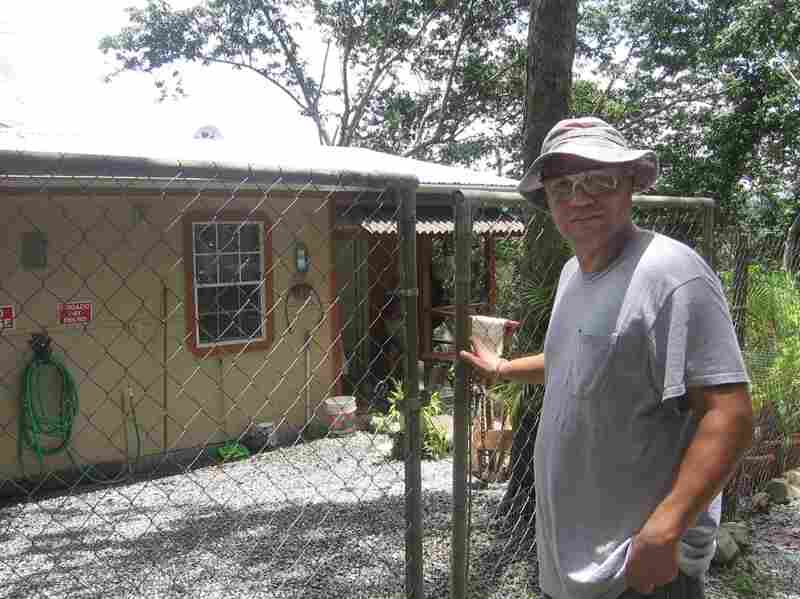 Danny Rodriguez, 38, built his home in Adjuntas, Puerto Rico. But the government wants to build a natural gas pipeline through his property. He's concerned about the risk of living next to a pipeline in a seismically active area. Marisa Penaloza/NPR hide caption 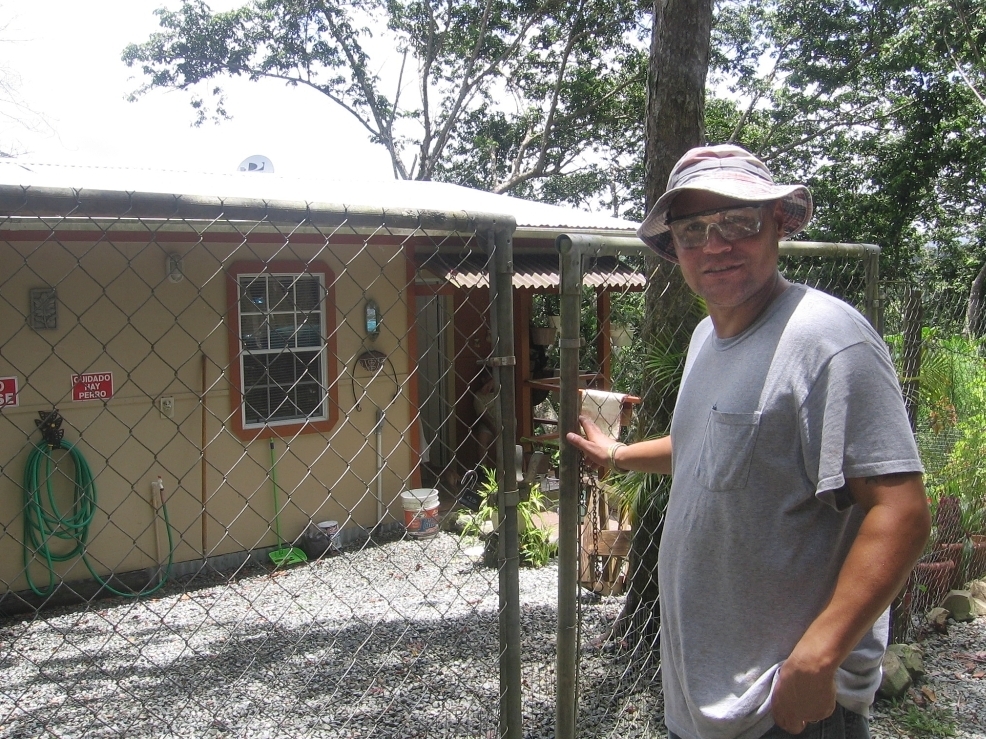 Danny Rodriguez, 38, built his home in Adjuntas, Puerto Rico. But the government wants to build a natural gas pipeline through his property. He's concerned about the risk of living next to a pipeline in a seismically active area.

"You're going to hear like an orchestra of wildlife at night, even birds, little frogs," he says. "And if you're like in a spiritual state of mind, you can relax and you can forget about everything that's bothering you."

What's bothering Rodriguez now is the government's plan to bring a natural gas pipeline right through his property. He lives there with his wife and children in a house he built himself.

"No machinery. It was all hand-done," he says. "The reason why I didn't want to do machinery is, first, I couldn't afford it. Second, I wanted to keep the land as virgin as possible because, as you see, bananas grow wild here."

Representatives of the government-owned energy company Prepa have been by several times recently, offering to buy Rodriguez's house. It's on land owned by his father, Luis Rodriguez, who lives just next-door.

Both father and son worry that the pipeline will ruin the rainforest. They're also concerned about safety — the risk of living next to a pipeline in a seismically active area.

They've told Prepa they won't sell. But the elder Rodriguez says what they want doesn't seem to matter.

Big money is right. Hundreds of millions of dollars are at stake — both in energy savings the government says it would bring to the island, and in the contracts that are already being awarded for the pipeline's design and construction.

The government has dubbed the pipeline Via Verde, or "Green Way," and for months has been running TV and radio ads to build support for the project. But that public relations campaign has been less than successful. A poll conducted earlier this year by a Puerto Rican newspaper found more than two-thirds on the island oppose its construction and a majority don't believe it will lower their electric bills.

This happens in the 50 states. I simply don't get it.

To the man behind the project, Puerto Rican Gov. Luis Fortuno, all of this opposition to a pipeline is a bit baffling.

Some of the opposition has to do with politics.

Shortly after taking office, Fortuno canceled another natural gas pipeline along Puerto Rico's southern coast proposed by the previous administration. Several months later, he unveiled his own, more ambitious pipeline project that — as with the earlier one — would shift the island's power plants away from oil to natural gas.

Fortuno says that could save Puerto Rico's residents and businesses a billion dollars a year.

"It's cleaner. Carbon emissions will go down by 64 percent. It's safer than oil. And I believe that we need to diversify our energy resources and this is a way of doing it," he says.

A Threat To Ecology?

Back in the Cordillera Mountains in the town of Adjuntas, Arturo Massol has emerged as one of the pipeline's leading opponents. Massol is a professor at the University of Puerto Rico and a leader of Casa Pueblo, an activist group founded more than 30 years ago to fight plans for silver and copper mining in the area.

Massol says the pipeline poses a similar threat to the area's forests and rivers. 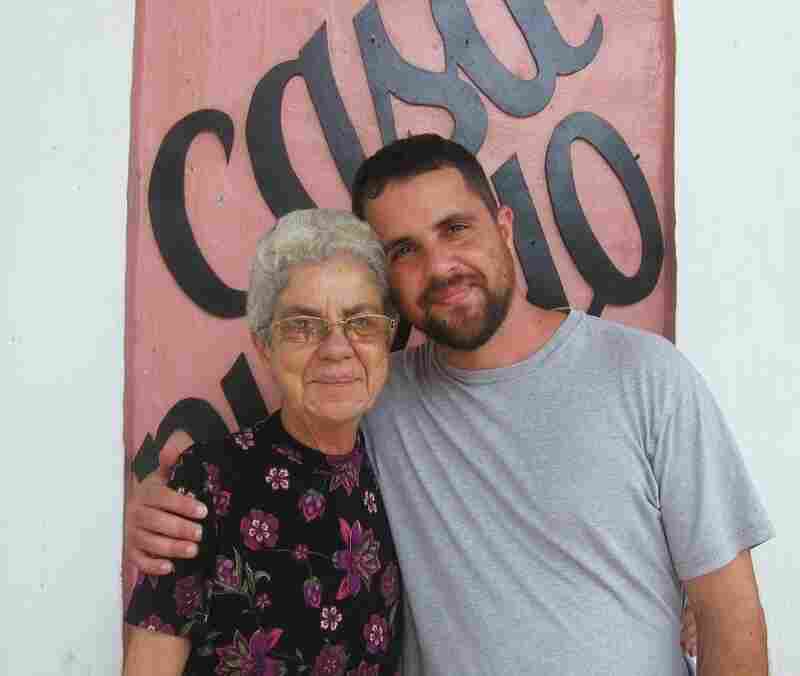 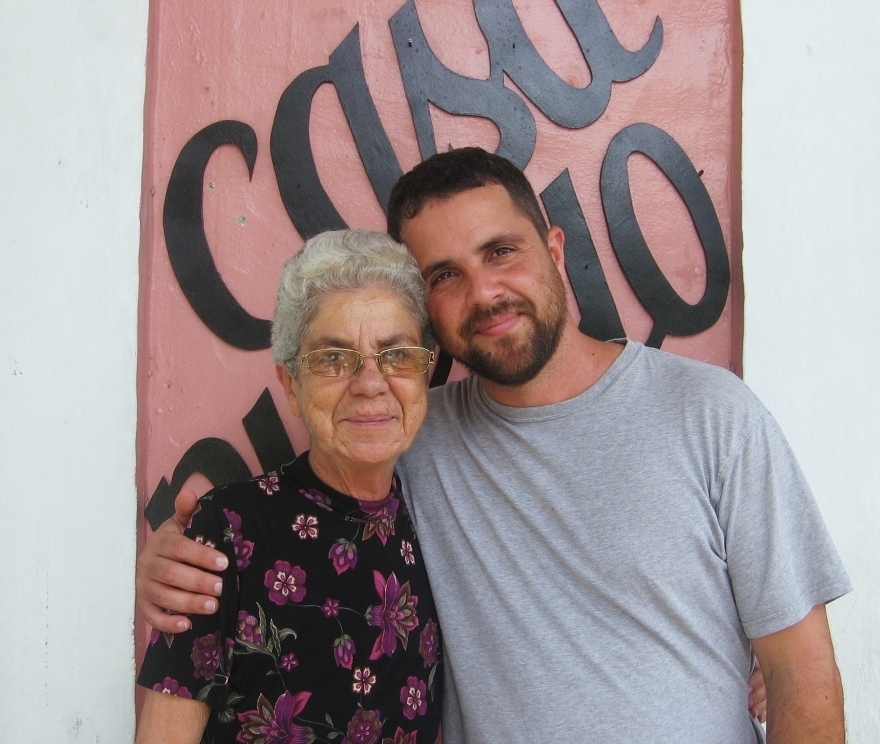 Arturo Massol and his mother Tinti, 70, started Casa Pueblo about 30 years ago to fight silver and copper mining in Adjuntas.

"It will run through at least 235 rivers. It will go through 30 habitats of endangered species. We're talking about major deforestation in the most important watershed of the island. Damages — we're talking about permanent damages to critical ecological services," he says.

Plans call for a 150-foot right of way to be cleared through the forests that cover Puerto Rico's mountainous interior. In some areas, helicopters would be used to fly in pipeline segments and other equipment.

Gov. Fortuno says he expects the impact on the environment to be minimal. Of all the possible routes, he believes this is the best one available.

For Fortuno, there's a lot riding on this pipeline. It's the centerpiece of his administration's efforts to kick-start Puerto Rico's dormant economy.

When he announced the nearly half-billion project, Fortuno also declared an "energy emergency." The high cost of energy, he said, had made immediate action necessary. He attempted to put the project on a fast track that could have it in operation by September 2012 — perhaps not coincidentally, just before he runs for re-election.

'There Is No Transparency'

But the project has become a lightning rod, attracting criticism from political opponents, Puerto Rican media and in Congress.

Building public skepticism of the project, one of the first multimillion-dollar design contracts was awarded to a close Fortuno friend — a contractor with no pipeline experience.

"This is the problem. There is no transparency," says U.S. Rep. Luis Gutierrez (D-IL). He's the son of Puerto Rican parents and has a home on the island and visits often. He has taken a personal interest in the Puerto Rican pipeline. 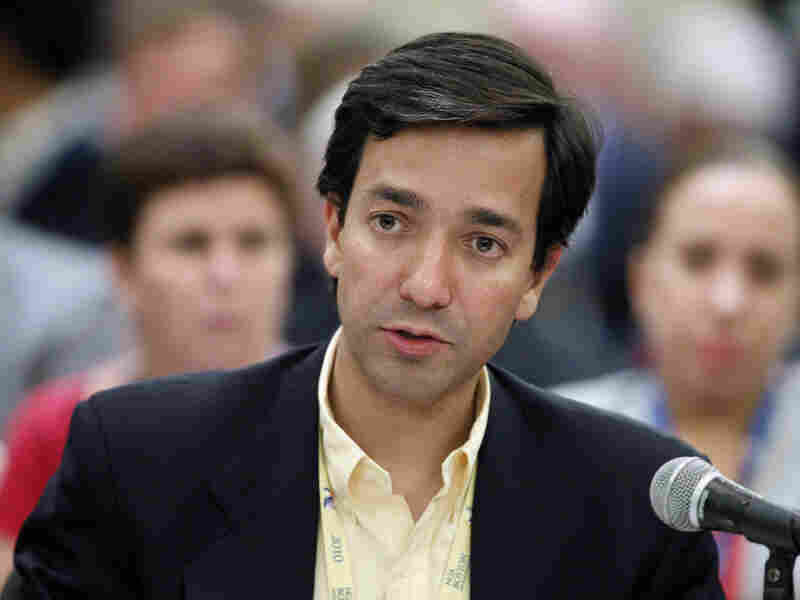 Gov. Luis Fortuno speaks at the annual meeting of the National Governors Association in July about the pipeline he wants to build in Puerto Rico. Michael Dwyer/AP hide caption

Fortuno also has linked his New Progressive Party closely with the Republican Party on the mainland, adopting tough policies on labor unions and government spending that have made him something of a rising star in the GOP.

Gutierrez, a Democrat, has pressured officials with the EPA and the Army Corps of Engineers to closely scrutinize Fortuno's pipeline project, and his efforts appear to have borne fruit.

Corps approval is necessary before construction can begin. The Corps is now working with other federal agencies to conduct its own assessment of the pipeline's environmental impact.

In Puerto Rico, officials with the government power company remain hopeful they can still meet the original timeline and begin construction next month. The project manager for the pipeline, Francisco Lopez, says his staff has met repeatedly with the Corps and answered all of their questions.

"My opinion is that they have all the information they need to make a determination this month," Lopez says. "And we are waiting for that."

An official with the Corps says Lopez is overly optimistic. A report won't be done this month, and when the draft environmental assessment is released, there will be a 30-day comment period and possibly public hearings before it becomes final.

For the governor, the delay is not good news. The pipeline has become a campaign issue — and increasingly it appears to be one that is not likely to help him win re-election.