Accessibility links
Iranian Exile Group Wants Off Terrorist List Supporters of the Mujahedeen-e Khalq see it as a potentially useful group in countering Iran. Others see it as a dangerous cult, saying support for the MEK could undercut peaceful democracy activists in Iran. 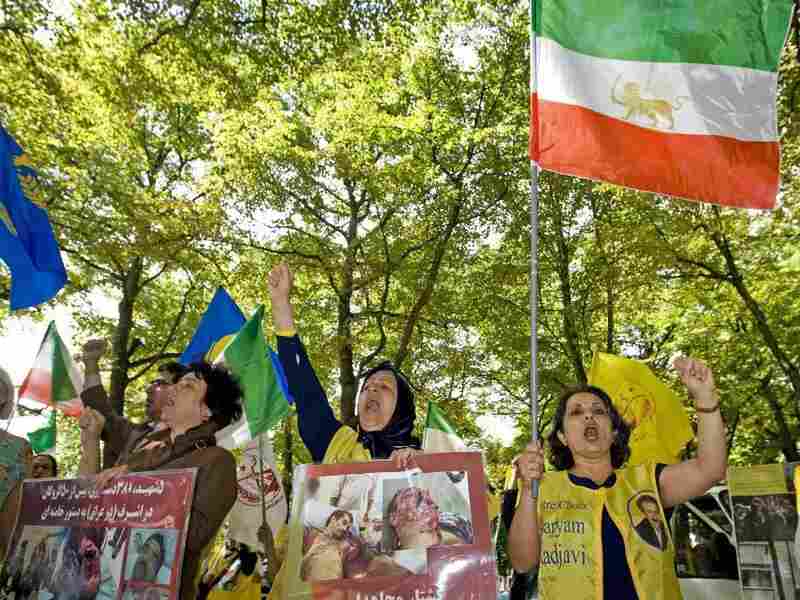 Supporters of the Mujahedeen-e Khalq, an Iranian exile group, demonstrate in front of the U.S. Embassy in The Hague, Netherlands, on Aug. 4, 2009. The U.S. State Department is reviewing the group's status on the Foreign Terrorist Organization list. Valerie Kuypers/AFP/Getty Images hide caption 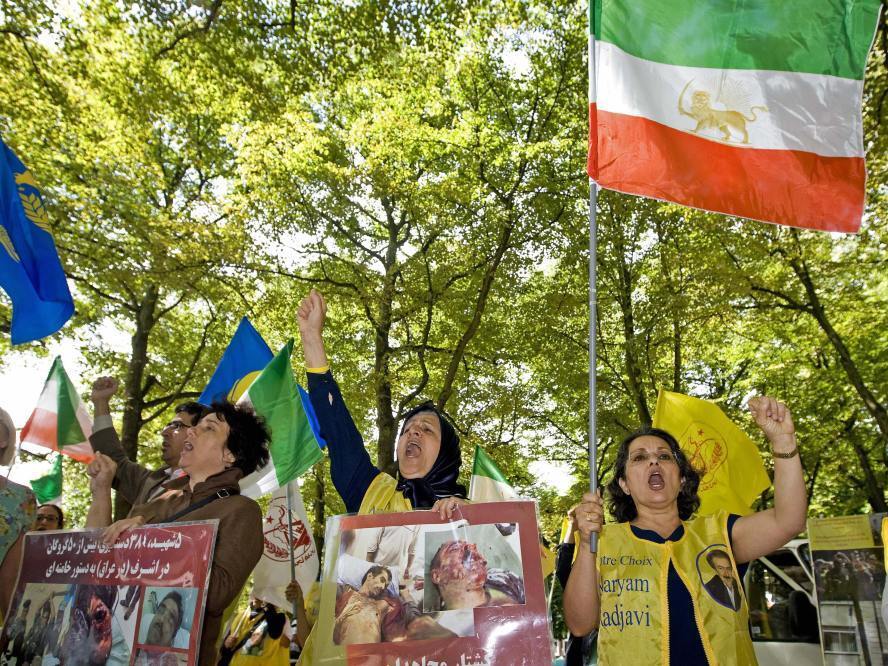 Supporters of the Mujahedeen-e Khalq, an Iranian exile group, demonstrate in front of the U.S. Embassy in The Hague, Netherlands, on Aug. 4, 2009. The U.S. State Department is reviewing the group's status on the Foreign Terrorist Organization list.

An Iranian exile group is ramping up its lobbying campaign to get off a U.S. terrorist list, and the issue has sparked a fierce debate among foreign policy experts about the wisdom of such a move.

Supporters of the Mujahedeen-e Khalq see it as a potentially useful group in countering Iran. It has provided the U.S. information about Iran's nuclear program, for instance. Others see it as a dangerous cult and warn that taking it off the Foreign Terrorist Organization list would undercut peaceful Iranian dissidents, who want nothing to do with the MEK.

Despite sanctions against it, the MEK has managed to enlist members of Congress and some high-profile former U.S. officials to press its case.

The U.S. State Department is under court order to review the MEK's status, and officials say that review is continuing.

The group's supporters, meanwhile, often stand vigil outside the State Department. At one such event this week, MEK supporter Farah Salehi, a software engineer from Berkeley, Calif., said that the group should never have been on the terrorist list in the first place.

"The MEK designation was a wrong designation that was made in 1997 as a goodwill gesture to the Iranian government," Salehi says.

She calls this an urgent matter because thousands of MEK members live in Iraq in a place called Camp Ashraf. Iraqi Prime Minister Nouri al-Maliki wants them out, though Camp Ashraf residents fear there are few places they could safely go. If they returned to Iran, the MEK says its members would be jailed, or worse.

"Maliki is using this label as an excuse or justification that these are terrorist people and they don't need to be protected and it's OK to go ahead and massacre them," Salehi says.

"They are unarmed. And 47 of them over a two-year period were mowed down by Maliki's people. And I don't think the United States should be permitting those kinds of human-rights abuses," Dean said in a recent interview with NPR's Talk of the Nation.

Dean and other former officials have accepted large speaker fees from groups linked to the MEK.

But he insists, "This is not a scary group of people. And in the past, who knows what they did. But the fact of the matter is they're not a terrorist group."

The U.S. government has linked the MEK to the killing of several American military officials and civilians who were in Iran in the 1970s. But the group says it renounced violence long ago.

Robert Hunter, a retired ambassador now with the National Defense University, says the residents of Camp Ashraf ought to be protected. But, he adds, "getting into bed with these people, I think, would be a profound mistake."

Hunter describes the MEK as a Marxist cult, whose members have learned the ways of Western public relations.

"This organization is not a friend of the United States and it never has been. Even though their tactics have changed, they now smile sweetly on us and others, their basic strategy and leadership has not changed at all," Hunter says.

If the U.S. takes the MEK off the terrorism list, Hunter worries that this would send the wrong message to Iranians seeking more democracy. He says the MEK is hated by many Iranians because it was once a tool of Iraqi leader Saddam Hussein during and after the Iran-Iraq war of the 1980s.

Others feel that taking the group off the list would put more pressure on the Iranian government.

Kenneth Katzman, an analyst with the Congressional Research Service, says Iran watchers have been debating the ramifications of such a move and there are two sides of the argument.

He points out, though, "the Foreign Terrorist Organization list is supposed to really be decided on the technical question of, is the group a terrorist group or not."

And that is the only question the State Department is supposed to decide.