Accessibility links
More Americans Hungry For Food Stamps Although the economy has been growing since mid-2009, the pace has been too slow to absorb the nearly 14 million people without jobs. Today, 46 million Americans receive the federal government's help when buying food, which is roughly 15 percent of the population. 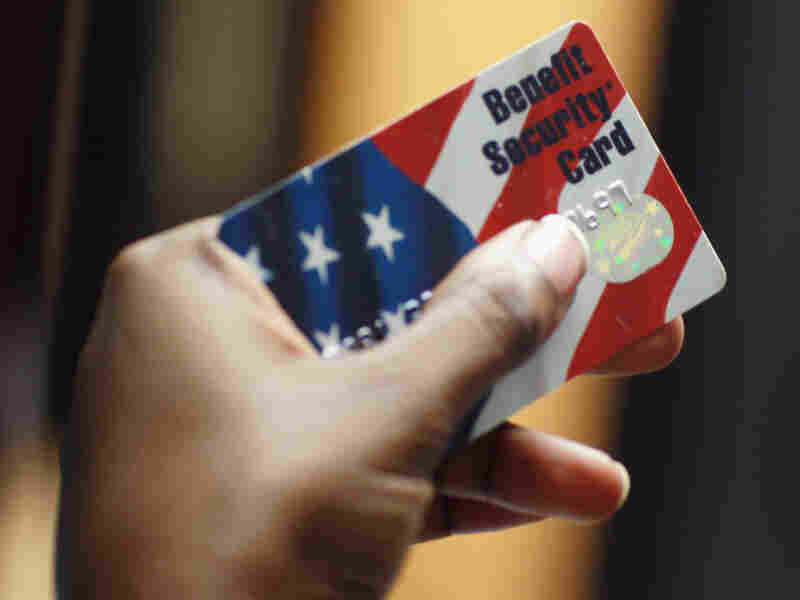 About 46 million people get government help in the form of food stamps when buying food. That's roughly 15 percent of the population. Joe Raedle/Getty Images hide caption 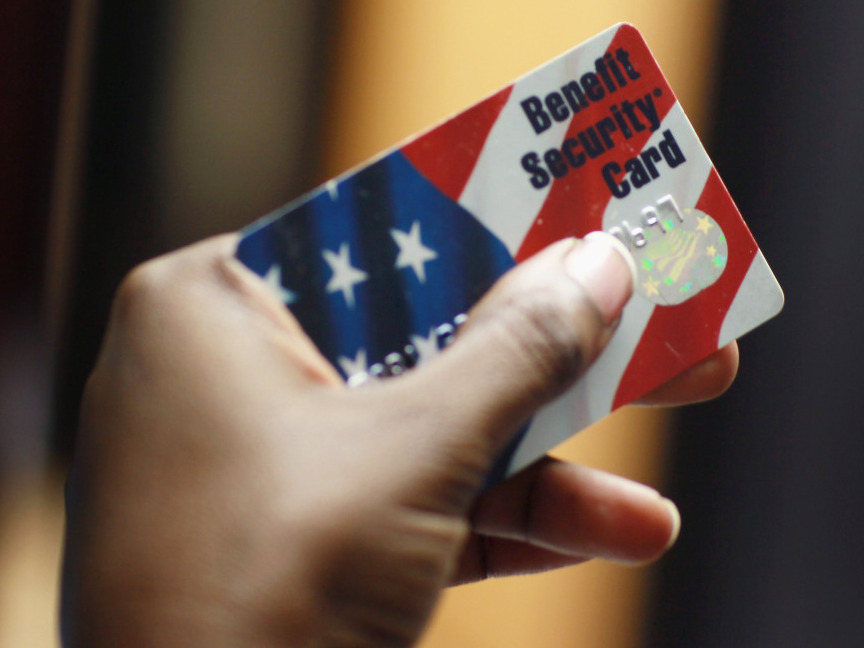 About 46 million people get government help in the form of food stamps when buying food. That's roughly 15 percent of the population.

This week, the U.S. Department of Agriculture is expected to release its latest update on the food stamp program. It's an important indicator of the nation's economic health — and the prognosis is not good.

Food stamp use is up 70 percent over the past four years and that trend is expected to continue.

The spike began in late-2008 and early-2009 when the worst of the recession was triggering massive layoffs and home foreclosures. Although the economy has been growing since mid-2009, the pace has been too slow to absorb the nearly 14 million people without jobs. Nearly half of those have been out of work more than six months.

As a result, the number of people seeking federal help with groceries has been soaring. At this time four years ago, before the recession hit, about 27 million people were using food stamps. Today 46 million get help through the Supplemental Nutrition Assistance Program — what most people call food stamps — which is roughly 15 percent of the population.

The combination of rising prices and stagnant wages have contributed to the need for food stamps; about 40 percent of food stamp recipients live in households where a family member is earning a wage.

But the government's latest inflation report shows that the cost of living increased 3.6 percent in the past year while wages have barely budged. So a lot of working people need food stamps to close the gap between their low wages and high grocery bills.

The problem is likely to get worse. A number of factors — spring floods, summer droughts and soaring global appetites — have contributed to push up corn prices by about 70 percent since last August. Corn goes into many food products as well as livestock feed, so it appears likely retail food prices will continue to rise more quickly than wages or jobs in coming months.

Whether the food stamp program can keep pace with demand is unclear because the program is very expensive for taxpayers — about $68 billion last year.

For recipients, it's not particularly generous. The maximum for a family of four is $668 a month, which works out to about $42 per person per week. If each person were to eat three meals a day, that's about $2 for each meal. But the collective cost of all those meals is significant at a time when Congress is looking to cut spending.

FY 2011 data are preliminary; all data are subject to revision.

Federal support for food stamps was boosted in early 2009 as part of the federal stimulus package. But that extra spending will expire in 2013, and extending the extra funding beyond that date would be controversial.

Helping Families And The Economy

Some economists say the program is worth every penny because it stimulates the retail sector. There's no dispute that many grocery stores would see a huge drop in business if their customers couldn't afford food.

For example, in Alabama, about one-third of the residents purchase their food with government help.

Economists say federal aid for food allows families to spend more on gasoline to drive a family member to work or purchase coats for their children, and that all helps expand the economy.

But other economists, as well as many conservative candidates and lawmakers, say food stamps dampen incentives to find work or even plant a garden.

And there's the question of fraud. About one-third of the people who qualify for aid don't reach out to get it and a number of other people try to scam the system.

Plus, many taxpayers simply object to having money taken from their paychecks to put food on someone else's table.