Accessibility links
Walter Reed: Where Generations Of Wounded Soldiers Healed And Moved On The last doctors and patients are leaving Walter Reed Army Medical Center, which is closing after more than 100 years of reshaping military medicine. For patients like Lt. Tyson Quink, the historic hospital in Washington, D.C., is where he's rebuilding his body, and his life. 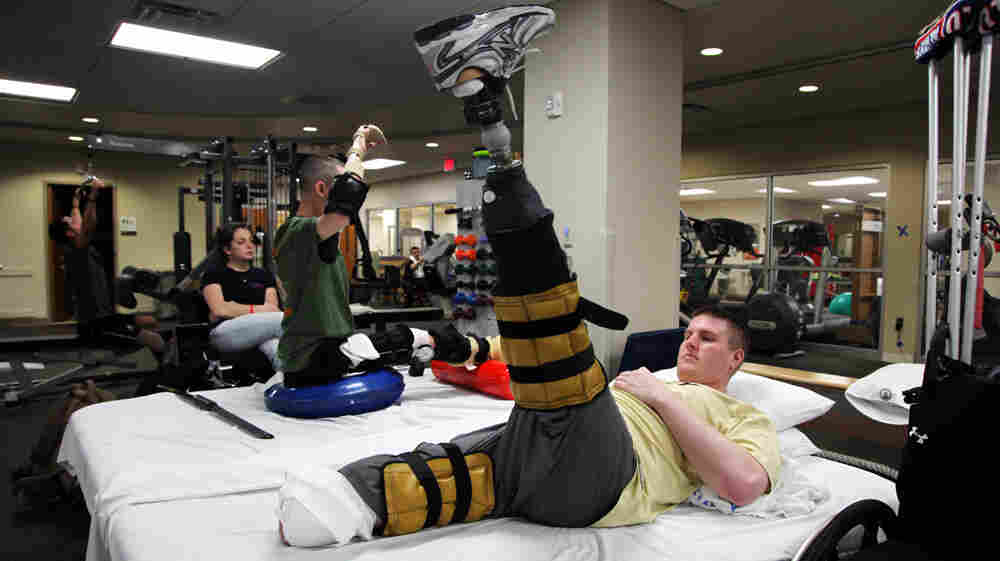 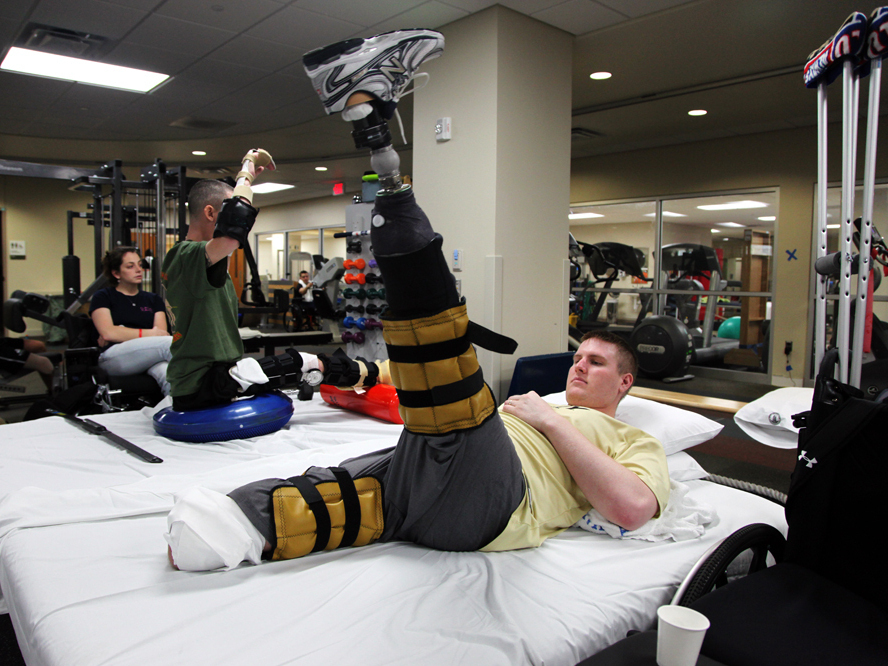 Tyson Quink exercises at the National Naval Medical Center in Bethesda, Md. Quink, a former college football player, lost both of his legs three months into his deployment to Afghanistan.

On a recent morning, John Pierce walked across the sprawling hospital campus of the Walter Reed Army Medical Center. On the lawn, he spotted people who have come to define the place in recent years. 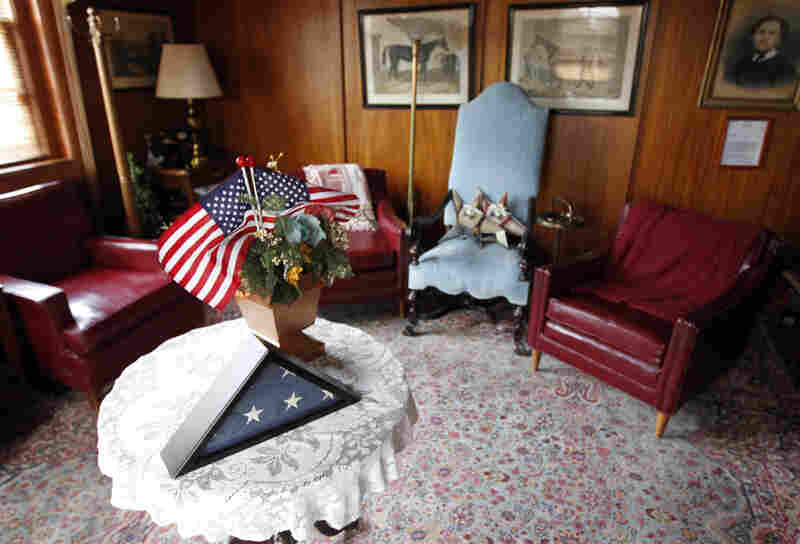 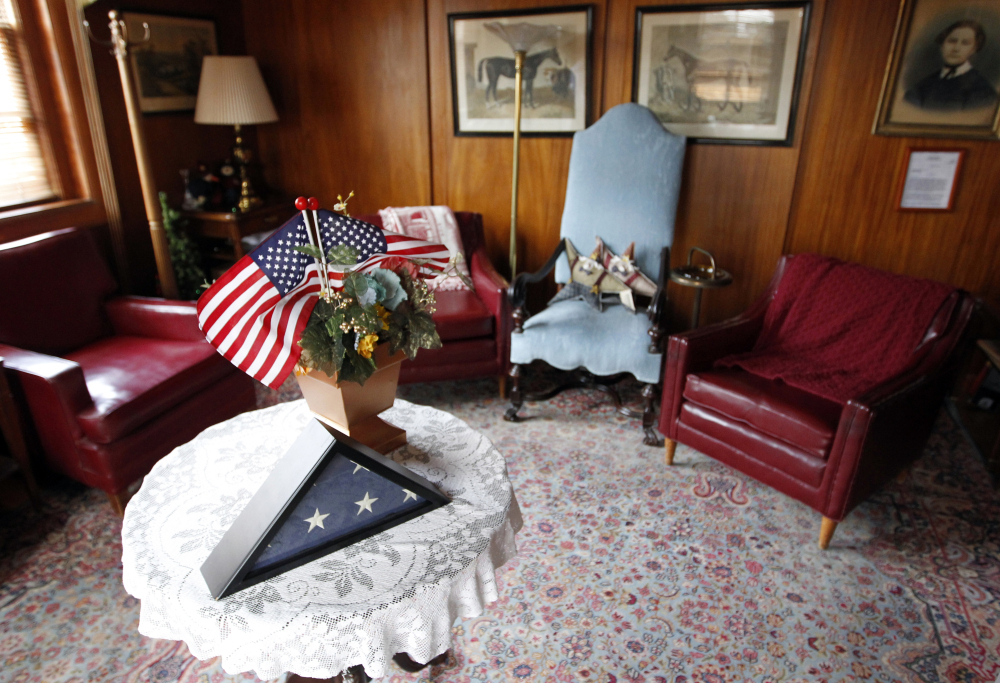 "[They were] having physical fitness-type tests," Pierce said. "There were people with notebooks and things, like they record when you do your sit-ups and pushups — but these were a number of double amputees."

Pierce is the historian for the Walter Reed Society, which makes him an expert on the historic American hospital in Washington, D.C.

The last doctors and patients are leaving, as the center closes. They're moving elsewhere as part of a round of base closures — a huge development for the U.S. military.

Walking into Walter Reed's old hospital building feels like going back in time, as the building changes from concrete and glass to brick and radiators.

Atop one fireplace in the hospital sits a bust of an Army doctor, Maj. Walter Reed. In 1898, during the Spanish-American War, Reed served as a troubleshooter for the surgeon general.

Reed led an investigation into typhoid — which killed more soldiers than bullets did during the war. Many young soldiers were dying before they even reached the battlefield.

Reed concluded that fewer people would catch typhoid if Army camps had better hygiene and sanitation. He saved even more lives when he performed experiments proving that mosquitoes spread yellow fever.

An episode of The Big Picture, a TV series produced by the Army from the 1950s to the 1970s, looked at medical advances made at Walter Reed, and the rehabilitation of Korean War veterans.

Since it opened in 1909, the hospital named for Reed has had many famous patients.

One wood-paneled room is named for Gen. John J. Pershing, the American commander in World War I. The Pershing Suite is not your ordinary hospital room: The seats include leather armchairs, including one with a plush, high back.

Pershing lived out his last years on the campus, close to his doctors.

Several presidents also received medical treatment at Walter Reed. So as a historian, it's frustrating to Pierce that as the hospital closes, many Americans know it mainly for a scandal.

In 2007, patients suffered from bad housing and tangled bureaucracy.

That means more mutilated survivors have come to Walter Reed, to a room where we met Col. Gregory Gadson.

"[This room is called] MATC. It's an abbreviation: the Military Advanced Training Center," said Gadson, who runs a program for wounded soldiers. "I like to call it the Gold's Gym of guys that are missing things."

There, men who have lost arms and legs work out on exercise machines. Gadson knows their experience because in 2007, he was struck by a roadside bomb in Iraq.

"When I arrived here at Walter Reed, I still had both of my legs," Gadson said. "They were in very poor condition. And ultimately, one week after I was here, they had to take my left leg to save my life."

Then he decided to let the doctors take his right leg, which was never likely to heal. He has since learned to walk on artificial legs and bionic knees.

The MATC room is in its last days of operation.

"It's obviously got a sentimental place for me because this place, and these doctors more importantly, and the medical staff here saved my life," Gadson said.

"A lot of times, when people think of a wounded soldier or service member, they just think of that individual," Gadson explained. "But you know, really, that whole family's wounded. That's a lifestyle change for the whole family."

A Couple Working Together

The people undergoing therapy include an Army first lieutenant, Tyson Quink, and his wife, Tera. Tyson, a platoon leader, lost both of his legs below the knee to a bomb in Afghanistan. 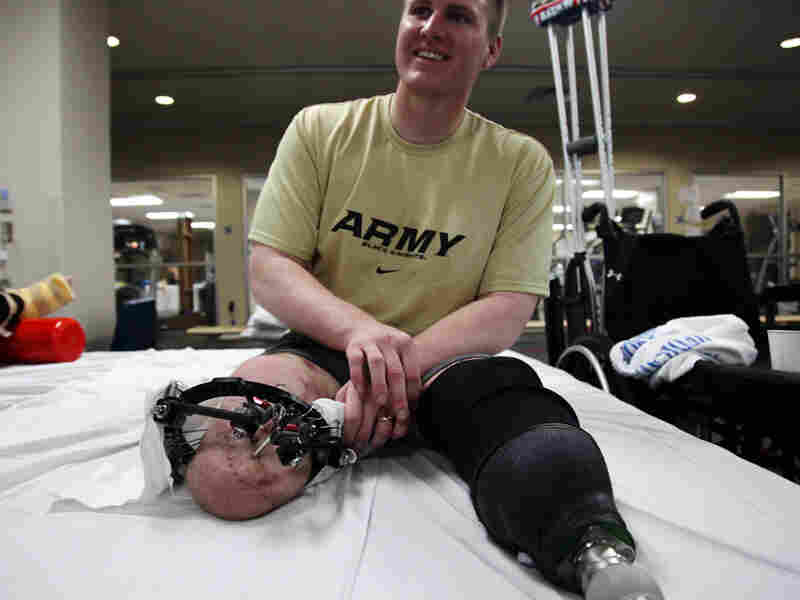 Tyson Quink smiles while examining his knee. "Doesn't it look like a catfish?" he said. Quink is waiting for a bad burn to heal before he can be fitted for his second prosthetic. Becky Lettenberger/NPR hide caption 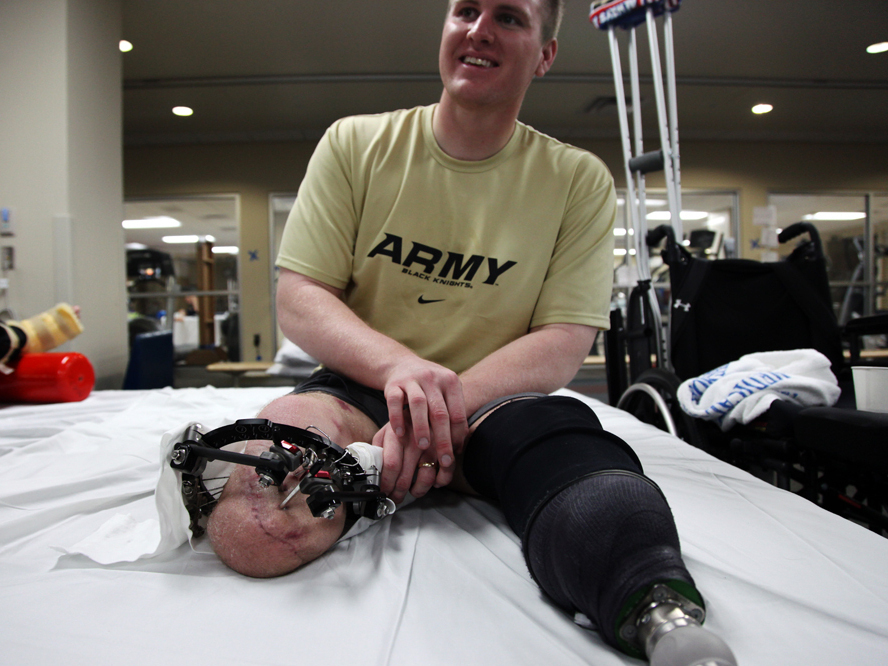 Tyson Quink smiles while examining his knee. "Doesn't it look like a catfish?" he said. Quink is waiting for a bad burn to heal before he can be fitted for his second prosthetic.

That was in June. Now, Tyson has had one silvery artificial calf and foot attached, which he uses to pedal an exercise machine.

"It's a hard thing to adjust to at first. You're so used to having it," he said. "I was 6-foot-3, and getting cut down to like 5-foot-something, having to look up to people from a chair, is not something I'm used to."

Quink said he's waiting for his right lower leg to heal enough that doctors can fit him with a second artificial leg.

He's strong enough that he can work the exercise machine while talking — with two hands and one foot — without getting out of breath.

"It's real humbling being here, too, because you see people who have multiple amputations, more than you, or, you know, have the same — missing their legs, but ... way higher," he said. "And you see how much more difficult it is for them in their day-to-day life."

It makes him feel lucky, he says, to have only lost both legs below the knee.

Quink was once a football player at West Point — which is where he met his wife, Tera, who is also a lieutenant. She's been living with him at the hospital, guiding him through a blizzard of therapy sessions and doctor's appointments.

"The blast caused a mild TBI — which is a traumatic brain injury," Tera said. "It's basically a really good hit that you probably would have gotten from football. But his short-term memory's not all there, so I just kind of go to make sure that he remembers everything, and I'm there to support him."

When Tera sometimes has to remind him of a recent event, "I'm like, 'That did not happen!' " Tyson laughed. "But it's ... I just give in, because I know I don't know for sure. And being on drugs, and having 14 or 15 surgeries, you don't remember everything."

After Walter Reed, Moving On

Before his injury, Tyson Quink said, he didn't imagine he would have a long career in the Army. He wanted to have his own command, and then get out. He said he wanted to have a simple life.

"Maybe be a teacher and coach some high school football, and live with my dog and my wife, and have some kids," he said.

But even with his injury, he said, "There's a lot of options."

As the Walter Reed Army Medical Center closes, the Quinks will be moving to a separate facility in Maryland. They're among the very last of the thousands of American troops who've been treated at this hospital center for a century.

They are working to reconstruct their lives, and to follow in the footsteps of a U.S. Marine who's been at the center longer — and who stopped by to share a laugh.

The Marine also lost both legs below the knee. He wears athletic shoes on his new metal feet.

He stood, unaided. And as he talked to the Quinks, he flexed his knees and bounced in the air, three times.