Accessibility links
Cleanup Begins In Irene's Deadly Wake The death toll from the storm rose to 35 as residents of mid-Atlantic and Northeast states began assessing the damage wrought by the destructive storm. Millions were still without power, and torrential floodwaters threatened towns in Vermont and elsewhere.

The remnants of Hurricane Irene moved north Monday into Canada, leaving behind a path of destruction after raking the mid-Atlantic and northeast, where residents faced damaging floods triggered by hours of torrential rains.

While Irene's maximum wind speed might not compare with other legendary hurricanes, the storm had tremendous reach. A couple of days after it beat up on North Carolina, it still had enough strength to pummel Vermont and other parts of New England.

Many of the worst effects arose from rains that fell inland, not the highly anticipated storm surge along the coasts. Residents of Pennsylvania and New Jersey nervously watched waters rise in rivers and creeks. Normally narrow ribbons of water turned into raging torrents in Vermont and upstate New York late Sunday, tumbling with tree limbs, cars and parts of bridges.

The National Oceanic and Atmospheric Administration reported that some areas received as much as 15 inches of rain in just a few hours. 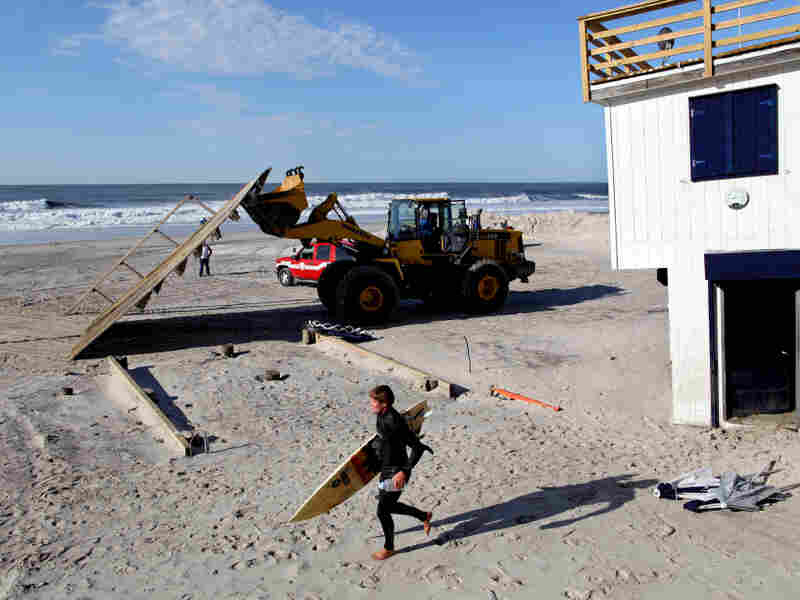 A surfer in Long Beach, N.Y., passes heavy machinery Monday that was removing the remnants of a lifeguard shack that was knocked off its footing during Irene. Craig Ruttle/AP hide caption 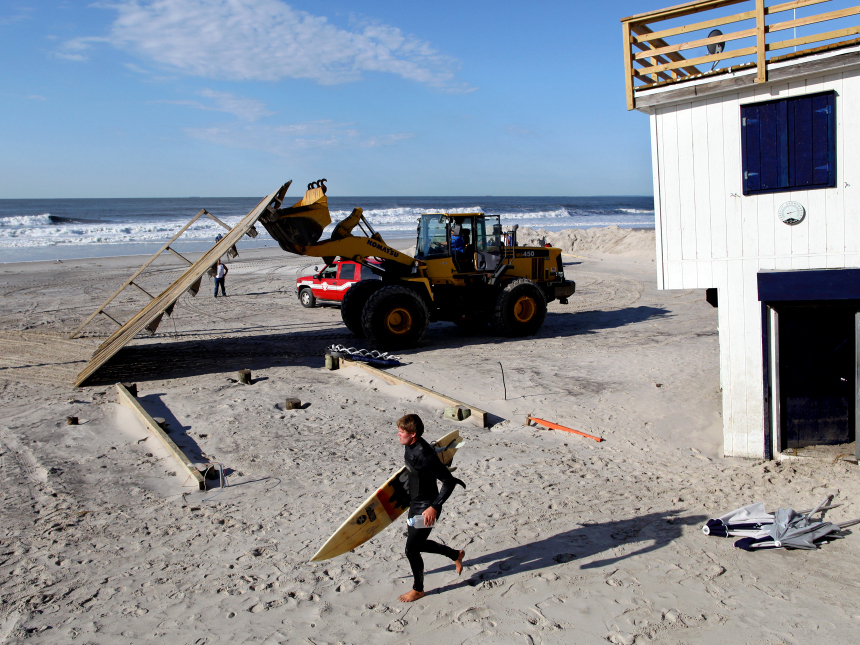 A surfer in Long Beach, N.Y., passes heavy machinery Monday that was removing the remnants of a lifeguard shack that was knocked off its footing during Irene.

Hundreds of Vermonters were told to leave their homes after Irene dumped several inches of rain on the landlocked state. Video posted on Facebook showed a 141-year-old covered bridge in Rockingham swept away by the roiling, muddy Williams River. In another video, an empty car somersaulted down a river in Bennington.

Federal Emergency Management Agency chief Craig Fugate said Vermont was "very much in search and rescue mode" after the unexpected flooding. During a conference call with journalists Monday, he said FEMA was prepared to support the governor should a disaster declaration be declared.

"There was concern about flash flooding, but nothing of this magnitude," said Vermont Public Radio's Ross Sneyd. "People were shocked when the water started to rise so quickly. ... It was just overwhelming for residents and officials alike."

Green Mountain Power decided against flooding Montpelier, the capital, to save the earthen Marshfield Dam, about 20 miles up the Winooski River to the northeast. Water levels had stabilized Monday morning but engineers were continuing to monitor the situation, said spokeswoman Dorothy Schnure.

At least 35 people have died from the storm in the U.S., most of them when trees crashed through roofs or onto cars. In an early estimate, consulting firm Kinetic Analysis Corp. figured total losses from the storm at $7 billion, with insured losses of $2 billion to $3 billion.

Department of Homeland Security Secretary Janet Napolitano cautioned that it's important that people not let down their guard even though the storm has passed.

"We're not out of the woods yet," Napolitano said. "Irene remains a large and potentially dangerous storm. Hazards persist in communities that have already seen the storm pass."

Millions of people were in the same situation Monday along the Eastern Seaboard. Lights started to come back on for many, and it was expected to take days for electricity to be fully restored. Airlines were forced to cancel about 9,000 flights.

New Yorkers feared a commuting nightmare as their transit system, shut down ahead of the storm, was slowly restored. 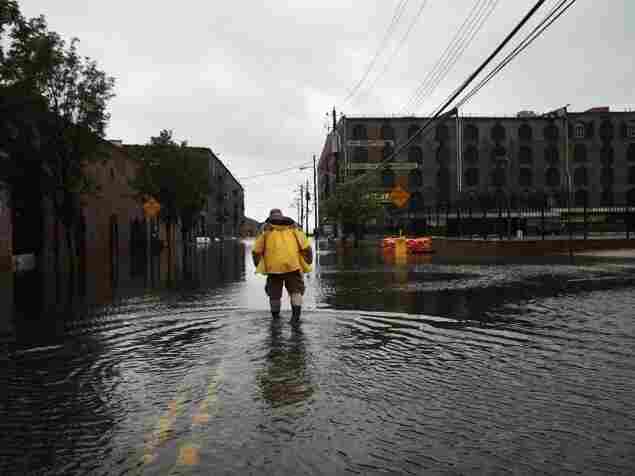 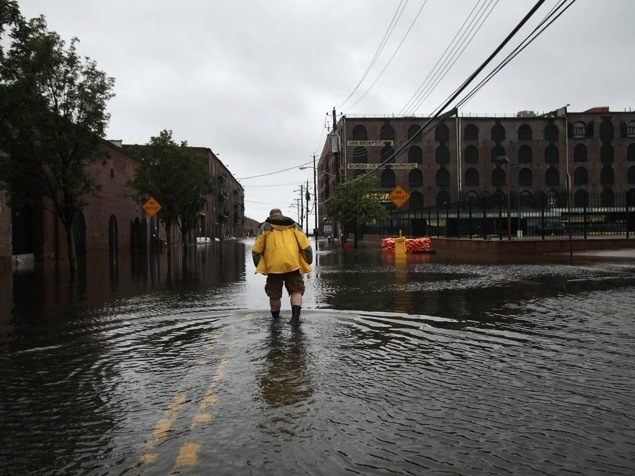 Water sits on the streets of Brooklyn's Red Hook neighborhood on Sunday.

NPR's Joel Rose said Monday morning that traffic seemed to be running fairly smoothly, but that the worst problems were due to shutdowns of commuter rail systems — the Long Island Railroad, Metro North and the New Jersey Transit system.

New York City had ordered 370,000 people to evacuate low-lying areas, but in the end, damage to the city was light.

Mayor Michael Bloomberg defended his decision to order the evacuation, saying it was impossible to know just how powerful the storm would be.

"We were just unwilling to risk the life of a single New Yorker," he said.

Airports in New York and around the Northeast were reopening to a backlog of hundreds of thousands of passengers from the flights that were canceled over the weekend.

New Yorker Ray Marshal said he waited out the storm in a local bar and was not impressed. "It was like a little rain storm. I think it was blown out of proportion," Marshal said.

But others were equally surprised by Irene's power. In Rhode Island, where power was cut off to as many as half the state's residents, Bill Derrig of Warwick stood looking out at the surf that pounded a beach on Narragansett Bay.

"I didn't understand how powerful this would be. I've got plywood that's been ripped off my house that I thought I'd screwed down pretty well. I wasn't really prepared," he said.

The entire town of Ocean City, Md., was evacuated in advance of Irene because the barrier island is so vulnerable to wind and storm surge. But city manager Dennis Dare said he was able to reopen the boardwalk to tourists by Sunday afternoon.

"Thankfully, the storm deteriorated to the point that it spared Ocean City any major damage. And we've been able to quickly restore the town and open it up for the great weather coming up," he said.

But in other coastal areas, memories of this storm won't go away so quickly. In eastern North Carolina, where the storm first made landfall, Irene's winds caused serious damage. The storm cut Hatteras Island on the Outer Banks in two, much as Hurricane Isabel did in 2003. That leaves roughly 2,500 residents marooned on the island.

North Carolina Gov. Beverly Perdue says she'll be asking for federal help to repair that road. "I have all reason to believe we'll get whatever help we can get," she said.

Residents along the New Jersey Shore had expected the worst from Hurricane Irene. Many there boarded up windows and put sandbags around front doors, but the area mostly was spared.

Irene came ashore just north of Atlantic City. About 10 miles away in Margate City, Leah Sinderbrand was surprised to find no damage after the storm.

"We have a huge tree in the back yard, and I kept visualizing it crashing through my bedroom. But look, nothing's wrong."

Chris Fogarty, director of the Canadian Hurricane Centre, warned of flooding and wind damage in eastern Canada and said the heaviest rainfall was expected in Quebec, where about 250,000 homes were without power.