Accessibility links
Foreign Policy: Give Optimism And Credit To Libya Pundits and politicians around the world have voiced concern about Libya's readiness to develop a new, safe government. James Traub of Foreign Policy understands the grounds for concern but wants to set the record straight on exactly how long Libya has been preparing for its freedom. 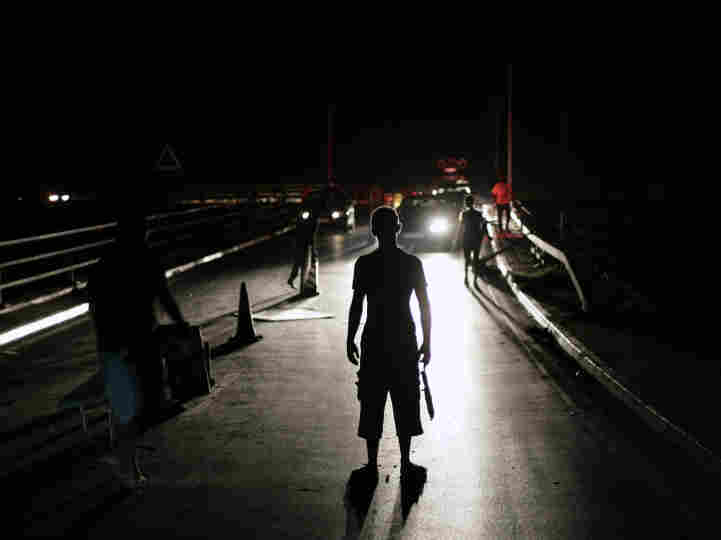 A Libyan rebel mans a checkpoint in Tripoli, Libya, early Sunday, Aug. 28, 2011. Libyan rebels on Sunday rejected an offer by Moammar Gadhafi to negotiate and said they have captured the eastern town of Bin Jawwad, forcing regime loyalists to flee after days of fighting. AP hide caption 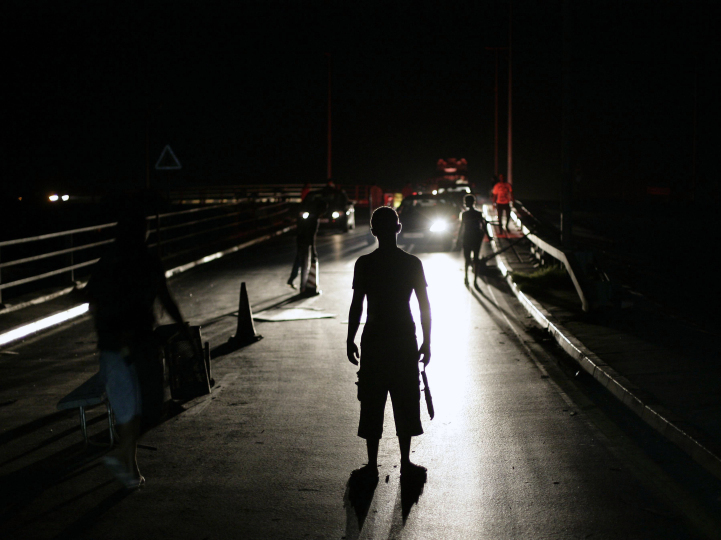 A Libyan rebel mans a checkpoint in Tripoli, Libya, early Sunday, Aug. 28, 2011. Libyan rebels on Sunday rejected an offer by Moammar Gadhafi to negotiate and said they have captured the eastern town of Bin Jawwad, forcing regime loyalists to flee after days of fighting.

James Traub is a contributing writer for the New York Times Magazine and a fellow of the Center on International Cooperation.

At this moment of spectacular triumph in Tripoli, even the fiercest advocates of the NATO intervention that helped topple Moammar Gadhafi have been sounding notes of trepidation and sober caution; nobody wants to get caught out being unduly optimistic. Advocates of intervention endured a terrible chastening in Iraq and Afghanistan. It's now obvious, if it wasn't before, that in post-conflict situations, things are much likelier to go wrong than right. And Libya is arguably more fraught than any of its recent predecessors.

Allow me, in what I'm sure is a spirit of a priori hopefulness, to offer some tiny grounds for optimism. For the last several months, I have been following the deliberations of the Tripoli Task Force. This body was established in April by the Transitional National Council (TNC), the rebel government based in Benghazi, in order to plan for the post-Gadhafi transition. One of the peculiar advantages of the military stalemate that lasted until this past weekend is that it gave the task force ample time to plan for Day One of the new government.

Over time, the group's core members moved from Benghazi to Dubai. By the time the Gadhafi regime fell, about 70 people were engaged full time in the task of planning. This group oversaw a network of hundreds of Libyans, mostly professionals, divided into 17 teams responsible for policing, water supply, fuel, schools and the like. They made a point of studying precedent. According to Sohail Nakhoody, who served as chief of staff to Aref Ali Nayed, a Libyan businessman who headed the task force (and now serves as the new government's ambassador to the United Arab Emirates), "We had in front of us the experience of Afghanistan, Iraq, Kosovo, Somalia." Iraq served as a kind of anti-template, especially on questions like how to treat regime elements — i.e., no "de-Baathification."

Let me pause for a moment to recall the absurdity of the George W. Bush administration's own planning process for Day One of a post-Saddam Iraq. Back in the summer of 2002, the U.S. State Department established the Future of Iraq Project, a study exercise that brought Iraqi exiles together with American academic experts and government officials. But once Defense Secretary Donald Rumsfeld persuaded Bush to transfer control of postwar Iraq to the Defense Department, the entire effort was scrapped. In The Assassins' Gate, journalist George Packer describes meeting an Iraqi-American lawyer in Baghdad desperately trying to interest the new authorities in the State Department's 250-page report on transitional justice, and finding no takers. The planning process was transferred to a group of retired military officers heading something called the Office of Reconstruction and Humanitarian Assistance (ORHA), whose very name denoted the strict limits of its mandate. Security was outside ORHA's mandate; so were politics and governance. Those things were supposed to take care of themselves. As we know now, they didn't.

The Tripoli Task Force is staffed by Libyans, with a Libyan sense of reality. The goal, says Nakhoody, is to "secure the conditions for normal life and for democratic processes to happen." In recent weeks, the planning was expanded in order to produce a post-conflict plan for the whole country. Nakhoody says that task force members considered a series of disaster scenarios, especially after Russian diplomats passed along information that Gadhafi planned to devastate Tripoli. Fire brigades were organized, and a three-to-four-month supply of oil was stored in tankers in secure staging areas. These may still, of course, prove necessary. Nakhoody says that in recent days, task force members forged a "unified military command structure" among police brigades. He concedes, however, that it's not clear to what extent police commanders in Tripoli continued to fight alongside Gadhafi's troops and, thus, to what extent their loyalty can be counted on.

How real is all this? Nayed, whom I reached just as he was boarding a flight from Tunis to Tripoli, says that "stabilization teams are already on the ground" in Tripoli and elsewhere and have already managed to increase the supply of electricity and water, partially restore Internet service and use text messaging to communicate with citizens, including pleas to avoid revenge killing. "Things are on the mend," he says confidently. I asked a senior U.S. official deeply involved with Libya policy whether he thought this was so, and he said, "I'm getting a sense that some of the plan is being executed; I can't tell you what [the] percentage is."

The failure to deliver security and services in Baghdad doomed the American effort there. Even modest success in Tripoli and elsewhere would do a great deal to bolster the legitimacy of the NTC, which, according to the terms of a draft constitution, is to serve until a permanent constitution can be written and approved by referendum, and a new government elected, 15 to 20 months from today. Nayed says that what the new government needs from the West is money to pay salaries, purchase medicine and supplies and restore the prostrate economy. NTC officials say that they do not want a peacekeeping force, whether from the United Nations or elsewhere, and insist that they can master the security situation on their own. That may prove naive. Gadhafi and his sons are still at large and may fight a rear-guard battle, as Saddam did. What's more, if rival forces refuse to put down their guns or if the ragtag militias prove unable to secure Gadhafi's weapons depots, the new regime may have to call on an outside force.

But the most important lesson of Baghdad is: It's the politics, stupid. A government that is not seen as legitimate will not be able to establish security. And this raises the most fundamental question: How can the Benghazi-based and European-backed NTC persuade Berbers, Islamists, southern tribesmen and Gadhafi loyalists from the west that it is the government of all Libyans? After all, the very idea of "legitimate government" is foreign to Libya. The U.S. official I spoke to told me the obligation to be inclusive had been "taken seriously" by the NTC and gave the body credit for incorporating elements from Misrata and other major coastal cities, as well as from the mountain regions — though not, as far as he could tell, from the remote south. David Rolfes, an official with the National Democratic Institute and a veteran of post-conflict settings in the Balkans and elsewhere, says that when he first traveled to Benghazi in April he was deeply skeptical about the rebels' political leadership, but that he wound up feeling "amazingly impressed at how they conducted themselves" and has only felt more so over time.

The political leaders say the right things; but, like the Tripoli Task Force, they've operated in a vacuum until now. No one can confidently predict what will happen in the vortex of post-Gadhafi Libya. Another lesson from Iraq is: Dictators poison their countries. They work their way into people's most intimate selves, into the ability to trust, to accept setbacks without violence, to be patient. Gadhafi spent 42 years playing Libyans against one another. And so even if, miraculously, everything goes according to plan, Libya will be a chaotic mess, and at times the Libyan people will wonder whether all the terrible bloodshed was worth it. Many Iraqis, after all, learned that life without Saddam could be even more terrifying than life with him.

I trust that I have now inoculated myself sufficiently against the charge of naive optimism. And so I can allow myself to say that the Libyan uprising has at times felt as deeply moving, as morally powerful, as the Spanish Civil War. But in this case, the heroes won.