Accessibility links
Irene Is Gone, But Disruptions Remain Irene's sweep up the East Coast caused millions to lose power this past weekend — many of whom may not have it restored for days. And although most mass transit systems are up and running again, long-distance travelers aren't so lucky: They're stranded at airports and rail stations across the region. 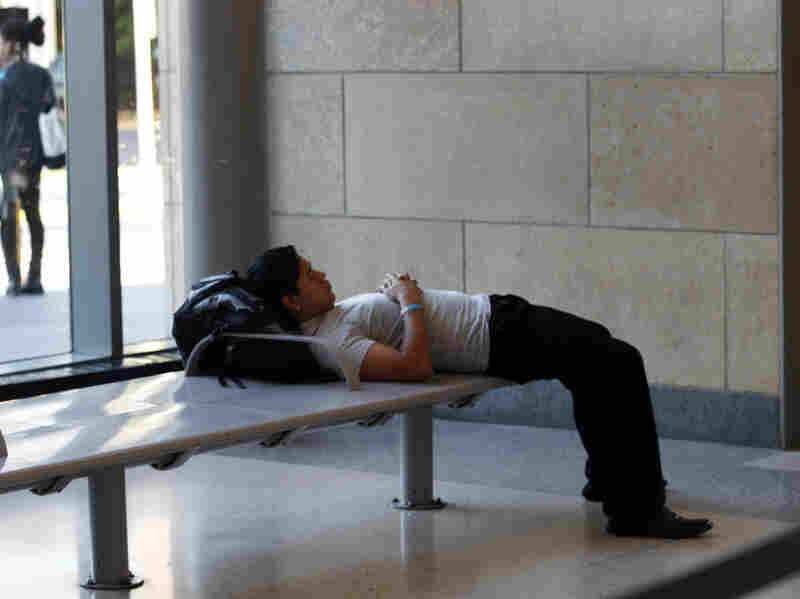 A man rests at the Trenton, N.J., train station on Monday, where some commuters were caught off guard when they found there were no trains. Damage from Hurricane Irene forced New Jersey Transit to suspend rail service. Mel Evans/AP hide caption 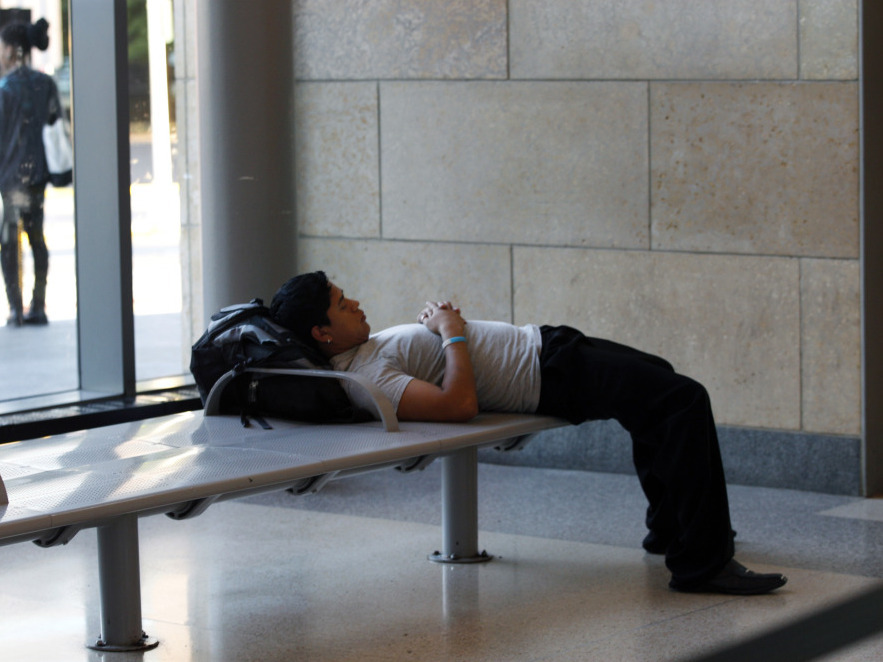 A man rests at the Trenton, N.J., train station on Monday, where some commuters were caught off guard when they found there were no trains. Damage from Hurricane Irene forced New Jersey Transit to suspend rail service.

Hurricane Irene knocked out power to millions and threatened transportation systems up and down the East Coast. The restoration of most subway and bus lines in New York City helped avoid the commuting nightmare that some had feared, but the storm will leave many without power for days.

Irene caused havoc for many rail lines, forcing crews to face a maze of downed trees and branches on the tracks before restoring power to some lines.

And New York City took an unprecedented step before Irene hit, shutting down bus and subway lines over the weekend. Tunnels did not flood and the system was able to restore service this morning.

At Manhattan's Port Authority Bus terminal, commuters like Al Yudes said his bus ride from Weehawken, N.J., was a breeze, in part because many could not make it to work.

"People are staying home; people a little bit farther out, they do have some flooding, there's trees down, and so they're just not taking the chance — and everybody's got a computer," he said.

We still had extensive damage in the Outer Banks and in the Hampton Roads/Tidewater area. But it was equally as bad — when you look at number of customers without power — in the central part of Virginia.

But long-distance travelers weren't as lucky and continued to face delays. Airlines had to unsnarl the mess created when they rescheduled thousands of flights over the weekend: Some offered waivers so passengers would not have to pay re-booking fees.

Amtrak also temporarily shut down service over the weekend, and riders are still experiencing delays.

Rail passengers at Washington, D.C.'s Union Station said they could get little information about when Amtrak might return to normal service, which meant Susan Rothschild, who is from New York City, was stuck.

"I was supposed to be on the 1:02 train, so if that train was going to New York that would have been just fine. But it's only going to Philadelphia, so I'm going to have to find my way home from Philadelphia," she said. "There are people out there with real problems and this to me is not a really huge problem."

Amtrak had to cancel all train service between Boston and Philadelphia, including all high-speed Acela lines.

But the lasting pain from this storm will be felt by the millions of people who are still without power. Dominion Resources says half of its 2.4 million customers in Virginia and North Carolina lost power. David Botkins of Dominion Resources says the map of those outages is a little surprising, adding that some of the worst damage was quite a ways inland where heavy winds brought trees down onto power lines.

"We still had extensive damage in the Outer Banks and in the Hampton Roads/Tidewater area. But it was equally as bad — when you look at the number of customers without power — in the central part of Virginia," Botkins says.

He says it's the worst damage since Hurricane Isabel eight years ago, but that storm did much more serious damage — snapping power poles, which took a long time to replace.

Irene's damage was less severe, and so Dominion Resources says it has already restored power to many of those who lost it.

Another unexpected center for outages was Baltimore, where the local utility reported nearly half a million people without power. Up in Connecticut, Gov. Dannell Malloy said that 600,000 people in his state were without power.

"We have never had as many people out of power as we have had as a result of this storm," he says.

Thousands of utility workers are coming in from out of state, thanks to aid agreements in place for just this kind of situation. Still, many utilities say that some customers may have to wait until next weekend for relief.

Edward Castro lives in Bristol, R.I., and hopes he doesn't have to wait that long.

"But we've got plenty of candles, and we've got flashlights and batteries so we're OK with that," he says. "As long as the water stays on, and the gas, we're doing OK."

One bright spot may be the nation's communications systems. The Federal Communications Commission reports that most of them held up well and that all 911 services worked, despite the heavy demand.