Accessibility links
Walter Reed's Closure May Be A Boon To D.C. Washington is poised to take over a large chunk of valuable land after the Walter Reed Army Medical Center closes. There are many proposals for how to use it — from dog parks to retail space. But none of the ideas is likely to happen anytime soon. 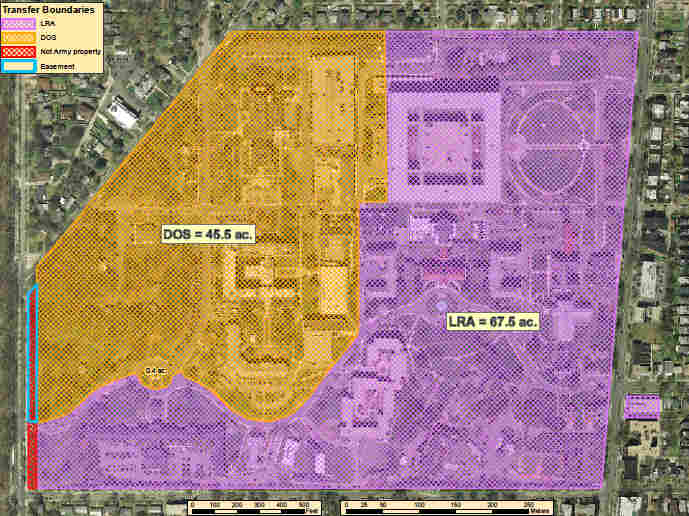 This satellite image shows how the Walter Reed Campus will be divided between the District of Columbia (purple) and the State Department (yellow). The District's 67-acre portion includes both the old and new hospital buildings. D.C. Planning and Economic Development Office hide caption 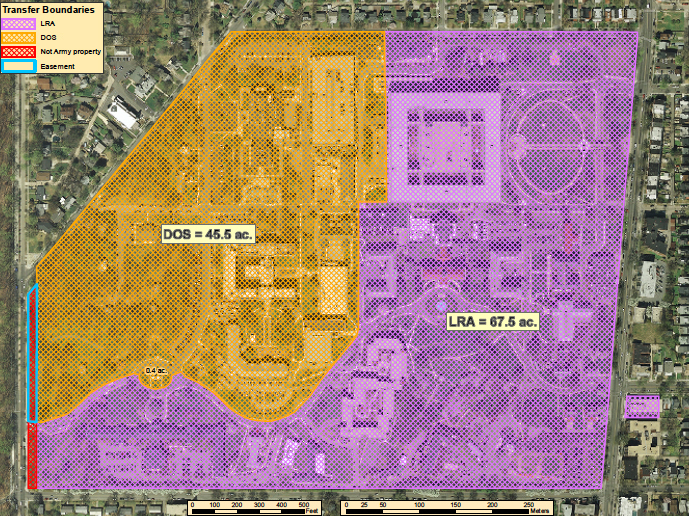 This satellite image shows how the Walter Reed Campus will be divided between the District of Columbia (purple) and the State Department (yellow). The District's 67-acre portion includes both the old and new hospital buildings.

The Walter Reed Army Medical Center has a storied past. It has been the country's leading Army hospital for more than 100 years, sitting on a complex that includes a Civil War battlefield. There was a time when 16,000 patients a year sought treatment for wounds of war or illness.

By the end of August, all of the patients and doctors will have left, moved to Bethesda and Fort Belvoir as the Army consolidates its bases. But as one era closes, another opens: Washington, D.C., may be left with nearly 70 acres of prime real estate.

Just after the midday rush at Ledo's Pizza on Georgia Avenue in Northwest D.C., Tim and Kelly Shuy sit down at a table.

Their pizzeria is across the street from the sprawling Walter Reed campus. Lush with trees and a hilly landscape, the campus includes several iconic 100-year-old buildings with red tile roofs where patients, their families and staff were able to wander and just look out on the rest of the neighborhood from a distance.

Many in the neighborhood call the medical center a fortress. But for the Shuys, it was a mainstay. Doctors and patients alike have supported their business for years.

"Some of them come in uniforms. We have patients who come in who haven't been out of Walter Reed," Kelly says. "I've had dozens of people tell me this is their first meal out of the hospital."

But those days are just about over.

Of course the Shuys are losing more than just familiar faces.

"As far as the business goes, obviously it's a huge hit for us," Kelly says.

As Walter Reed closes down, it leaves behind questions. What is going to take its place? There is no shortage of opinion among interested residents:

"We are looking for quality space for our students," says Christine Encinas.

"We'd like to use part of it to develop affordable family housing," says Troy Swanda.

"We'd like to see a bit of parkland right along here," says Ellen McBarnett. "Many of the neighbors have been talking about dog-walk parks or places for children to play."

And that's just the beginning. The State Department will take a chunk of Walter Reed's 113 acres, possibly for embassies. But that leaves almost 70 acres for D.C. In a city where a quarter of the land is owned by the federal government, demand for land is high.

"This is a uniquely vocal community, let me just put it that way," says Victor Hoskins, deputy mayor of Planning and Economic Development. He co-chairs the committee that is going to figure out just what the District of Columbia is going to do with all of this land.

"Actually, the interest we've gotten from a number of retailers already has been, really, quite astounding. What's going to happen is when that fence comes down [and] we develop the retail along there, it will become a place to go," Hoskins says. "And there's a chance now to revive a Main Street, which is Georgia Avenue, which has for years been suffering from decay."

D.C.'s government has a major interest, as well. For 100 years, this property has been federal and untaxable. The city estimates it could get $20 million a year in tax revenue.

And the people who worked at Walter Reed mostly drove in and drove out, not spending as much in the neighborhood as destination consumers might. Plus, if retail takes off, it might supply local jobs.

Of course, that's assuming the city gets it right.

Coming Up With A Plan

Faith Wheeler is a neighborhood representative who lives near Walter Reed. Standing about a mile away from the hospital, she points to a block where new development didn't work out so well.

"Well, I don't want to see all those for-lease signs; look at that," she says. "If that happened on Georgia Avenue's Walter Reed campus, it would be awful, horrible. According to textbook ideas, this is the place where retail ought to be booming. It's not."

This is what Wheeler does not want to see: a street that's a commuter corridor, lined by sterile and vacant office buildings. One thing she does want is some sort of tribute to the place's history. And that is likely; many of the historic building facades will be kept. But Wheeler's voice is one of many.

Public Meetings, And Many Rules

"It's kind of the new realities of urban planning in the 21st century," says Lisa Benton-Short, a professor of geography at George Washington University who has written about previous base closings. She says the Walter Reed campus will take awhile to sort out.

"I think for much of the 20th century, planners were quite top-down in their planning," she says. "They told us what we needed in our spaces. Sometimes they were right, and sometimes they weren't. In the last 25 years or so, the planning profession has really changed. And one of the most important ways it's changed is to bring in public participation and planning."

That means public workshops, public forums and many public meetings. Benton-Short says it will be messy. And the military has its rules, as well.

That only heightens the fear of area businesses who will have to wait that long.

There's also radioactive waste from X-ray machines and cancer treatments that needs cleaning up. And there's asbestos to be removed. That's all possible — but it will take time. It's also one reason that the amount D.C. will have to pay the Army for the land hasn't been nailed down yet.

But when all is said and done, one thing everyone agrees on is that the site holds real potential.

"This is something that I hope will be a positive," says Ethelbert Dawson, 77, who attended Walter Reed's official closing ceremony last month. He lives around the corner, and for 25 years, he worked at Walter Reed as a research chemist.

"When I was here, I never thought that this day would ever come. We used to call it Walter Wonderful, because that's what it was."

He says he can't really predict what this new space will mean for Washington, D.C.

"But for Walter Reed and all of the positiveness that hospital has given this community," Dawson says, "I don't know if they can ever reduplicate that."

All eyes are on this space, to see whether the disappearance of a 100-year-old place of healing will usher in an urban rebirth — or leave a scar.