Accessibility links
When (Dead) Writers Tweet: The Art of Concise Imitation A new trend on Twitter finds users impersonating their favorite authors. Is the imitation art or simply mockery?

When (Dead) Writers Tweet: The Art of Concise Imitation

When (Dead) Writers Tweet: The Art of Concise Imitation 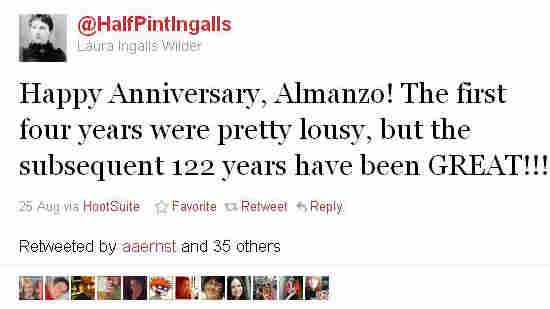 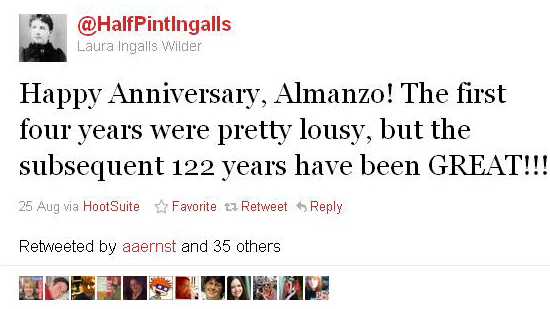 Twitter may seem like an annoying, hyperactive, self-important and cursory way to communicate, but you have to admit, it's addictive. And lately, it has become far more than a way to share your favorite VMA performance with 500 people at once (for the record: Beyonce baby bump!). Through Twitter, users have fomented revolutions, rallied around political candidates and broken news. Artists are also using the short format to express themselves: comedians use it as a wit stream, poets experiment with short verse and so on. But perhaps the most compelling use of Twitter comes from the performance artists — those users who take on new identities under the guise of an @ handle.

Among the new Twitter performers, the most popular seem to be those who have adopted the identities of famous authors, both living and dead. There is no pretense of reality in these imitations — it is a game, an inside joke — and people are really getting into it. Imitation is the sincerest form of flattery, after all, and who better to flatter via the written word than one's favorite writers? It only makes sense that Twitter, with its text-based delivery formula, would become fertile ground for literary mockingbirds.

One of the first (and most popular) of the faux-author accounts to pop up, out of the hundreds that exist now, was @halfpintingalls, the "authentic" feed of Laura Ingalls Wilder. The user's bio read, "I was born in 1867 in a log cabin in the Big Woods of Wisconsin." Her tweets tapped into a deep nostalgia that members of the Twitter generation could easily relate to (many read the Little House books obsessively as children). She tweeted irreverently about prairie life, with updates like, "Curling your bangs with a slate pencil works pretty well. Giving yourself a pedicure with a spinning wheel? Not so much." and "Anyone know how to pry loose a hoopskirt stuck in a privy doorway?! Asking for a friend."

HalfPintIngalls turned out to be the alter ego of Wendy McClure, whose book about Wilder, The Wilder Life, came out in April of this year. For McClure, playing Wilder was both book research and marketing scheme.

"It started for the same reason I have done anything on the Internet, which is just to amuse myself," said McClure when we caught up with her about her Twitter exploits. "HalfPint was a precursor to my book project, and it later became a testing ground for the kind of irreverence that Little House fans would put up with — turns out they all have a great sense of humor."

McClure says that she did not begin the account with subversive performance in mind. "I wouldn't go so far as to say it is art," she says. "It was just interesting to me. And I couldn't help but think that looking at the differences between the way we live now and the way they lived then, that you just have to do something absurd juxtaposed with modern technology."

@HalfPintIngalls did not lead McClure directly to her book deal (as several Twitter accounts have done for others, like @sh*tmydadsays), but she recognized the value of it when she was able to write The Wilder Life. "I didn't want to turn HalfPint into advertising for the book, but working on Twitter really helped me while I was writing to gauge the way people responded to her."

McClure is unique in that she is tweeting as Wilder at least semi-professionally, but most of the 140 character impersonators are not working with any kind of commercial imperative. They are simply trying to break down writers' iconic styles into 140 characters as a labor of love or comedy, often playing with the novelty of pairing an author's style with the technology of the modern age.

For almost every author you can think of, someone is out there working a fake Twitter feed. It has become a club of obsession, a contest of one-upmanship based on insider knowledge of an author's tone, personal life, and historial era. The best accounts, like that of Samuel Johnson are successful research projects as well as gags.

What do you think? Are we entering a new age of literary knowledge and scholarship, played out one tweet at a time? Or are you sick of all the fake accounts trading on the reputation of great longform writers? Tell us what you think of this new trend.