Accessibility links
Bananas: The Uncertain Future Of A Favorite Fruit Americans consume more bananas than apples and oranges combined. Dan Koeppel, author of Banana: The Fate of the Fruit That Changed the World, gives us a primer on the expansive history — and the threatened future — of the seedless, sexless fruit. 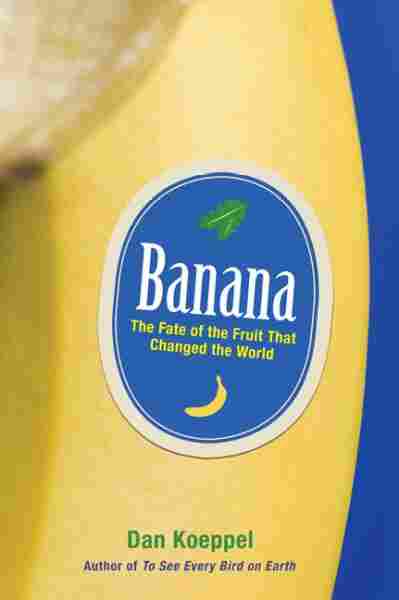 The Fate of the Fruit That Changed the World

This interview was originally broadcast on February 18, 2008.

Americans consume more bananas than apples and oranges combined. Dan Koeppel, author of Banana: The Fate of the Fruit That Changed the World, gives us a primer on the expansive history — and the endangered future — of this seedless, sexless fruit.

Koeppel traces the ubiquitous yellow fruit back to the Garden of Eden, where, he argues, it, not the apple, was the "forbidden fruit" that Eve offered Adam.

In the 20th century, he examines the United Fruit Company's maneuvering in the "banana republics" of Central America, and warns that the banana's unique reproductive system — each new fruit is a genetic duplicate of the next — makes it especially susceptible to epidemics.

"What's happening [now] with bananas is that they are being struck by a fungus called Panama disease that is incurable and that pretty much wipes out banana plantations within a matter of years," Koeppel says. "And what's really interesting is that the banana that's being struck was one that was believed to be and selected to be resistant to this fungus after the earlier banana crop, the one our grandparents ate, was destroyed by the same fungus about 50 years ago."

That fungus 50 years ago was a different strain. Today's version has made its way from Asia to Australia and is predicted to afflict banana fields in Latin America and South America within the next 10 years.

"It has not hit there yet," says Koeppel. "But every single banana scientist I spoke to — and that was quite a few — says it's not an 'if,' it's a 'when,' and 10 to 30 years. It only takes a single clump of contaminated dirt, literally, to get this thing rampaging across entire continents."

Dan Koeppel has also been published in National Geographic, Wired and Popular Science, and has eaten bananas on five continents.

On why bananas are susceptible to diseases

"Bananas are, for all their ubiquity — and it's the world's most popular fruit by far — are very, very vulnerable to a lot of diseases. And the reason for this is that bananas, the bananas we eat, which are called Cavendish bananas, are fundamentally clones of each other. There are no seeds. Every banana is grown basically by taking a cutting from one and turning it into another tree. So every Cavendish banana that we eat, every banana you eat, that I eat, that people eat in China and Europe, wherever, is exactly the same genetically as every other one. And just like human identical twins, what afflicts one afflicts the others."

"There's not enough land to grow enough organic bananas to make them a practical replacement for all of our supermarket bananas. That's because organic bananas, in order to fight disease, have to be grown at higher altitudes and cooler temperatures. That's the way it works. And there are just not enough high-altitude, cool-temperature places that are also hospitable to growing tropical bananas in order to make organic bananas a viable, you know, total replacement for those standard 69-cent-a-pound bananas you find in your local market."

On his favorite bananas

"There are some amazingly delicious bananas out there. My favorite is called the Lacatan. It's from the Philippines. And it's the — you know, banana enthusiasts, such as they are, many of them believe it's the best tasting banana in the world, and I would have to agree with that. It's got a very intense, creamy flavor. They're a red banana, and you do see some red bananas in gourmet stores here, which are related to the Lacatan. But they're quite inferior, although they're still better than Cavendish."

On the introduction of the banana in the United States

"The banana was introduced at the 1876, actually in Philadelphia, at the Centennial Exhibition. That's where it sort of had its coming out party to the masses. But this was a Victorian era, and the idea of eating a suggestively shaped banana was considered pretty uncouth. And there have been some other banana historians who've uncovered old recipes that show bananas must be cut and served in foil, anything to disguise their shape. And, as you know, you can't cut up a banana and, you know, let it sit for a few hours and serve it."